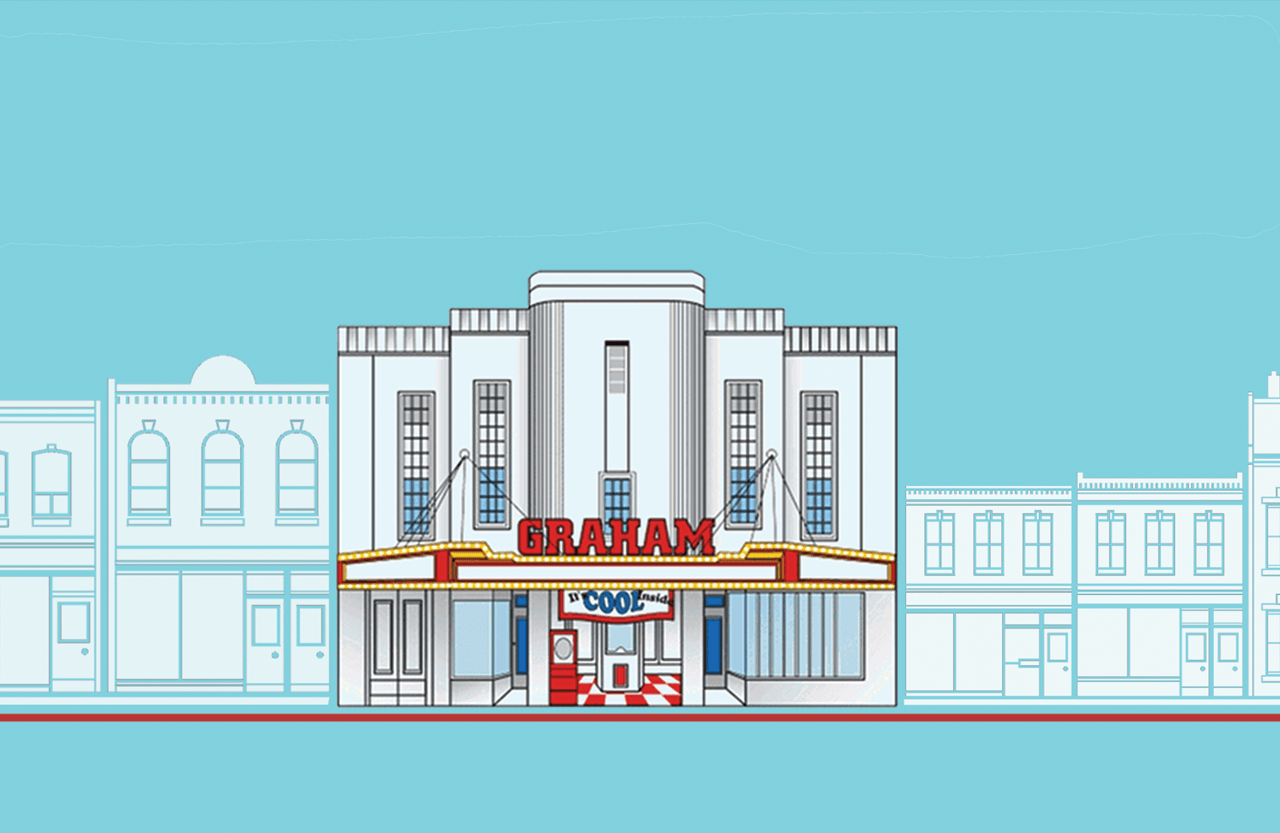 I recognize that calling a movie theater just to listen to its answering machine may sound strange, but trust me for a moment. Pick up your phone. Here’s the number: (336) 226-1488. Go ahead.

Thanks for calling the Graham Cinema, located at 119 North Main Street, Graham, North Carolina. All right, this week, we’ve got Now You See Me. All seats $4 …

If you haven’t heard of the Graham Cinema’s answering machine (a k a “Tim Bob’s Famous Joke Line”) before, it’s possible that you’re from Canada. Actually, people from Canada call the machine all the time. Same for people from New Zealand to France. Jay Leno has called in to listen, and so has Howard Stern — all to hear the latest homespun movie reviews, jokes, and local gossip from an old-fashioned, cash-only, small-town Southern movie palace.

The man behind the answering machine is Tim Matthews. Once a week, he sits down and records the message, no rehearsal, off the top of his head.

Morgan Freeman’s in this one. Jesse Eisenberg, Michael Caine — there’s some good ones in here! I enjoyed this movie. It’s pretty good; it’s different. It’s about magicians.

Matthews acquired the movie theater back in the ’80s. He set up the answering machine to relay the week’s showtimes. But the machine only took two kinds of cassettes: one-minute or three-minute. A one-minute tape wasn’t long enough, but a three-minute cassette had room to spare, so Matthews started tacking on his own personal movie reviews, plus any jokes or anecdotes that came to mind.

Now, I’ve got a friend who’s sort of a magician. He can walk into a restaurant and people start disappearing. That reminds me …

In person, Matthews is tall and ebullient. When he’s not talking, he’s fidgety. You get the sense that cracking jokes is his easiest mode of being. As a child growing up in Raleigh, he went to the movies every Saturday. “Mama would give us 30 cents apiece if we did our chores. We’d take the 30 cents — it cost a nickel to ride the bus downtown. Nine cents for the movie. Nickel for a drink. Nickel for popcorn. Another nickel to ride back, and then we had a penny left over to go down to the fruit stand.”

These days, Matthews is able to charge so little for tickets because most of his movies are second-run: releases that have already left the big theaters, and have yet to come out on DVD. And yet, his shows are packed.

Matthews knew he was famous when the mail got too heavy. Years ago, he mentioned on the answering-machine message that he was sick that week and wouldn’t mind receiving a get-well card. A few days later, the postman showed up with bags. They were stuffed with cards from around the world, many of them addressed, simply, “Movie Man, Graham, North Carolina.”

The secret turned out to be radio stations. Disc jockeys worldwide had been calling up the Graham Cinema’s answering machine and replaying Matthews’s movie reviews on the air.

Although Matthews still records his weekly message and oversees theater operations, he sold the theater to Chuck and Jennifer Talley about eight years ago. Chuck is a fourth-generation builder. He’d been coming to the Graham Cinema for years. According to Chuck, Matthews just informed him one day that Chuck should buy the theater from him, to keep ownership in Graham, with the understanding that Matthews and his sons would stay on to run the place.

“If you come to this town at night,” Chuck says, “and the theater’s open? There’s not many open parking spaces. We have nightlife here all because of what Tim’s done.”

My wife is the one who introduced me to the joke line. She and her friends used to call up in high school to hear Matthews’s reviews — not only for their entertainment value, but also for their candor. I mention that to Matthews.

“I’ll tell you what,” he says. “When we had Ishtar, that thing was a bomb. I said on the machine, ‘Ladies and gentlemen, this movie sucks. It’s horrible. There’s three days left on it and I’m just embarrassed to charge you, so come on in for free.’ ” He laughs. “But nobody came anyway.”

Movie theaters long ago pulled up stakes from Main Streets. They migrated to the shopping malls, to the chain-store shantytowns. But downtown Graham has life to it. There’s a soda shop and grill. A bar and a small-town barber. And, of course, the theater. Businesses where neighbors actually rub elbows, the sort of places that don’t just make up a town, but build community.

I asked Chuck and Matthews why people visit their theater. Chuck said it was the satisfaction of getting out of the house, watching a good movie on a big screen, laughing or holding your breath with everybody else in the room.

Every time I’ve called the answering machine, the message invariably ends the same way: Come on down to Graham and check us out. We’ll love to have you.