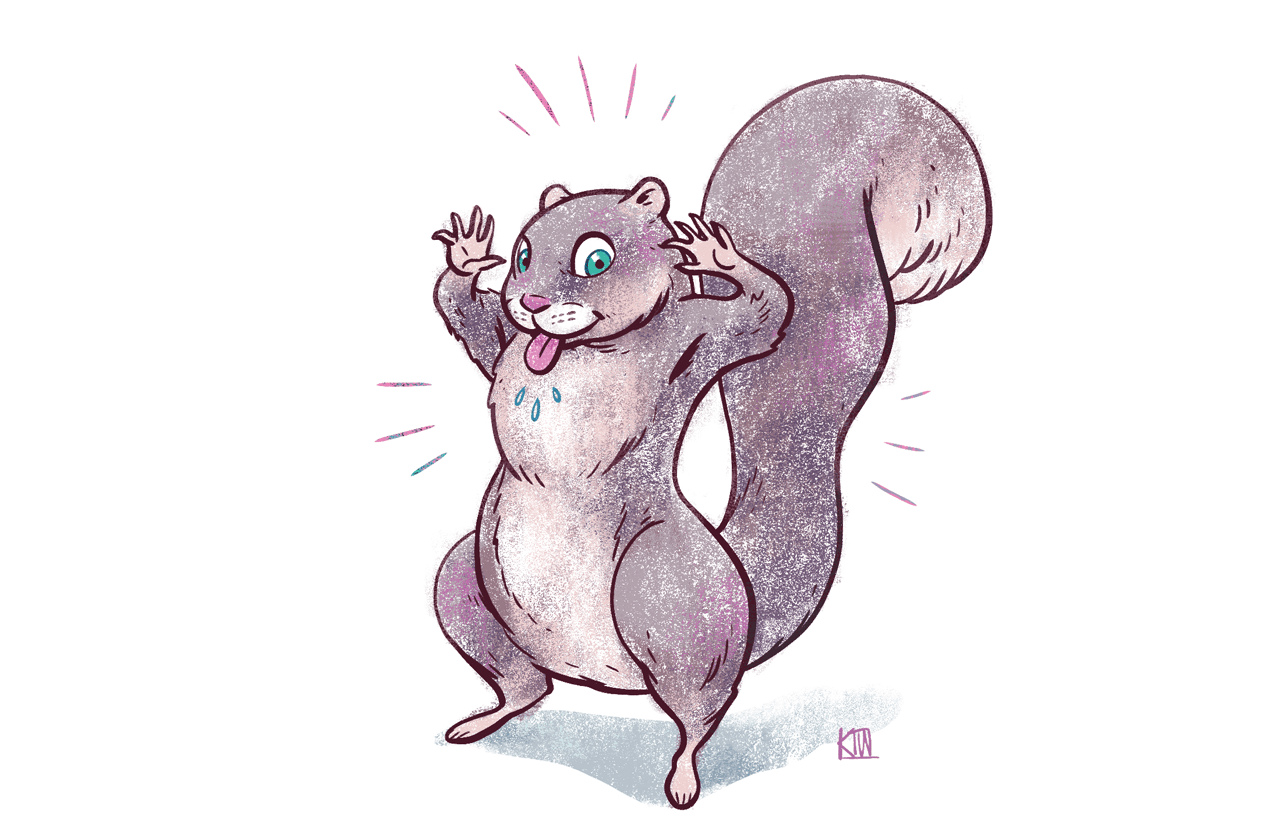 I mean, there oughta be a law.

You know I’m right. It’s an exalted position for a fairly lowly animal — I mean mammal. The last time I thought a squirrel was cute and furry was when I was a child, and my father, who traveled frequently to New York City on textile business, occasionally brought me presents. These gifts varied between the latest soundtrack for whatever musical was playing on Broadway and a miniature Steiff stuffed animal, complete with name tag. I played house with this menagerie, a peaceable kingdom of tigers, porcupines, owls — and squirrels.

It could be argued, however, that squirrels are unfairly underrepresented in the public domain, and this fact should’ve been a red flag for the General Assembly. Do you know a team named the squirrels? Do you know any state product — from barbecue to honey — that uses a squirrel as its logo? If you’re a state park and the main animal you can flaunt on your wildlife visitor board is a squirrel, then … I know; I’ve been to one, and no, I’m not telling which park I’m referring to. My uncle’s nickname is Squirrel, but he had buckteeth as a child. See? Not a positive reference.

Let’s move from mild slander to actual facts. The eastern gray squirrel (Sciurus carolinensis) is a prolific, adaptable species found in the eastern swamps to the western hardwood forests of North Carolina. In other words, it’s ubiquitous. The genus, Sciurus, is derived from two Greek words, skia, meaning shadow, and oura, meaning tail, which alludes to the squirrel sitting in the shadow of its tail. The specific epithet, carolinensis, refers to the Carolinas, where the species was first recorded and where the animal is still extremely common.

But you knew that.

And it’s probably no coincidence that the Latin word bears a strong resemblance to scurrilous, meaning insulting, abusive, wicked, defamatory, outrageous, and libelous.

Oops, I did it again. Slander, I mean. So here are two friendly adjectives: Frisky. Playful.

Squirrels eat acorns, fruit, even trees, and are rapacious, mindless eaters like my husband, who continues to consume pretzels as I’m spooning green beans onto his plate. Squirrels raid bird feeders, too, and I’m amused by those products that cater solely to squirrels, such as six-packs of horse corn impaled on nails. I buy products that cater solely to anti-squirrels, such as the Confounder, a metal collar that hugs my bird-feeder pole precisely to prevent these pests from getting at the seeds meant for cardinals. The squirrels are consigned to grovel at the base of the feeder with the poor dumb mourning doves.

Eastern gray squirrels are crepuscular. I always assumed that word had to do with neck skin going creepy, like Miss Havisham’s in Great Expectations, but no, it means they’re more active during the early and late hours of the day, and avoid the heat in the middle of a summer day. That explains it. I miss them terribly from 11 a.m. to 3 p.m. in July and August. Squirrels don’t hibernate in winter. No, they’re too busy consuming the two dozen tulip bulbs I planted. Predators include humans, hawks, weasels, raccoons, cats, snakes, owls, and dogs. But not enough of any of them.

Gray squirrels can live up to 15 years, otherwise known as a small eternity. My question is, if they’re already gray, how can I tell if they’re old?

Other fun facts: The species has a repertoire of vocalizations, including a squeak, a chatter, and a raspy mehr mehr mehr, and when all else fails, they’ll flick their tail.

Not touching that one.

Their nests — those masses of leaves and twigs in the forked branches of your poplar trees — are called “dreys,” and the eastern gray squirrel is a scatter-hoarder, meaning it hoards food in small caches for later. In this way they’re similar to me with Halloween, Christmas, and Easter candy.

Still, it’d be awfully convenient to be able to descend a tree head-first like squirrels do, handily turning their feet so the claws of their hind paws point backward to grip the bark. Best of all, squirrels are the perfect means of teaching by example. When one was lying on the pavement, flattened and gutsy — and not gutsy as in brave — I’d point and inform my children, “That’s what happens if you go in the street.” I admonished my newly licensed children, “Never brake for a squirrel,” though I refrained from adding, “There’ll always be another one.”

In the end, one is left to wonder how the possum was omitted from the short list of state mammals. Somewhere, a depressed, deprived possum is rolling over in its … well, on a double yellow line. Which explains why squirrels prevailed as state mammal. They live long. And, they’re cute.