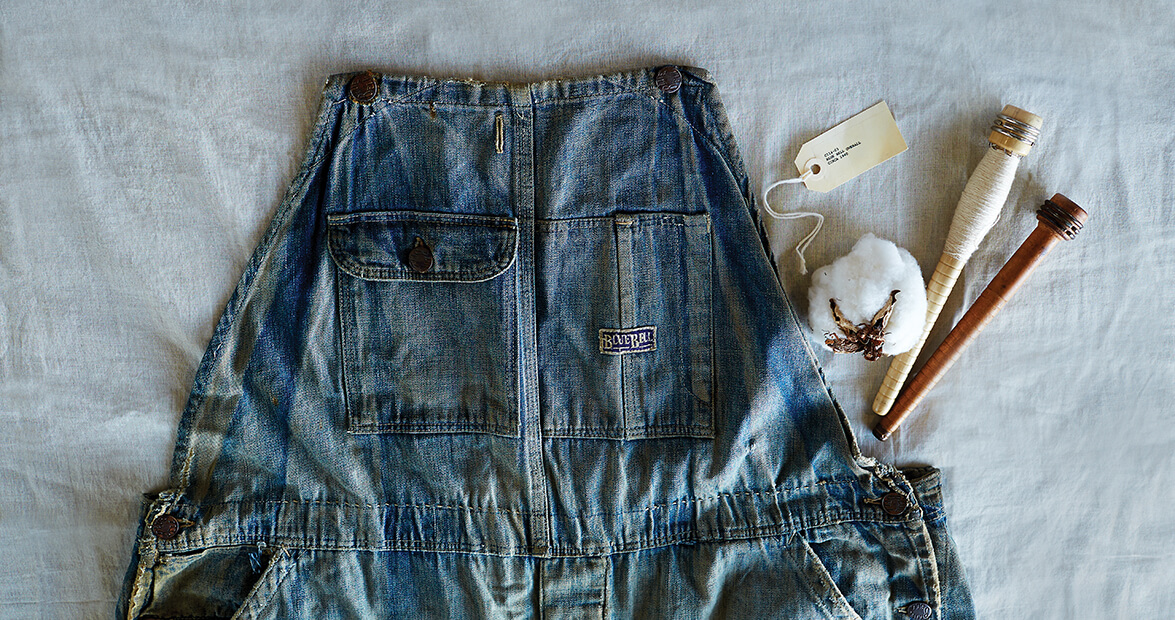 In front of him was a two-room shack. It had to have been more than 100 years old. Sharecroppers had lived there. Inside was the detritus of life in the 1940s and ’50s. Magazines and yellowed papers were scattered about. The room’s ceiling had fallen in, leaving the contents of the attic bare on the floor: a pile of denim.

Overalls. Chambray shirts. Waist-highs. A quilt. They were patched. Faded by the sun. Worn. Men’s. Women’s.

Harlon thought about giving the items to his sister. Maybe she could make them into vintage purses, which would probably sell well at the flea market. He looked a little more closely at the labels. “Made of Cone Deeptone Denim,” they read. Harlon’s grandmother had lived in the company village around Cone’s Proximity Mill in Greensboro. Maybe Cone would be interested in this stuff, he thought. 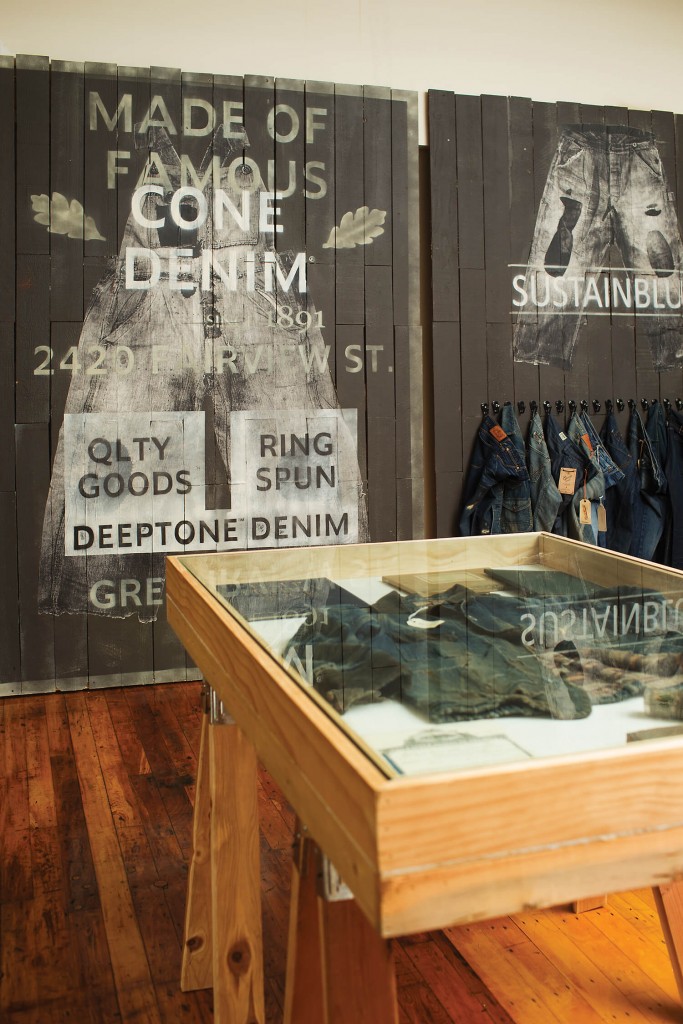 Today, the 40 pieces of clothing Harlon discovered in the woods make up the Found Collection on private display at Cone’s White Oak Mill in Greensboro: Big Winston Overalls from the 1940s, Big Dad Overalls from the 1950s. The jeans and shirts bear labels — Old Hickory, Belk’s Red Camel, Blue Bell, Red Ram, and Anvil. Each piece says something about the person who owned it. You can see the X on the back of an old shirt, where the overalls kept the sun from bleaching it. Some pants have holes in the knees. Missing pockets. Tears in the seat that were sewn shut. When the garments wore out, their owners didn’t throw them away. They fixed them. In an era when most people might, at most, be willing to sew on a button, it seems odd that clothes were fixed instead of thrown out or turned into rags. But that’s the thing about denim. It was never supposed to be fashion. It was only supposed to be tough.

Today, more than 500 denim mills in the world are in operation, with more than half in China. Only four are located in the United States. Cone Mills, which was once the largest supplier of denim to Levi Strauss, and which has never stopped churning out that twill, still sits in a huge complex on Greensboro’s west side, where both the neighborhood and the mill were named for the white oak tree that once grew outside the sprawling factory. In the 1970s, 2,800 people worked there. Today, fewer than 300 do. In many ways, the factory’s worn out, like a pair of old Wranglers.

But old habits die hard. The process at Cone hasn’t changed. The denim in those old clothes in the sharecropper’s shack was manufactured the same way it is in a pair of vintage Levi’s or a handmade jacket at Raleigh Denim. Cone, 110 years after it opened, is still churning out sheet after sheet of high-quality selvage denim on old mechanical looms that make the wooden floor vibrate. The company that made the looms at Cone has long since gone out of business. If a part breaks, Cone has to find someone who can fabricate a new one.

It’s an old-fashioned method; a slow method. But with denim, a little patience can lead to something that lasts.