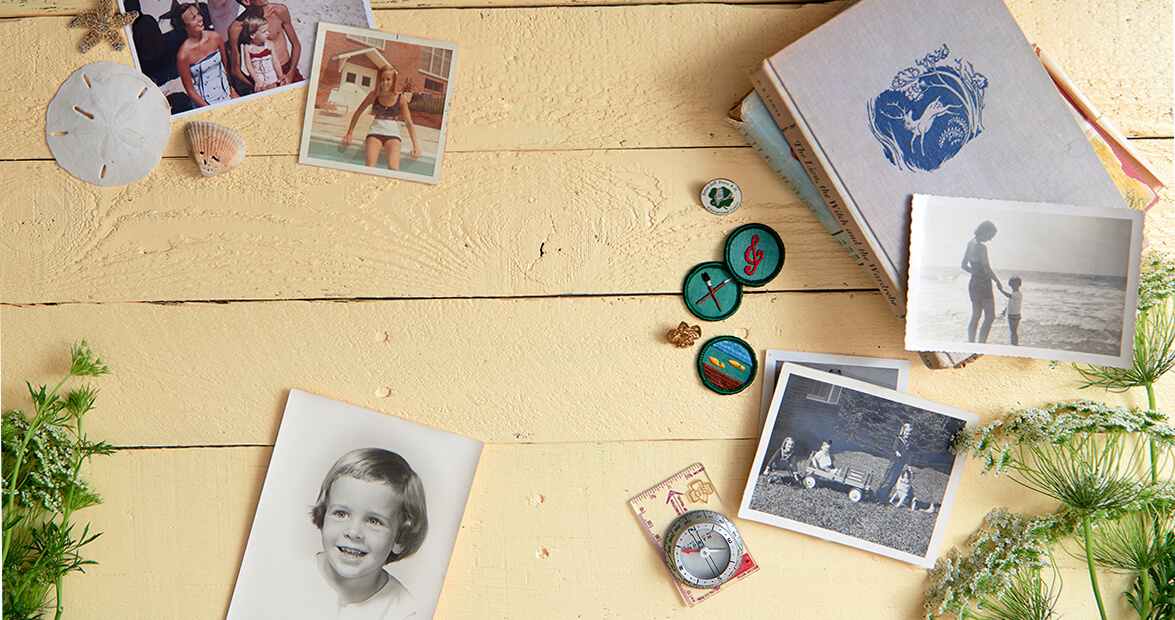 After you’d cashed in the bottles littering a construction site and you’d checked for a Buffalo nickel; after stripping the red plastic circle from the bologna slice, and eating the cherry Popsicle your mother halved against the kitchen counter seam; after the squabble when someone cheated at Mother, May I, there was always the dog. You pulled off a tick the size and pearl-gray color of pea gravel, poked it with a stick, then watched the bug wrinkle and deflate. Then it was still just early afternoon in a North Carolina childhood, which also included learning to plait with water-lily stems, feeding lettuce to adopted box turtles, batting hickory nuts with the broken-off end of a croquet mallet, and trying to see if a magnifying glass could really start a fire. Except that you didn’t have the patience to find out.

A North Carolina childhood included agonizing decisions: at Tweetsie Railroad, between the braided rawhide whip and the miniature wishing-well bank made of wood, so lacquered that you could see your own reflection. Or, Down East, between the hermit crab and the Venus flytrap, which seemed, frankly, to have more personality, despite being a plant. It was stubbed toes and skinned knees and poison ivy, the only treatment for which was calamine, which you surreptitiously peeled off in flakes when it dried, the better to get back to the satisfactory, single-minded business of rash-scratching.

In hindsight — because, alas, who’s aware of childhood while they’re living it? — much of a North Carolina childhood is based on school and seasons. During the school year, you went to Raleigh on a class field trip, where the Kleenex sprouting from the wall in a motel room was more wondrous than the State Capitol building. You learned the correct answer to grammar exercises like “(Our/Are) house is made of bricks” and, in assemblies, hollered more than sang, Hoo-rah! Hoo-rah! The Old North State foreverrrrrr!

On vacations, you opened your eyes for the first — and last — time in the salty Atlantic. You visited the Biggest Sand Dune in the World at Jockey’s Ridge, and the Sanitary Fish Market and Restaurant in Morehead City, feeling suspicious about the name until you sank your teeth into a hush puppy and knew you’d experienced a tangible, tasteable miracle of crunchy/soft, salty/sweet. You went to Vacation Bible School and made fans with tongue depressors and were allowed the unholy privilege of running a lighter along the edges of your “papyrus” scroll to blacken them. You threw your (empty) baby bottle off Blowing Rock because your grandfather promised $25 if you’d give it up before first grade. At Oconaluftee Indian Village, you crouched on a dirt floor inside a teepee, squatting like my father said they had in Okinawa, ears beside knees. I remember Fontana Dam only because I was wearing the slip-on sneakers I’d craved for so long.

A lot of childhood is wanting something. Wanting a name like Louisa or Angela, something with a pretty vowel on the end rather than a useless, unfeminine consonant. Wanting to twirl corn on the cob across the stick of butter rather than using a knife. Wanting whipped cream that came out of a can, and to be on a Christmas parade float.

A North Carolina childhood is warnings, too: that swallowed watermelon seeds will grow in your stomach, and that swallowed gum will clog it up. So you went to sleep with Juicy Fruit still in your mouth and, in the morning, used an ice cube to freeze it out of your hair.

Childhood is picking: blackberries and Queen Anne’s lace on the side of the road, tomatoes and squash from the garden, guitar strings and elbow scabs. It’s kicking: a ball in the side yard, and your sister under the table. If you’re a North Carolina kid, you sell: lemonade and found golf balls and handwritten neighborhood newspapers. You build: dams and tree houses and skateboard ramps. You collect, too: birds’ nests and arrowheads, sharks’ teeth and mica shards. You earn: allowances and good grades and scout badges and 4-H awards, but never the DAR prize. And you learn: sailing knots and saddling a horse, how a bill becomes a law in Raleigh, and how to make a dog play the banjo with his hind leg. If you’re lucky, you learn the two-finger whistle in childhood, but if not, you learn to coax a reasonable shriek out of a blade of grass between your thumbs. You learn, as well, about grieving. For dying pets. Grandparents. Summer’s end.

For me, childhood’s end arrived one day in the mail: a reading list for ninth grade. That summer, I traded Frances Hodgson Burnett’s English orphans for Charles Dickens’s vastly different versions, swapped Narnia for The Good Earth’s China, and abandoned the little house on the prairie for Nicholas and Alexandra’s Russia. And yet.

“Anybody who has survived his childhood has enough information about life to last him the rest of his days,” Flannery O’Connor wrote. So it is, surely, for every grown-up North Carolina child, when they remember their first awkward attempts at snowplowing on Beech Mountain, climbing cherry trees in spring to knock down webby caterpillar nests to play with the dozens of squirming creatures, or coming upon a kitchen sink full of floating cucumbers on their way to becoming pickles. If you can’t remember, just put your nose to a whirring box fan, and talk. In that echoing, reverberating hum that once so delighted you, you’ll hear — faint but definite — those brief years you believed forgotten.