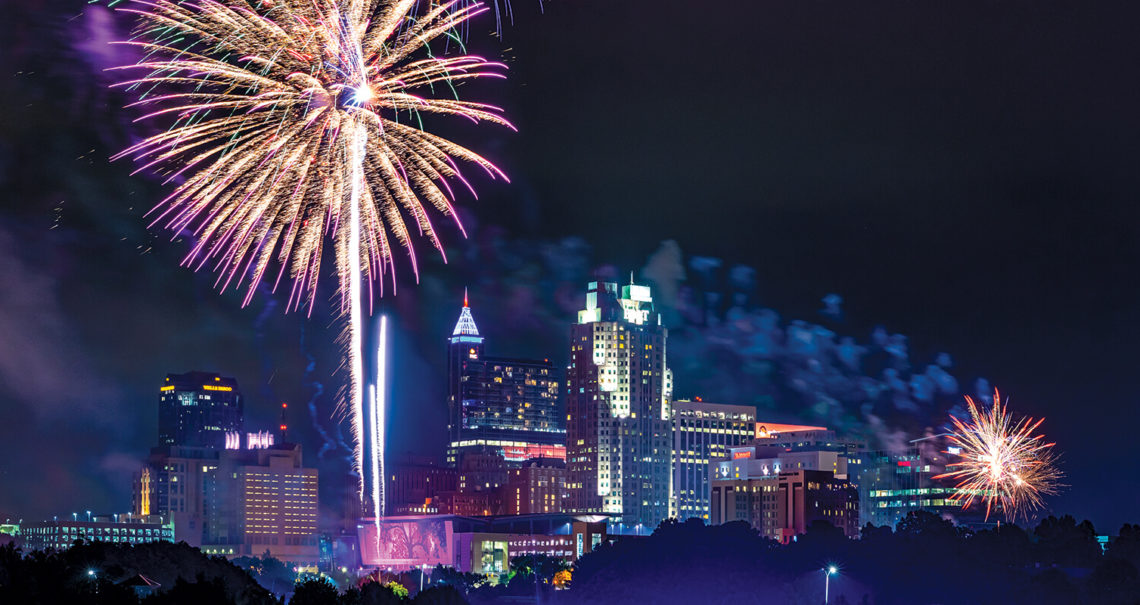 There was always watermelon. I do remember the fires streaking across the sky, the great explosions of floral bouquets that blotted out the stars, the chorus of oohs and ahhs from the crowd below. I remember the blankets sticky with melted ice cream and arms sticky with bug spray, the cinders drifting down and the air smelling slightly burnt. But I also remember the watermelons. There were so many slices of watermelon at High Point’s Emerywood Country Club Golf Course that it seemed as if some of those kaleidoscopic rockets had been packed into 15-pound oblong fruits and launched into the night to explode into the perfectly carved wedges that littered the lawns where we sat.

Everyone has their cherished memories of childhood fireworks. I certainly remember the aerial displays, but I can’t shake the image of all those scimitars of watermelon, lying in red and green repose across the fairways.

As a child, lying on a blanket, tangled in a parent’s arms and legs, we’d watch the sky turn to fire. It wasn’t until years later that I understood how a fireworks show is a choreographed dance of light and color and a bit of danger for those tiny human silhouettes who light the fuses in the distance. We just focused on the pageant overhead.

The giant, lacy, spiderlike glitter fireworks are called brocades, and they burn with seemingly everlasting tails. Chrysanthemums are the frilly, exploding flower heads. Comets rise with tails on fire. Tourbillions spin like crazy, showering sparks in Saturn-like rings. The magical pistils are a crowd favorite, spherical balls of stars inside other balls of stars. I especially liked the falling leaves, the embers that drifted slowly toward earth, flickering and flashing, and I would watch the brightest all the way in its descent, wondering if it might touch the ground. Another favorite we called the screamin’ meemie. The rocket rose high overhead, comet-like, then vanished for a heart-stopping moment, as if it had misfired and fizzled out. But no! Suddenly, there were whirling snakes of fire overhead, the sky like Medusa’s hair. Each tendril writhed and twisted, then exploded in a flash and bang.

The sky explodes in light. The sparks fade, and the crowd holds its collective breath.

Who could not love a screamin’ meemie?

Once I got a little older, into my later teenage and then college years, I don’t remember going to the fireworks very often. It certainly wasn’t the destination it had been when I was a child. If you had a girlfriend or boyfriend, you’d go to the Fourth of July fireworks because it seemed like a Significant Other thing to do. Otherwise, the displays became just another part of a weekend at the lake or the beach. Something we’d watch out of the corner of our eye, almost, as we polished off the last hamburger from the grill. Fireworks, it seemed, were for kids.

And then, suddenly, there they were: kids. Our own children, in fact. (Where did they come from? How did this happen?)

Once Julie and I had kids of our own, the role of fireworks in family life was instantly renewed. It was one more example of how parenthood is in many ways a second childhood. Hot Wheels? Holy moly, why did I ever quit playing with those? And who knew there were three new magically delicious unicorns in Lucky Charms? Family size, please!

Our fireworks tradition was to head to the golf course at the North Carolina State University Club on Hillsborough Street, almost next door to the State Fairgrounds. There, we had a stunning view of perhaps the biggest fireworks display in the state. We didn’t have to park and walk a country mile. We just holed up at the University Club all day, swimming and playing Fourth of July staples: the greased-watermelon swim (ahem, club champion, circa 2011), the cannonball contest, and the sack races.

Then, as the light fell, we’d all drift over to the westernmost edge of the golf course and spread out blankets and beach towels. There would be bug dope and dripping ice cream cones. And watermelons, of course. We’d watch the horizon like sailors watching for shore.

Scientists say that one reason we find fireworks so appealing is that they stimulate a little knot of nerves in our brain called the amygdala, which helps process fear. The thinking goes like this: The flash of light in a Fourth of July comet or chrysanthemum jolts the amygdala into instant high alert. Something has happened, our brain says. Something is coming. Then, the skyward crack and sizzle and pop of a screamin’ meemie confirms to the brain that it was right all along. Something was coming, but it wasn’t so bad after all. At that moment, the brain rewards the body with a little dose of dopamine, the chemical released when we’re happy. A little bit of fear, it turns out, isn’t so bad after all.

Which is a pretty unpoetic way of thinking about the allure of fireworks. But there’s something deeper than brain chemistry in that cycle of expectation and reward, something emotional, as well, that plays out in the one-two punch of light and sound. We know it’s coming. We draw close to our loved ones and settle a calming hand on our children.

And we watch, surrounded by watermelons. The sky will explode in light. The sparks will fade and trail away into embers and contrails of smoke, and the crowd will hold its collective breath. We’re all waiting for those first few embers of orange in the distance that signal another rocket on the rise, another comet with a tail of fire, another moment of wonder in the dark sky that reminds us that our flag of hope is still there.