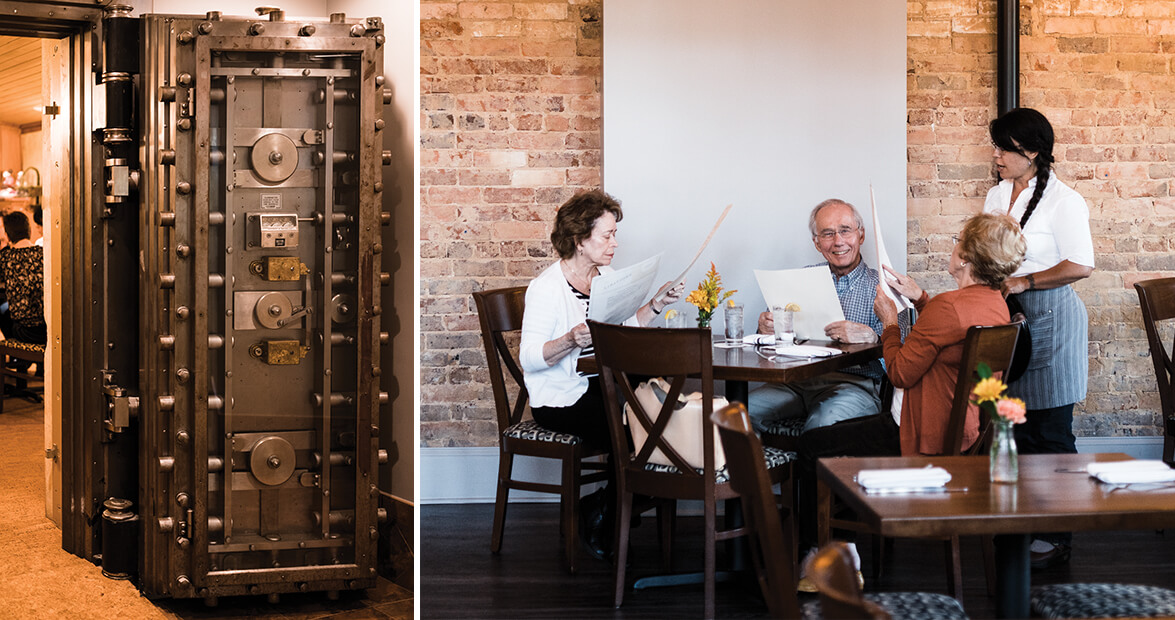 Chances are good that the architect Erle Stillwell never imagined wine filling the vault of the bank he designed in 1922. He dreamt up that three-story, limestone-detailed building in the growing mountain town of Hendersonville to usher in suited bankers and bags of money. But as a wise man once said: History is weird.

After the Depression closed the original bank in 1930, iterations of other banks took up residence for the next 75 years. Today, the yellow-brick building still stands stately and imposing on the corner of 4th Avenue and Main Street, the words “First Bank & Trust Co.” carved into its façade. Yet inside, much has changed. Gone are the teller windows and office walls, and in their place has sprung up the restaurant Postero.

Walk through Postero’s glass door, and you’ll enter a space that’s modern and open and minimalistic. Sharp lines draw your eyes to the balcony seating and into the giant windows backing the bar. But there are also subtle reminders of the building’s past: Edison bulbs strewing soft light upon exposed brick, and a bank vault door standing wide open in the back — displaying wine.

In both physical space and menu, Postero is an intersection of past and present. The restaurant serves “New American” — reenvisioned versions of classic dishes: pork chops and hoppin’ John, deconstructed chicken and waffles, goat cheese mashed potatoes. 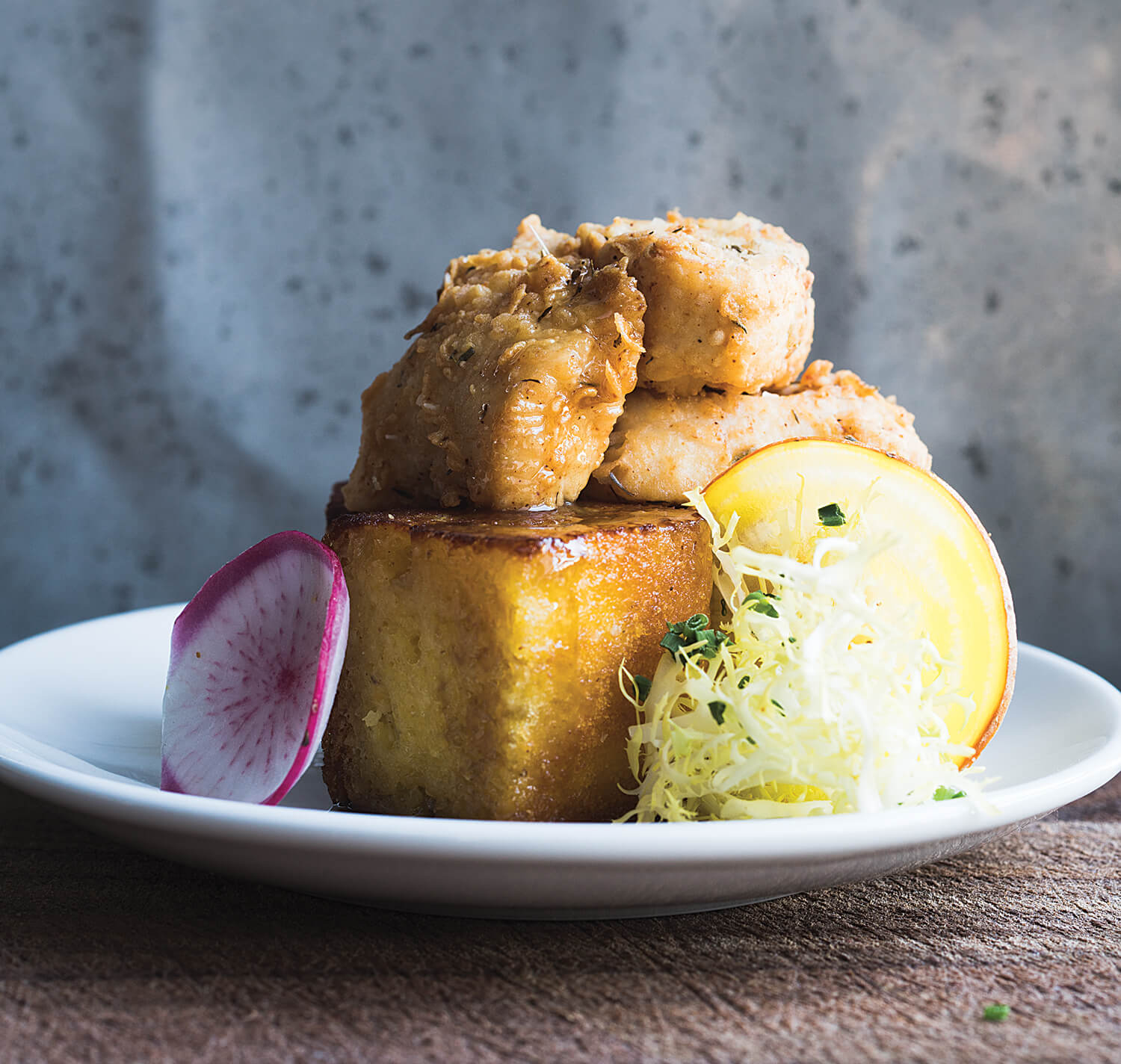 After spending years in other people’s kitchens, Jason Reasoner, co-owner and executive chef of Postero, knew he wanted to make something new and different in Hendersonville, “to create modern food with Old-World techniques,” he says. Doing this in a 93-year-old former bank seemed as good a place as any.

It’s easy to think of history as layers, generations lying atop generations. Take, for example, the space beneath Postero. When the building thrummed with bank-life, a whole world waited underground: shops, poker tables, a hair salon, a gentlemen’s club. Stairs led down, as if into a subway, from the sidewalk in front of the building.

Fifty years ago, when the city poured concrete over that underground opening, they left the skylights preserved in the sidewalk. They’re foggy and old, but if you’re of a mind, you could lie down right there on Main Street to try to catch a glimpse of the past underfoot.

But, of course, history doesn’t really stay buried, sealed in by concrete. The past creeps up from the spaces beneath and works its way into the here and now. Postero welcomes it up. The food, like the renovated space, is modern, but if you look closely, you’ll find that it’s full of throwbacks to another era — the ingredients locally sourced, the culinary techniques traditional, and the fare rooted in Southern cuisine.

The food, like the renovated space, is modern, but if you look closely, you’ll find that it’s full of throwbacks to another era.

On a Friday night, Postero hums. No walls separate the preparation and presentation of the food, so you can sit amid the buzz of diners in the balcony or on the main floor and watch the cooks in what Reasoner calls their “dance.” Dressed in white, they turn from griddle to counter, ever aware of their partners.

In fact, the most sought-after seats in Postero are front-row — B1 and B2, at the bar between the hot and cold kitchens. There, you’re practically a part of the staff, smack in the middle of the action: kimchi Bloody Marys whipped up to the left; duck confit sizzling in a pan in front; and a beet, feta, and hazelnut salad arranged to the right.

Reasoner always intended to welcome diners into his kitchen. He spent much of his career in country clubs, hidden from customers, but he traces his own love of food to being lured in as a child by the sounds and smells of his mother’s and grandmother’s kitchens. He hopes Postero’s open bustle will likewise tempt diners into new foods. Or new versions of old foods.

Here’s one: the chicken and waffles. On the menu, they receive quotation marks, followed by the qualifier “a loose interpretation.” The result is a plate filled with cubes of griddled cornbread and hunks of lemon-rosemary-brined fried chicken, backed by a rendered foie gras maple syrup (highly recommended).

Or this plate of Southern staples: chicken, cornbread, and collards. Postero’s version of the dish converts the cornbread into a bed of finely crumbled stuffing with matchsticks of sweet Henderson County apples mixed in.

Reasoner, a Hendersonville native, is forever in search of original flavor. To find it, he relies on his classical culinary training and his instincts as an adventurous diner. Often, this means drawing upon menus from around the world to make the food of home richer, fuller, and more alive. Cheddar-Gouda pimento cheese crostini, anyone?

In Hendersonville, it’s not unusual to think, from time to time, of Thomas Wolfe. The statue after which his novel Look Homeward, Angel is named stands in a cemetery not far from downtown. Driving past that angel might make you ponder the title of another Wolfe novel: You Can’t Go Home Again.

Jason Reasoner has come home again, to Hendersonville. He left this town in the ’90s, spent a decade in classes and restaurants along the East Coast, but then, in 2000, he returned.

For Reasoner, coming home means finding ways to mesh past and present to conceive of the future. It means learning more about the history under the sidewalk and in the attic, but also casting your mind forward, thinking of how the place, and the food, can be better.

Postero, Reasoner admits, wouldn’t have worked in the Hendersonville of 2010, but times are changing. Diners are hungry for new experiences, and Reasoner is already cooking up more ideas. (His secrets will remain secret for now, but here’s a hint: breakfast.)

As for Postero, he sees his restaurant as ever-evolving: “I’ve preached this since we opened the doors,” he says. “Where we started today is not where we’re going to end up.”

How’s that for a metaphor for home?