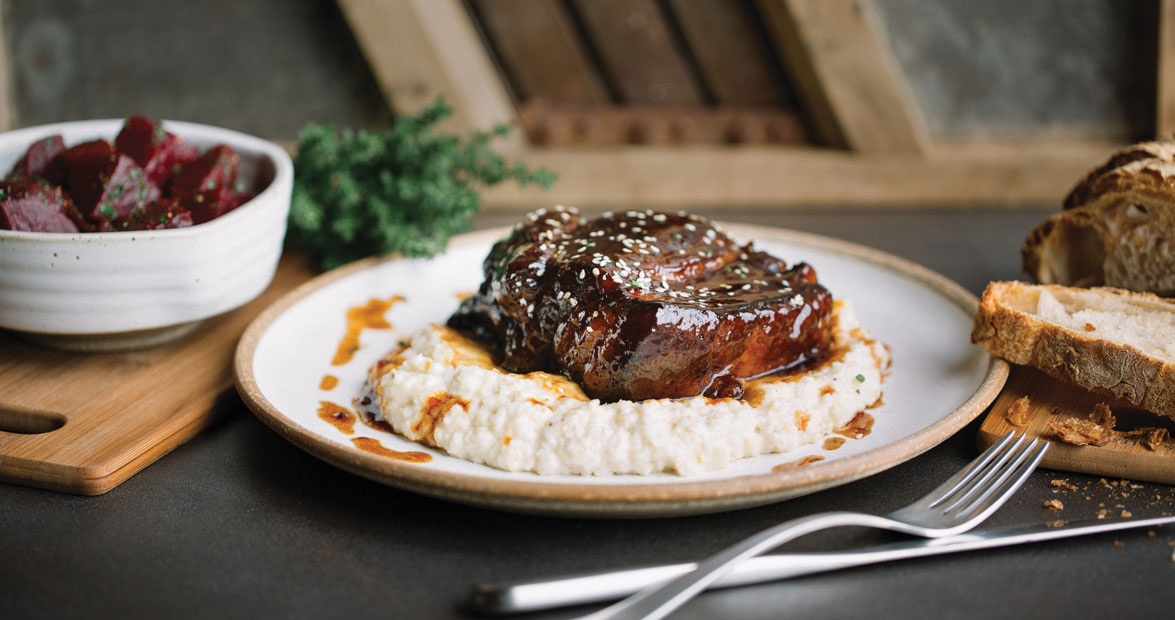 On a recent Thursday evening, Meg Jenkins Locke sat down for an early supper at Highland Avenue restaurant, surrounded by empty chairs — but she wasn’t alone for long.

Over the next few hours, Jenkins Locke was joined by a rotating crew of dinner companions that included her sons, Will and Robert Locke, with whom she owns the restaurant, as well as servers, event staff, and Executive Chef Sam Stachon. Each pulled up a chair, grabbed a fork, and tucked into dishes spread across the table, taking a few bites before passing plates piled high with vegetarian flatbread, fries topped with pulled pork and cheese, and green salads, jumping into conversations ranging from the new menu to local politics.

“We always had family meals at home, and I wanted to instill those traditions in the restaurant and make it a place where our staff and our guests came together to break bread,” Jenkins Locke explains. 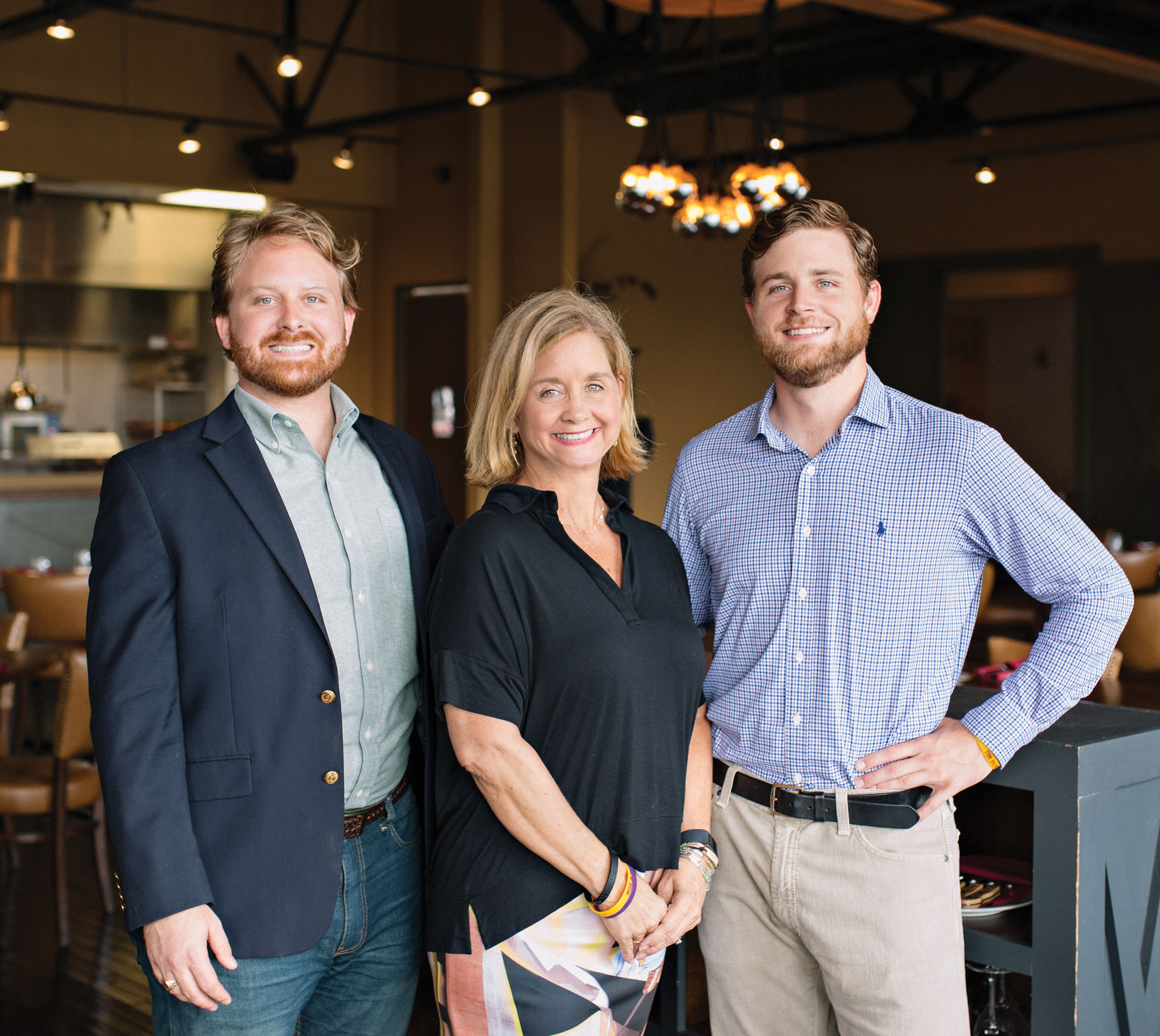 Meg Jenkins Locke and her sons, Will (left) and Robert, transformed a former hosiery mill into a bright and airy restaurant. photograph by Revival Creatives

The casual, pass-a-plate vibe didn’t happen by accident. Every decision, from refurbishing the old Hollar hosiery mill that houses Highland Avenue to designing the menu and partnering with local farms, was made with the singular goal of creating a space that was as welcoming to the community as their own dining rooms.

The dining room of Highland Avenue retains many of Hollar Mill’s original architectural features, including exposed brick, high ceilings, and oversize windows, with a gleaming commercial kitchen overlooking the space. As a nod to the restaurant’s farm-to-table ethos, jars of pickles, marinated cucumbers, pickled Swiss chard stems, chowchow, jam, and preserves — made by Stachon and Sous Chef Max Evans from vegetables harvested on local farms — line open shelves in the dining room alongside vintage mill-era antiques. 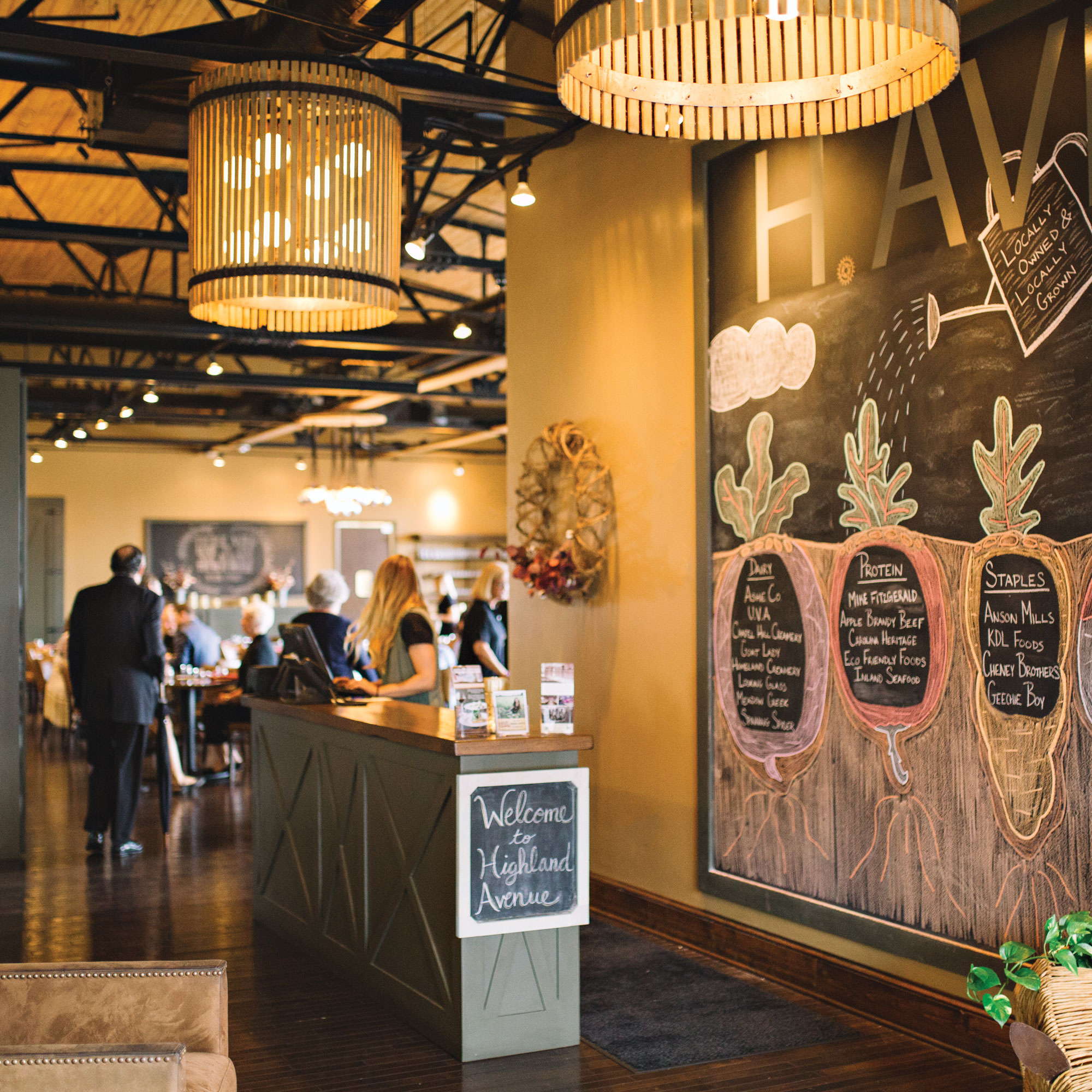 Highland Avenue is a former hosiery mill transformed into an airy restaurant. photograph by Revival Creatives

It’s a far cry from the first time Jenkins Locke saw Hollar Mill. At the time, the building had been abandoned since the 1960s. Sunlight streamed in through holes in the roof, the windows were smashed, and a tree was growing through the floor. Yet Jenkins Locke fell in love with the former hosiery manufacturer, and she made it her mission to bring the building back to life.

The restaurant has helped bring life to the Hickory community, too.

“We wanted it to be a catalyst project for the entire mill district,” Jenkins Locke says.

“This is a community of craftspeople,” Will adds. “We wanted to bring that craftsmanship with food.”

Launching a farm-to-table restaurant in a city where the culinary scene mostly revolved around fast food restaurants and national chains was an audacious plan. But it worked. Highland Avenue opened its doors in 2013 and quickly became a community favorite.

Local farmers were the first to champion the restaurant. “They were our warmest welcome,” says Robert, the general manager.

Highland Avenue sources as many ingredients as possible from farms within a 50-mile radius of the restaurant, including fresh fruits and vegetables from Tumbling Shoals in Millers Creek, meat from Apple Brandy Beef in North Wilkesboro, and dairy from Looking Glass Creamery in Fairview.

“For some of these farmers, we are their biggest account,” Robert says. “We’re really proud of that.”

The commitment to local sourcing extends to the bar menu, which features cocktails like the Sam Jam Margarita made with tequila, triple sec, lime, and seasonal jam, and the Farmer’s Shrub, which includes gin and Old North Shrubs handcrafted in Shelby.

Stachon, a self-described “bread head,” bakes conventional loaves such as sourdough and focaccia as well as cornbread baguettes and other experimental recipes. He also makes crackers, gnocchi, and pastas like tagliatelle in-house.

The signature breads are such an important part of the Highland Avenue menu that Stachon named each of the main players in the bread service, including Cornelius (cornbread), Silas (whole wheat), and Helga Von Rye (self-explanatory).

“We all talk to the starters each morning,” Jenkins Locke says. “We come in the building and pass the tray with the breads of the day and say, ‘Good morning!’”

Although Highland Avenue serves elevated farm fare, the goal is to make it feel accessible. Stachon describes the restaurant’s menu as “Appalachian classics with a twist.” Experimental dishes such as squash “rag tie” pasta with shishito peppers, red onions, heirloom tomatoes, and feta cheese are featured as specials, while those who prefer a classic meat and three can order sirloin steak or mountain trout — two of the most popular dishes — and sides like white mac and cheese, truffle fries, and Carolina rice.

Jenkins Locke believes all of the dishes were made to be shared. After the recent team dinner ended, she walked across the bustling dining room toward the kitchen, not a bit surprised to see a couple poking their forks into each other’s meals and taking appreciative bites.

“When we make a meal for someone, it’s an invitation to be part of who we are,” she says.

Jenkins Locke hopes the sentiment — and the food — is shared.