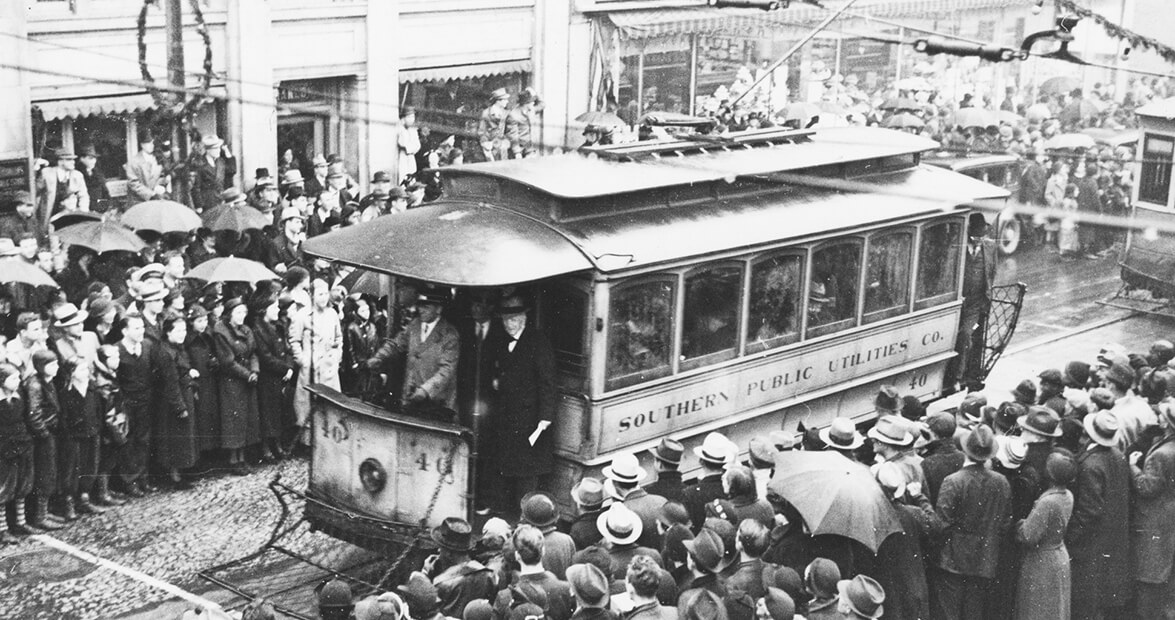 Somewhere in our collective imagination, we’re charmed by the tootles and clackety clacks, the bumping and the swaying, of a trolley. Think of Mister Rogers’ Neighborhood and the little red trolley scooting into the Neighborhood of Make-Believe. Think of A Streetcar Named Desire, whose protagonist speaks of the “rattletrap streetcar” banging through the French Quarter. Think of San Francisco, and the trolleys that track up and down those famously steep streets.

And think of North Carolina, long before the age of buses, light rail, and Uber drivers. In the waning years of the 19th century, on into the Roaring ’20s and the reeling ’30s, streetcars clanged their way through cities and towns across our state.

“It was widespread, but it wasn’t everywhere,” says Walter Turner, a historian recently retired from the North Carolina Transportation Museum in Spencer. Statesville, for example, never got on board, and Fayetteville, despite being one of the largest cities in the state at the time, only had a streetcar line for a short time.” 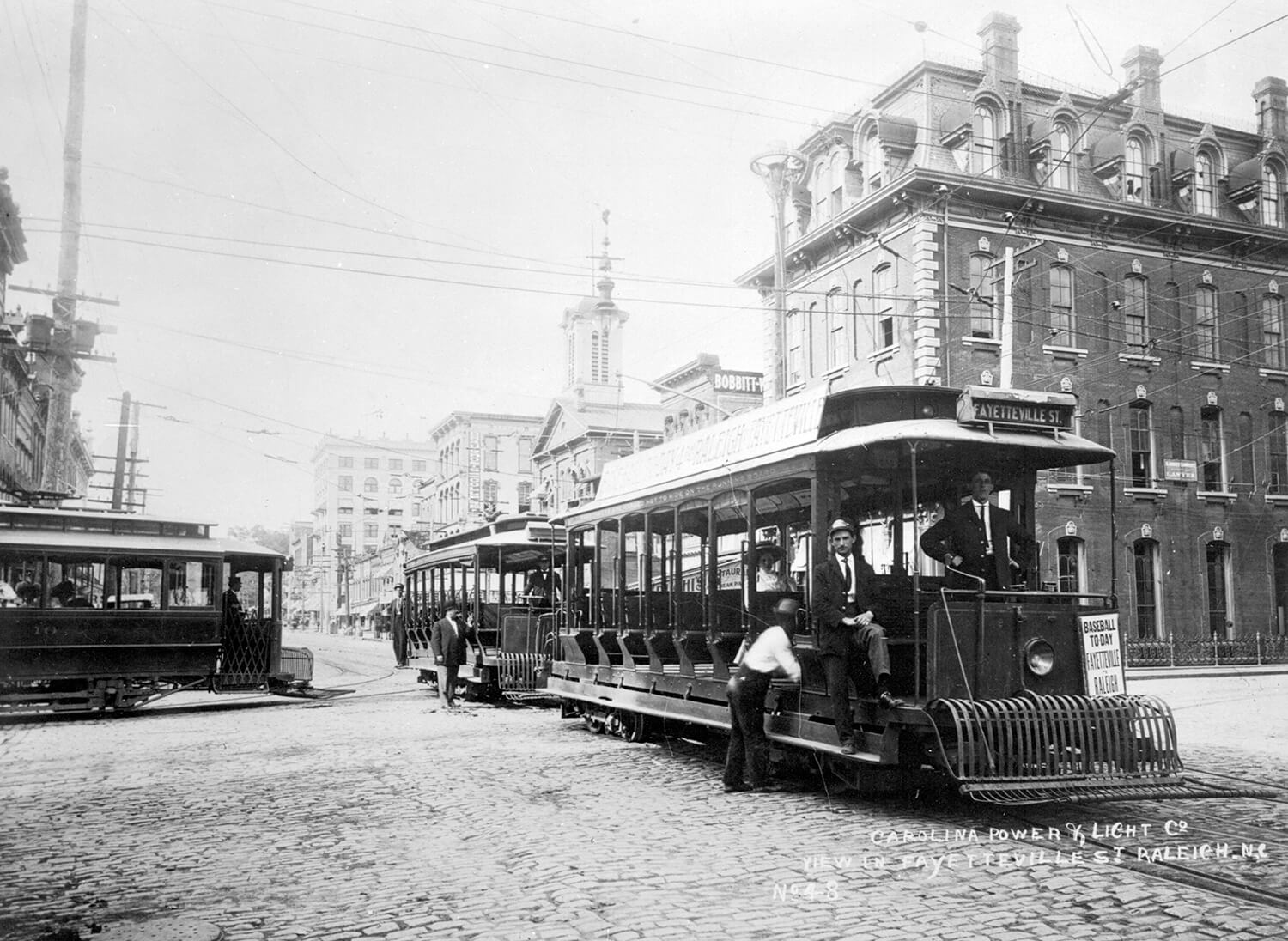 The ride began in 1881, when the North Carolina General Assembly chartered street railway companies for Raleigh and Asheville. In the early years, streetcars were powered by mules and horses. On Christmas Day 1886, the Raleigh Street Railway Company opened the state’s first trolley system, using four cars towed by two Texas mules on four miles of track. Thousands of people swarmed the streets to watch these newfangled contraptions clatter down the rails. This holiday beginning marked a new era: Instead of going downtown on foot or in an open-air buggy, exposed to sun, rain, and dust, you could hop aboard a sleek trolley.

The following month, Charlotte rolled out its own trolley system. It had three cars, each carrying a dozen passengers and drawn by two horses. Other towns statewide soon had their own mule- or horse-drawn trolleys. But with electricity rapidly lighting up the American way of life, horses and mules were ultimately exchanged for overhead electric cables. “That opened up a whole new world,” Turner says.

Asheville had opened up to the wider world when the railroads came through from Salisbury (in 1880) and Spartanburg, South Carolina (in 1886). Until then, it had largely been an isolated mountain town. But for all its ruggedness — streets had 10½ percent grades — Asheville became the state’s first city to build an electric streetcar system. The line ran from what is now Pack Square in downtown to the railroad depot west of Biltmore Village. It opened on February 1, 1889, before a large crowd that burst into cheers.

“Asheville is due a lot of credit for being the first one in the state,” Turner says. Winston became the second town with an electric trolley system; the tracks connected to neighboring Salem, further linking the two towns that would merge in 1913.

Before long, Charlotte, Raleigh, and Wilmington opened their own electric streetcar lines. “That was very significant for the growth of those cities, because that was before the growth of the automobile,” Turner says. “Those communities were the first to establish recreational parks and suburbs.”

Take Charlotte: Edward Dilworth Latta and five entrepreneurs built the Dilworth neighborhood about a mile and a half south of the city center. The businessmen paid the Edison Electric Company to install an electric streetcar line along the old horsecar tracks, linking Charlotte’s center to the new neighborhood. “At the time that it opened, it was considered way out on the edge of the city,” Turner says. The trolley began operating on May 18, 1891.

Raleigh launched its electric car service on September 1, 1891. Ever the rival with Charlotte, the capital city had its pride dented by the Queen City’s four-month head start. Tracks ran west along Hillsborough Street out of downtown; north on Blount Street to near Oakwood Cemetery; and south on Fayetteville Street before following Cabarrus Street west to the railroad depot.

In a 1987 story in the Raleigh Times, J.W. “Willie” York described the joy of gallivanting around Raleigh on the streetcars as a boy. With a speed of 30 miles per hour, the trolleys sure “beat horse and buggies,” he recalled. “And it was very economical. You could ride all over town for just a nickel.”

People rode the trolleys to the office, to the department store, to the ballpark. Ridership generally dwindled during weekends, so to get people on board when they were off work, electric companies built amusement parks at the ends of trolley lines. Carolina Power & Light Company opened one such park in Raleigh in 1912: Bloomsbury Park featured a penny arcade, a three-quarter-mile roller coaster, a boating pond, and the carousel that now stands at Pullen Park. 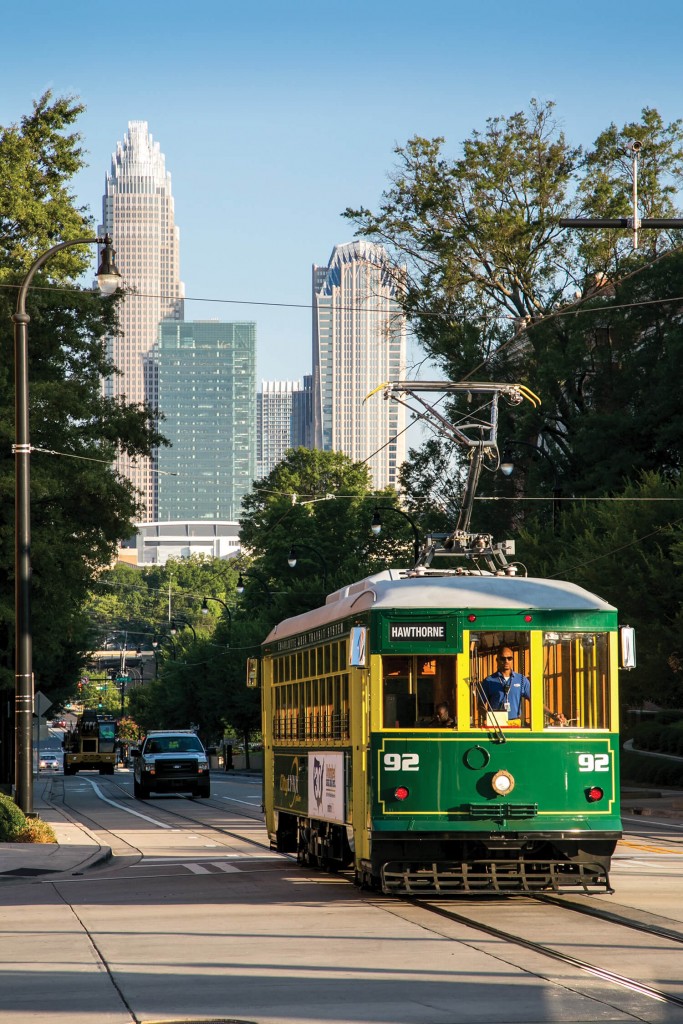 Streetcars hummed along in Raleigh until 1933, when buses — and the almighty automobile — put the brakes on trolleys. Charlotte continued the ride until 1938. Tracks were paved over and overhead electric cables yanked down. Streetcar travel had peaked nationwide in 1917, with 45,000 miles of track; but in 1939, only 2,700 miles of trolley track remained in American cities.

By 1948, with Gastonia the last holdout, streetcars had all but disappeared from North Carolina. Still, nostalgia couldn’t let them be gone for good: This past July, Charlotte celebrated the opening of the $37 million CityLYNX Gold Line, the first 1.5-mile stretch of a 10-mile streetcar system. Three replica trolleys now run daily along Trade Street and Elizabeth Avenue, making six stops. It’s the first time in 77 years that streetcars have plied the streets of Charlotte.

Somewhere in our collective imagination, streetcars are still in style, still a joyful, viable means of getting around town. Think of clacking along beneath the glassy towers of Uptown Charlotte. Think of sipping coffee while warming a bench and watching the world stream by outside your window. Think of the tinkling of the bell and the grinding of the wheels. How can we not be charmed?