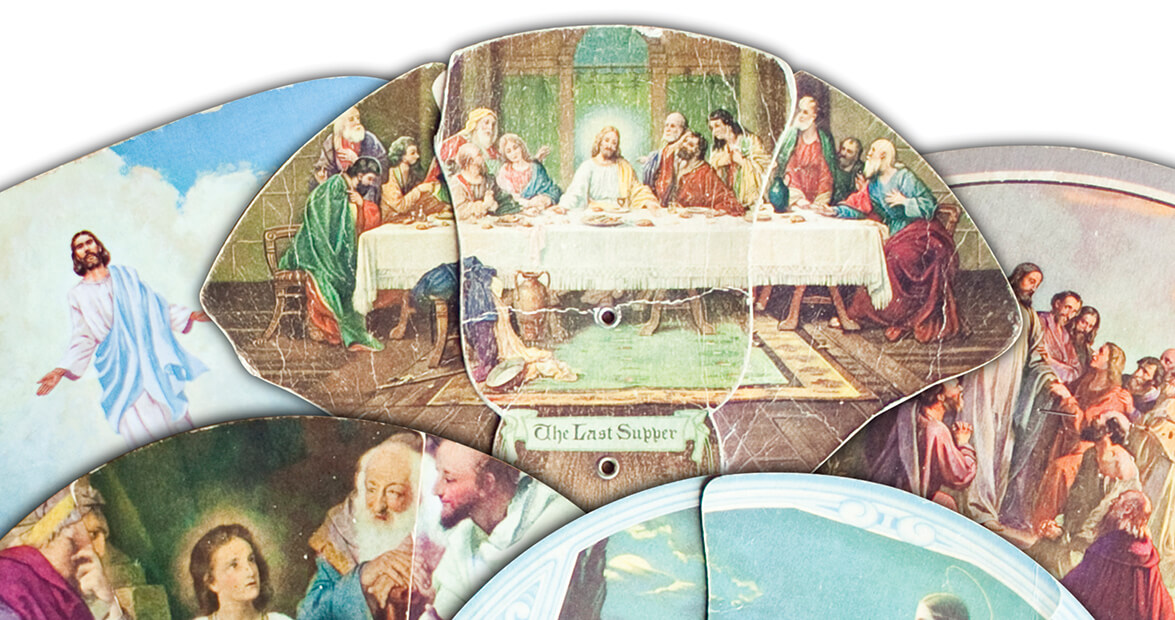 Jesus was floating, and 3-year-old William McNeill wanted to know why.

Seated in the family pew at Singletary United Methodist Church, William had on his Sunday best — a pressed white shirt and a clip-on bow tie. He held in his small hands a church fan to keep the summer heat at bay.

He stared at the picture on the fan.

But he had never seen Jesus like this — floating, arms outstretched, clouds behind him, high above the heads of men and women below.

It was a mystery, and he was curious.

More than five decades later, an older, wiser William McNeill recalls that day with ease. It was a simpler time. Since then, McNeill has filled a passport. He’s been to five continents. He’s studied the tango in Argentina and explored the architecture of Morocco. Regardless of how far away he found himself, memories of church and childhood in Bladen County in the 1950s remained with him.

There were the youth choir practices where the words of “Nearer, My God, to Thee” somehow mysteriously, mischievously became “Nero, my dog, has fleas.”

There were the times when, upon Aunt Susie’s arrival from Raleigh for a visit in the country, McNeill’s mother served her guest pound cake in the parlor. It was his job to fan the heat away as Aunt Susie nibbled at her slice.

There were the summertime visits to the ballpark when his father was the manager of the tri-county baseball team.

There were the big life lessons — of doing good, of helping others, of the value of community — learned in small ways every day.

There were pitchers of sweet tea and piles of handheld fans on the big front porch by the even bigger maple tree, waiting for company to arrive for an afternoon visit.

There were Sunday lunches on the church grounds, where the children played and the preacher prayed over casseroles and deviled eggs.

And there was always music. Young William was a little boy with perfect pitch and a growing love of music. He played the piano, and singing was his favorite part of church. He learned the hymns, he played the hymns, and, when he wasn’t busy changing the lyrics, he sang the hymns.

Later, as the blues and gospel greats of the ’50s and ’60s found their voices, he heard church songs with new soul and new emotion, and he fell in love with them again.

He was drawn to music the way he was drawn to that picture of Jesus ascending into heaven. He couldn’t explain it; he just knew it moved him in some way.

And when he plays those songs today, his eyes close, his head tilts back, and his foot taps to keep the time. He still gets lost in them.

“I find an uninhibited joy in music,” McNeill says. “Its power is magnificent.”

McNeill is a collector of things — of stories, memories, and history, of music and art.
He is also a collector of handheld fans. And after a few minutes with him, you see how all the things he loves come together.

McNeill, who splits his time between Wilmington and Bladen County, began collecting fans about 30 years ago.

Today, his collection of 150 fans spans nearly six generations: fans handwoven from tall grasses in the 1880s to the newest one with an image of the Virgin of Guadalupe and prayers in both English and Spanish.

“I see myself not only as the collector of these fans,” he says, “but as an interpreter of them as well.”

It’s important to McNeill that the stories of these fans come to life, that they be shared and repeated and not simply cataloged and stored away.

He’s chosen to preserve the stories with words and songs and a good, old-fashioned history lesson.

A number of years ago, McNeill created a presentation with his fans that he shares with churches, civic groups, and museums. He colors the history of the fans with tales from his childhood and with music and hymns. He asks the audience to sing along. He asks them to remember.

He talks about the role of fans at church, about the images commonly depicted. Jesus walking on water. Jesus healing the sick. And, of course, Jesus floating.

With the eye of an art collector, he talks of the soft, warm colors and the use of light that intrigues him. He describes the mood and feeling those elements bring to an image. He points out religious icons and talks about what they represent and recounts a Bible story or two.

McNeill talks of the fan’s place in history in black and white, Protestant and Catholic churches.

Through it all, when there’s a piano around, in a thick, soulful voice, he sings. The traditional hymn “Abide With Me.” A ragtime interpretation of “When We All Get to Heaven.” A bluesy version of “Don’t Let the Devil Ride.”

And when the time comes, there is also a rousing version of “Take Me Out to the Ball Game.” McNeill plays it when he talks about the history of fans outside of church.

They were everywhere, he remembers — at the barbershop, the ballpark, and the tobacco market.

Many of McNeill’s fans have religious themes; others carry images and advertising that paint a picture of the secular side of the rural South after the Sunday service is over.

There are advertisements for Red Man Chewing Tobacco and Putnam Fadeless Dyes and Tints. A singing, rosy-cheeked baby extols the virtues of 666 liquid, tablets, salve, and nose spray, proclaiming it a cure for everything from colds to constipation.

On the flip sides of fans with pictures of Dale Evans and her horse, Buttermilk, and sports figures are ads for funeral homes, department stores, and ambulance services.

Taken collectively, McNeill’s fans tell a bigger story than any single advertisement or any one Bible verse. They tell of life, death, and salvation in a simpler world of two- and three-digit phone numbers, of RC Colas, Red Man Tobacco, and 20-cent slices of pie a la mode at Lou’s Diner and Rib Shack.

When Jesus in the Garden of Gethsemane and an advertisement for Lou’s Diner and Rib Shack show up in a single collection of anything, there you’ll find a story worth listening to. It’s that story that McNeill wants to preserve and pass along.

“This collection,” he says, “is really about a vanishing Americana and a way of life that we won’t ever have again.”

As McNeill closes his presentations, he plays and sings “I’ll Fly Away.” It’s one of his favorites.

Some glad morning, when this life is o’er,

He invites the audience to sing along. They do. It’s a crowd favorite as well.

To a home on God’s celestial shore,

And no matter how many times he sings it, in the words to that song, McNeill always finds a pretty good explanation for why Jesus was floating.