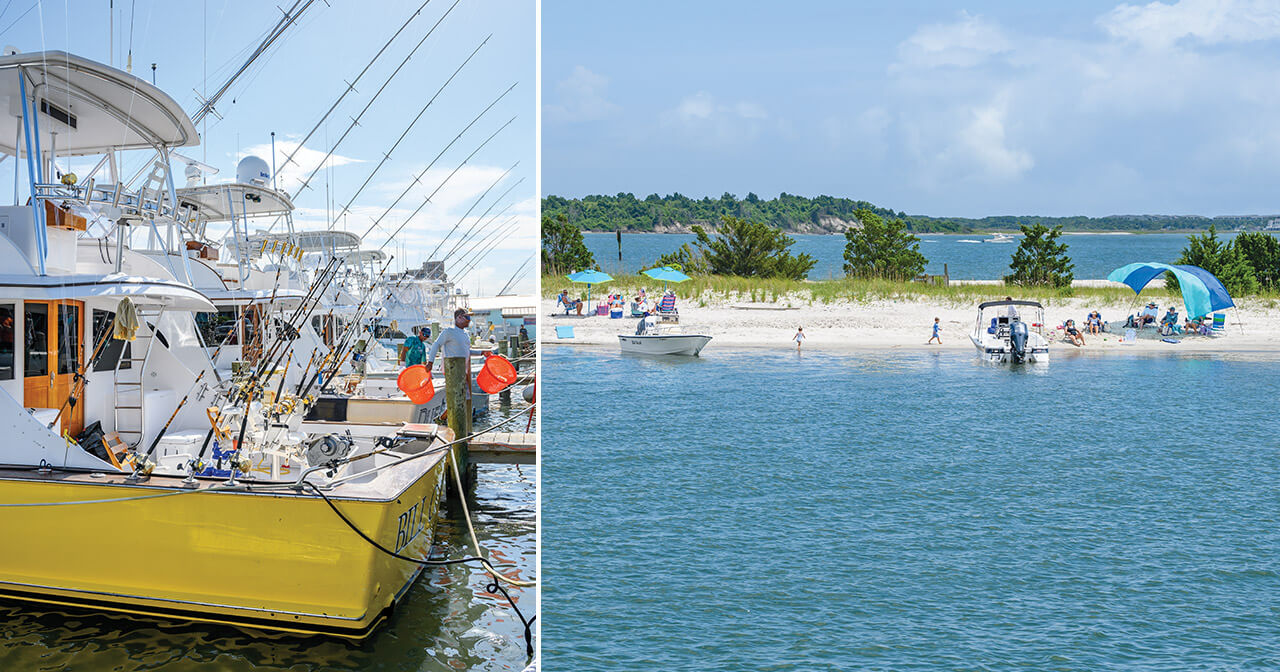 In Morehead City, boats stand at the ready: some, like the Bill Collector — built by Beaufort’s Jarrett Bay Boatworks — for fishing charters; others for afternoon trips across the channel to Sugarloaf Island (right), accessible only by watercraft. photographs by Chris Council

It is a working waterfront, an angler’s haven, a tourist’s can’t-miss, and a seafood lover’s mecca. Morehead City is a port town, a family town, a working town, and a party town with its own barrier island, dubbed Sugarloaf. And everywhere you look, there are boats. A row of sportfishing charter boats bejewels a historic waterfront. Boats drift in the harbor, filled with kids and fishing rods and family dogs. Every yard seems to hold a boat on a trailer. From the deck of Jack’s Waterfront Bar or the tiki-topped Yellowfin Pub, expansive views take in boats of every imaginable size. And from here, watery ways run in every direction. The Intracoastal Waterway courses west and east. To the north, the Newport River leads to the Adams Creek Canal and on to the broad, tidal Neuse. To the south lies the great Atlantic deep. “Water, water, everywhere,” saith the Ancient Mariner. He might have been talking about Morehead City. 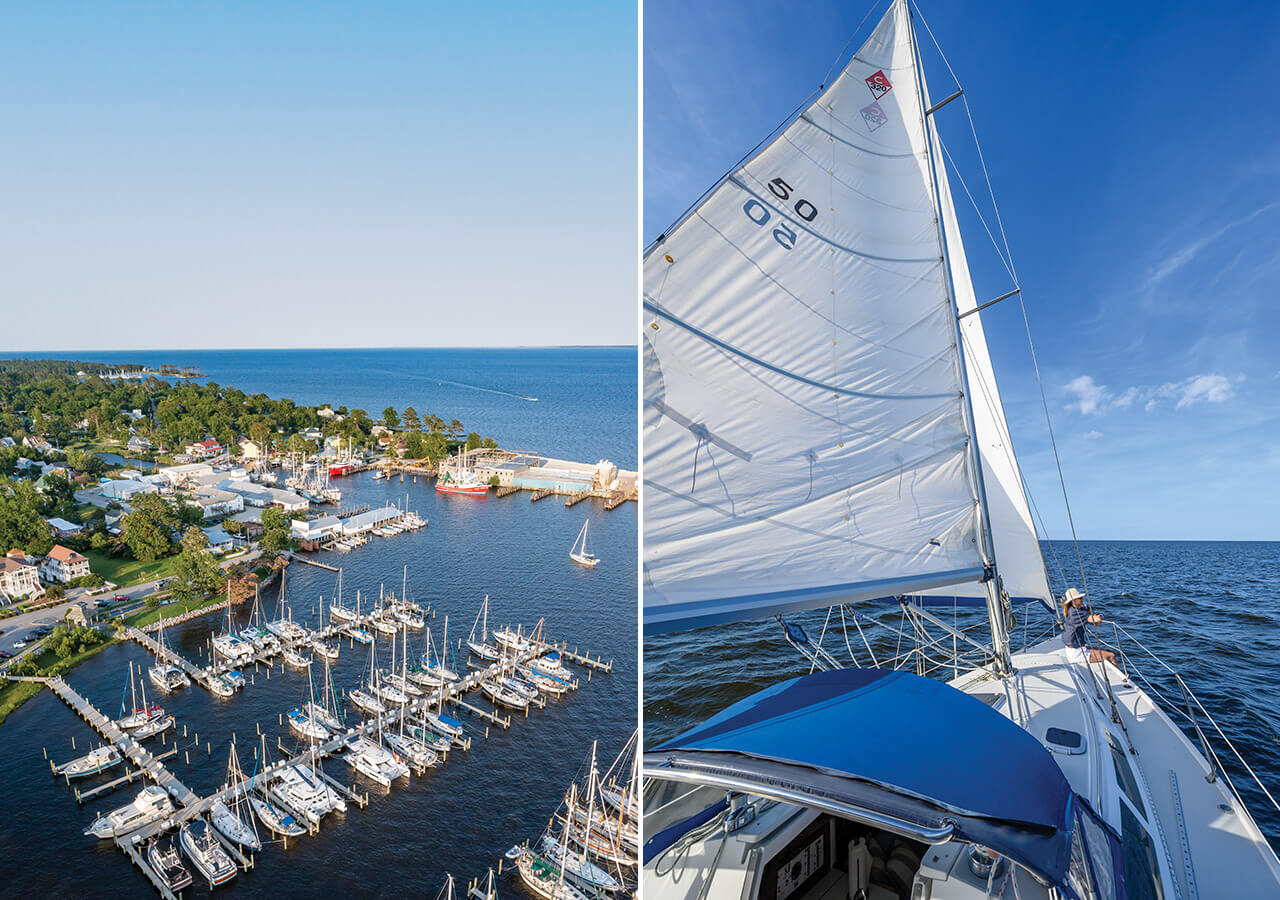 Oriental Harbor Marina (left) offers slips for 110 vessels — a fraction of the nearly 3,000 boats inhabiting the village, (human) population 900. Carefree aboard the Shrimp and Grits, the sailboat she owns with her husband, Rusty, Cynthia Huffines doesn’t mind being outnumbered. photographs by Chris Council

The trees sway and the marsh grass lies down low and the chop of the Neuse River clop-clop-clops against the town docks like a horse’s hooves on cobblestone. More than any other North Carolina town, Oriental is shaped by sea breezes and river zephyrs, a beloved community of people whose lives seem to heel and tack and run unfettered with the wind. The same harbor that, according to legend, once drew Blackbeard draws sailors still today, and on nearly every afternoon, the blue horizon off the waterfront is a checkerboard of colorful jibs and mainsails and genoas. Signal flags snap taut and halyards clink on masts. Laughter trills across the small harbor. Everything in Oriental seems tethered to the wind, a wild and constant companion to life on the water. 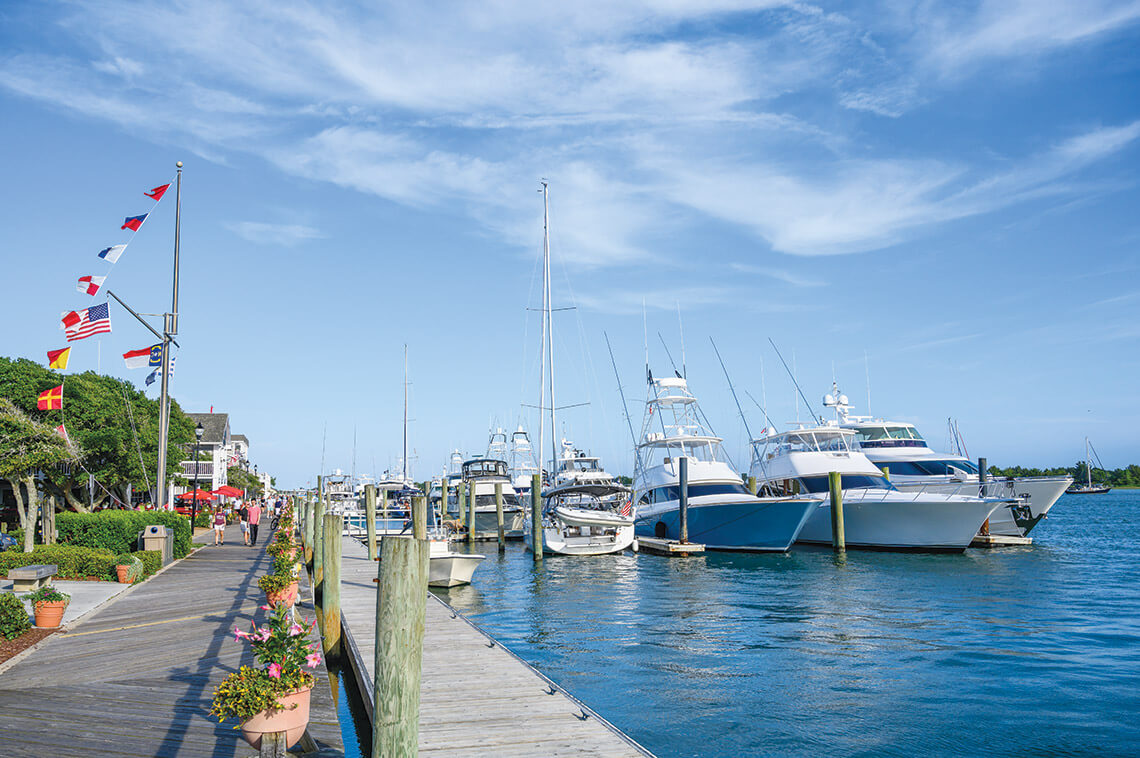 This Carteret County community is so proud of its maritime culture that, overlooking the boats on Taylor’s Creek, a yardarm flies national, state, and town flags — plus eight nautical signal flags that spell out “Beaufort.” photograph by Chris Council

It is a coastal Carolina Champs-Élysées, a grand promenade gone all salty and nautical, equal parts down-home Coastal Plain and famed polyglot stopover on the Intracoastal Waterway. If it floats, it finds its way to Beaufort, sooner or later: Sailboats of every size, from ports near and far. Multimillion-dollar power yachts. Ten-foot dinghies. Kayaks and skiffs. Taylor’s Creek parallels the entire Beaufort waterfront, and the calm-water byway can be filled nearly shore to shore with craft. Hop on a boat or prop your flip-flopped feet on the boardwalk rail. Drink a beer, and drink it all in. There are wild horses feeding in the Carrot Island marsh and a Jimmy Buffett song spilling out of the Dock House Restaurant. Life is good, but Beaufort fans know that here, it’s just a bit better. 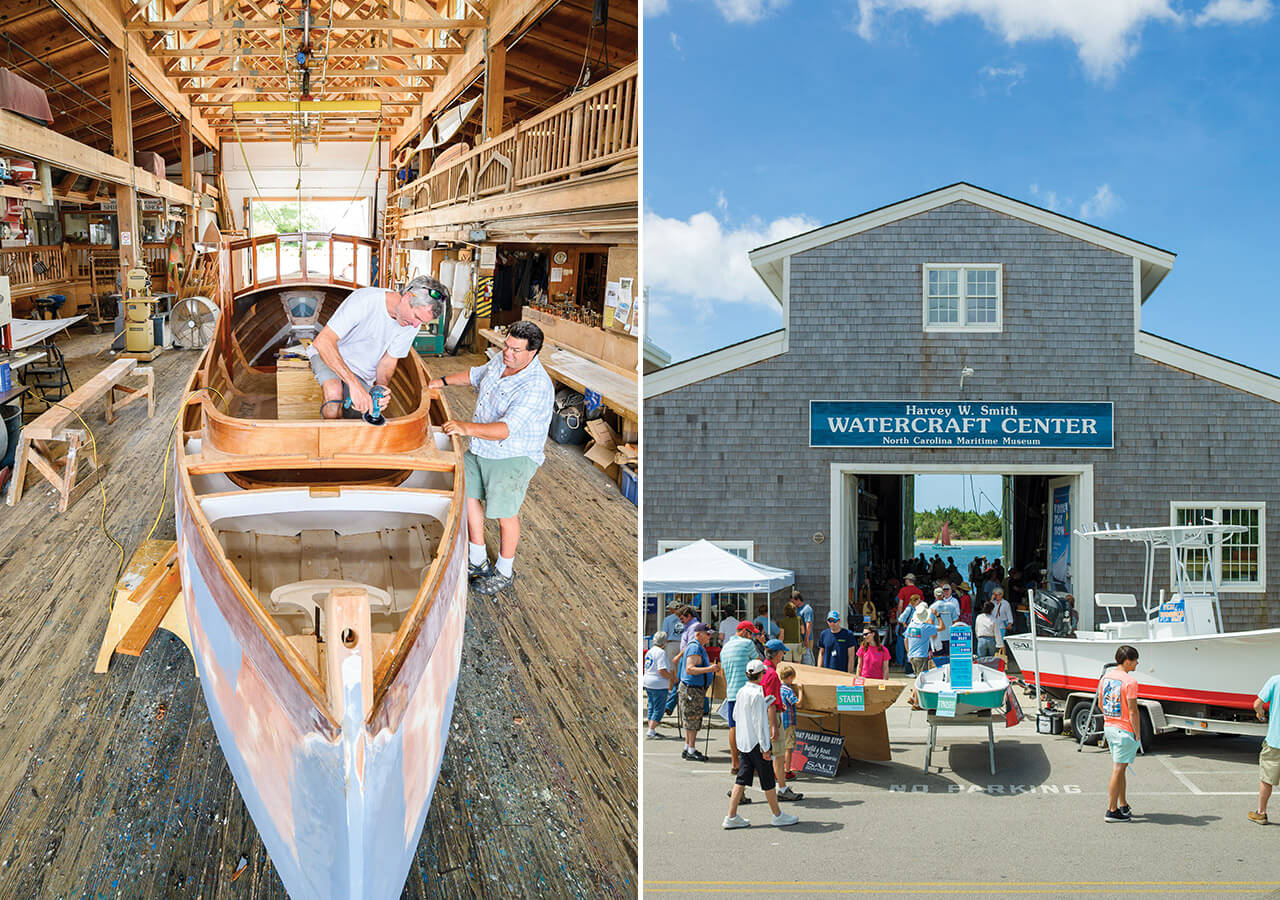 They’ve never been forgotten, the dories and two-masted sharpies and working skiffs that plumbed these Core Sound waters. Nor have the wooden trawlers and ketches and even the dugout canoes that once coursed across the Carolina waters. For more than 45 years, they’ve come home to the Beaufort waterfront for the annual Wooden Boat Show at the Harvey W. Smith Watercraft Center. Scores of boats line the town docks. Thousands of boat lovers throng the waterfront. There are boat models and a traditional sailboat race. You can learn to tie a monkey-fist knot or join along in a sea chantey from days long past. It’s part romance and part history and part a promise to the future, keeping traditions alive so that the old ways will always prompt wonder on the Crystal Coast. 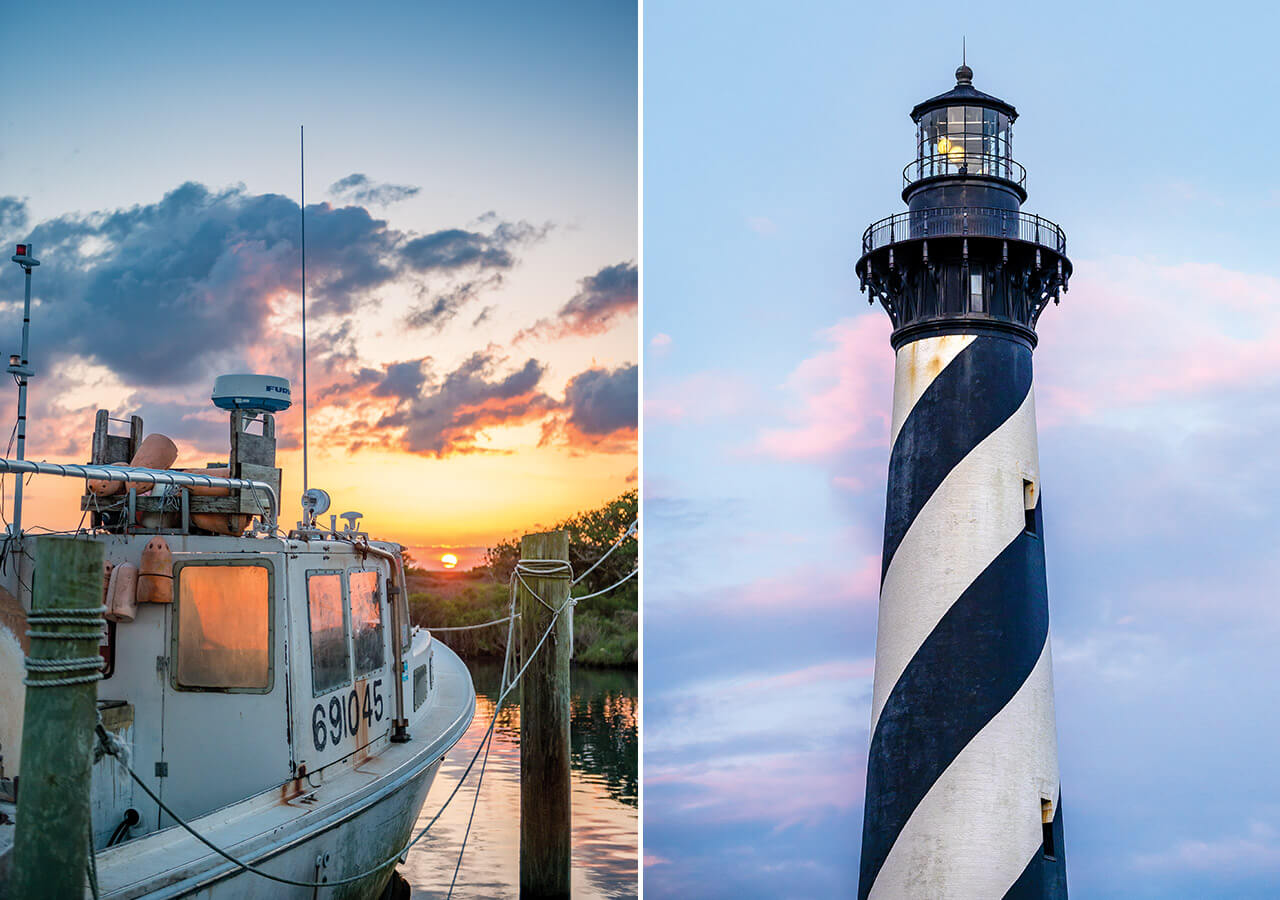 When the sun sets over the Cape Hatteras Lighthouse and the commercial fishing docks in Hatteras Village (left), it draws to a close another busy day of fishing around the island, where locals have long made a living on the water. photographs by Chris Council

Hatteras
Soul of the Outer Banks

It’s always been a little out there — out on the far edge of North Carolina, out where the hardtop ends, out where the sea holds all the cards. “Hatteras Village,” as the locals call it, is the seventh and southernmost of the barrier island hamlets of Hatteras Island. You can drive here, down the long, sandy spine of the northern Outer Banks. Or you can arrive by boat, via pleasure craft or a lumbering ferry. But once you find your way to Hatteras, you will never truly leave. Every salt breeze will take you back to those festive moments when the fishing fleet returns home with its catch. Every patch of dappled sun will remind you of the light dancing on boat hulls and oyster-armored docks. Hatteras is a little out there, yes. Which makes it so worth the journey. 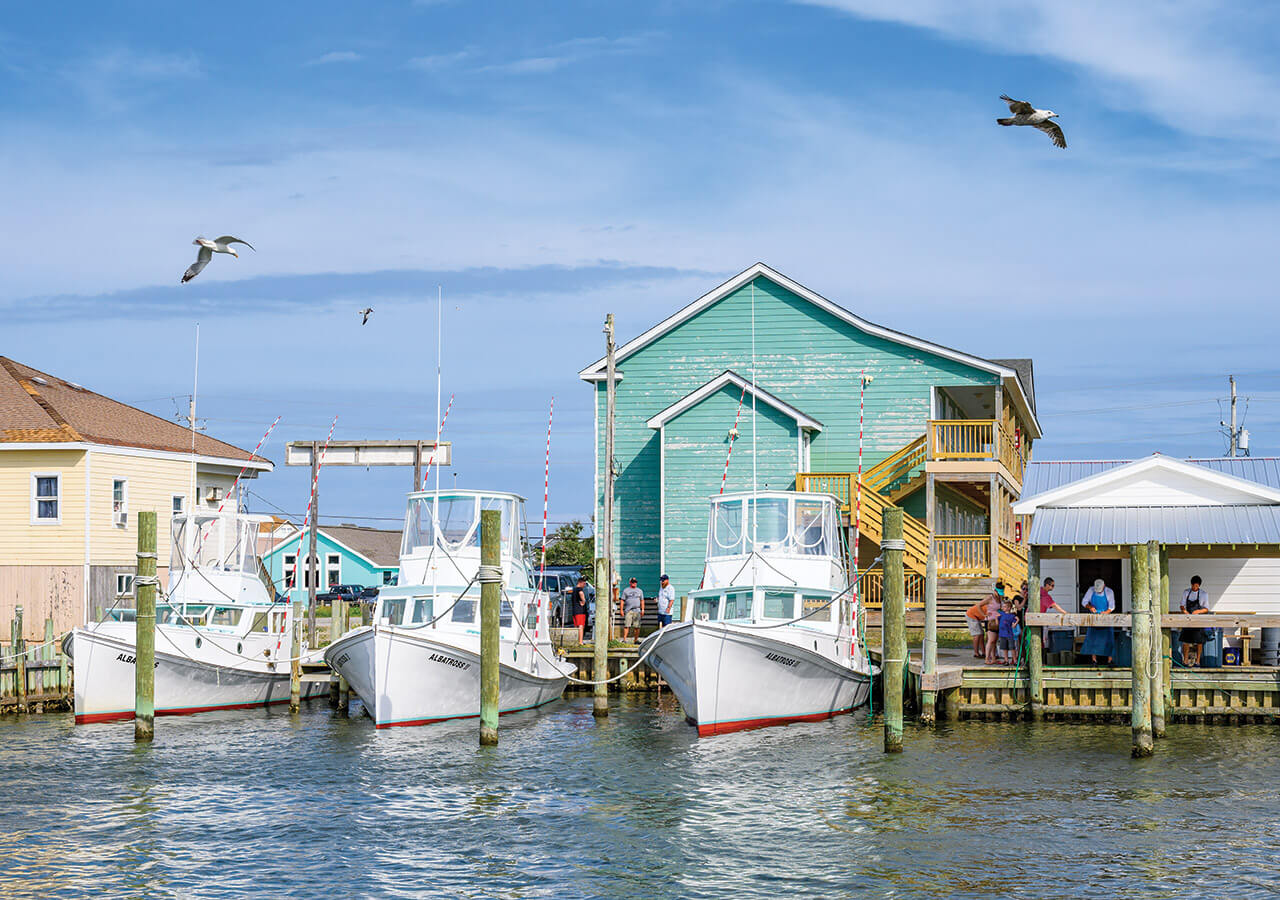 When Capt. Ernal Foster founded the Albatross Fleet on Hatteras in 1937, he became the first in the state to offer charter fishing. The three original Albatross boats still bring in the daily catch, which staff members clean for waiting customers. photograph by Chris Council

Catch of the Day

Gulls wheel in the breeze, and wide-eyed children stand on their tiptoes for a better view. Late in the afternoon, the Hatteras docks are abuzz with energy. Charter fishing boats are snug in their slips as the catch is off-loaded. Dock carts ferry mahi-mahi, wahoo, and tuna to the fish-cleaning station. Knives flash. Smiles widen. And as it has forever, the sea provides.

It’s a meeting place — where the river meets the sea, where fresh water meets salt, where past and present come together in a village that has always looked to the future. On the western shore of the mouth of the Cape Fear River, Southport has long been the welcoming front door to North Carolina. It’s a fort town and a port town. A kick-back-and-peel-shrimp-on-the-docks town and a knock-through-the-shops town. From here, you can boat to Bald Head Island or the Wilmington waterfront. Calm coves await on the Cape Fear, or you can set sail for the open blue in waters that have hosted colonial explorers and blockade runners and captains across the centuries. Southport is the homeplace of literary giants and ancient live oaks and island-studded waters. There might not be a happier coastal village on all of the Carolina shore. 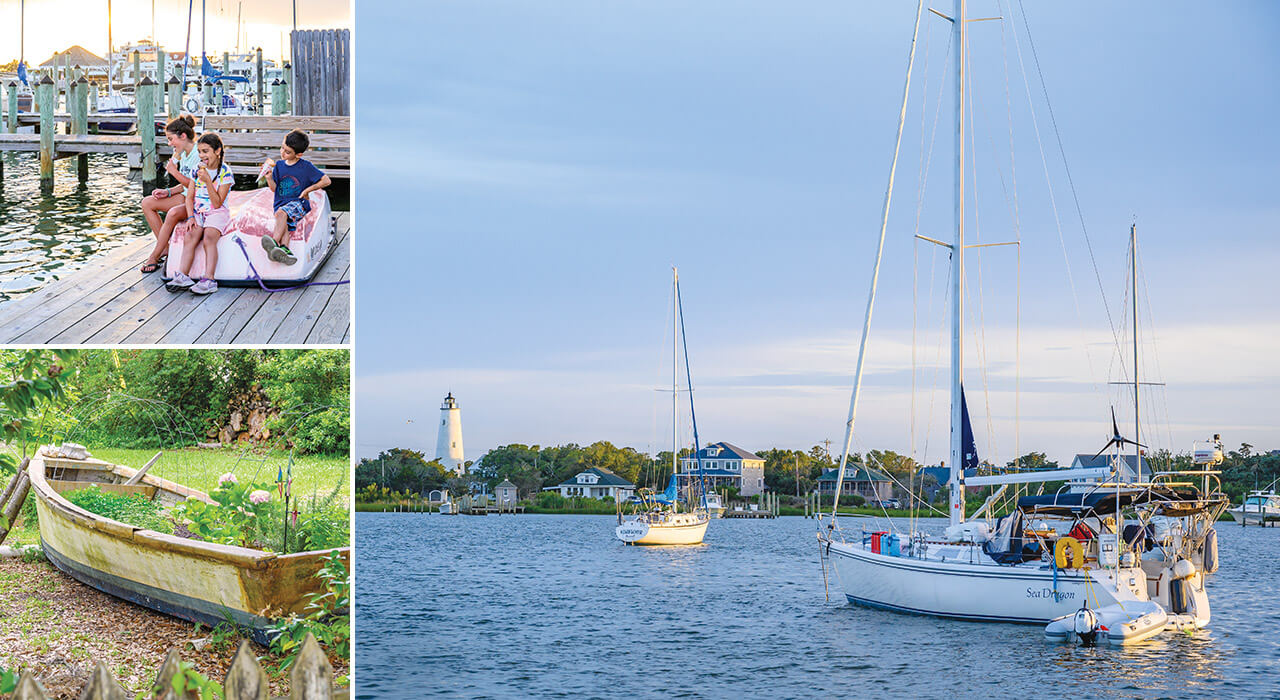 Whether you’re enjoying ice cream on the docks, strolling past island homes with nautical emblems in the yard, or watching the boats on Silver Lake Harbor, local maritime history is never far from mind in the village of Ocracoke. photographs by Chris Council

Ocracoke is the closest thing you’ll find to a North Carolina coastal Brigadoon, that mythical place of enchantment and adventure. Except Ocracoke is no myth at all. The village is as real as the drop in your heart rate that registers the moment you make landfall. On the island’s sequestered Silver Lake Harbor, quiet waters are ringed with wharves and shops and restaurants and inns. Old fishing boats crowd the side yards of historic homes. Visitors literally can’t get here without a boat — your own, a charter vessel, or via ferry from Hatteras Island or the mainland. Which means you can’t leave without hopping aboard one craft or another, either. If anything, that helps take the sting out of any departure from this magical barrier island hamlet. 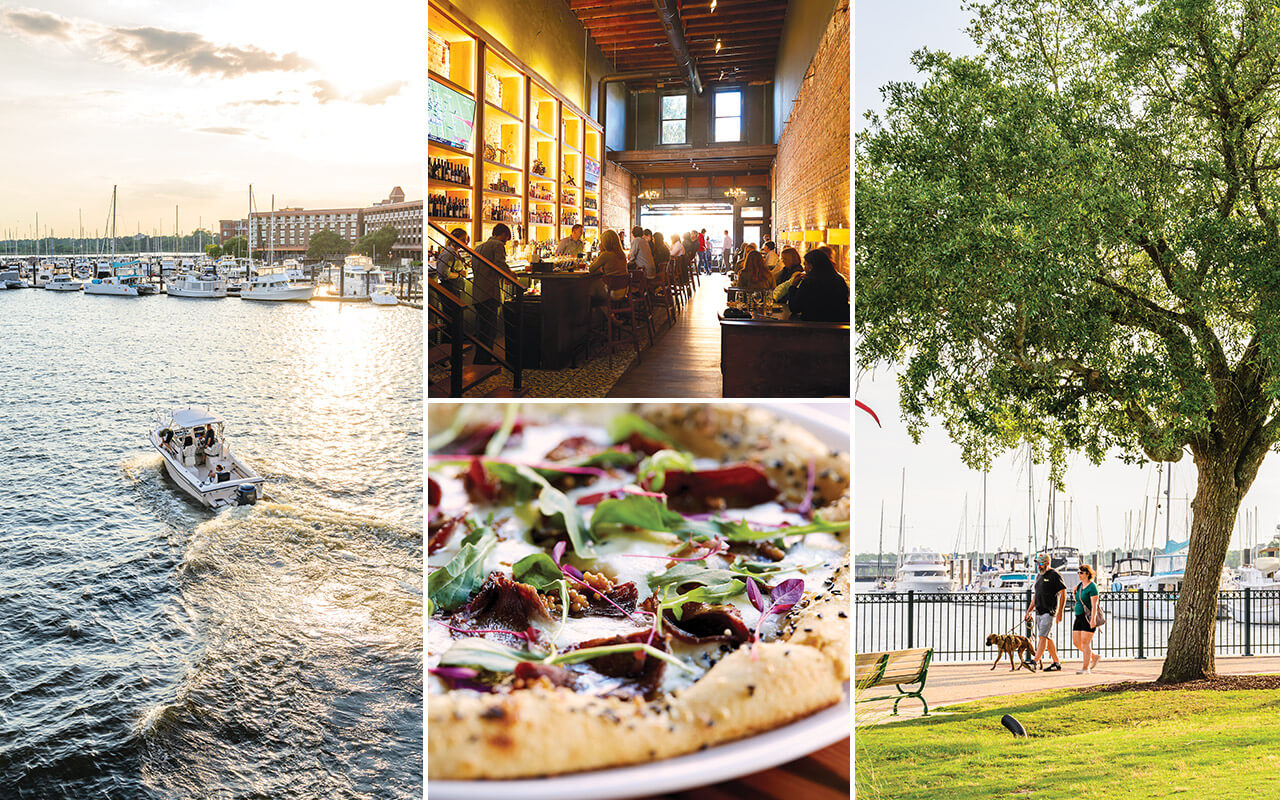 New Bern
Crossroads on the Water

All. That. Water. From the northwest, the Neuse River flows by, a broad sweep of fresh water that nudges against the brackish water of a vast estuary. From the southwest come the wild waters of the Trent River, carrying the scent of sweet bay and sassafras from the untrammeled woodlands of Croatan National Forest. And caught in the happy middle, at the confluence of history, is the colonial capital and modern city of New Bern. Its harbor gleams and glistens with acres of fiberglass and sails — boats moored and boats underway and boats at dock in seemingly every direction. For vessels of every size, New Bern has long been a firm anchor for North Carolina’s coastal heritage and culture.

For boaters, there’s no time like the present to cast off, and New Bern’s various waterfronts — on the Trent River, on the Neuse River, overlooking the exquisite town harbor — create a multitude of experiences. Meanwhile, on terra firma, boardwalks and waterfront parks beckon boaters and landlubbers alike. You can prop your feet up on a boat’s bow rail or keep them firmly planted on solid ground. New Bern makes it easy to live on the water — whether for a few hours or a lifetime.