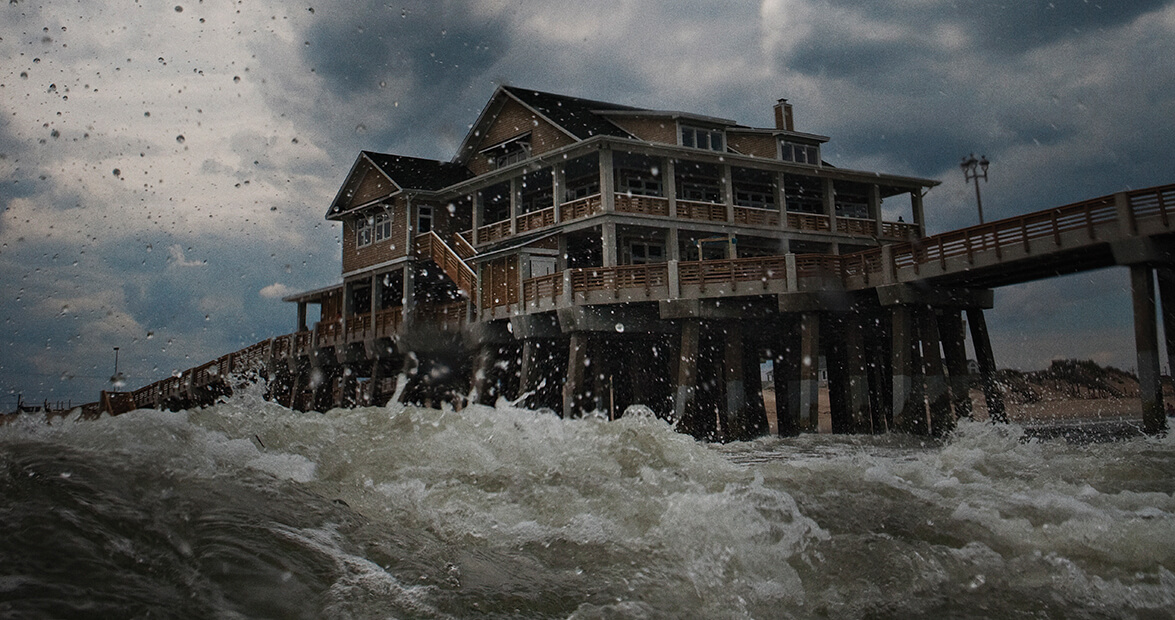 Years ago, people in Harlowe couldn’t help but stare at a local general store clerk. In hot weather, the clerk would roll up his sleeves to reveal a tangled web of scars and gashes along his forearms. They were the marks of survival: When the hurricane of August 1932 swept up the North Carolina coast, the man had been caught outside. As the winds blew harder, the man found a pine tree and wrapped his arms around it as the tree swayed and the bark sliced through his flesh.

That man is gone now. But hurricanes have etched their presence on generations of North Carolinians — scarring our landscape, man-made and natural; toppling houses; and blowing piers out to sea. Native American tribes knew our barrier islands were temporary, and built their settlements in the thicker forests inland.

But for most, hurricanes leave their deepest imprint on memory. Even now, a decade since the last major hurricane made direct landfall on the North Carolina coast, hurricane stories are sources of tragedy and pride, even humor. They’re stories of destroyed property and lost loved ones, of hurricane parties that refused to yield to the winds, of the humble who became heroes and the powerful who were left powerless. Like the time in August 1879 when Gov. Thomas Jarvis traveled to Beaufort for a “Grand Ball” and special convention at the Atlantic Hotel waterfront resort. At 3 a.m. on August 18, the winds woke the visitors. An hour later, the storm surge swelled through the cracks in the floor. Palmer Davis, a local black man who wouldn’t have been allowed to stay in the hotel, rushed through the four-foot surge and carried several children to safety. The governor, who’d been asleep on the second floor, escaped just before the three-story hotel collapsed into the sound. Davis was hailed a hero, and Governor Jarvis took the train home to Raleigh dressed in a borrowed sailor suit and boots.

Rodney Kemp heard that story told time and again growing up in Morehead City. Today, Kemp keeps those old stories alive and adds some of his own memories. Like the fear he felt as the winds of Hurricane Hazel howled outside his Evans Street house in 1954. That Category 4 storm is still the strongest to make landfall in North Carolina, hitting Southport with its 150-mile-per-hour gusts. No one thought of evacuating back then, though. There was property to protect, and where would you go? Kemp remembers the joy of no school for a week and the pride of making his first $10, digging up and identifying his neighbors’ boats lost in the debris. 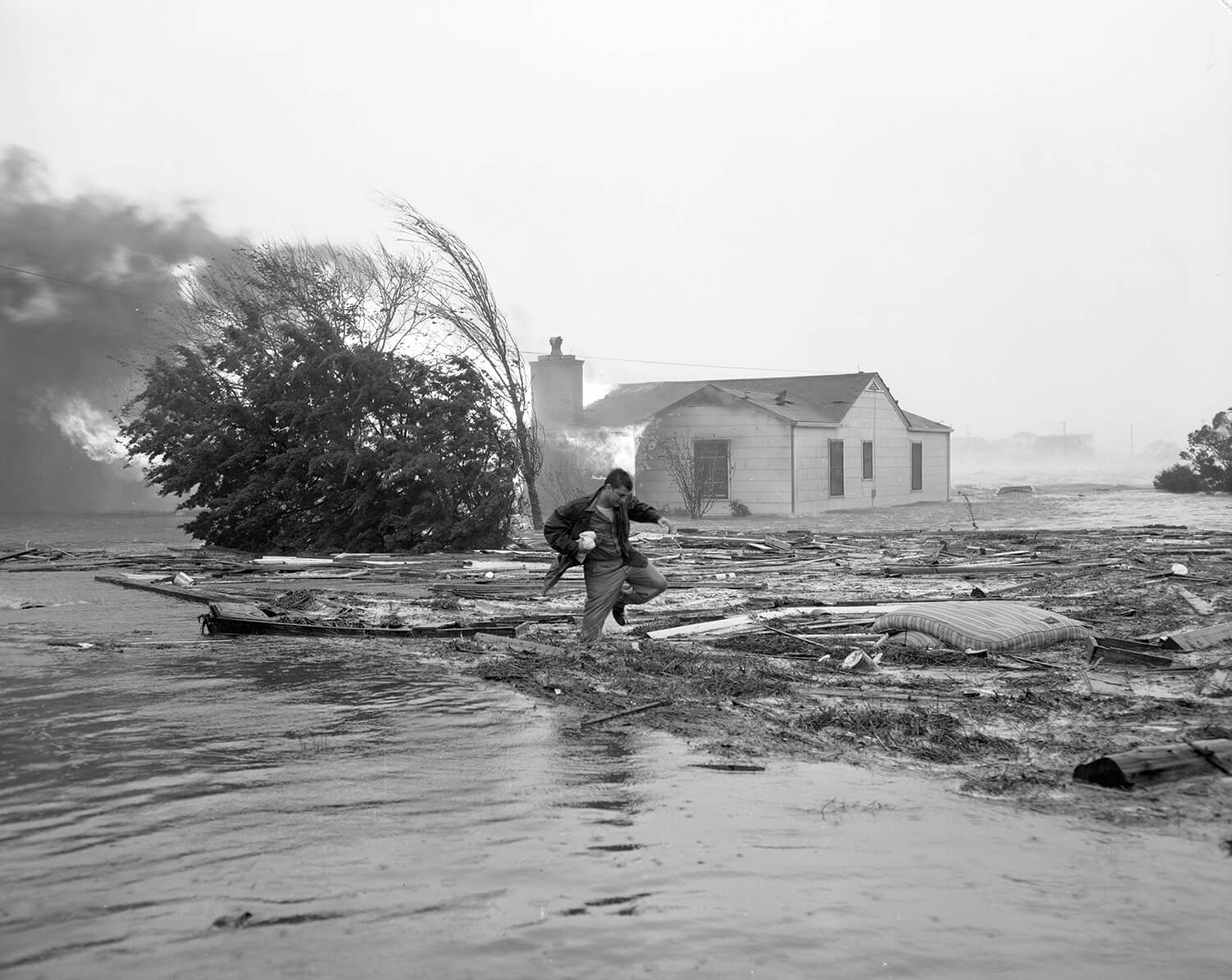 Fact: In recent years, North Carolina has had more hurricanes either strike it directly or pass very close than any other state. So says Wilmington tracker and researcher Mark Sudduth. Hitting with the full force of the tropics, more Category 4 and 5 storms (on a five-category scale) land on the Florida coast than anywhere else. Still, Sudduth notes, “Florida has had a grand total of zero hurricanes in almost 10 years.” By the time an Atlantic hurricane veers north at the Lesser Antilles and makes a beeline for the Outer Banks, the colder waters tend to weaken the storm. But even as the winds slow down and the storms start to fall apart, hurricanes cover a large area. Hurricane Floyd in 1999 was only a Category 2 when it made landfall near Wilmington. But Floyd’s tidal surges of 10 feet and widespread heavy rains flooded areas as far inland as Raleigh. The storm left $6 billion worth of damage in its wake.

“It’s the difference between being hit by a laser-guided missile and being carpet-bombed,” Sudduth says. 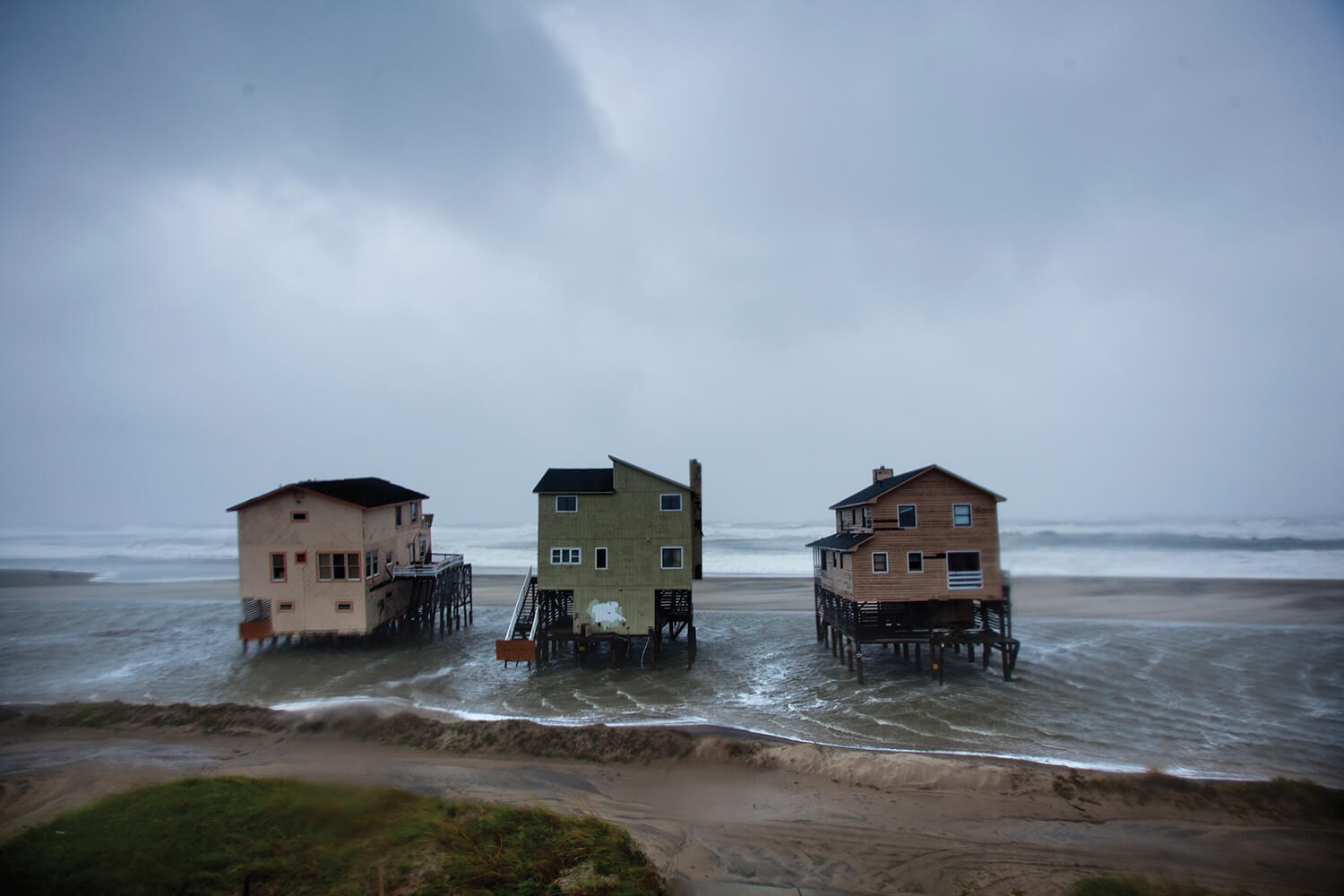 One thing about hurricanes — no two are alike. Sure, there are patterns and types and categories. But within each, there are exceptions to the rule. They’re like people that way. And maybe that’s why the National Weather Service started naming them in the early 1950s. In this age of climate-controlled environments and smartphone weather apps, it seems like we have a handle on nature. But people remain unpredictable. And so do hurricanes.

Even in the 19th century, before the advent of sophisticated technologies that model Atlantic storms as soon as they form off the Western coast of Africa, North Carolinians have looked for hints of approaching fury. Like the fishermen on Core Sound who predicted storms by the sight of marsh ponies rushing inland so that they could run with the wind at their backs. Or the upper North River farmers, who saw mules searching for higher ground a few days before major storms. At some lighthouse weather stations, keepers would log wind speeds and measure rainfall. And some early fishermen owned barometers to track the sudden drops in pressure that come before storms. But there was little time to prepare — communication was slow and communities were isolated.

“You pretty much knew a storm was coming when it started raining,” says Jay Barnes, who has spent decades researching the state’s hurricanes. His book North Carolina’s Hurricane History traces the history of our storms, from the accounts in 16th-century explorer’s journals of the sudden and “loathsome gales” that wrecked ships near Bald Head Island, to more recent storms.

Barnes had a hurricane-free childhood in Southport. Yet in the years when he was growing up during the state’s long hurricane drought between Donna in 1960 and Diana in 1984, memories of Hazel were still fresh in that fishing town south of Wilmington. Barnes heard stories of Hazel. How it hit in October at just the wrong time, when the tide was already at its highest. How the ocean rose 17 feet and moved whole homes hundreds of yards from their foundations. 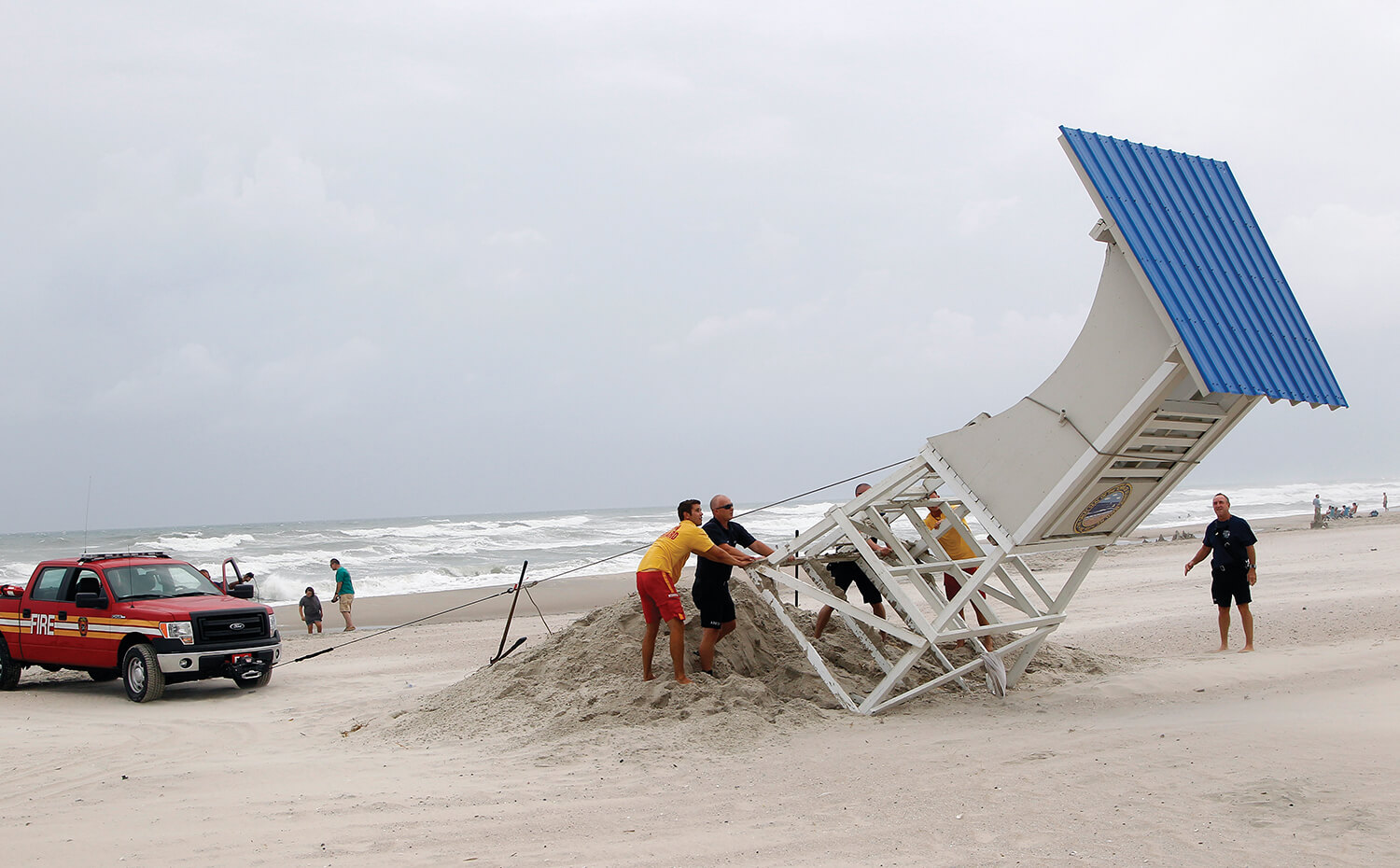 Forecasts get more reliable every year. Though a lot can change in five days — storms switch course, weaken, strengthen again — technology has made forecasting the locations and paths of hurricanes easier, Barnes says. But a storm’s intensity can change in rapid, dicey ways. Emergency managers like Sandy Sanderson in Manteo train and plan for hurricane response year-round. About three days out, emergency managers in other counties make the call on mandatory evacuations. “There is a lot more information, and there is a lot more technology,” Sanderson, who’s now retired, says. “It still boils down to the individual looking at the threat and then responding how they’re going to respond.”

And it’s the people who are the most unpredictable. Some rush to purchase water jugs and plywood to board windows at the first hint of heavy winds. Others won’t evacuate until it’s too late. And then there are those who rush toward the storm: reporters seeking dramatic stories, and surfers seeking the big waves just before the storm. And Mark Sudduth and his Hurricane Intercept Research Team (HIRT). 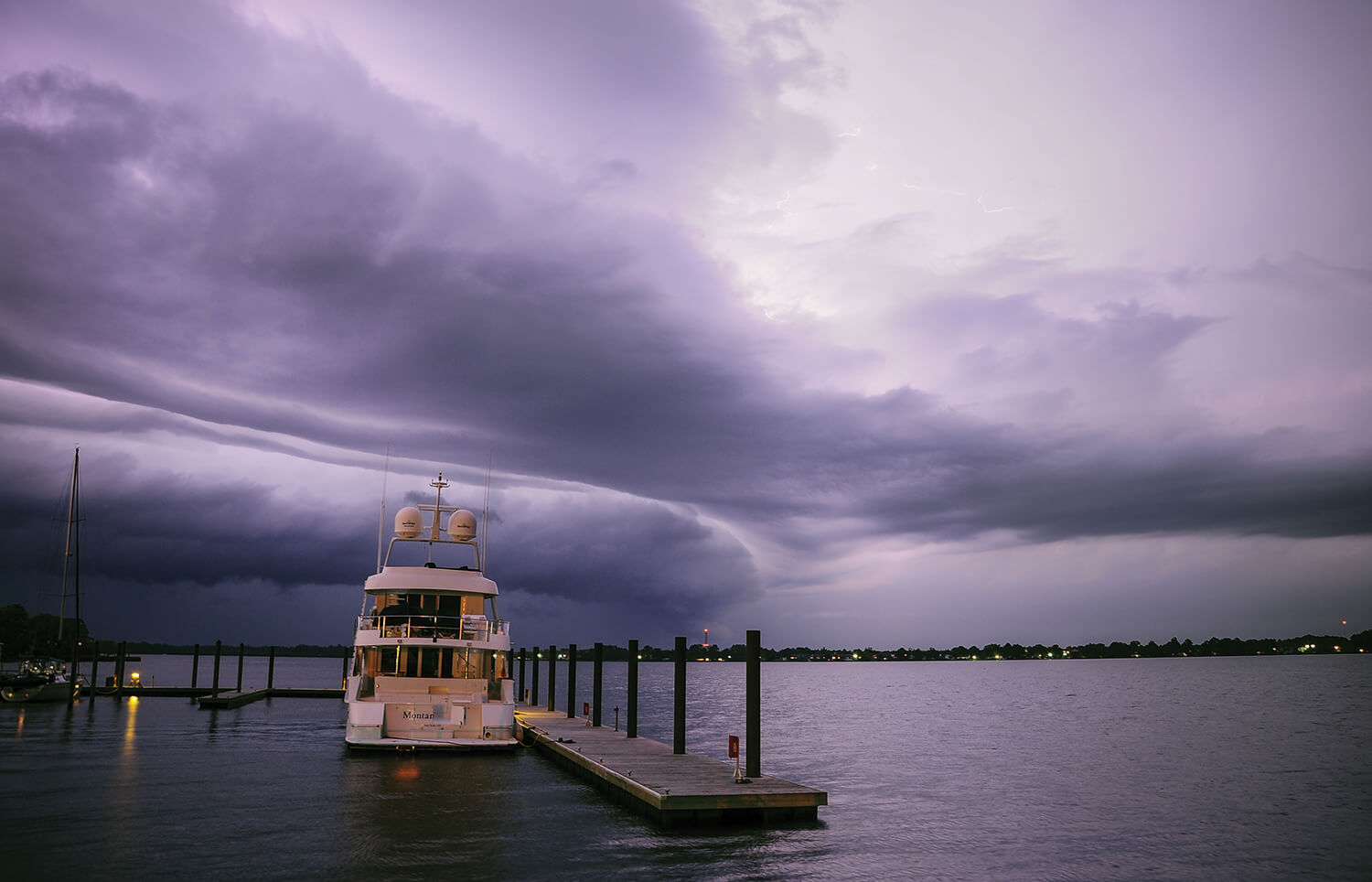 Sudduth’s 2003 Chevy Tahoe has 380,000 miles on the odometer, a distinctive logo on the doors, and the dents and dings from a dozen or so hurricanes. Inside, on the dashboard, an anemometer takes wind speed measurements once every second. At the first sign of a storm forming off the western coast of Africa, Sudduth and his team of hurricane trackers are among the few headed toward the storm. Part of the attraction is thrill-seeking, Sudduth admits. The rush of a potent mix of fear and excitement leaves trackers anxious about the dangers but awestruck by nature’s power. He remembers feeling the same while watching his high school science teacher turn on his National Oceanic and Atmospheric Administration radio during Hurricane Diana in 1984. Later, as Sudduth interned for New Bern TV meteorologist Skip Waters, he learned the science of hurricanes, too. Above all, though, he’s motivated by the knowledge that somehow, somewhere, the data collected might save a life.

“Hurricanes ruin lives,” Sudduth says. “The only way of reconciling your excitement about them is that it contributes to scientific understanding. We try to put out information like where we can predict the storm surge will be the biggest threat, and hope that we can steer people out of those areas.”

Technology has changed hurricane tracking, too. Ten years ago, heavy equipment charged by car batteries recorded winds and kept track of surges. Now, small plastic briefcases with camera lenses record and track wind speeds. Sudduth and his HIRT partners take those briefcases and get them as close as possible to where the eye is predicted to pass. The briefcase cameras record the winds and storm surge on far-off servers. When the storm clears, the team uses tracking devices to find suitcases that survive; they’ve found them wedged under trailers and hanging from tree limbs.

Recently, Sudduth has done most of his work out of state. Now, as a father, he hopes it stays that way. It’s been a while since a major hurricane has hit the state’s coast. Irene caused soundside flooding in 2011, and smaller hurricanes have brushed the shoreline. But it’s been 12 years since Isabel soaked Dare County, and 16 years since the widespread flooding and deadly devastation of Floyd. Another building boom has brought houses and hotels and condos ever closer to the waves. You might say we’re overdue for a hurricane. Just don’t say that in front of Mark Sudduth. “Hurricanes aren’t library books. They’re all different. They don’t remember, ‘Oh, we haven’t hit Wilmington in a while, we need to go there. Oh, we went to Florida last year.’”

Still, from this June through October, North Carolinians will look to the east and hope for the best — whatever that might be.