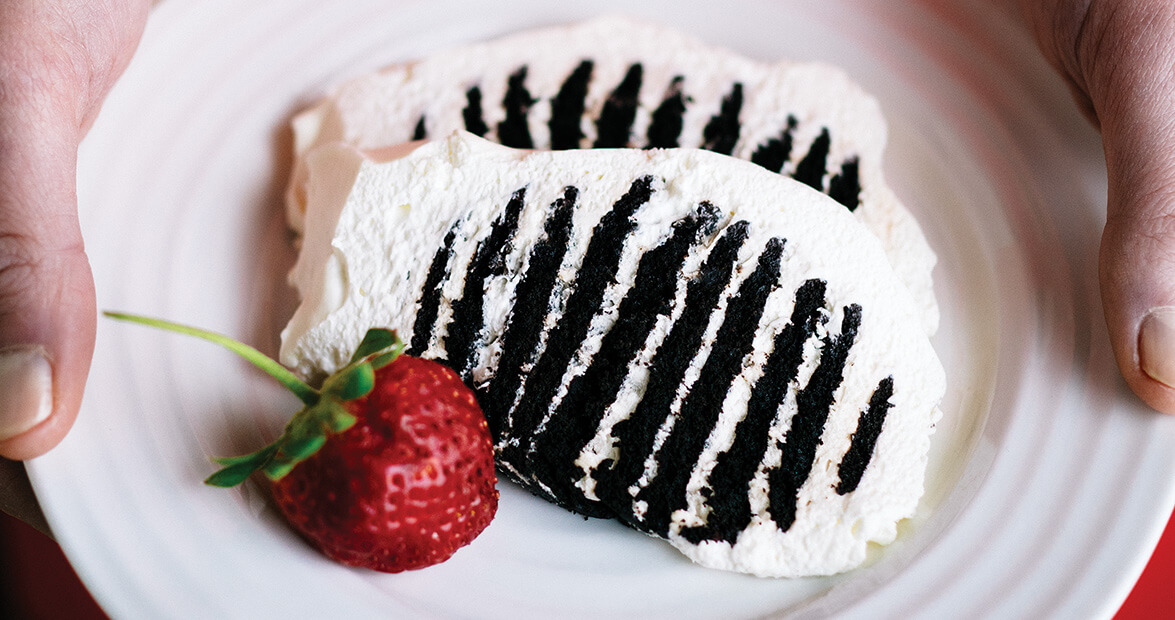 A cubicle colleague couldn’t believe there was such a thing as an icebox cake. Like Mrs. Tabitha Twitchit in Beatrix Potter’s The Tale of Tom Kitten, I was affronted. I whipped out my iPad, scrolled to the recipe app, and tapped “Desserts.” There in the index was not one, but two entries under “Icebox Cake,” with information I’d personally typed in.

My coworker’s doubt probably stems from two facts: He’s not originally from the South, and the word “icebox” has been filed under “archaic” everywhere but in church and Junior League cookbooks from the 1950s and ’60s, and replaced with “refrigerator.” The woman who cooked for my family growing up always referred to the refrigerator as the Kelvinator. The first syllable rhymed with kale (another soon-to-be-deemed-archaic word if I have anything to do with it). But “fridge cake” lacks a certain je ne sais quoi, and, besides, a refrigerator cake can be coconut or anything with cream cheese frosting that needs to stay chilled. “Kelvinator cakes” might work as a replacement, though. At least it’s alliterative.

With an icebox cake, there usually isn’t a “cake” involved at all — not one that requires flour and eggs and butter and a beater, anyway. Instead, the namesake “cake” is a cookie, a wafer, or a ladyfinger that softens into a texture unlike anything else when pressed up against dairy. Dairy as in whipped cream. Real whipped cream.

Park your diet at the door.

Icebox cake is about temperature — chilled, but not frozen — and texture. Soft, but not mushy or liquidy. Not … dissolved. I knew there was a reason I loved tiramisu when it arrived on the cuisine scene. Tiramisu has elements of icebox cake, including ladyfingers. But they’re presoaked or, at the very least, dampened, and therefore dissolving before they ever make it to the fridge. Banana pudding, that staple of the South, is related to icebox cake, as is English trifle, but both are too custardy to compare.

And then there’s the third element of the perfect icebox cake, along with temperature and texture: taste. I find that most icebox cakes of good repute involve chocolate, not fruit.

The first icebox cake I was introduced to did indeed involve chocolate, and ladyfingers. It was in my grandmother’s kitchen, and, living in Walnut Cove, I can’t imagine where she found ladyfingers. She must’ve “run into Winston,” I guess, like she did for everything else. She made icebox cake in ice cube trays — the old-fashioned silver metal kind, as obsolete as pressure cookers and double boilers — removing the hinged, jerk-up handle that refused to loosen unless you ran hot water over it. Ladyfingers fit perfectly side by side in those rectangular relics. Then a layer of block German chocolate, melted. Then a layer of whipped cream. Repeat all three layers. Refrigerate overnight. Watch out for your grandchild, who’ll sneak down and fold back the Saran Wrap and lick the whipped cream from the surface, and possibly gouge out a corner. Serve with a spatula.

Here’s the rub: Icebox cakes don’t slice evenly or cut prettily. Often, icebox cakes don’t even look pretty, which brings me to my second recipe, called zebra cake at my house. Zebra cake requires Nabisco Famous Chocolate Wafers, which will take you some time to find at the store, so here’s a shortcut: Head straight for the end of the ice-cream aisle, to the skinny shelf that holds the ice-cream cones, butterscotch topping, and so forth. There, just on the top, will be the yellow, single-sleeve packages of Famous Chocolate Wafers. Buy two boxes because they’re hard to find, and frequently sold out, and the person who bags your groceries will carelessly put them in the bottom, like he does your perfect pears, and a half-dozen wafers will break in transit.

You’ll notice a not-very-enticing photograph of a zebra cake on the box. Not because the Nabisco folks have no decent artists or photographers, but because this icebox cake is difficult to decorate. Here’s why: following the box recipe, whip cream with vanilla extract and some sugar. (Pay no attention to the box recipe on this count; it calls for no sugar, which is unacceptable. No sugar means the beaters are no good for later licking.) “Frost” a wafer with a schmear of the whipped cream, top it with another wafer, add another schmear, and repeat, until you have a nice little circular stack. Lay the stack on its side, make another stack, add it to the end, and then, eventually, cover the whole thing in whipped cream. 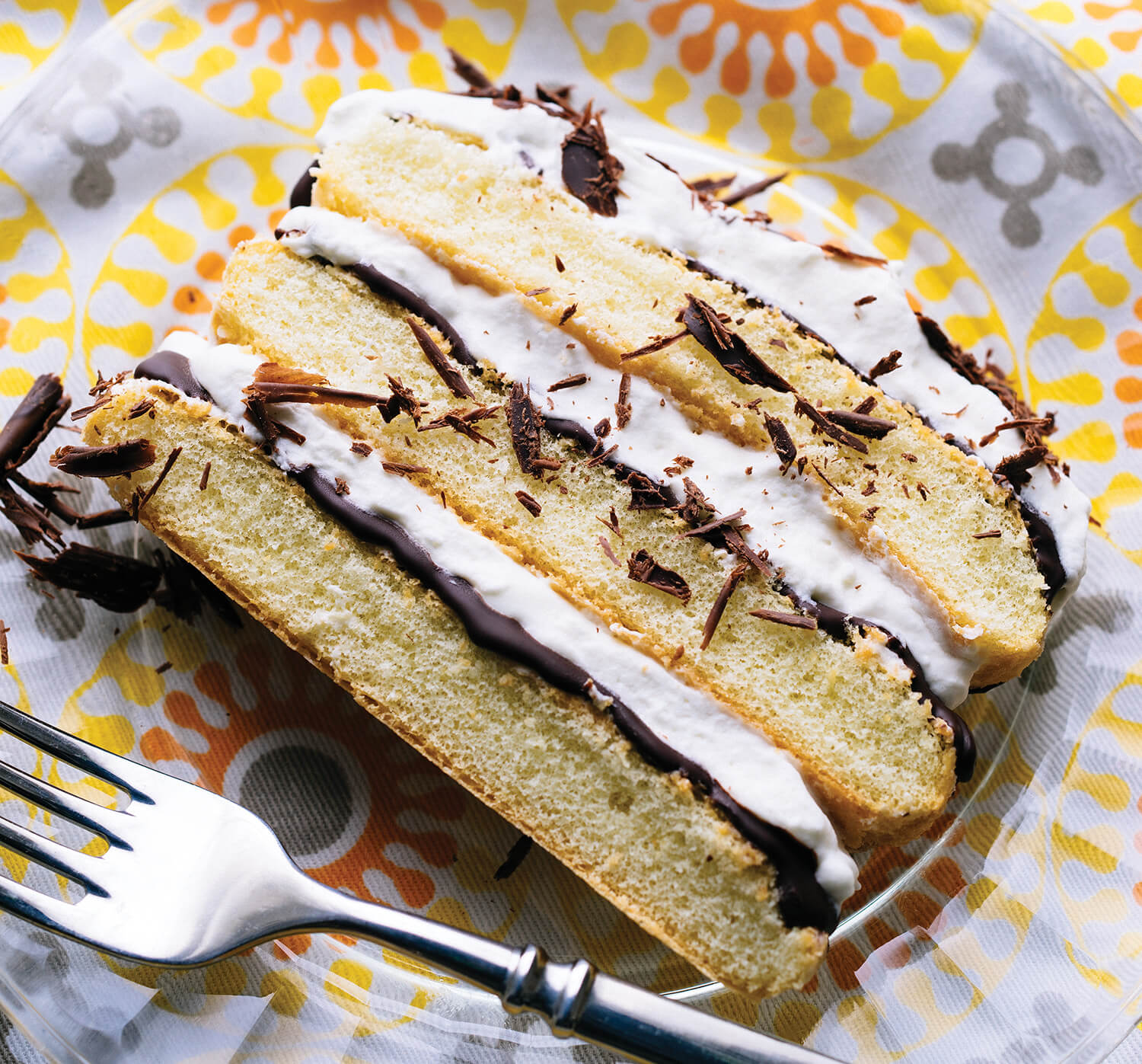 The layers of an icebox cake look complicated, but are actually quite easy to execute — not to mention, tasty! photograph by Charlotte & Johnny Autry

So now you have this long, hot-dog-looking thing coated in white. Yes, you can place the stacks side by side, but then you’ve got what looks like a white brick. I’ve cut holly and stabbed stems into the sides (at Christmas). I’ve snipped pansies and nestled them along the sides (at Easter). No garnish works very satisfactorily. Then again, after the first slice — cut on the diagonal, to reveal (ah ha!) the “zebra” stripes — nobody cares about appearance. They only care about whether there’s enough for seconds. And for later, while no one’s looking.

So presentation is problematic. So what? The final, best, most important thing about icebox cake is that it’s a dessert that knows no season. Strawberry shortcakes arrive with spring, and black- and blueberry cobblers are summer’s naturals the way pumpkin and pecan pies are right for fall. Gingerbread and lava cakes say fireplaces and Valentine’s Day dinners. But icebox cake fits in with every season.