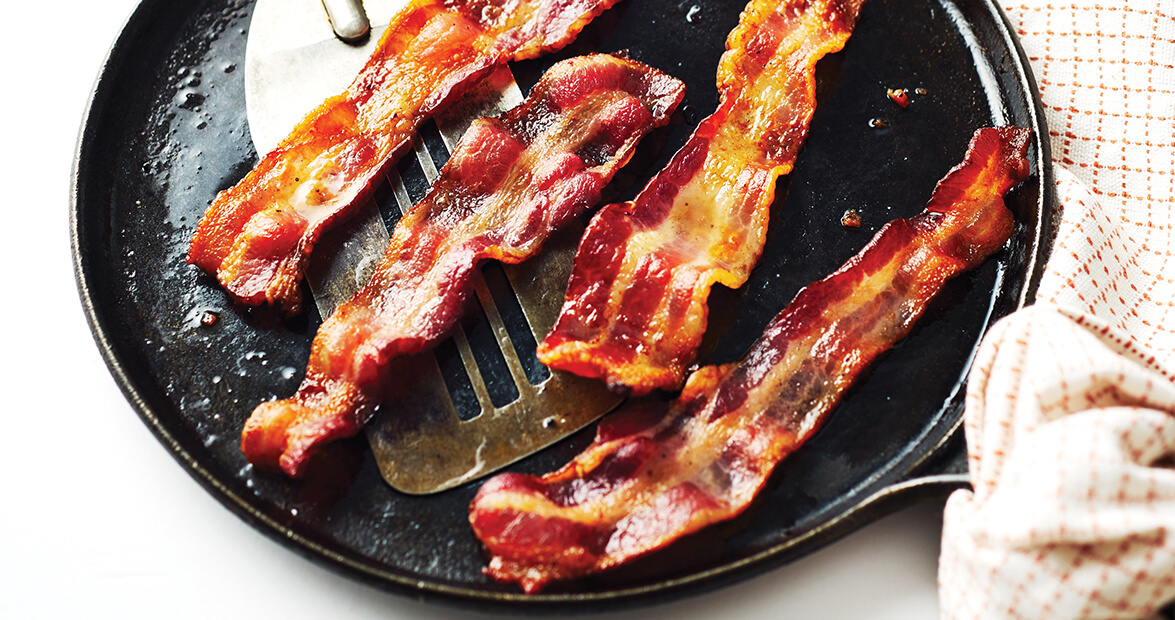 We’re becoming a nation of persnickety eaters, a Puritan populace for whom munching on a salad brings as much self-congratulatory joy as rescuing a kitten from a tree. One delicious food after another is being consigned to the trash heap of culinary history: pancakes, ketchup, frosting, even cheese. But there’s one delectable that has not and by all accounts will not become a casualty: bacon. Not gourmet and not quite grub, bacon occupies the democratic middle, the hallowed frying pan of our lives; it has a Proustian power, an ineradicable presence. It is loved like no other meat, a claim which is as broad as it is undeniable.

How can we explain its allure? You could say It tastes good and leave it at that, and that might be enough for you. The truth, however, is much more complex: Bacon is deep. You cannot overthink bacon. But I will try.

The persistence of memory. I remember weekend mornings asleep in my attic bedroom, not exactly waking to the smell of bacon, but being awakened by it. Similar to freshly cut wet grass, the smell of bacon can travel for miles and never lose its potency. It was just like the cartoons I watched at the time — Pepé Le Pew I remember most vividly — in which you could see the smells. They wafted through the air like spirits. They could corral you like a lariat. They could capture you. That’s what bacon did to me.

Half-asleep I would follow its scent downstairs and into the kitchen, and still half-asleep I would eat it until my mother slapped my hand. Save some for the rest of us. Only then would I open my eyes completely, a boy trapped in an unfeeling world where he had to share. Bacon is a time machine for me to this day. I smell it and it’s Saturday morning. My parents, dead now for many years, are seated around the morning room table. My beautiful sisters — one of whom is also gone — crowd around me, lunging for what is rightfully mine, for what I very clearly had dibs on, having been the first one down. But they strike as fast as copperheads.

Our dog Rudy, that little brown mixed-breed, long as a dachshund with the face of a beagle (we called him a dog, though no one was really sure what he was), hides himself beneath the table, as still as a jungle animal, hoping for crumbs. Everyone is happy, everyone is young. Life is something that is just about to happen, and it’s all good.

This is what bacon does to me.

The simultaneity of opposites. Eating bacon is like dating Taylor Swift: It may not be good for you, but people just keep coming back for more, understanding that a life with a little bacon in it beats a life with no bacon in it at all. Bacon is full of saturated fat and salt, and yet, unlike other foods, bacon makes no secret of it. Bacon is honest.

Maybe this is one reason we’ve seen an increase in the popularity of bacon and bacon-related recipes, such that we can now be said to be experiencing a bacon mania. Those of us who were raised on a farm might count a piglet as a dear first pet and eat him later. That’s because bacon is stronger than love itself.

I wasn’t raised on a farm, but, rather, in front of a television, and yet I, too, counted a pig as my first virtual pet: Arnold Ziffel, on Green Acres. But that changes nothing. I would eat him if he were bacon. Because bacon is not just bacon. It’s bacon ice cream, bacon-infused vodka, chocolate-dipped bacon — and more. It’s the meaty part of our culture. It’s the salt of our earth. It’s the fat of our land.