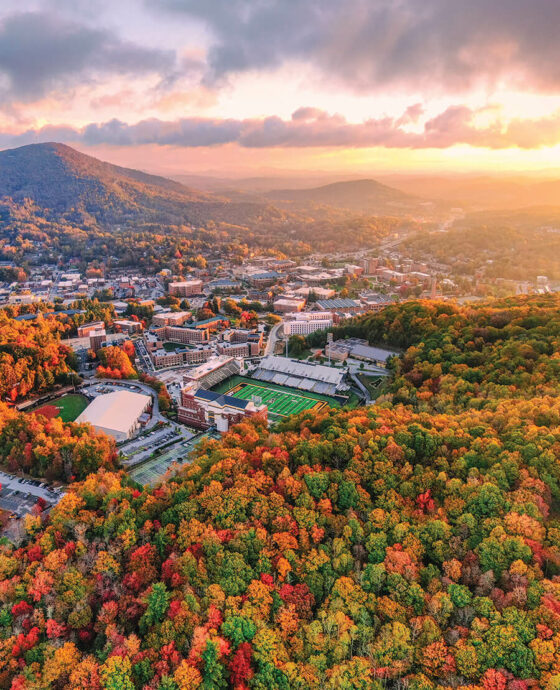 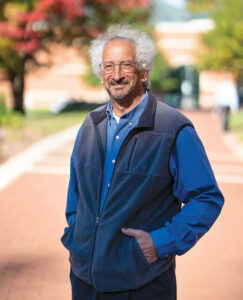 On almost any given October morning, Dr. Howard “Howie” Neufeld can be found cruising along the Blue Ridge Parkway en route to Doughton Park or one of the other mountain spots renowned for fall colors. That’s him with the gray, fluffy hair in the Subaru Forester, singing along full-throated to Fiddler on the Roof.

“I wish I had the talent to be on Broadway,” Neufeld says.

He may not perform show tunes professionally, but Neufeld has landed a role in a different kind of show: an annual spectacle starring the kaleidoscope of autumn leaves that line our mountain highways, byways, and, of course, the parkway.

Known as the “Fall Color Guy” on his popular Facebook page, Neufeld, a biology professor at Appalachian State, has done research on anthocyanins — the pigments that cause leaves to turn red. For the past 11 years, Neufeld has posted photos and descriptive captions on Facebook about the most brilliant fall colors — and where to find them — for eager travelers who view him as nothing short of a fall color fortune-teller. 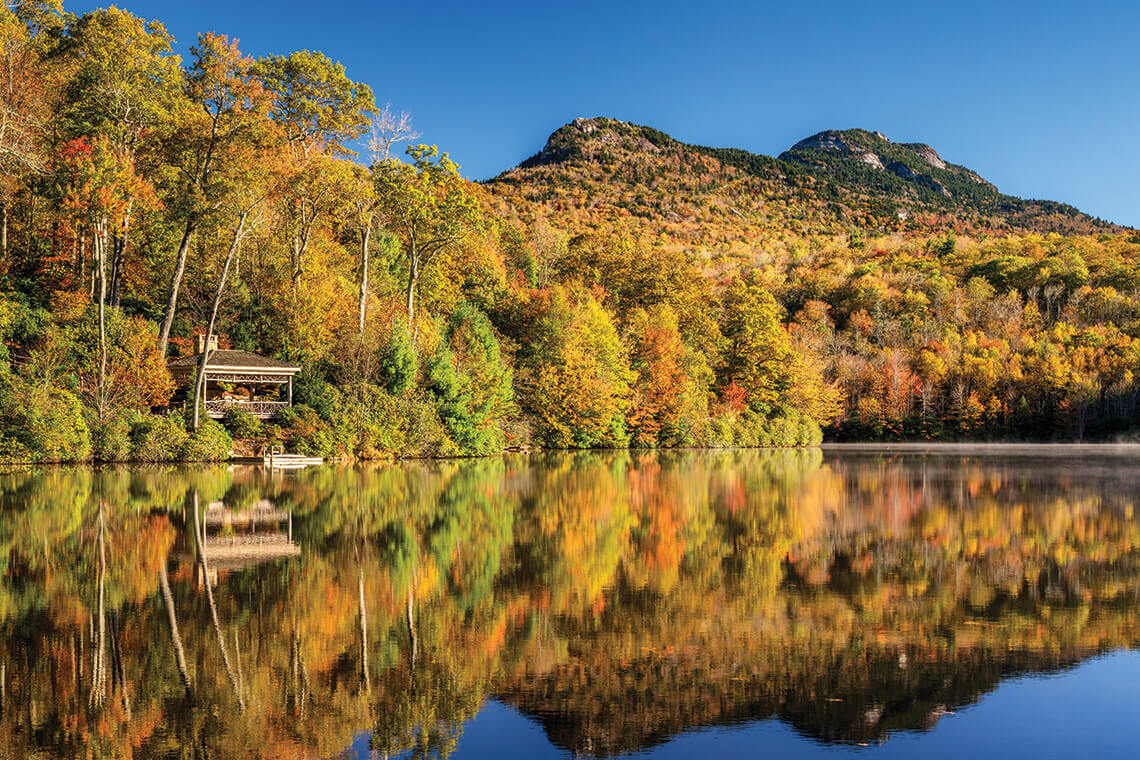 Dr. Howie Neufeld scouts where fall colors are peaking so that leaf peepers know when to visit spots like the lower slopes of Grandfather Mountain. photograph by Craig Zerbe/iStock/Getty Images Plus

“I’m heading to the Pigeon Forge area on October 27, will the leaves still be beautiful then?” one Facebook follower asked. “Any good hiking spots for viewing fall colors on the first weekend of October? We stay close to Boone and Blowing Rock,” another person wrote. Neufeld’s replies: The leaves at Pigeon Forge around October 27 are typically lovely, and Beacon Heights and Elk Knob State Park are great fall hikes near Boone.

Armed with his phone camera and blaring show tunes, Neufeld hops in his car in the early morning hours to scope out fall colors, then returns to his desk to record his findings on his computer. “I rarely take notes while I’m out there, but I keep it all up here,” says Neufeld, tapping his temple with his finger. “I always start my reports by letting people know where the trees are turning and when the best time to take pictures might be — and I like to end by telling people where I’ll be the next week, and where the colors are going to be most spectacular.” A biologist at heart, Neufeld laughs and adds. “Sometimes, I’ll throw in the scientific name of a tree so that my Facebook followers are learning a new fact. But I know that they’re really there for me to tell them where to drive on the parkway that weekend.”

Neufeld doesn’t receive compensation for his work as the Fall Color Guy on Facebook, but he reaps the reward perennially: enjoying the autumn hues and helping others appreciate them. Neufeld could wax poetic about fall colors in general, but one tree species in particular is his favorite. “Sourwoods have a spray of flowers, and, in the fall, the seeds of the flowers turn a shade of white,” he says enthusiastically. “They also have long leaves that redden up in the fall and turn a deep burgundy color. So you have this red background with white seeds cascading down, and it’s just striking. To me, that’s the one tree that distinguishes the South’s fall colors from the North’s.” 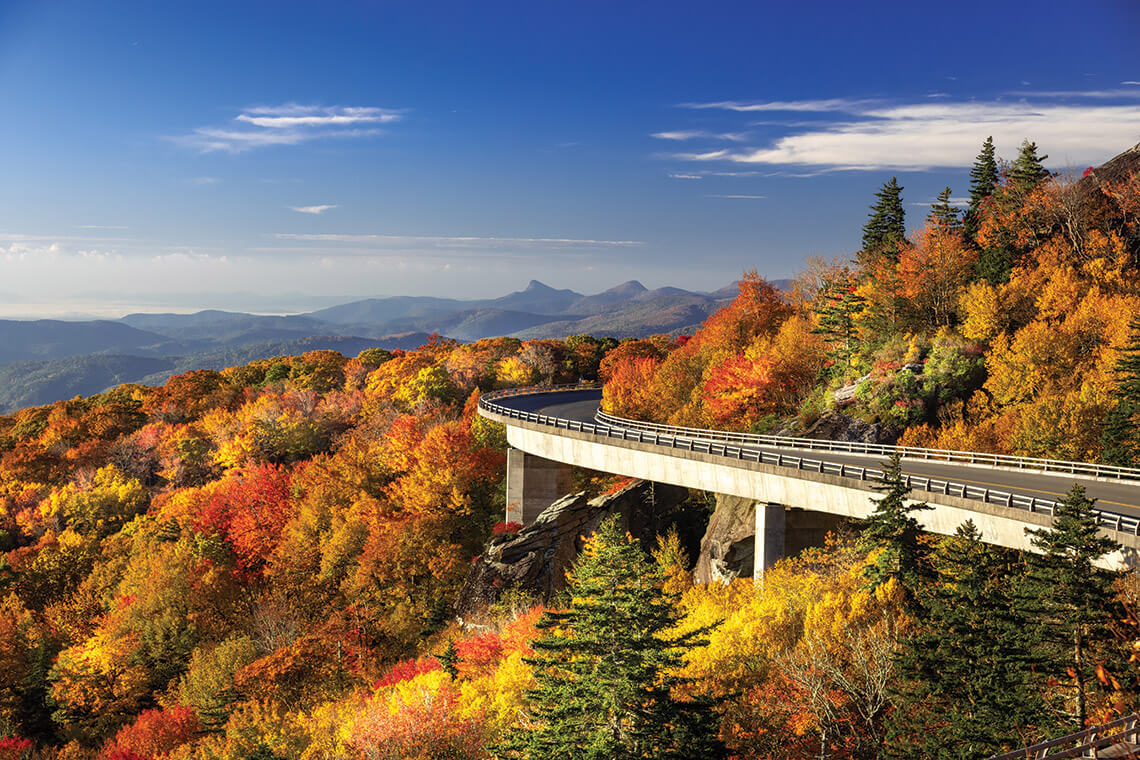 A marvel of engineering, the 1,243-foot-long Linn Cove Viaduct on the Blue Ridge Parkway gracefully winds its way around the enormous face of Grandfather Mountain. photograph by Jared Kay

And lengthy it is: Because North Carolina’s mountains vary greatly in elevations, the state’s fall color season lasts for six to eight weeks, with the highest peaks seeing color first. This year, Neufeld will begin his fall color tour in early October at Mount Mitchell State Park. Among other places, he plans to drive the Linn Cove Viaduct and then visit Blowing Rock in mid-October.

His fall color reporting will come to an end in November near the Piedmont — usually at Stone Mountain State Park. He doesn’t know exactly where he’ll end up, instead letting the leaves that are most colorful guide him — and he won’t need a GPS to get there. “By now, I know where I’m going. Most of the time, I stay on the main roads, where I think people are going to go, and there are a few country highways that I take here and there,” Neufeld says.

So if you’re out leaf-peeping one morning this fall and you spot someone tooling along under a gorgeous canopy of leaves and belting out what sounds like “If I Were a Rich Man” for an audience of zero, you very likely have crossed paths with the one and only Fall Color Guy.

Click here for weekly updates on changing leaves at 25 of our favorite mountain spots.

Read more about the High Country:
Nature’s Art
On the Trail of Faith & Frescoes in West Jefferson