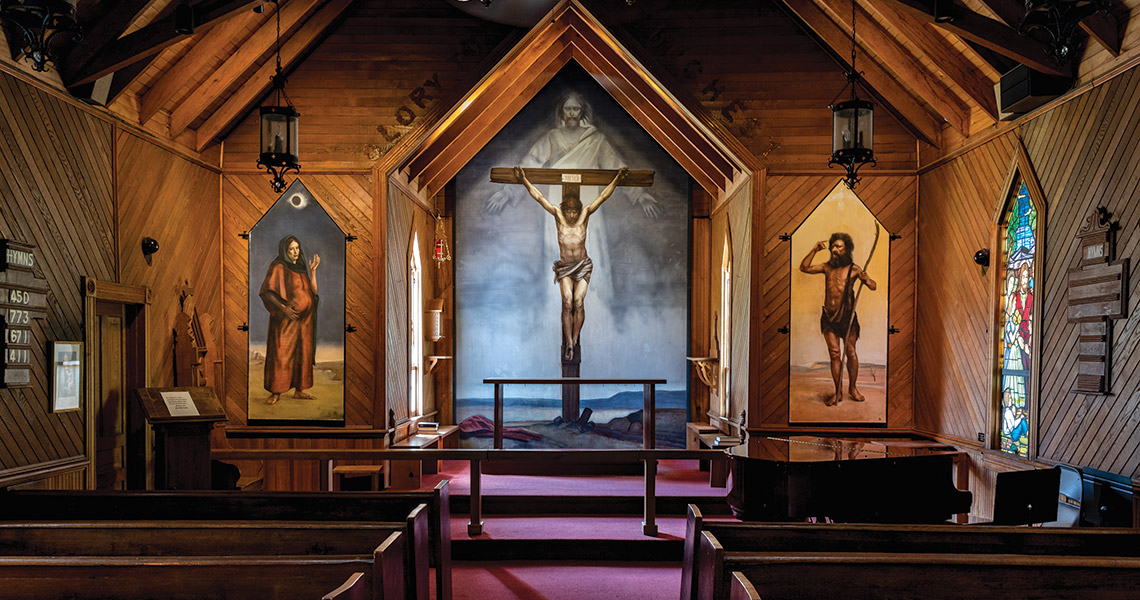 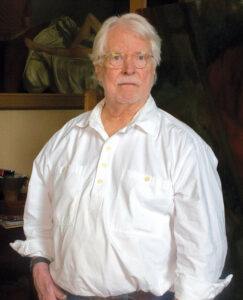 Start with the light. Even on an overcast day, a soft glow seems to rise from the two windows that frame The Mystery of Faith in St. Mary’s Church in West Jefferson. This is my first stop on the High Country Fresco Trail, a collection of mountain churches where artist Benjamin F. Long IV created stunning Biblical images in an intricate and now largely forgotten art form. The trail attracts pilgrims both artistic and religious — as many as 50,000 a year, at least pre-Covid — and is as important to art historians as it is to seekers of grace. But I’m not thinking about any of that. I’m thinking about the light.

St. Mary’s is a tiny thing, a toy box of white clapboard and green trim, a leftover scrap of true faith and right angles that sits on a country road just past an Ingles and a Dollar General. When a truck rumbles past, the chestnut boards creak like a ship at sea. It feels antiquated, but no less holy for it. West Jefferson describes itself as “quintessential Americana,” and, with its shops and murals along shaded streets, it’s hard to argue with that. There are boutiques and restaurants, a brewery, and even a cheese plant where you can snack on their famed curds.

There’s a gentleness to the place, and as you drive north into Ashe County, the land seems to soften as subtly as it greens. There is less verticality, more give, and, of course, the softening light that now seeps through stained glass to warm the deep blush of the church’s carpet. 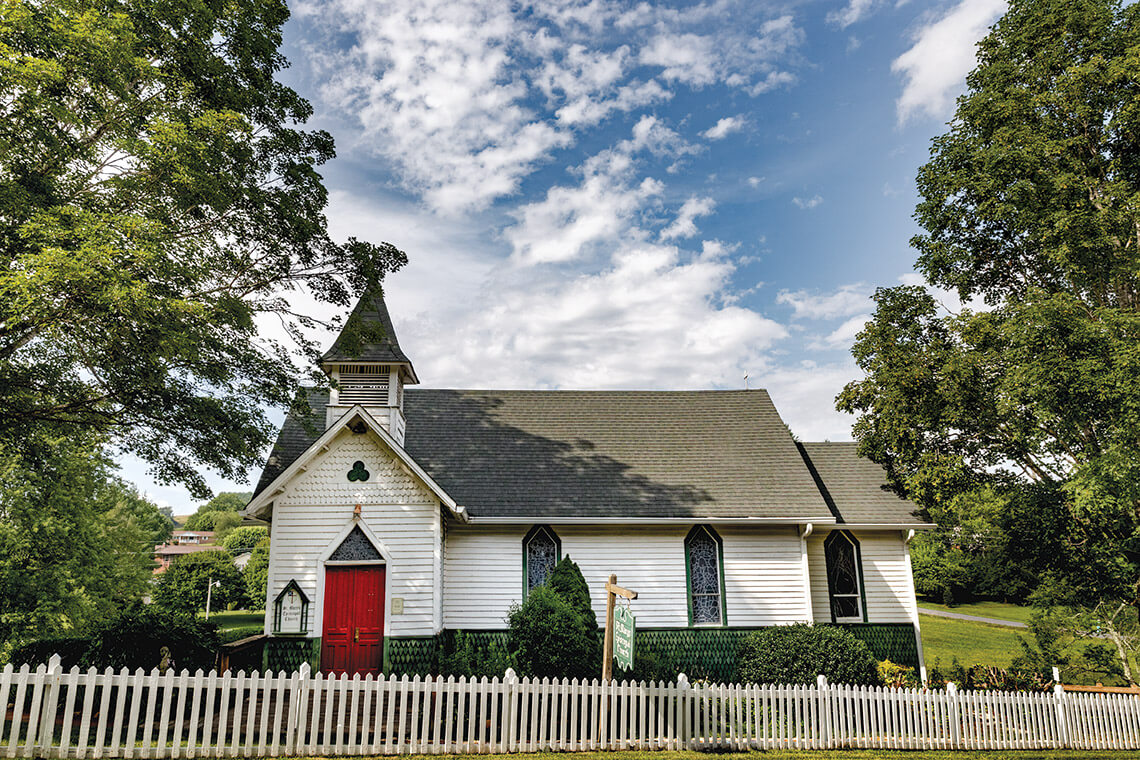 The humble exterior of St. Mary’s Church belies the fact that it is one of West Jefferson’s most popular attractions. photograph by Charles Harris

Inside St. Mary’s, the building is empty this morning, though there is very much a sense of presence. At the front, Christ hangs on the cross, while behind him, his ghostly double spreads his hands in — is it welcome? Forgiveness? Whatever it is, it’s difficult to take my eyes off of it, the ways the image seems lit internally, the way it seems to lean out over the altar rail, to almost float. By their very composition, frescoes reflect light differently than paintings. In its most basic form, a fresco is a mural painted on lime plaster while the plaster is still wet, so that the painting isn’t so much on the wall as in it.

To the left of The Mystery of Faith is Mary Great with Child. Long painted it first, in 1974, and not without some controversy — to many, a pregnant Mary was a scandalous thing. There’s a story here, too: The model was said to be a mysterious young woman whom no one in town knew. Her name, of course, was Mary. The story sounds too good to be true, and Long confirms that it is. In fact, Mary’s body was based on Long’s pregnant wife. As for the hands, feet, and head? They were based on “a lovely young woman who worked at the Pizza Hut.”

To the far right is the hairy, haggard figure of John the Baptist, painted next, in 1975, and modeled on Bo Bartlett, Long’s student, who would go on to become a painter of renown. Taken together, the three are meant to represent the life of Christ, and, along with The Lord’s Supper, about 10 miles away at Holy Trinity, they represent the frescoes of the Episcopal Parish of the Holy Communion, a still-vibrant church community. There’s also a fresco in the E.H. Sloop Chapel at the Crossnore School near Linville and two depictions of the life of Paul in St. Paul’s Episcopal in Wilkesboro. That is the Blue Ridge church fresco trail: eight frescoes, three churches, two chapels, and a path for pilgrims that is unlike any other.

The fresco is an art form that now largely goes unpracticed, but that wasn’t always the case. Usually associated with Italian Renaissance painters, frescoes once flourished all over the world. But by the time Ben Long finished his service in Vietnam, the form was practiced almost exclusively in Italy. Long had studied creative writing at UNC Chapel Hill, and headed north after college to become a member of The Art Students League of New York. But the draft loomed, and in 1966, he volunteered for the Marine Corps. After Vietnam, Long would spend almost nine years as an apprentice to Maestro Pietro Annigoni, who was painting frescoes in Florence.

Long learned his trade with great care: the plaster, the planning. How, if you look closely at a fresco, you can see the “day lines” — the traces that mark the extent of an artist’s work on a particular day. When he returned to the United States, Long inquired with churches in his hometown of Statesville about painting a fresco. He asked churches in Hickory, Asheville, and Charlotte, and the answer wasn’t so much no as what? And it wasn’t just that they had no idea what he was talking about. Plaster is a heavy medium, and “most of those churches weren’t even built for that kind of painting,” Long says.

Then, a happy coincidence occurred.

Long met Father Faulton Hodge at a party of a mutual friend in Blowing Rock. Father Hodge was young and energetic, “a spirited character who always had something going on,” Long says. Most important, he was priest-in-charge of the newly revived Parish of the Holy Communion — and he was agreeable to the idea of adding Long’s frescoes to the walls of parish churches.

At Holy Trinity Church, the sun is out, and light glistens on the shrubs. The church dates to 1902 and sits on a peninsula of green, clean-lined and wood-shingled, with the sort of rustic grace that doesn’t undermine its beauty so much as remind you of it. The stone walkway is lined with fresh mulch. On the far corner of the property, a cascade of mountain laurel is in full and magnificent bloom. Driving over from West Jefferson, the highway parallels the New River for part of the journey. Just days prior, it ran bony and clear, but 24 hours of rain have turned it into T.S. Eliot’s “strong brown god,” white-capped and spilling onto its banks.

Doug Worsham, the church docent, waits inside. Kind and remarkably knowledgeable, he leads visitors past the paneled walls and beneath a vaulted plaster ceiling ribbed with wood beams. Besides the fresco, the church is a treasure of art — frescoes by Long’s students and a mosaic of Christ — and Worsham knows every nuance and inch. And there, on the back wall, The Lord’s Supper. 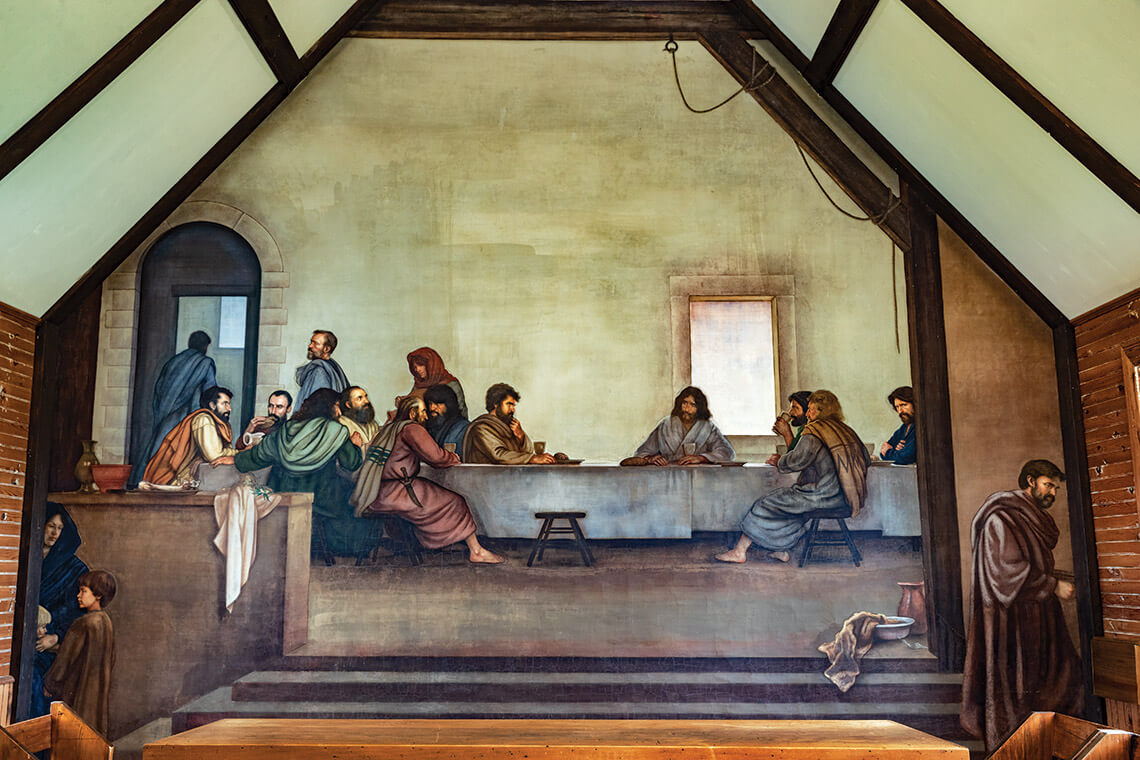 The Lord’s Supper, behind the altar at Holy Trinity Church, took Long and 20 of his students three months to complete. photograph by Charles Harris

The fresco takes up the entire wall, so much so that it appears that the wall has actually been removed in favor of an entryway that opens onto a crowded room in first-century Palestine. The apostles span the length of the table: Jesus right of center, Judas’s back visible as he exits, moving as one would expect him to move when he has just been told, “What you are about to do, do quickly.” They have been caught seemingly unaware: the meal consumed, the plates cleared, before them bread and wine and the man they will soon hand over to history.

Yet this is no abstract depiction. The disciples are distinct: There is Simon Peter staring intently at Jesus; there is Doubting Thomas staring incredulously at us. On Jesus’s left shoulder is a square of light, a window that almost, but not quite, frames him. A dog sleeps on the steps while a woman pours wine. There is the sense of what is coming, the sense of held breath. Here is a liminal moment, a fissure between what is and what will be, and it is that sense of inevitable movement, that sense of temporality that gives the fresco such power. 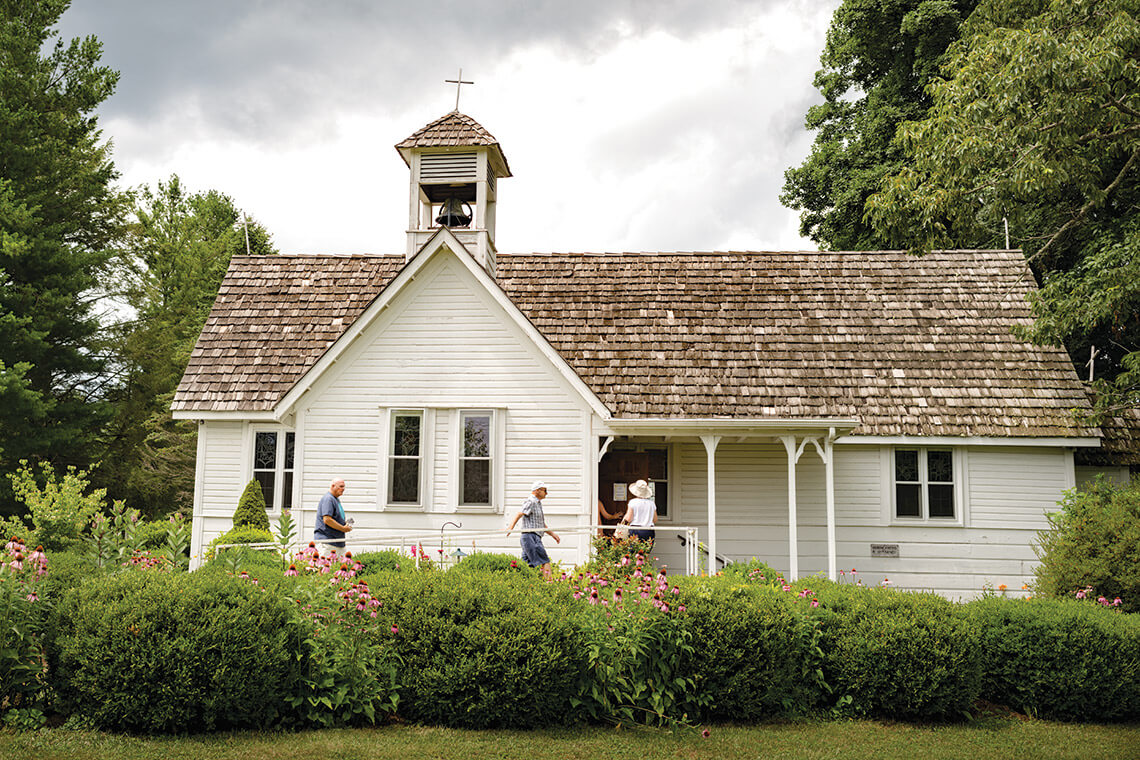 The Episcopal Parish of the Holy Communion is one parish with two churches: Holy Trinity (pictured) hosts services on odd months, St. Mary’s on even months. photograph by Charles Harris

Long painted the mural over the summer of 1980 with the help of 20 or so assistants. Again, there was the whiff of controversy, this time rumors that it would be a nude Last Supper.

Early in the summer, the assistants were drawing two nude models to learn anatomy — a common practice — and someone must have seen them. 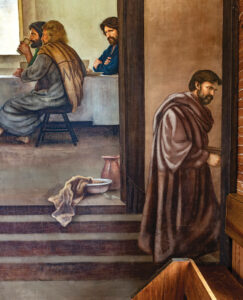 Look closely at The Lord’s Supper, and you may recognize locals in the fresco. Look closer, to the right of the foot-washing bowl, and you’ll find a dedication that Long made to his father, who died just as the fresco was being completed. photograph by Charles Harris

“Maybe the Baptists across the street,” Long jokes. “They weren’t angry about it. But word certainly got out.”

Soon enough, though, the community was won over. Locals showed up with food. Others volunteered as models — a boon, Long says, because “there were some local people who certainly looked like prophets.” After the work was completed, word of the fabulous frescoes spread fast. Pilgrims came, as did scholars of art.

Since the frescoes opened to the public, the number of people who visit them consistently swells over the summer and peaks in October, when the mountain roads are crowded with leaf-peepers. But there’s no bad time to visit.

There may be no good time to leave, either.

There’s something hypnotic here. The green of the trees. The soft air. And that light, clear and brilliant and — in the presence of Ben Long’s work — seemingly everywhere.

Read more about the High Country:
Nature’s Art
In Search of Fall Color