In the pristine community of Linville, a profusion of snowball bushes glows as if lit from within. Saucer-size, ruby-colored dahlias nod in the early sun. We are passing through on the way to Grandfather Mountain. The weather is perfect, but by the time we reach the summit, a 35-mile-an-hour wind jerks open the car door and blusters cold fog into our faces. We head, half blind, to the swinging bridge. Parents coming toward us lean into the gusts as they shepherd their children back to the parking lot. No one is setting foot on the bridge. Instead, families hold hands, lest some little one catches a blast and lifts off like a kite.

And so it is that Grandfather — the product of a collision of ancient gray stone heaved up and hurled more than 60 miles — is still the most rugged and unpredictable mountain in the High Country. I have studied his rock face for nearly 50 years. 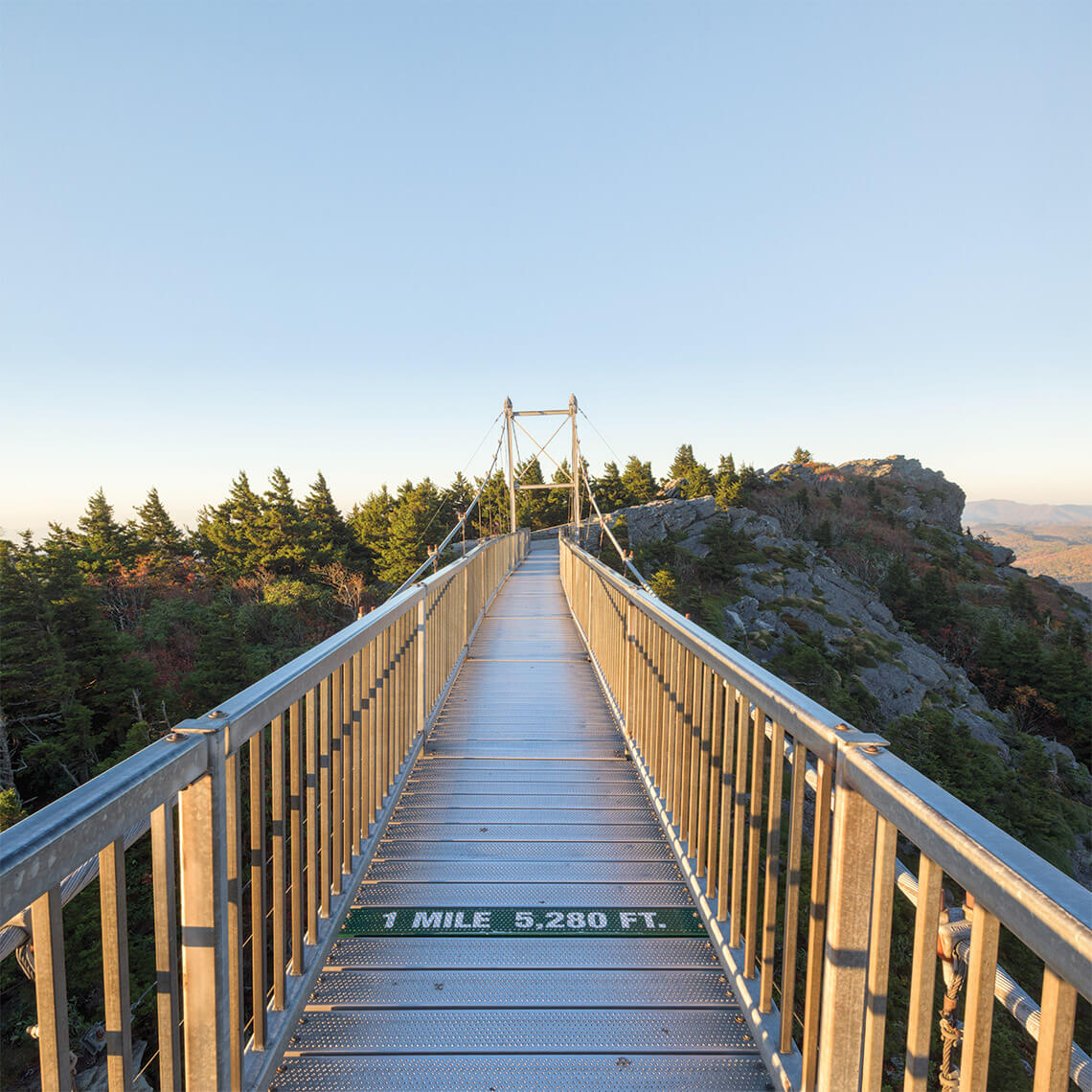 Many a shaky knee has traversed the 228-foot-long Mile-High Swinging Bridge at Grandfather Mountain. photograph by Mark Vandyke

Grandfather and the surrounding peaks retain botanical secrets that 18th- and 19th-century explorers — André Michaux, Asa Gray, and others — hoped to unlock as they scrambled through laurel hells, waded through cold creeks, and collected never-before-seen plant specimens, now stored and studied in botanical collections across two continents. Grandfather’s nearly 5,000 acres harbor 16 distinct ecological communities and 72 rare or endangered species. The plant names are poetic — Gray’s lily, Heller’s blazing star, and trailing wolfsbane. There’s a mollusk called the velvet covert, a lichen known as rock gnome, and a butterfly called Smyth’s green comma. Scientists around the globe consider Grandfather to be a precious refuge for the region’s unusual biodiversity. Over and over, artists have painted the old man’s craggy profile, best seen from NC Highway 105 on the way to Boone.

And nowhere are fall colors more vivid than from the Blue Ridge Parkway, looking up toward the summit of Grandfather. The gray rock outcrops on his southeastern slope provide a painterly contrast to the electric leaves of autumn — the yellows of poplar and mockernut hickory, the gold and orange coins of serviceberry, the early burgundy dogwoods, and the spires of deepest evergreen.

As a college student in the 1970s, on my first night ever camping in the High Country, I fell in love with the crisp air, the closeness of the stars, and the astonishing rocks that rose around us. Back on the parkway the next day, I could not stop staring at one long brushstroke of red oaks, tall and vivid, about halfway up Grandfather’s steepest flank.

I would return again and again to this stretch between Julian Price Park and Blowing Rock, often to hike the short Green Knob Loop that begins at Sims Pond, a perfect mirror of the teeming habitat beyond. At first, the trail descends along the creek that feeds the pond, surrounded by old-growth hemlock, maple, beech, and rosebay rhododendron. Then, the sunstruck stream goes dark, ducking under the parkway. The trail turns away from the water to ascend through a cattle gate and across a pasture patrolled by darting goldfinches, chickadees, and juncos. Lichen-crusted arrows carved on stone posts mark the meandering turns back and forth up the field to a high ridge.

Then, at the top, there’s Grandfather again, straight ahead, backlit by late afternoon sun. I wave to him and descend into the damp forest. The trail finally opens into a meadow thick with joe-pye weed and thistle — blooms alive with feasting butterflies, their wings blinking like strobes. 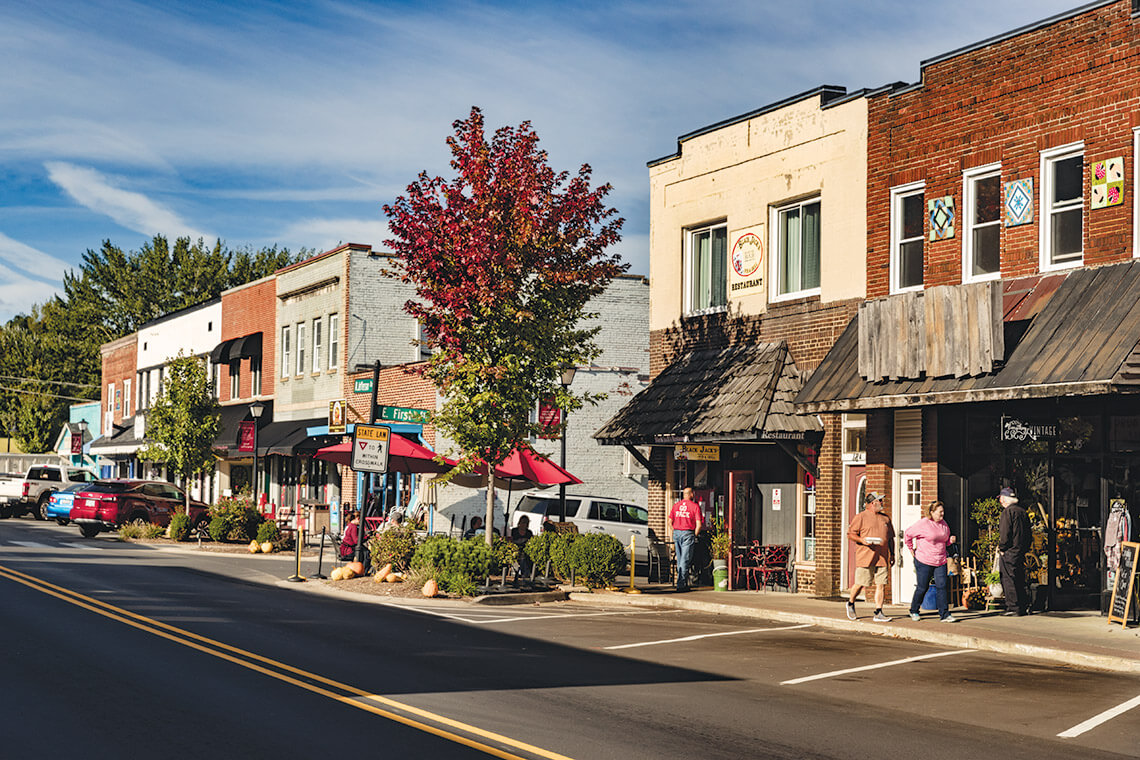 The main drag in West Jefferson is a trove of mountain art, crafts, antiques, and restaurants. photograph by Charles Harris 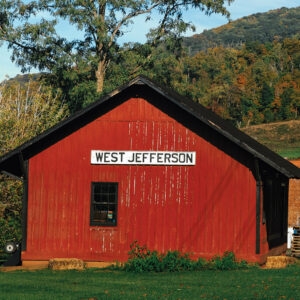 Along the roads outside of town, the art extends to barns and other structures. photograph by Charles Harris

Nowadays, the New River draws me farther north to the grassy balds of Ashe County. And I must admit, at 68, coasting is more my speed. Near the tiny town of Todd, the Railroad Grade Road provides a flat, 10-mile bike route beside the New River to the community of Fleetwood. The farmstead vistas along the way are reflected in the paintings and photographs by local artists that are displayed in the galleries I love to wander in downtown West Jefferson.

Grandfather’s visage, in all his unpredictable storms and stony glory, is always among the rendered landscapes. As I pass him on the parkway once again this October, I will look up to find those blazing red oaks — a marker of something both certain and ephemeral over so many years.

Read more about the High Country:
In Search of Fall Color
On the Trail of Faith & Frescoes