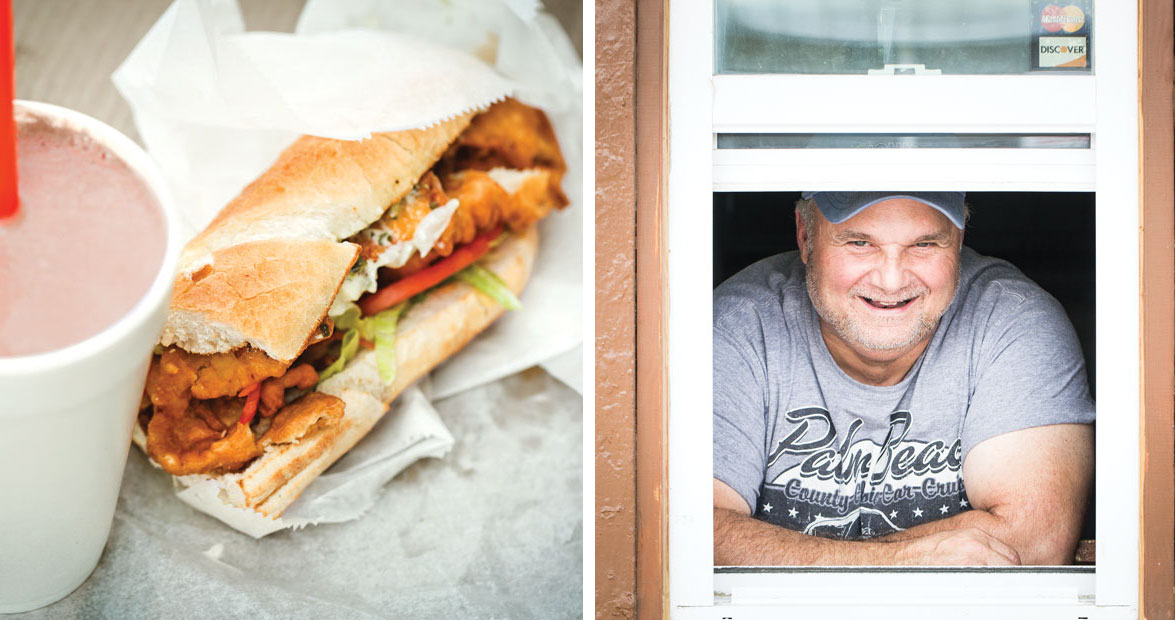 Editor’s Note: This story was published in 2017.

I was standing at the window, ready to place an order for my family at John’s Drive In, when my daughter, Hannah, said she wanted a banana-chocolate-Oreo milkshake and a Dolphin Boat, the fluffy-fried fish plate John’s is famous for. When I looked over at her, an unexpected flood of nostalgia washed over me. I could see myself when I was her age, barely 21, having just moved to the Outer Banks, standing there ordering the same thing from the same window in the same small, white building on the beach road in Kitty Hawk. For a moment, I was lost in memories made stronger by the scent of fish, fries, and burgers mingling with the beach air.

In the late 1970s, when I first went to John’s Drive In, John Tice Jr., who now runs the place, was still a teenager helping his parents get food out to the lines of people. I remember his mom, Ms. Pat, taking orders and his dad, John Tice Sr., always standing with his back to the ordering window, working on the tickets that flowed in from the lines outside. Today, John Jr. stands where his father did for all those years.

Like his father, John takes breaks from cooking every now and again to greet the new and old friends who come by, to tell them how much he appreciates seeing them, and maybe to snap a picture that he then tapes to the big glass windows on the sides of the building. It’s a point of pride among regulars to get your picture up there. My family and I made it into the collage back in the early 1990s — my husband and I, along with Hannah. She and her husband now bring their 2-year-old daughter, Mira, for fries and milkshakes.

John is proud that a customer’s experience today is very much like it would have been decades ago. The recipes he uses are the ones he and his parents created, then perfected, through the years. He still sources local fish and produce, and he’s still proud that the hungry folks who line up outside might think they’re getting fast food when they’re really getting quality, cooked-to-order food.

John Sr. was originally looking for a much bigger restaurant to buy back in the ’70s, but when he discovered this place, which was then a Dairy Mart, his thinking shifted. He and Pat liked the location and the simplicity of it. And they figured it would be an interesting challenge to serve the same quality food you’d expect from a sit-down restaurant, only more affordably. They raised John and his two sisters, Romona and Tina, right along with the restaurant, and each of them had their role in the business. John laughs about the fact that, when he was a teenager who regularly skipped classes at Manteo High School to surf, his mom would mete out her punishment for such shortsighted shenanigans by repeatedly threatening to fire him from his regular job at the drive-in, yet demanding that he be up at dawn to clean fish.

Just as the regulars at John’s Drive In are loyal followers, so, too, are the employees. Several of them have been at the restaurant long enough that they raised their children right alongside John Jr.’s daughter, Amanda, who used to sleep in french fry boxes while her dad and grandparents were running the show. Young employees carpool to work after school. Other kids who had their first summer jobs at John’s have returned year after year, sometimes well after graduating from college, because it’s a place where they’re able to become part of an extended family.

“Dad and Mom taught us all to take care of each other. They included the folks who came here to eat in that circle along with anyone who worked with us,” John says. “Now, when I look out the window and see another restaurant owner coming to eat at my place, or recognize visitors year after year, or see the same locals come back time after time, I understand what they taught us. No one would keep coming here if we didn’t take care of them, if we didn’t show them that their being here at John’s matters to us. Really matters.”

As the busy summer season reaches its peak, John and his crew are having fun celebrating 40 years in business with the hundreds of guests, both seasoned and new, who come to John’s Drive In. He shows me the T-shirts, hats, and bumper stickers they’ve printed to help commemorate the anniversary. And he’s very proud of the big new John’s sign on the roof that looks like the one I knew from 1977.

One day when my granddaughter is a little older and will remember, she, her mom, and I are all going to show up at that window and order a Dolphin Boat and the best of all milkshakes. It will be one of those gorgeous, hot summer days when my daughter will say, fairly out of the blue, that a ride up to John’s would be the perfect thing to do right now. We’ll sit there at that picnic table, enjoying our food and that simple, perfect time together, and I’ll ask John Jr. if he’ll consider putting that picture on the wall.

Note: John’s Drive In came under new ownership in 2020, but the classic menu — from Dolphin Boats to milkshakes — is still the same.