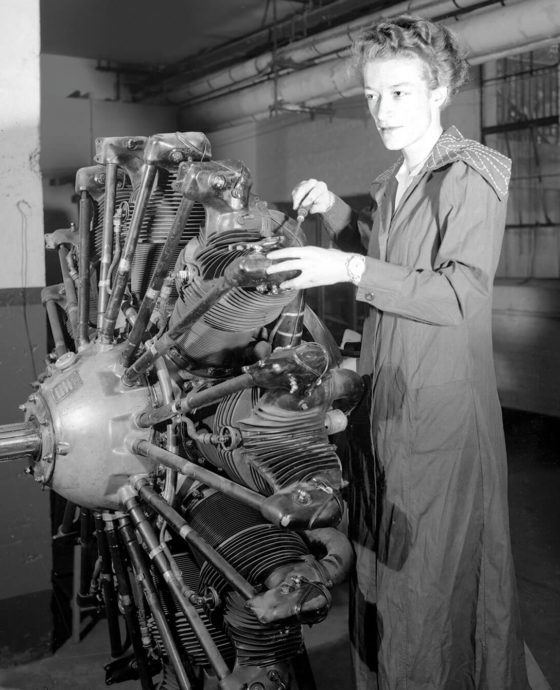 “Why do people want to know about me?” a 20-year-old Katharine Stinson asked a reporter in 1937. “I haven’t done anything yet — maybe I never will.”

Here’s what Katharine Stinson did.

When she was 10, she flew for the first time. Growing up in Varina, now Fuquay-Varina, she’d been obsessed with planes, building little models with balsa wood and rubber bands. In 1927, a famous pilot named Eddie Stinson (no relation) took her for a ride in his closed-cockpit plane. She never wanted to get out.

Then, when Stinson was a teen, Amelia Earhart came to Raleigh. She landed at the municipal airport, where Stinson was working as a mechanic’s assistant in exchange for flying lessons. “Don’t become a pilot,” Earhart reportedly told her. No money in it. “Become an engineer,” she advised.

In 1936, Stinson applied to North Carolina State University’s engineering program, but the college told her that it didn’t admit women as freshmen or sophomores. So, Stinson completed two years’ worth of courses in one year at Meredith College, and in 1937, she got into State. At the time, she was the only woman in the School of Engineering. “The professors told me frankly that they would make it hard for me,” Stinson said, “and they did.”

Still, in 1941, Stinson graduated and became the first woman to earn an engineering degree from NC State.

Then, she became the first female engineer for the Civil Aeronautics Administration (now the Federal Aviation Administration). Sometimes, she’d test-fly planes with defects to figure out how to fix them. She was eventually promoted to a senior level at the FAA, investigating plane crashes. She also helped found — and later became president of — the Society of Women Engineers. In 1954, when the society was still new, it had about 400 members. Today, it has 40,000.

During her lifetime, Stinson received a number of awards recognizing her achievements in a male-dominated field. But she always preferred her legacy to be about her hard work rather than her gender. “I never thought about the fact that I was the only woman, because I never saw any women,” she recalled of her early days at the CAA. “I just wanted to be a good engineer.”