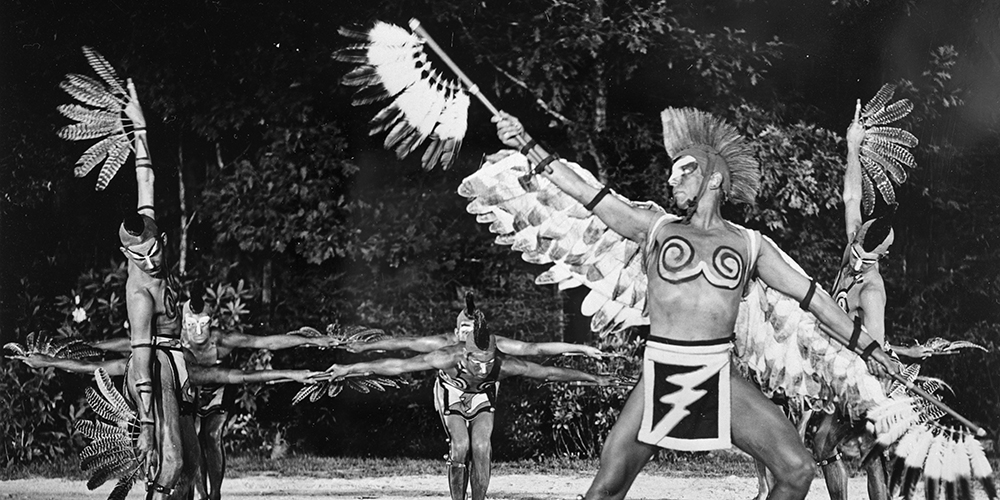 For the Eastern Band of Cherokee Indians, the mountains are sacred and eternal. The land is majestic and beautiful — also, rugged and remote. Surviving and prospering in such vertical country has been the challenge of generations. They call their mountain home Land of Blue Smoke.

The sovereign nation, which encompasses nearly 100 square miles in Jackson and Swain counties at the eastern gateway to the recently formed Great Smoky Mountains National Park, has a proud and stubborn legacy. In 1838, the U.S. government force-marched more than 16,000 Cherokees west to Oklahoma from their ancestral lands in Georgia, Florida, Alabama, Tennessee, and the Carolinas. Along the Trail of Tears, some 4,000 died.

But the Qualla Cherokee, native to the mountains of western North Carolina, argued successfully that they had severed ties with the Cherokee Nation by the Treaty of 1819 and therefore were exempt from the removal order. They refused to leave their home, the main settlement of which was Qualla Town — now the town of Cherokee.

The heart of their nation remains the Qualla Boundary, purchased by tribal members during the 1840s and 1850s. Though federally protected, it was never really a reservation by the usual definition — though it is called such — because the land never belonged to the U.S. government. In 1940, about 2,200 tribal members live here. 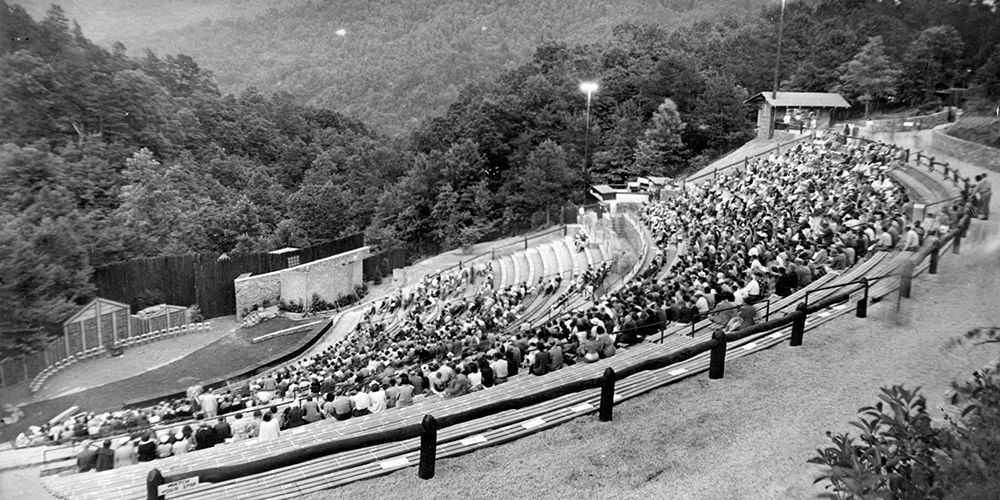 Unto These Hills tells the story of the Cherokee, their achievements, and their sacrifices. The Mountainside Theatre has hosted the production for almost 70 years. photograph by State Archives of North Carolina

The 1930s have been a time of hardship. Asian blight has nearly wiped out the great forests of chestnut trees on the Qualla Boundary, and timber harvesting has fallen off. Farming, always difficult in such steep country even in the best of times, can’t fully support enough families — only about 5 percent of Cherokee land is arable. Also, much of the Boundary has been hunted out; it’s hard to bag even squirrels and woodchucks for the supper pot.

As the 1940s near, two strong-willed men, raised in the same household, are trying to pull the tribe toward very different futures. To survive these hard times, to keep their homeland inviolate, to provide for the well-being of their people, the Cherokee face some big decisions.

The Cherokee keep their beloved mountains, but the mountains are losing Cherokee men to outside wage work in factories and steel mills. The buildup for war accelerates the exodus: About two dozen men leave to work at Fort Bragg, and another 260 are hired to build the Fontana Dam on the Little Tennessee River not far from Robbinsville. For too many on the Qualla Boundary, there is just no steady livelihood to be had.

The opening of the national park promised a new boom closer to home, thanks to tourists keen to discover Cherokee culture, but it has hardly begun before the war brings rationing of gas and rubber tires, and the parade of automobiles stops.

And roads are sorely lacking. One road in particular has been the cause of much of the division within the tribe: the Blue Ridge Parkway — the last unfinished 15 miles of which are to pass through the Qualla Boundary. 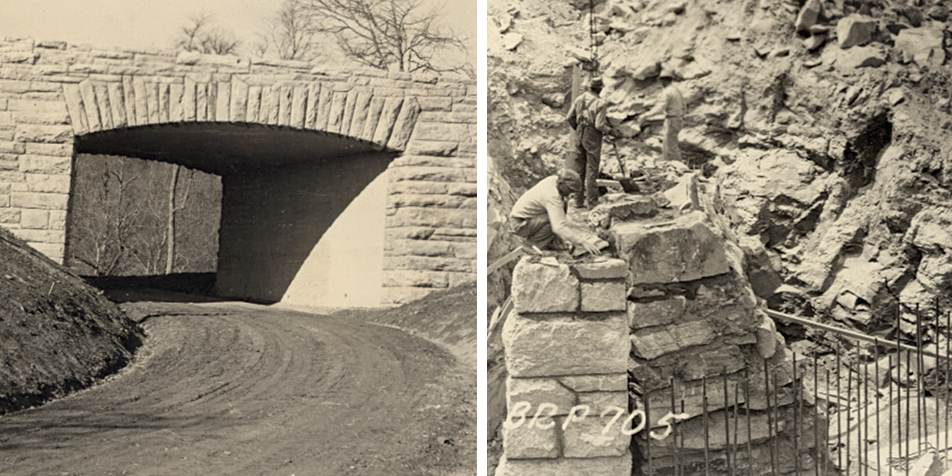 The parkway is a federal project, so claiming a right-of-way through a federally protected reservation of a federally recognized tribe should not be difficult. But because the Cherokees own their land as a corporation under a state charter granted to Chief Nimrod Jarrett Smith in 1889, the lines of jurisdiction are murky.

Furthermore, Harold Ickes, the Secretary of the Interior, has made it clear that he won’t proceed without the Cherokees’ support. In his “Message to the Cherokee Tribe,” he writes, “If you do not want the road to be built where the National Park Service desires it to go, it will not be built.”

At first, the Tribal Council votes approval. The new highway will connect them with Asheville and revive the tourist trade, so they grant a 200-foot-wide right-of-way through the Soco Valley — where they already plan to build a road. When the council learns that the proposed right-of-way is 1,000 feet wide, they rescind their approval. Such a broad swath of land would claim nearly the entire valley, one of the rare flat areas suitable for farming. And no commercial development would be allowed along it — thus no tourist dollars for the tribe.

Chief Jarrett Jaldijula Blythe, first elected in 1931, wants the parkway — and the prosperity it will bring. He is remarkably popular and trusted by Cherokee and whites alike. 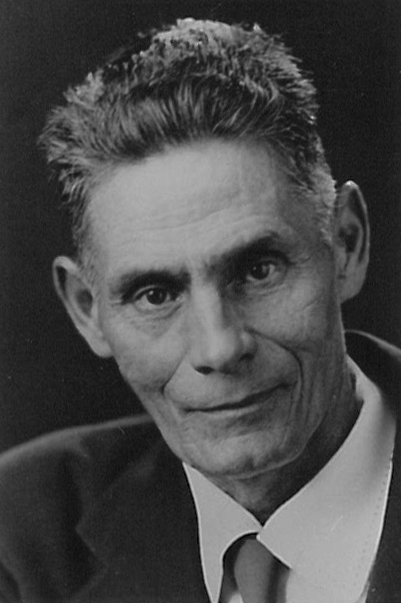 Chief Blythe, first elected in 1931, wants the parkway — and the prosperity it will bring.

But his vice chief, Fred Bauer — elected in 1935 when Blythe is re-elected — becomes his stubborn nemesis. Bauer is the son of A.G. Bauer, the distinguished Raleigh architect who designed the governor’s mansion. His mother died shortly after giving birth to him, and his father sent him west to grow up in the home of the boy’s great-uncle and -aunt, James and Josephine Blythe — Chief Jarrett Blythe’s parents. A.G. Bauer committed suicide not long after. Thus Fred Bauer and Jarrett Blythe are raised together.

Bauer graduates from Carlisle Indian School and serves in World War I, then goes on to a career teaching in Indian boarding schools in Michigan. He returns to the Qualla Boundary with his wife, Catherine, also a teacher. The two launch a spirited crusade against the parkway, which they brand a new kind of “removal,” and the Indian Reorganization Act, known as the “Indian New Deal.”

The Indian New Deal marks a turning point in the federal government’s Indian policy as administered by the Bureau of Indian Affairs (BIA). Previously, it had encouraged Indians to leave reservations for wage work in the cities and discouraged preservation of culture, language, and ritual — and the traditional crafts that supported them. The policy also favored a program of allotment — the term for parceling out tribal land to individuals.

But under John Collier, a former New York social worker appointed by President Franklin D. Roosevelt as Commissioner of Indian Affairs, all of that changes. Collier encourages tribes to incorporate exactly as the Cherokee have. This will lead them to act as collectives with considerable bargaining power, to secure financial backing for infrastructure and commercial ventures, to preserve and celebrate their cultures, and to improve the economic fortunes of their members — all the things Chief Blythe is now trying to accomplish, and all the things Bauer is bent on stopping.

Bauer sees assimilation as the only route to social and economic freedom for the Indians. For him, tribalism is just another expression of communism — and a way to keep Indians from succeeding in mainstream America, relegating them to reservations where they can be controlled. He favors the movement in Congress — gaining momentum — for termination of the federal government’s protection and oversight of Indian tribes: dissolving their special status and the subsidies they receive, and letting every individual make his own way.

Like Collier, Blythe envisions the best of both worlds for his people: economic progress through tourism carried via the parkway, and preservation of the Cherokee identity and culture through a revival of traditional crafts and ceremonies. An important bridge between the two will be a revival of an outdoor pageant performed with commendable success in 1934 and 1937: The Spirit of the Great Smokies. Yet the production founders due to the logistics of staging 350 actors and dancers — and a nasty fight for control by the Bauer faction. 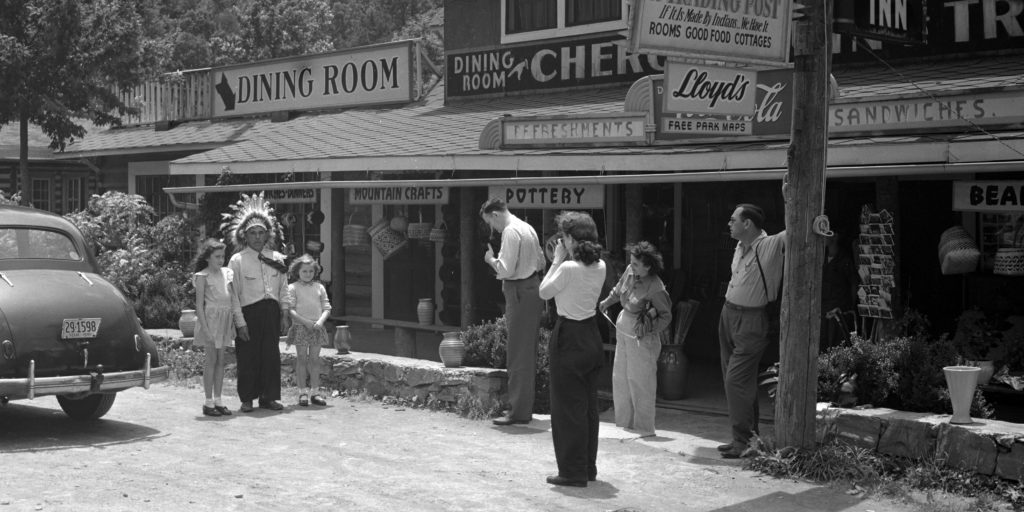 Tourists in 1945 came to Cherokee Village for an “Indian” experience, which included photos in front of the Cherokee Inn & Trading Post with a Cherokee wearing a very nontraditional headdress. photograph by NPS, Blue Ridge Parkway Archives

The rivalry comes to a head in the 1939 election for principal chief: Bauer pits himself against Blythe. But he has badly underestimated the current chief’s popularity — Blythe wins more than 80 percent of the vote. Now, in the new decade, he can truly unify the Eastern Cherokee.

Blythe quickly persuades the united council to authorize a parkway compromise: a ridge route that will bypass Soco Valley, a $40,000 federal payment for the new right-of-way, and a promise to build a commercial highway through the valley.

The next campaign is acquisition of the Boundary Tree tract — 900 acres north of Cherokee abutting the new parkway and Great Smoky Mountains National Park — and by summer 1949, the site of the Cherokees’ grand venture into tourism. It’s the first commercial enterprise that tourists encounter as they leave the park: a Standard Oil gas station, 18 tourist cabins, a lodge, and a restaurant — all belonging to the tribe.

As construction proceeds on the Boundary Tree project, 11 mountain counties band together to sponsor an outdoor pageant modeled on The Spirit of the Great Smokies, originally conceived by Harold W. Foght, the Cherokee agent for the BIA in the 1930s. He wanted to draw visitors to Cherokee and present them with a grand spectacle of history and culture — to educate as much as to impress. To stage the pageant, the counties create the Cherokee Historical Foundation, a mix of whites and Indians.

With Highway 19 completed through Soco Valley, county and state money available to fund a new theater, and a federal commitment to build an access road and a parking lot, the time is right.

To accommodate large crowds, the planners envision an outdoor theater, a raised stage surrounded by seating on level ground. Then, Samuel Selden offers a different vision. Selden is chairman of the Department of Dramatic Arts at UNC Chapel Hill. He had previously directed The Lost Colony, an outdoor drama staged annually on Roanoke Island, and is acting as technical adviser to the Cherokee production. The wooded mountainsides inspire him to suggest the idea of an amphitheater built right into the hills. Ross Caldwell, a retired architect, volunteers to design such a theater and supervises construction.

A graduate student of Selden’s at UNC, Kermit Hunter, scripts an epic story that arcs from the first Cherokee contact with Europeans in 1540 to the Trail of Tears — featuring such historical figures as Sequoyah, who created the written Cherokee language; Junaluska, a legendary chief; and Tsali, revered as a martyr for his people, who helped make it possible for them to remain in their mountain home.

Thus is born Unto These Hills — titled for the opening lines of Psalm 121, which are spoken at the beginning of the show: “I will lift up my eyes unto the hills, from whence cometh my help.”

The production is wildly successful, drawing an audience of more than 100,000 over 53 performances — paying off its debt in one season and earning a large profit.

Jarrett Blythe is re-elected five times, serving more terms than any chief in history. Under his leadership, the Eastern Cherokee have made of their mountains a great natural stage on which to present their storied heritage to all who visit the Land of Blue Smoke.

Articles
“A Brief History of the Trail of Tears” Cherokee Nation.
“Who We Are.” Cherokee Preservation Foundation.
“Outdoor Dramas.” Moore, Cecelia (with additional research by Ronnie W. Faulkner, Ron Holland, and Richard L. Zuber. NCPedia, 2006.
“‘I got to do something to keep my family up’ The CCC-Indian Division Offers a New Deal for the Eastern Band of Cherokees.” Sanders, Mattea V.
“Parkway Development and the Eastern Band of Cherokees” (three parts) Whisnant, Anne Mitchell.
“The Creation of the Great Smoky Mountain National Park From Historical Trauma to Hope and Healing” Monteith, David.