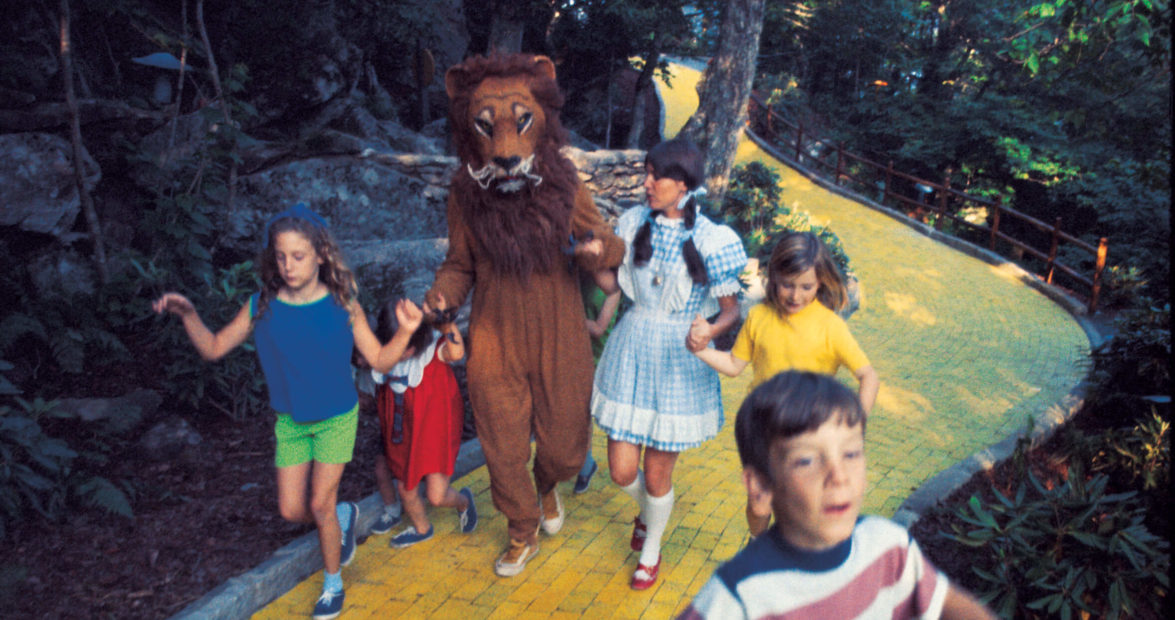 Once, at the urging of friends, Cynthia Keller entered a contest that called for tales of canine kindness. At the time, she had a rottweiler named Fritz who had befriended an orphaned deer fawn. She wrote: “Well, I’ve got a dog who likes to go down to the local ski slopes to mooch pastries, and he goes down to the general store to earn dog biscuits by parading around the little deer he’s babysitting. And when my dog and his deer come home, we often take walks down the yellow-brick road because — oh, did I mention — we live in The Land of Oz!”

Keller, a spunky woman with auburn hair and blue-green eyes, chuckles now when she remembers the letter. “I just knew I was going to win that contest,” she says. “But I never heard back from them. I thought about it and realized they probably just tossed my entry in the trash. It was a true story, but it was so true they must have thought I was insane.”

Keller’s day-to-day reality as caretaker of Beech Mountain’s Land of Oz, a nonoperating theme park that was open to the public from 1970 to 1980, is the sort of thing fiction — fantastical, unbelievable fiction — is made of. When her duties as a real estate broker for the Emerald Mountain development were first expanded to include caretaking duties at Oz, which serves as a quirky anchor for the residential neighborhood, she agreed to stay six months. That was 17 years ago.

From the forest grows a land

The distance between Keller’s office and The Land of Oz is only a mile or so, but it requires a transition into another world. As Keller drives up the road to Oz, there is a point on the ascent where standard Appalachian flora morphs into craggy forest. The crouching, gnarled trees appear to have been planted to set the tone for Oz, but the trees inspired the park, not the other way around.

The dwarfed Beech trees acted as inspiration for Jack Pentes, the designer hired by developer Grover Robbins. “When Grover brought Jack up here [in 1967], Jack told him that the trees reminded him of a movie he’d recently seen,” Keller says. The movie was, of course, the 1939 film based on L. Frank Baum’s book, The Wonderful Wizard of Oz.

Keller glances out the car window. “This is the only mountain I know of that is all indigenous Beech trees. In spring, there are tiny, white flowers that come up and cover the forest floor,” Keller says. “The first flowers of spring look kind of like the first snow of winter. It’s a lovely phenomenon.”

The forest has changed a great deal since the park first opened. When Keller came to live here, she noticed that many trees were dying. She thought it might be because of acid rain, so she invited state foresters to study the area. As she bounds up a trail into Oz, she shouts over her shoulder. “They did their studies and said, ‘No, it’s not the rain. Forests die and regenerate. That’s just the natural cycle,’” Keller says.

Similarly, The Land of Oz, a once-bustling tourist attraction left abandoned for years before Keller came along, has been reinvented under her leadership. Every year, Keller opens Oz to the public for an Autumn at Oz party. Keller played host to 300 visitors the first year. By 2009, the number of curiosity-seekers had grown to 8,500.

Keller dodges low-hanging limbs that appear as long, witches’ fingers beckoning her to wander deeper into the forest.
A black cat with jewel eyes suddenly appears out of the ether to pounce on her. “Nikko!” she greets him. “He’s named after the flying monkeys’ leader in The Wizard of Oz. He likes to get to the top of a tree and just launch.”

The cat isn’t far from the home he shares with Keller and her husband, Andy Porter. Nikko leads Keller out of the woods and into their shared yard, which is flanked by a small parking lot. Keller could have had Dorothy’s house when she came to live at Oz, but she declined, choosing instead to retrofit Uncle Henry’s barn — the former site of a petting zoo — into her personal home. “When people ask, ‘Were you raised in a barn?’ I get to say, ‘Well, actually …’.” she says.

Keller’s brick-floored living room includes a goat stall. She walks through the park’s water silo, which has been retrofitted into a bathroom, and enters The Land of Oz museum. The only thing that seems out of place is the bed in the middle of the room. That’s right: The woman who lives in a barn sleeps in a museum. Keller has a twirling Land of Oz promotional sign where most people would have a nightstand. Her walls have two wizard heads, and a life-size scarecrow hides behind her bedroom door.

It’s hard to believe that when Keller first came to live here, she’d never even seen The Wizard of Oz. “It came on every year around Halloween, and every year, I tried to watch it,” she says. “But as soon as the witch came on, click, off went the television.” In her first year at Oz, she watched the whole movie, and she ultimately made peace with the Wicked Witch of the West. This is fortunate since she now sleeps not 10 feet away from the Wicked Witch’s original striped socks, circa 1939.

Woman behind the curtain

After a quick walk through the wallpapered rooms of Dorothy’s farmhouse-turned-rental property, Keller descends into the basement. “This is the part where Auntie Em would say, ‘Get into the root cellar! There’s a storm coming!’” she says. She breezes by a large, green machine that looks like it could power a village and an antique bicycle with a Toto-size basket attached. “Let’s see if I can crank up some special effects.” A piece of heavy, black cloth hangs from the ceiling, hiding the room’s controls. As Keller disappears behind it, she says, evoking a line from the movie, “Pay no attention to the woman behind the curtain.”

Suddenly, the dank, dark basement becomes an animated, florescent world with the aid of a black light. There’s a tornado whirling from a projector, and hand-drawn images of witches appear on the walls. When Keller first visited the cellar it was covered in mold and mildew. She talked a friend into helping her mop the walls with a bleach mixture.

When Keller reaches the bottom of the staircase leading into a seemingly secret space in Dorothy’s basement, she removes the cast-iron fittings blocking the passage. “The storm is over,” she declares, as if she’s in the scene. “It’s all safe now.” Then, she reveals that behind the door is an exact replica of upstairs, only it’s rearranged as a disaster area to represent the house after a tornado.

Keller emerges from the back door and tumbles down a staircase, onto Oz’s yellow-brick road, composed of 44,000 painted bricks. She keeps moving until she reaches a tree that is implausibly growing out of a rock face. “That tree has lived in spite of its environment,” she says. “It has made it.” She hops off of the yellow-brick road and onto a grassy knoll. “And look at that little fern,” she says, “It has such a short growing season, but it uses every minute of it, sucking up the sun — life.”

She shouts the scientific names of her discoveries, enthusiasm mounting. Keller runs her hand across the surface of a boulder. “I bet there are at least 30 species of life on this rock,” she says. “Just sit here and think how many years it took that one little bit of moss to establish itself.” She points at various specimens: “This is 300 years of growth. This is probably 1,000 years of growth. And all this survived where the wind whips and the ice beats down.”

Keller’s Oz is a magical land not because of munchkins or talking lions, but because she recognizes the miraculous qualities of the natural world. Her dreamscape is the unique ecosystem of Beech Mountain, which happens to be synonymous in her mind, and in many North Carolinian’s imaginations, as The Land of Oz. She hones in on the humble, lettuce-looking lichen growing in clusters all around her. “I’ve been told it’s called tripe and that it’s edible, but I haven’t gotten that hungry yet,” she says.

Looking down at Oz

At the end of the yellow-brick road, there is a path that leads to the highest point on Beech Mountain. It’s a tiny trail, the size of a deer path, and its crest is a place Keller likes to visit when she’s had a bad day. From the top of Oz, she can see the Appalachians from above as if she were a passenger in an airplane. She gestures toward the horizon. “There’s Tennessee, and Virginia, and just look at North Carolina.” She scans the Continental Divide and the ski slopes of Sugar Mountain before pointing out her favorite spot to watch meteor showers.

Finally, she sets her sights on the homes in the valley just below the yellow-brick road, which appears, from this height, as a golden river snaking through ancient, green hills. She curves her fingers around a slightly rusted chain-link fence. A cold gust from the valley whips her hair into a tangled mess, and she fiddles with the zipper of her fleece jacket.

The entire country stretches out before her, borderless, and she opens her arms wide, as if they might expand to embrace the view.

“Oz started out being a job, but now it’s something else,” she says. “I could run away, but I guess I’m sort of like Dorothy: Whenever I get fed up with this place and leave for any amount of time, all I want to do is come back.”

And then, as if propelled by tornado-strength winds, she’s off, racing back down the yellow-brick road, traveling toward home.