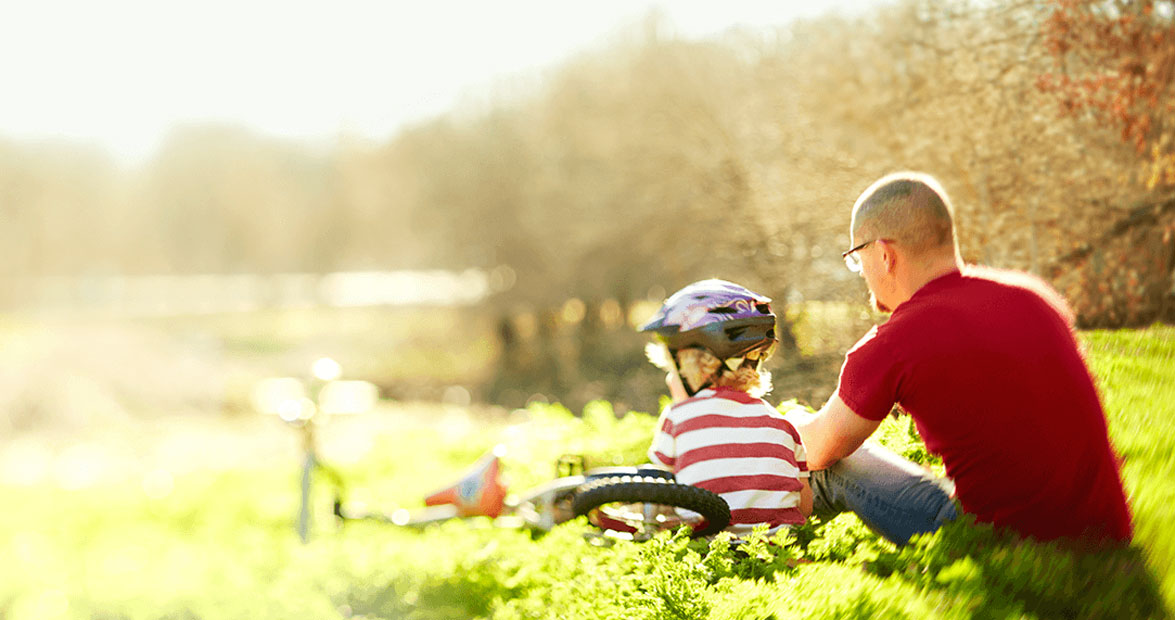 The night in question: one of those short-sleeves-to-sweatshirts Piedmont evenings, a star or two winking on, the sun dropping through the western end of the neighborhood. Those of us playing at being adults are scattered in chairs at the bottom of the backyard hill. Kids are everywhere: in the playroom, watching movies. In the kitchen, sneaking cake. In a treehouse, bashing each other with toy swords. Occasionally somebody asks the kids to swordfight a bit more gently. Then the wine comes around again.

From the top of the hill, my 4-year-old son, The Toad, hollers down, asks me something — and then here he comes. On somebody else’s balance bike — the pedal-less, pre-bicycle kind. He’s been asking for a balance bike for weeks. Months. We’ve told him no. The bike shop guy suggested against it. Said if we could get him on his own pedal bike, that’d be better. I shaved our backyard to putting-green height, stripped the training wheels off The Toad’s Huffy — at his request — and spent several afternoons doing the dad-holds-the-seat-and-runs thing, as seen on whatever joint-pain ask-your-doctor TV commercial you care to imagine. Each afternoon ended in abject parental failure. “Pedal!” you yelled, if you were me. “I am pedaling!” you yelled, if you were The Toad, lying on the ground, underneath your bike.

But where were we? Crystalline light. Neighborhood party. The Toad emerging from the dusk, balanced perfectly, barefoot, helmetless, steering right through conversations about mortgages and magnet schools. There are no brakes on a balance bike. He comes to rest against the gas grill. The gas grill is not on. No toads are harmed in the making of this scene. He’s not smiling. He’s not triumphant. You want to know what he is? Unsurprised.

He’s not surprised 10 minutes later when he does it on a bike with pedals, either. Nor that weekend, when he’s looping figure eights around an empty outdoor basketball court.

THE DEAL HAS BEEN THIS: As soon as he learns to ride, I’ll get a bicycle, too, so I can ride with him. I decide I’ll save a little money by ordering it online. The box arrives. It is about the size of an adult bike, which is fortunate, because the boys can play in that for the 14 hours it takes to put the thing together. “Take tools your first time out,” my mother says, laughing at me on the phone. When the handlebars fall off in my hand later that evening in the park, I call her back to tell her she was right.

We need a destination. A maiden voyage. We practice a little at home, then decide to head for Charlotte, for the Little Sugar Creek Greenway. A day trip. To celebrate. Somewhere safe, somewhere flat, somewhere with no cars. Perhaps a picnic. I ask The Toad what he’d like to take, and he says pickles, tomatoes, potato chips, chocolate syrup, and sandwiches. I pack most of that.

That space between what you imagine a thing might be and what it is: These days, I live almost exclusively right there. In my head, I have us biking for miles, in and out of reforested streambed, emerging to look at the glittering skyline. Tall buildings! Progress! I’ll gloss the history of urban green space. We’ll chat architecture.

In reality, we stop every 70 feet. No lie. And not because The Toad can’t ride. He’s fine. He just — how to put this? — he has the attention span of a 4-year-old. We stop to look at the creek. We stop to look at rocks in the creek. We stop to climb on things. All things. Stairs. Hills. Landscaping. Art. And who’s nearly killed? Me. One of the few times we’re both up and pedaling, I make an attempt to snap a few pictures with one hand and steer with the other. I get a pretty immediate sense of what it would be like to land in Little Sugar Creek.

We eat our lunch, we play in Freedom Park, we spend almost as much time in Charlotte as it takes to get there. The greenway is immaculate, the day perfect and warm, domed with a high blue sky. If The Toad were older, we’d bail on the whole picnic thing, spend all day, bike one end to the other, eat at any one of the restaurants along the way. Maybe places like this are a little sanitized — idealized versions of what it means to live in any one spot — but that’s the version I want for now, anyway. The Toad believes in Santa and magic and interstellar travel. Why not this, too? He points out a skyscraper, asks if the little girl from Charlotte we met at the beach last year lives there. I tell him it’s for sure either that one or the next one over.

We pass some unmarked milestone down there, of course — because there’s my kid, riding a bike, and there’s me, following him. We’re both in helmets, to save us from ourselves. The greenway stretches out in front of us. We could go forever. Or we could stop, again and again and again, to look at bugs, to look at sticks, to look at bugs on sticks. I brought him down to see the city. He’ll have little of that. He wants to show me the world.