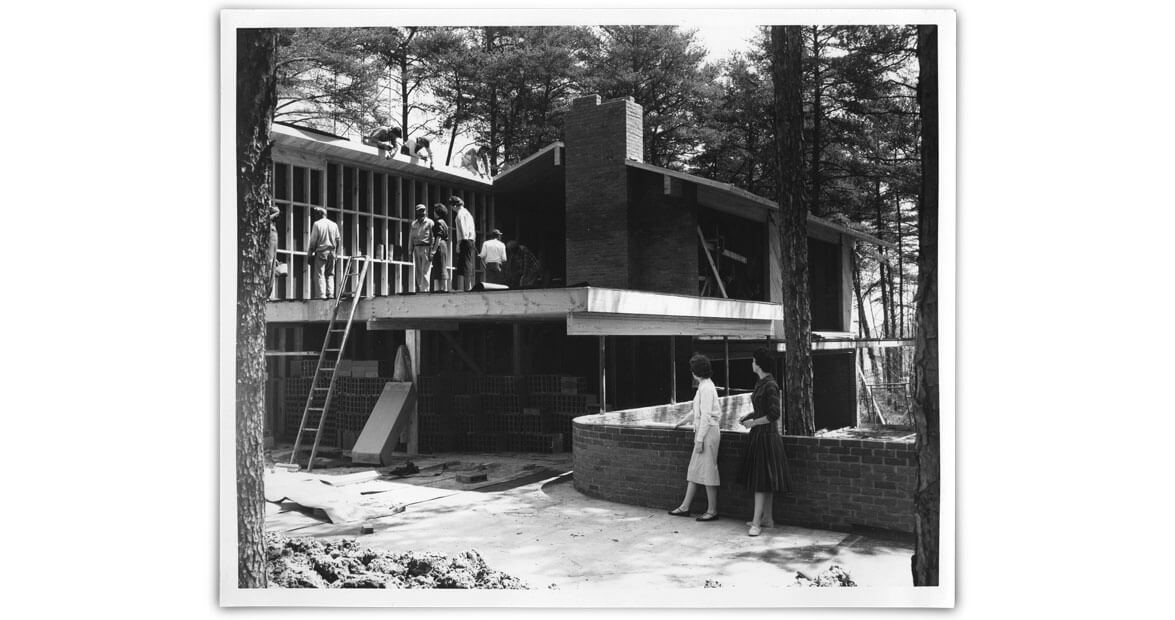 Do you know how hard it is to build a house? You have to buy land, create a blueprint, budget for materials, hire contractors, secure permits, meet building code requirements … It doesn’t sound like the sort of thing you’d take on as a class project.

In 1958, 23 women built a house. From scratch. For a grade. Ed Loewenstein, the famed modernist architect, was teaching a course at the Woman’s College (now UNC Greensboro). The class description: Give home economics and art design majors “a real working knowledge of the problems they would face in making homes.” Loewenstein brought in professionals to assist, but the design, construction oversight, and decorating were all student-run. It was, according to Loewenstein expert Patrick Lee Lucas from the University of Kentucky, “a gargantuan project for a student.”

And yet, they pulled it off. Students dealt with new technology (Dishwashers! Garbage disposals!). Some of the women supervised construction crews. Others furnished the house with little in the way of a budget. “Students can ask for a lot of things adults can’t ask for,” Lucas says, “and usually can get them.”

The groundbreaking in Greensboro’s Irving Park neighborhood attracted a lot of attention. Duke Power gave the home an award for electrical excellence. WUNC-TV broadcast the dedication. The governor’s wife cut the ribbon. The college called it the Commencement House, on account of the fact that many of the students were seniors.

The house was praised as modern, although the instructors told the students that “it should not be so radical as to make it unmarketable.” Hence, it was built to be sold for around $30,000 (roughly a quarter-million dollars today) and was made from cypress and reclaimed brick, with a carport, foyer, balcony, three bedrooms, and two baths. Soon after its completion, the Commencement House sold, and a family moved in. It was torn down in 2010 to make room for condos on Elm Street, but for decades, it stood, even after its story faded, being exactly the thing that it was built to be: a home.