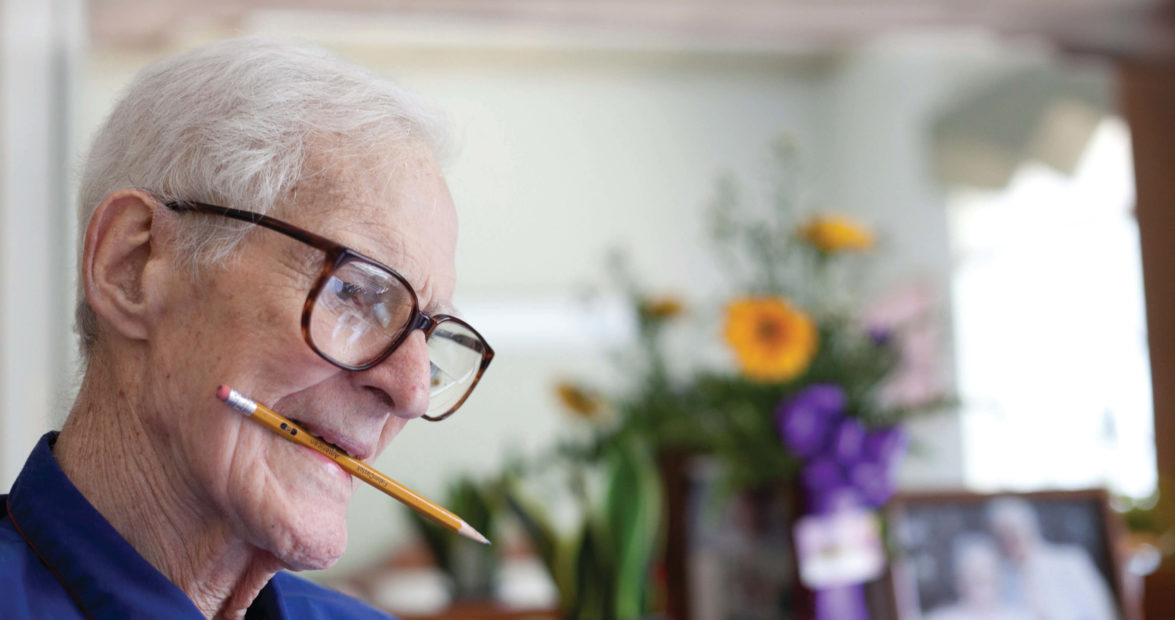 He is mostly bedridden these days, the result of many debilitating strokes over many years. But his eyes still sparkle when he talks about the mystical migratory ways of monarch butterflies and American eels; the oxygen-producing and carbon dioxide-reducing qualities of trees; and the varied defenses of venomous snakes, skunks, and porcupines. He scarcely catches his breath before moving on to medicine made from mold, the native habitat of the cork oak, and the curious fact that the great crested flycatcher usually weaves a snakeskin into its nest.

“Each animal, each plant has qualities different from each other,” says King, 91, a Randolph County author and retired newspaperman. “The artistry involved in nature. The beauty of it. Every plant you can identify by its leaf. Every one is different. I couldn’t help but be fascinated by it.”

As a lad, King prowled the parks of his hometown in Baltimore, Maryland, watching animals, collecting leaves, picking up this, and smelling that. Sometimes nature-watching led him into cemeteries; the graveyards of his youth were not perpetually clipped landscapes, but natural environments rife with flowers, bushes, and trees, alive with scampering and scuttling creatures great and small. Often, he walked two miles to the edge of town
to explore.

As a member of the Woodcraft League of America, a boys’ organization predating the Boy Scouts of America, he learned to eat like Indians, live like Indians, and respect nature like Indians. He read every nature book in the children’s section of the two libraries in Baltimore. When he headed to the adult section, a librarian sent him away, saying he was too young. King wrote to the mayor in protest; the mayor sent him a library card granting grown-up access. He also started buying books on the natural world — slim, 10-cent publications about birds, insects, and more that he could slip into his back pocket.

After serving in World War II, King settled in North Carolina with his Southern bride, Maxine Frazier. They raised three children in Franklinville. She became a librarian; he became a writer, spending 30 years with The Courier-Tribune in nearby Asheboro. After his retirement, he started writing books about people, places, and things in his adopted state — The Witch of Morganton and Other Fascinating Folks, Tar Heel Tombstones and the Tales They Tell, and seven more. He wrote several of the books using two pencils — one clamped between his teeth to help him endure the constant pain left by the strokes and one in his determined hand.

King has never written a nature book, although there is one on his to-do list. But he and Maxine did collect them. Following her retirement, he donated the collection to establish a nature library in her honor at Gail Roberson’s Morningstar Nature Refuge in Martin County.

When illness forced Roberson to close the refuge earlier this year, she returned the books. Liberty residents eagerly agreed to take the books when they heard that King was seeking a new home for the collection to honor Maxine, who died in 2003.

The Maxine F. King Book Collection in the Liberty Nature Research Library numbers more than 1,000 books. Many volumes are typical of a nature collection — birding field guides and books dedicated to popular species. But many books delve into little-known niches — liverworts found in North Carolina and the behavior of North American beewolves. Other treasures include early 20th-century titles from renowned nature writers, valuable bound volumes of nature magazines from the same era, and some of those 10-cent books King collected as a kid.

People browsing the collection encounter King’s handwritten notes, scribbled on slips of paper and tucked into books. “This is the sort of nature book that delights me most — a volume with lore and legend to give fragrance to the facts.” It’s found in Hedgemaids and Fairy Candles: The Lives and Lore of North American Wildflowers by Jack Sanders.

Another note accompanies an illustration in Lives of the Hunted by Ernest Thompson Seton: “The thought, pictured here, is Seton’s way of saying, ‘If we destroy nature, we harm ourselves.’ ”

King hopes the library helps spread awareness of the importance of every animal and every plant.

“More and more people are coming to realize the earth is not going to survive without a lot of help,” he says. “I hope the little kids going in and out there will see things in books and then go home and see things in the yard and carry it in the house and worry their mother as much as I worried mine.”