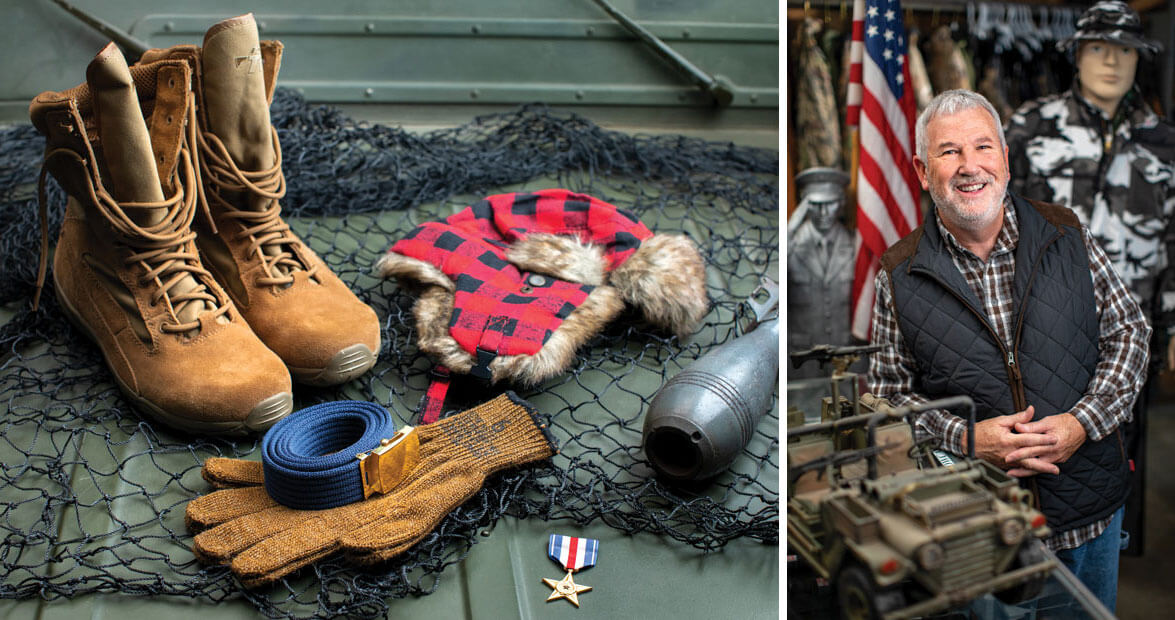 Dempsey Delk was a familiar sight at Fort Bragg, Camp Lejeune, and other military installations in and around North Carolina back in the ’70s and ’80s. He’d drive his big flatbed around to bases and fill it with mountains of military surplus gear and supplies.

Buying military surplus bundled in lots was like bidding on unexamined boxes at an auction. The top layer in a box might be lanterns. But beneath the lanterns might be “treasure” — a best-selling or hard-to-find item. But it also might be toilet seats.

“You never knew what you’d come back with,” says Frank Delk, who was still a kid when his parents ditched their welding business in 1972 to start Delk’s Army-Navy Surplus Store.

To build his store, Dempsey stacked hundreds, perhaps thousands, of wooden ammunition boxes in a 30-by-60-foot rectangle and covered them with metal siding to form the walls. In the mid-1980s, he built a new store, about three times larger, next door to the original. Within 10 years, Delk’s ran out of room again. A 16,000-square-foot structure built in 1994 is the one in use today.

In the early days, nearly everything in stock was military surplus, and the predominant color was the U.S. Army’s olive drab. Today, about half of the inventory is military surplus. And the colors? Delk’s top-selling item, the one-and-a-quarter-inch military-style web belt, is available in the traditional green, but, like most of the clothing items in the store, the belts also come in all the colors of the rainbow.

Every few weeks, buddies Mike Hardy and Scotty Brintle make the 80-minute drive to Delk’s from Mount Airy. The longtime friends share a love for camping, hiking, and the outdoors. “This is my mecca — or my Walmart,” Scotty says. “I just like to go around and stare and say, ‘Where in the world did he get that?’”

Start with N-2B hooded parkas/flight jackets, which were designed in the 1950s to protect flight crews from extreme cold. Perfect if the Piedmont ever sees temperatures dip to 60 degrees below zero.

Although what he finds here doesn’t come with a designer label, Scotty says he prefers what Delk’s sells over the outdoor gear sold in retail stores. “This would be more of a workingman’s store. Anything you see in here that’s surplus, it’s made to take the abuse for the long haul,” he says, picking up a 1970s-era military backpack called an ALICE pack (an acronym for All-purpose Lightweight Individual Carrying Equipment). “It’s a workhorse,” he says. “It’s proved its durability time and time again.”

An old jeep stands near the center of the store. Dempsey, who loved anything with a motor, parked it there for children. “I think every kid that’s ever been in here has played in it,” Frank says.

For decades, Dempsey, who died in 2012, bought surplus military vehicles to repair and resell. Frank’s older brother, William, helped their father work on the vehicles and generators. Frank, who didn’t like getting his hands dirty, worked out front.

Since William died in January, Frank hasn’t bought much of the bigger mechanical stuff, the things his father and brother could fix. Still, with his connections, Frank is confident that if a customer wants some modern-day military surplus item that Delk’s doesn’t have, he can track it down.

Just don’t ask Frank to get a tank. Delk’s doesn’t carry guns, either. But if you happen to be in the market for a Bell military helicopter, give him a call. Delk’s has one in stock.