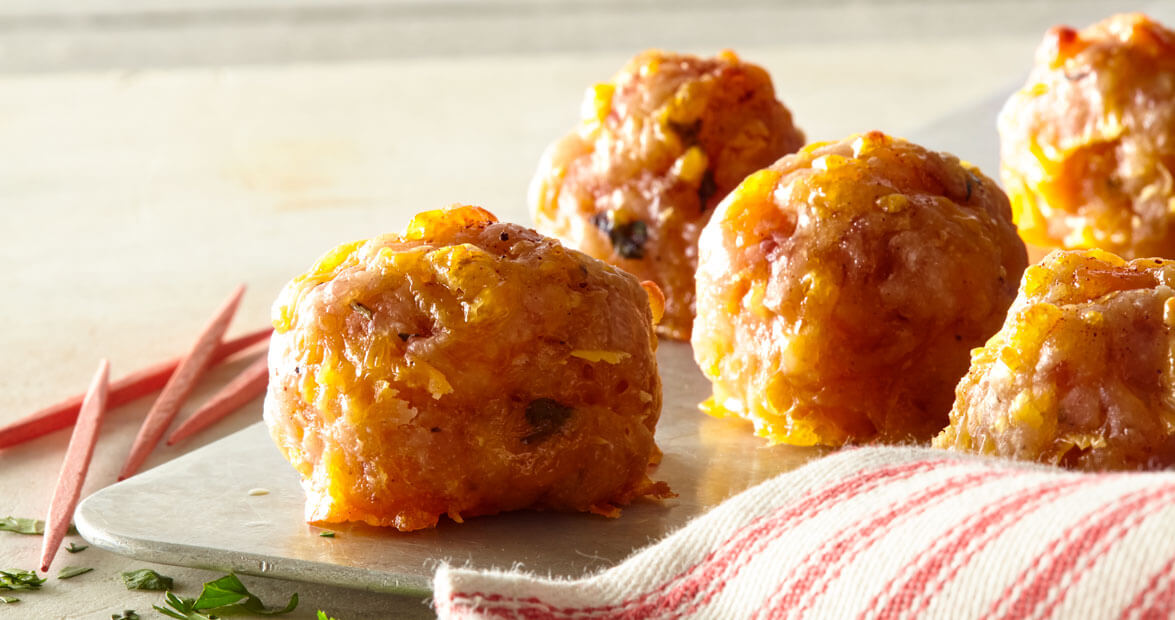 In college, my freshman roommate regularly received an overnight package from her stepmother that contained a few dozen sausage balls and a note about how best to freeze and reheat them. No matter the month, their arrival always conjured Christmas morning. She would cut open the box, then dart down to the dorm’s shared kitchen to preheat the oven, and it wasn’t long before we were enjoying a snack beloved by both of our families — mine in North Carolina, hers in Tennessee.

Sausage balls are extremely simple to make: a mere combination of country sausage, shredded cheese, and premade biscuit mix that’s baked until lightly browned. They are also extremely popular in North Carolina. As Kenneth Edwards, president of Bass Farm Sausage in Spring Hope, observes, “I don’t believe they could be more popular anywhere else. It’s impossible, really.” Especially around Christmas. The appetizer is a staple across the state in cooler months — served at parties and given as gifts. (It’s no coincidence that, in a Southern drawl, sausage balls rhymes with Santa Claus.) But what my college days revealed is also true: Sausage balls show up all over, and well beyond North Carolina and Tennessee. 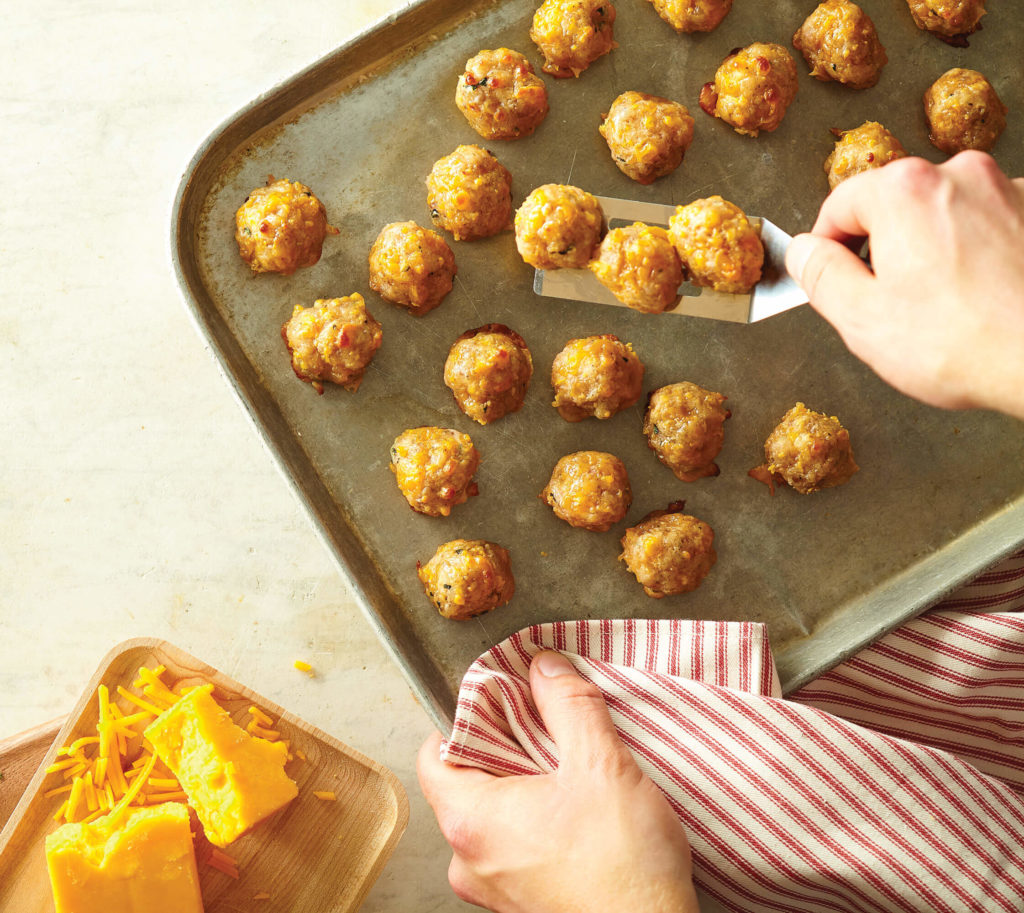 It’s no coincidence that, in a Southern drawl, sausage balls rhymes with Santa Claus. photograph by Bill Lusk Studio

A letter to the Maine Farmer and Journal of the Useful Arts reveals something of a precursor in 1835. Tired of the time and effort it took to stuff sausage into cleaned pig intestines, an anonymous cook submitted a note under the heading “Sausage Balls,” saying that they’d rolled a little of their leftover ground meat in flour and formed it into rounds. “When used I found the Balls every way as palatable and good as the meat put into skins,” this clever person wrote. The exact origin of today’s version isn’t quite clear, though a headline in a 1987 edition of the St. Louis Post-Dispatch is comically intriguing: “Source of Sausage Ball Recipe? Only Hairdresser Knows for Sure.”

Similar to the Cajun sausage mixture boudin — pork-and-rice sausage that’s sometimes rolled into small bites and fried — sausage balls were likely the invention of enterprising cooks who wanted a way to stretch their food further. As Kinston’s Vivian Howard notes in her cookbook Deep Run Roots, “Most sausage balls are made with a little cheese and a little sausage bound by a whole lot of Bisquick.” What those measurements mean is that sausage balls are inherently cheap — a pound of meat can yield up to 100 snacks — and easy to make.

Though any old flour and a bit of baking powder will do, the dish’s popularity was spurred on by the convenience of Bisquick. Some cooks even posit that the sausage ball’s origins are linked to a marketing ploy by that product, which was introduced to grocery shelves in 1931. (The brand’s archivist is unable to find such proof.) Still, none of that quite explains why sausage balls are so prevalent in North Carolina. To find out, you have to start at square one.

The starting point is more of a rectangle, really. Or, as Tommy Neese calls it, a brick. Neese is president of Neese’s Country Sausage, a Greensboro-based company that pats out one-pound blocks of pork, each one carefully wrapped in butcher’s wax paper that’s stamped with the Neese’s name and the image of a stumpy blue hog. According to Neese, this is the way his family has done business for more than a century. His great-grandfather James Theodore (“Mr. Thede”) Neese fashioned his spiced sausage into one-pound bricks for delivery by covered wagon “so it doesn’t roll out of the truck or roll off the shelf,” Neese says, laughing. 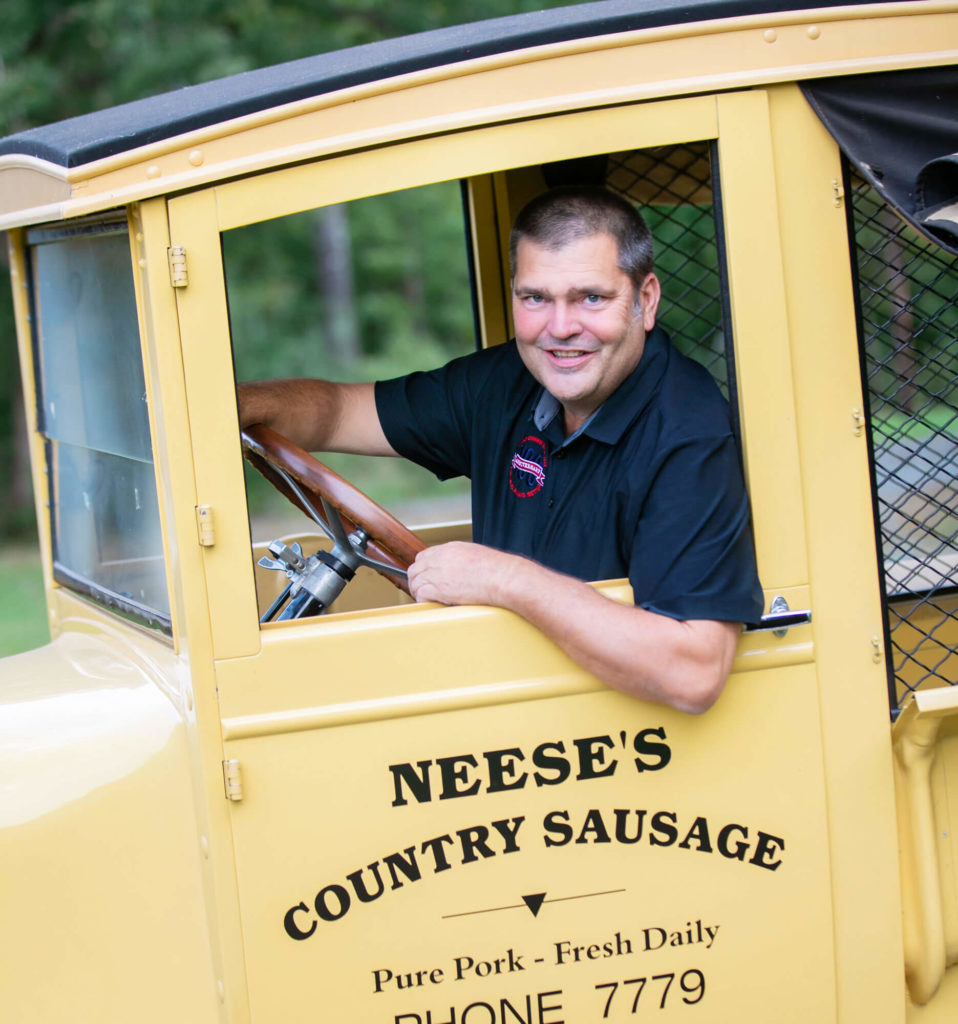 Tommy Neese is the president of Neese’s County Sausage. photograph by Sara Brennan

Neese’s sausage-making process — allowing the hog’s temperature to slowly cool down after it’s slaughtered — hearkens back to traditional hog killings that were once common on small family farms across North Carolina in colder months, when there was less worry about spoilage or insects. A hog was killed one day and made into sausage the next.

But, as Kenneth Edwards of Bass Farm Sausage explains, it’s not a process that’s possible on a grand scale. Giant pork processors don’t allow the hogs to cool naturally, so their production process is completed more rapidly. The result is soft, fresh meat that’s squeezed into tubular packaging. “People now that make a lot of volume sausage, they couldn’t put it in a package like ours,” Edwards says. Bass Farm also hand-packs their sausage into bricks wrapped in white wax paper, as does Corriher Frank C. Beef and Sausage in China Grove. “Right now in the state, there are only three of us left that make it in that form,” Neese says. “There were a lot more of us [at one time] than there are now.” 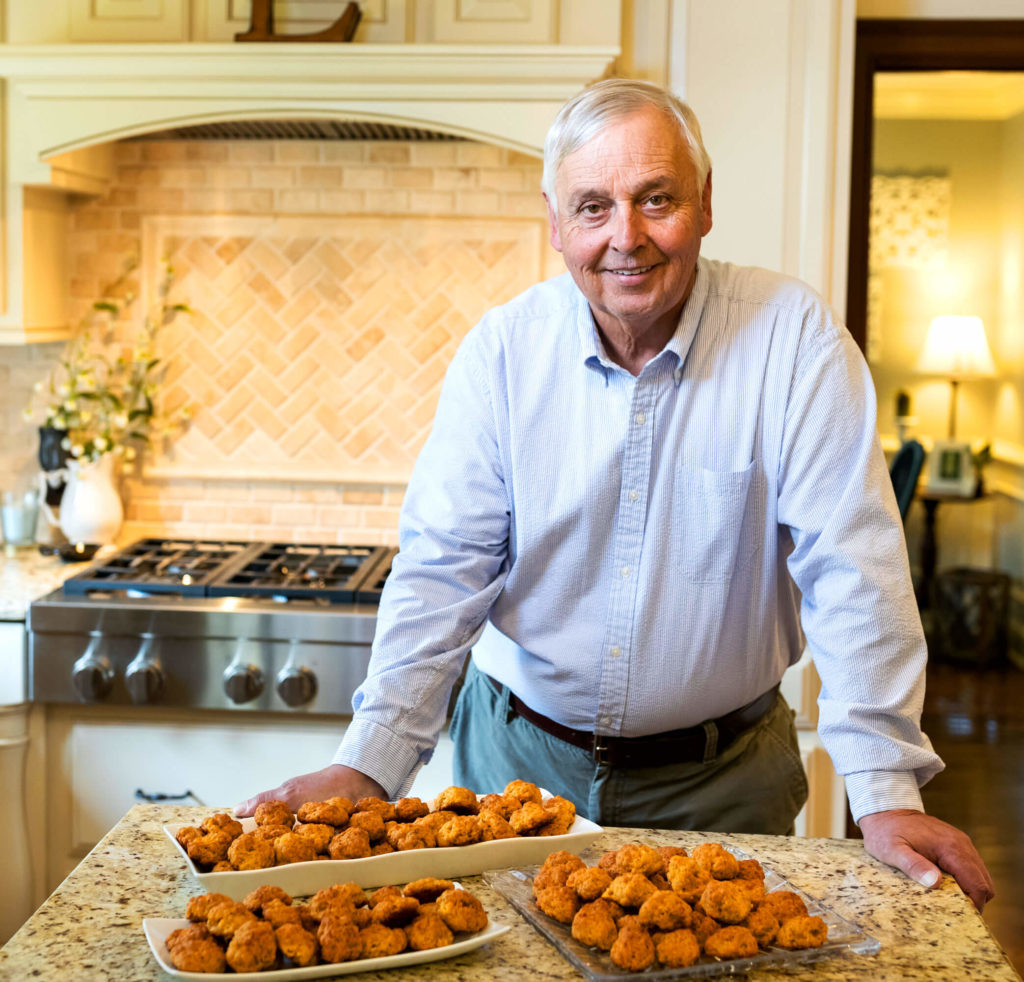 Kenneth Edwards of Bass Farm Sausage in front of a tray of sausage balls — a taste of home. photograph by Charles Harris

A family of farmers, blacksmiths, and horse traders, the Neeses were largely self-sufficient when they settled in what’s now Guilford County in 1769. They farmed what they needed, and, like many small farmers, they slaughtered the state’s abundant hogs, grinding cuts into sausage, which they flavored with a mix of sage, salt, pepper, and other spices. But in 1917, the Neeses set themselves apart from the average operation. J.T. Neese began selling the family’s blend, meeting the growing demand of North Carolinians who’d moved off the family farm to work industrial jobs, such as those in the local textile mills.

“He just decided at one time that he saw a future in this,” Neese explains. “He says, ‘Well, instead of being a trader and a barterer, I can make a living selling sausage,’ so he did that.”

As the state and the South industrialized, other families followed suit, forming companies that sold traditional foods and, just as marketable, convenience. In addition to hawking his own country sausage, for instance, founder Ralph Bass of Bass Farm Sausage (launched in 1956 as Tri-Co Packers because it served three counties) offered custom renderings. “There are a lot of hogs out in this country,” Edwards says — an understatement for the eastern part of the state. “Customers would bring them in, and we’d slaughter the hogs and make sausage for them.” But that market eventually waned, as fewer folks kept their own pigs. So the Basses turned their focus solely to their own sausage, along with chitterlings and souse.

Word spread, and folks outside of the initial three counties (Edgecombe, Wilson, and Nash) caught on, purchasing block upon block of Bass’s country sausage. For many, the country sausage tasted familiar. It was the stuff of home. As the first Tri-Co one-pound block advertised on the back: “Made Like Grandma’s.”

That’s the thing about sausage balls, too: They are a small taste of home. “You still have a lot of people in North Carolina that are from North Carolina and are familiar with our product and grew up eating it,” Neese says. Sausage balls have a firm foundation in the state, built brick by brick by our country sausage makers. Flip through a community cookbook, and the ingredient list for sausage balls often calls for sausage by name: Bass, Neese, or Corriher.

To locals around Spring Hope, though, the name is also Edwards. Anytime Kenneth Edwards is invited to a party, the president of Bass Farm Sausage is expected to have a particular dish in tow. “It’s just one of those things,” he says. “If I go anywhere, they’ll say, ‘I know you brought the sausage balls.’” Edwards’s son Brent, who serves as vice president of the company, echoes a similar sentiment. “The people that know we work here say, ‘Make sure you guys bring the sausage balls,’” he says, laughing. “Every event.”

Requests are especially common around December, a cooler month that recalls the timing of traditional hog killings and sausage making in the state — a time of exchanging gifts and food, including sausage. “It’s a big thing at Christmas,” Edwards says. “It’s just, like, unbelievable. Stores that normally sell five boxes of sausage, they sell 10 boxes.” It’s the same for the Neeses, who also see an uptick in sales around the holidays. But that’s not to say it’s the only season for sausage balls. As Neese puts it, “I’d eat them every day” — all year round.

Bring sausage and cheese to room temperature and combine in a bowl, mixing well. Add paprika and biscuit mix, adding up to 3 cups of biscuit mix for desired texture. Roll into small balls. Bake at 350° for 15 to 20 minutes.