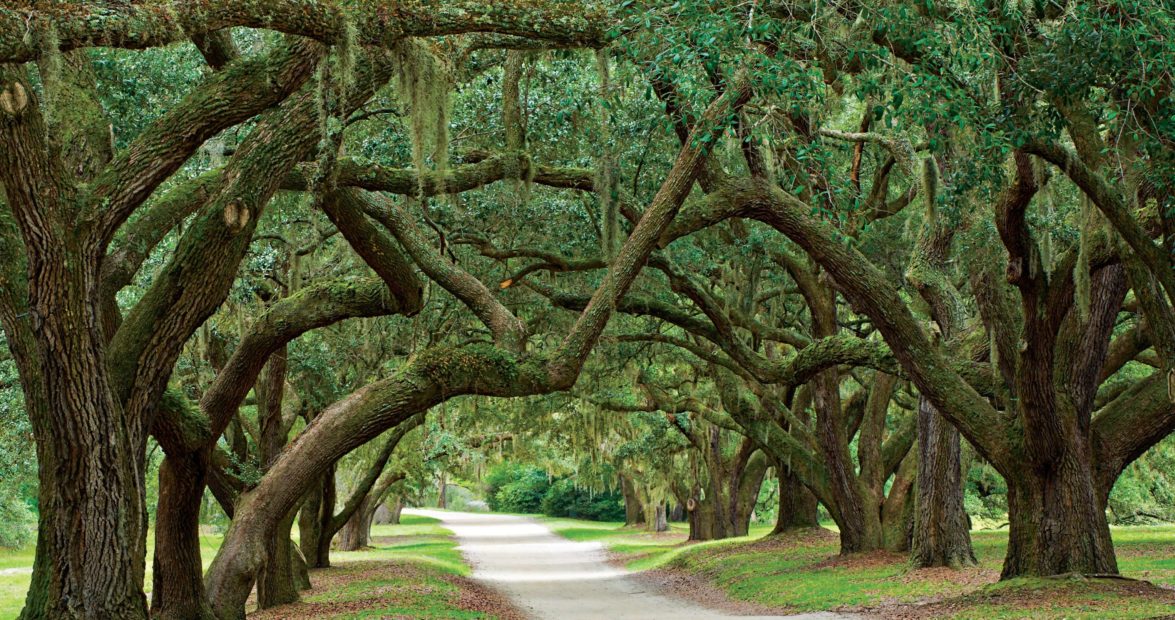 Most trees spend their lives reaching — year to year, inch by inch — toward the sky. The live oak, though, focuses its energy on growing out, not up. Fifty, maybe 60 feet is about as tall as one will get. But it can bulge to twice that in width, with a web of mighty branches creating a tree body that is a classic image of the South.

My favorite live oak grows in the maritime forest in Shackleford Banks on Cape Lookout National Seashore. It’s an enormous specimen. Its huge sprawling branches are bigger than the trunks on most of the other trees in the forest. They are chiseled arms, powerful and growing and angling, extending to the ground in some places, then popping back up. A country boy and a photographer, I still like to climb trees as much as I like to shoot pictures of them. Climbing this particular monster is simple: I just walk up the limbs.

That’s what I do with a special tree. My wife Patricia, when she finds one that really strikes her, tears up and gives it a hug. We all have our ways of expressing admiration. Hauntingly beautiful, strong as steel, and brimming with history, live oaks deserve that kind of appreciation.

Live oak — Quercus virginiana to a botanist — grows naturally in the coastal plains from southeastern Virginia to Texas. It sheds its leaves once a year and only after new leaves have formed, hence it is always “live.” The tough leathery leaves make the tree extremely resistant to salt spray, and the roots can withstand periodic saturation in salt water caused by storm surges or unusually high tides. These characteristics allow the tree to occupy the dominant position in coastal maritime forests, and makes it home for other animals and plants looking to survive in the inhospitable coastal environment. The tree’s large protective canopy provides shelter for numerous species of birds, mammals, reptiles, and amphibians. Birds, bear, deer, and squirrels eat its nutritious acorns. In some respects, live oak is an ecosystem unto itself; without it, most maritime forests would simply disappear.

They provide ideal lodging for two types of plants, Spanish moss and resurrection fern. A grand old live oak festooned with thick beards of Spanish moss is the quintessential Southern cliché, played up throughout the history of films set in the South. Resurrection fern grows on the limbs and trunks of many types of trees, but if there’s a live oak around, that’s where it sets up shop. Both Spanish moss and resurrection fern are epiphytes, meaning they use their host plant mostly for physical support and derive much of their nourishment from the atmosphere and rainfall.

Like shape, strength is a defining quality of live oak. It has a higher density than nearly every hardwood tree in North America. Air dried, the wood weighs about 55 pounds a cubic foot, making it the heaviest of all our oaks and among the hardest wood anywhere to work with tools. Those same qualities also made it superior for use in shipbuilding. Pine, cedar, and other oak species worked well for decking, outer planking, and certain other parts. But for many of the critical components, shipwrights needed wood not only of superior strength and durability, but also wood that grew naturally in different shapes. For instance, the futtocks (frames) needed a curve and knees (braces) had to have sharp angles. Workers could shape the wood to some degree, but as soon as they cut it so that the grain structure was no longer parallel to the shape of the ship part, they compromised the wood’s strength. Live oak — growing like a tomato vine with branches sprawling out in all directions — fit perfectly. A single tree might produce dozens of differently shaped pieces.

Coming to the rescue

The most revered ship in its day and the most famous American ship of all time, the U.S.S. Constitution was one of six frigates authorized in 1794 by President George Washington for national defense. Construction of the ship required cutting some 2,000 trees, many of them live oaks. “Old Ironsides” owes its nickname to the live oak tree. During the War of 1812, someone reportedly witnessed an iron shot bounce off the side of the ship and exclaimed, “Huzza. Her sides are made of iron!”

Clearly, live oak was a valuable commodity to the new nation. The problem was getting it. Hard to cut, growing in inhospitable environments, and literally weighing tons, moving live oak onto a ship and transporting it to Northern shipyards created an enormous logistical burden. The government hired crews to go “live oaking,” where they spent months, sometimes years at a time in the maritime forests of the Southern coasts. With transport ships requiring a draught of 11 feet, North Carolina’s shallow waterways prohibited large-scale operations along its coast, although some live oaking did occur in the state, particularly in the great forests of Smith (Bald Head) Island.

Live oaking was likely a major contributor to the early decimation of the old-growth maritime forests of other states, but in North Carolina, factors such as cutting wood for fuel probably played a larger role. For whatever reason, nearly all of North Carolina’s old-growth live oak disappeared by the end of the 19th century. Today, all of the live oak trees in the state grow either in developed areas or in isolated pockets of maritime forest that are presently in extreme danger. Sadly, the coastal maritime forest is among the most endangered of natural communities, facing constant threat from development, in addition to dangers from other factors such as climate
change. Large trees are common, but old trees are rare.

Fortunately, we in North Carolina still have the opportunity to wrap our arms around these splendid giants.

To have the most rewarding “live-oaking” experience, try to visit certain sites that provide a variety of lessons.

1. The dozen or so live oak stumps at Currituck Beach are remnants of a maritime forest claimed by the sea. As the island slowly migrates westward, all that remains is this “ghost forest.” You can visit Currituck Beach by going on a wild-horse-viewing trip from a local outfitter in Corolla.

2. At Roanoke Island, an interpretive nature trail at Fort Raleigh National Historic Site features several large live oak trees. A hike along the trail makes a great appetizer for an evening spent at The Lost Colony outdoor drama. The drama’s amphitheatre is carved out of a live oak forest at the entrance to the nature trail.

3. At the Orton Plantation on the Cape Fear River south of Wilmington, huge live oaks grow in the plantation’s gardens and the entrance is along a sandy lane lined with live oak trees. It’s the classic movie scene.

4. Southport has the Indian Trail Tree, which is more than 800 years old, although scientists estimate its true age at probably half that. Indians reputedly bent the tree for use as a trail marker.

5. Other towns demanding a live-oak visit include Ocracoke, Beaufort, and Wilmington. A must-see in Wilmington is Airlie Gardens and its Airlie Oak, which is officially the largest live oak in the state.