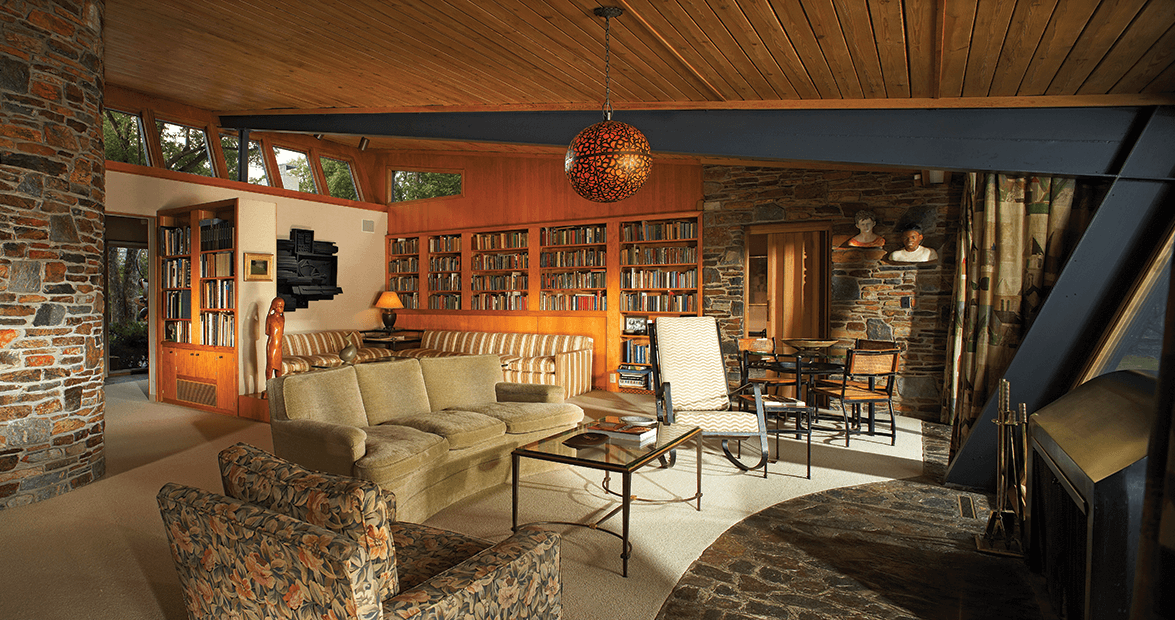 Before architect Edward Loewenstein ever put pencil to paper to design his family’s home, he took a walk.

He wandered the Granville Road property that he’d purchased near Greensboro’s Cornwallis Drive. He studied the landscape and thought about the view it would one day provide. He watched the sun move overhead and studied the light and shadows cast through the canopy of trees. He felt the ever-so-slight slope of the land beneath his feet and considered how the house would sit upon it.

He thought, too, about how his family would use this house. Where would his young daughters sleep and play? Where would he and his wife entertain? How would he separate the public spaces from the private?

And, just as important, what would people feel when they walked through the door?

The conversation between man and nature became a conversation between man and materials as the house took shape in his mind. He could capture that sunlight through walls of windows, some canted at just the right angle to allow in light while still keeping the heat of the Southern summer sun at bay. And if he centered a bank of those windows just so, a person could sit in the living room and enjoy the structural beauty of a Japanese dogwood just outside the house. Exposed steel beams would create both the spine and the soul of the house, pulling people in and their eyes upward, creating a sense of openness. The outside would come in as Carolina fieldstone turned into walls and floors.

Long and low, the house that Loewenstein built, with its alternating angled and flat roofs that resembled the gently rolling Piedmont land on which it sat, was unlike any other in Greensboro.

Edward Loewenstein arrived in Greensboro in 1945, after meeting and marrying Frances Stern, a Greensboro native and stepdaughter of textile giant Julius Cone. Born in Chicago, Loewenstein received a degree in architecture from the Massachusetts Institute of Technology (MIT) in Cambridge in 1935.

With Cone family connections and his own network of contacts in hand, Loewenstein opened a solo practice in Greensboro in 1946. As the business grew, he formed a partnership with Robert Atkinson Jr., developing Loewenstein-Atkinson Architects into a firm that would leave its mark on commercial and residential architecture in  Greensboro and around North Carolina.

The schools, shopping centers, and churches designed by Loewenstein-Atkinson Architects touched everyday life in Greensboro. When the Dudley High School basketball team took to the court in 1959, they did so in the new gymnasium designed by the firm. Bennett College students went to class in Loewenstein-designed buildings. And whenever a patron at the Greensboro Public Library checked out a book, that, too, was in a Loewenstein-Atkinson space (which today houses Elon University School of Law).

Although commercial design consumed a large part of the firm’s time and talent, Loewenstein’s passion for exploring new ways of building and design are best seen in his Modernist residential work. While at MIT, he’d been well-trained in traditional architecture, but he also discovered Modernist architecture, a style that encompassed both an end product — a building with a flat or slightly sloped roof, unusual geometry, and an open floor plan — and an approach to design and life that Loewenstein found attractive. Modernism, in both architecture and art, was a progressive way of thinking. It meant looking for new answers to old problems. It was about challenging the status quo and long-held expectations, and interpreting the world in creative ways.

Of the more than 1,600 commissions completed by Loewenstein-Atkinson Architects between 1946 and 1970, the year Loewenstein died, more than 500 were residential; of those residential properties, only about 50 were Modernist designs.

Traditional residential design, including Colonial, Georgian, Craftsman, and even ranch-style, dominated architecture in North Carolina in the 1950s and ’60s — Modernist design certainly didn’t have a big Southern following at the time — but the Modernist homes that Loewenstein did complete belonged to some of Greensboro’s most recognizable and influential families.

Loewenstein pushed Southern design barriers, and cultural and social ones, as well. Moved by a sense of social justice, he was the first white architect to hire black architects in North Carolina. And when eyebrows were raised or comments made, Loewenstein stood his ground — gently, but firmly. Those architects, including William Gupple, Willie Edward Jenkins, and Clinton Gravely, went on to have long and successful careers, carrying part of Loewenstein’s legacy with them.

In Greensboro, Loewenstein found a small Southern city not unlike many others. But he also found a progressive vein that he was able to tap into both professionally and creatively.

His interest in teaching led him to develop an unprecedented educational experiment: In the spring of 1958, a group of cardigan-clad young women from the Woman’s College at the University of North Carolina (now the University of North Carolina at Greensboro) broke ground on a house that they’d spent the fall semester designing — from the ground up.

As one of the course instructors, Loewenstein taught that class of art and home economics students as they explored a profession that was, at the time, largely open only to men. Together, they developed floor plans, researched building materials, and selected fixtures and appliances. Their designs were turned into architectural renderings by his firm, and he called on colleagues who were builders and contractors to carry out the project. The house, the first of three designed by W.C. classes, won a Duke Power Gold Medallion award for energy efficiency and was featured in McCall’s magazine.

That Loewenstein’s career influenced the architectural landscape in North Carolina is obvious. His work won numerous awards and was featured in Architectural Record, Southern Architect, and The New York Times Magazine.

But he also left a significant legacy as a mentor and teacher –– to the young architects, black and white, in his firm; to interns who watched him work; and to those students he taught at W.C. His sense of adventure inspired them, and his curiosity about the world around them sparked their own. 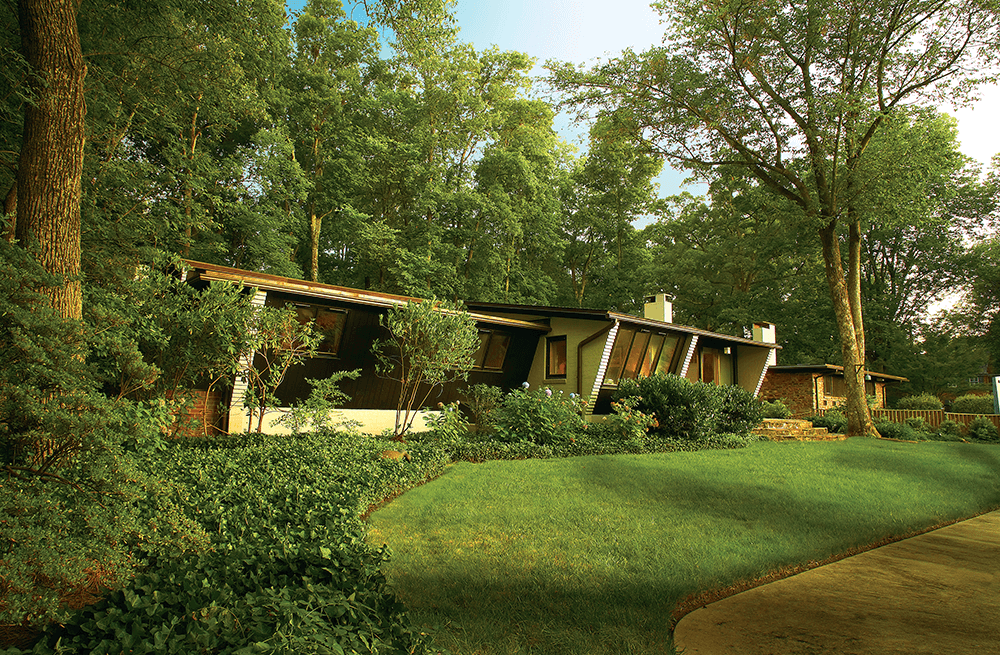 When Jane Loewenstein Levy was 13, her father took his daughters on a trip to Europe. Levy says that trip changed her life.

“My father was full of life and curious about everything,” Levy says. “There can’t have been many little girls on the block who knew what a Doric peripteral temple was, or who were encouraged to run around the stadium in Delphi in honor of Apollo.”

She remembers flying into Athens at night and seeing the lights flood across the Acropolis. The world just opened up on that trip, she says. And her father had everything to do with that.

Ed Loewenstein was, in many ways, larger than life. His 6-foot-4 frame earned him the name “Big Ed” among the neighborhood kids, whom he’d often round up for a drive around town or a boating trip to the lake. But his personality was just as big.

“He loved people,” says Levy, who lives today in the house Loewenstein built on Granville Road. She sees a lot of her father in that house.

She remembers how he would come home from work, trade his workday suit for overalls, and head to the carport to tinker with his boats. He’d incorporated steel I-beams into the carport’s design, knowing they could handle hoisting the boats he loved.

His favorite feature of the house? The living room fireplace, Levy says. Set into the bank of angled windows that create the living-room wall, the fireplace doesn’t have a traditional chimney, which would have blocked the view and obstructed light. Instead, Loewenstein attached a motor to an underground duct and pulled the smoke out to a chimney in the yard.

Although the house is a reflection of her father, Levy says, her mother had a thing or two to do with the feel of it as well.

“My parents had an agreement,” she says. “My father would design the structure, and my mother was in charge of the interior.”

Frances Loewenstein worked with New York designer Sarah Hunter Kelly to add curtains and furnishings to soften the feel of the house made of wood and glass and steel.

Levy’s parents loved to entertain, and the house provided a perfect backdrop, designed with large, open spaces and a bar near the front door. “You have to remember, this was the 1950s,” Levy says. “My parents would know your favorite drink and hand it to you the minute you walked in the house.” 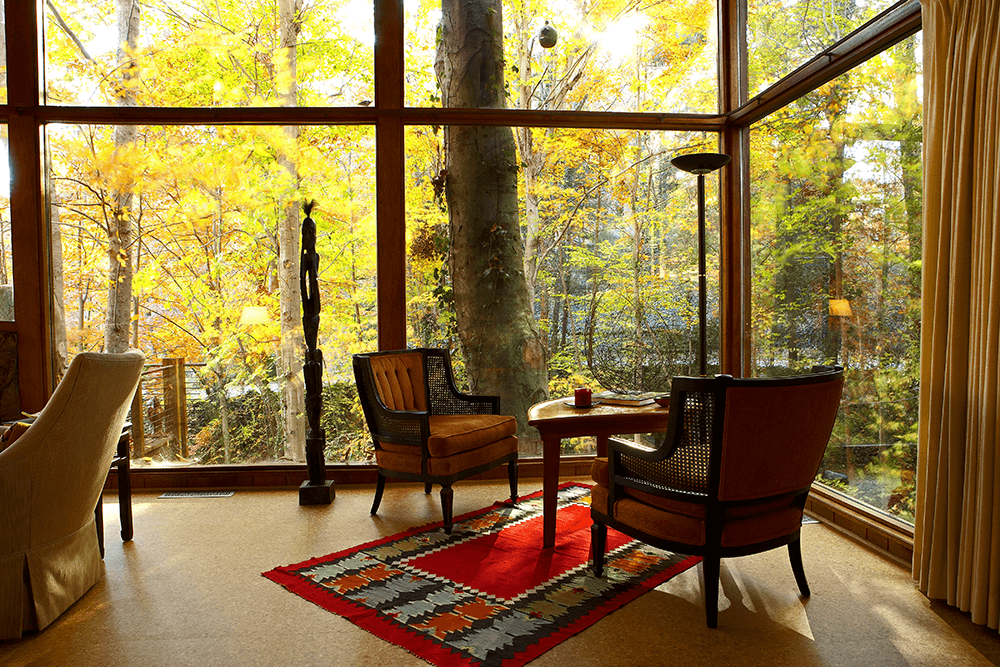 Of the house he designed, there was very little Ed Loewenstein wanted to change once it was built. “This house is just him,” Levy says.

Loewenstein died suddenly from a heart attack in 1970, when Levy was 21. Inasmuch as the house on Granville Road and his extensive body of architectural work are his legacy, so was the effect he had on others –– architects and contractors, clients he designed for, students he taught. Levy recalls her father’s funeral and the cross section of people who were there.

“I saw everyone from construction workmen in dirty overalls to leaders in the community,” she says. “That’s the kind of person he was.”

Today, the trees around Jane Loewenstein Levy’s house are larger, but there are fewer of them, thanks to a storm about 15 years ago. The Japanese dogwood that had once been a focal point through the living-room windows is also gone. The house is a bit more buffered from the neighborhood ever since Levy and her husband, Richard, purchased an adjacent wooded lot.

Perhaps the most notable change is the artwork inside and outside the house, placed as though her father designed a spot for each.

Otherwise, though, the house itself remains very much the same. The layout and structure are just as Loewenstein designed them. Levy has been intentional about keeping it that way. She hasn’t changed it to fit the neighborhood.

When her father first walked this plot of land in the late 1940s, there was little else built around it. Greensboro’s Irving Park neighborhood was just taking shape. In the six decades since, the area has grown into a collection of traditional Southern homes along stately, tree-lined streets.

Tucked around that neighborhood are a few other houses that Loewenstein designed. Those houses, like Levy’s, don’t compete with or take attention away from the houses around them. They, too, seem to provide a little poetry in their place.

“This house just does something to your spirit. It has always been a house that pulled people in,” says Levy.

Despite her love for the house her father built, Levy admits that Modernist design isn’t for everyone. It’s not always easy, she says, but it is always an adventure.

And that, too, is by design.