Hallock Cooper was too young for a real job but just the right age to begin taking on some adult responsibilities. She was 12 years old, and her parents decided it was time for her to start helping out at the Oceanana Resort, which her grandfather built in the late ’50s. From as far back as Hallock could remember, she’d spent her days tooling around in the water next to the pier, searching for seashells, riding waves. Now, she was going to work. 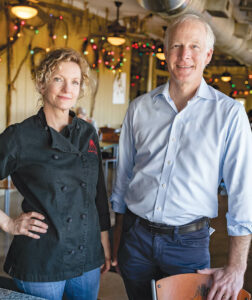 “The Oceanana was a hub for my family,” Hallock remembers now, 40 years later, a tinge of nostalgia in her voice. Sometimes life brings you full circle: These days, Hallock Cooper Howard owns Amos Mosquito’s, a casual but upscale restaurant that butts up against the marshes of Money Island Bay, directly across Fort Macon Road from her family’s old motel and pier. Now married with kids of her own, she operates the place with her husband, Sandy. His role: running the front of the house and welcoming visitors at the door as though he’s known them all his life. Hers: creating exquisite dishes like Amos’s shrimp and grits, with smoky andouille sausage, mushrooms, and green onions covered in red pepper broth over Cheddar cheese grits.

The couple is having coffee at Amos’s bar on the morning after a big dinner rush, Hallock in a black T-shirt and baseball cap turned backward, and Sandy dressed beach casual in white slacks and a polo shirt. Hallock lets out a quiet chuckle, still somewhat surprised by the success that she and Sandy have enjoyed in this little spot so close to her childhood playground. It wasn’t supposed to be this way. She was supposed to be an attorney.

As much as anybody, Hallock’s grandfather A.B. Cooper was responsible for transforming sleepy Atlantic Beach into a modern resort town. In 1946, when the area was still largely dirt roads and little cottages, he built the three-story, 70-room Ocean King Hotel on the Atlantic Beach Circle. After it burned down in 1955, Cooper, by then mayor of Atlantic Beach, built the Oceanana. “It was his love, pride, and joy,” Hallock says. Her father, Bud, eschewed local politics, instead becoming an attorney, and he insisted that Hallock go to law school, too. Her heart wasn’t in it. “But I needed to come up with something else quick,” she says, “so I said to myself, Well, you know, Mama is a great cook, and I always had fun helping her with dinner parties and stuff.” Hallock packed her bags and set off to study at The Culinary Institute of America in New York. After graduating, she traveled the world, working in restaurants from Greece to Costa Rica to Hawaii and San Francisco. 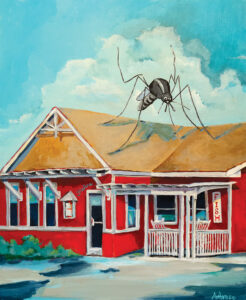 Meanwhile, back in Atlantic Beach, some friends of her parents had opened a nightclub called Memories Beach Club, and her father had an idea. “Daddy got some other friends and said, ‘Why don’t we find a restaurant, and we’ll get Hallock to come back and run it for us?’ ” When she came home that Thanksgiving, they showed her the spot on the Morehead City waterfront that would become the first location of Amos Mosquito’s.

The name was her mom’s idea. When Hallock was a little girl, she misinterpreted a joke that she’d heard an adult tell: “Knock-knock. Who’s there? Amos. Amos who? A mosquito” — only Hallock would say, “Amos Mosquito.” It was perfect.

Well, almost. About eight months after Amos Mosquito’s opened in 1999, Hallock met Sandy. The two eventually married at the Oceanana and decided to go into business together. Sandy, who’d owned a car dealership in New Bern, could handle the business — hire the staff, do the marketing and the numbers. Meanwhile, Hallock could focus on what she loved — working with the chefs on creating spectacular food, including entrées like the fresh local tuna, appetizers like the baked cheesy lobster dip served with baguette slices, and addictive desserts like Key lime pie and ice cream sandwiches. Hallock and Sandy working as a team, she says, is what made Amos Mosquito’s perfect.

Sandy and Hallock stroll from the bar into the kitchen, chatting with employees, preparing for the day. Every stainless steel surface is immaculate, every cooking utensil in its place. They move on to the dining area, where colored lights and artist Trip Park’s Ralph Steadman-esque illustrations of mosquitoes hang from the walls, and windows look out over the bay. Then on outside, to the grassy area by the water, where customers wait for their tables and little mosquito sculptures sit next to playful signs that warn, “Don’t Feed the Alligators” and “Unattended Children Receive a Free Kitten.” 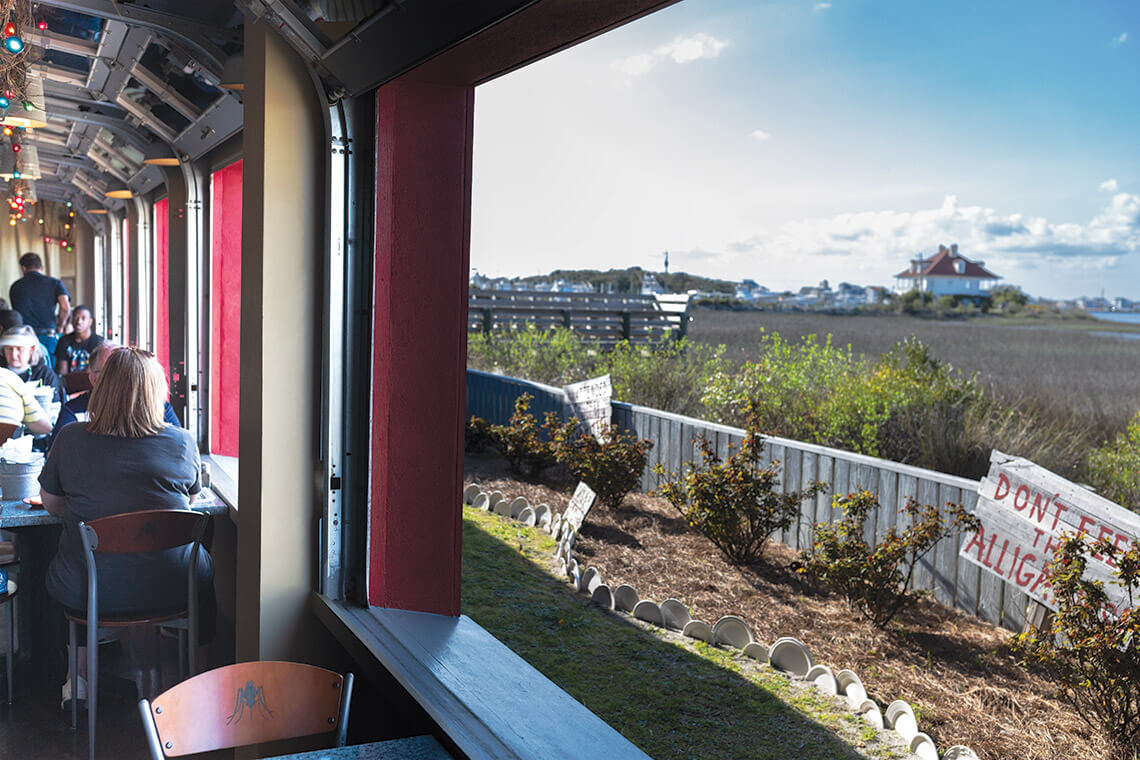 At Amos Mosquito’s, diners can look out of the garage door-style windows and read funny signs displayed in a flower bed lined with plates, and beyond to Money Island Bay. photograph by Charles Harris

Yes, little Hallock Cooper has come full circle. These days, she’s in the business of preserving an Atlantic Beach legacy: A family-friendly restaurant that balances the needs of both adults and children. In a cozy building that serves exquisite food. Right across the road from a historic family motel, built in another era by her granddaddy.