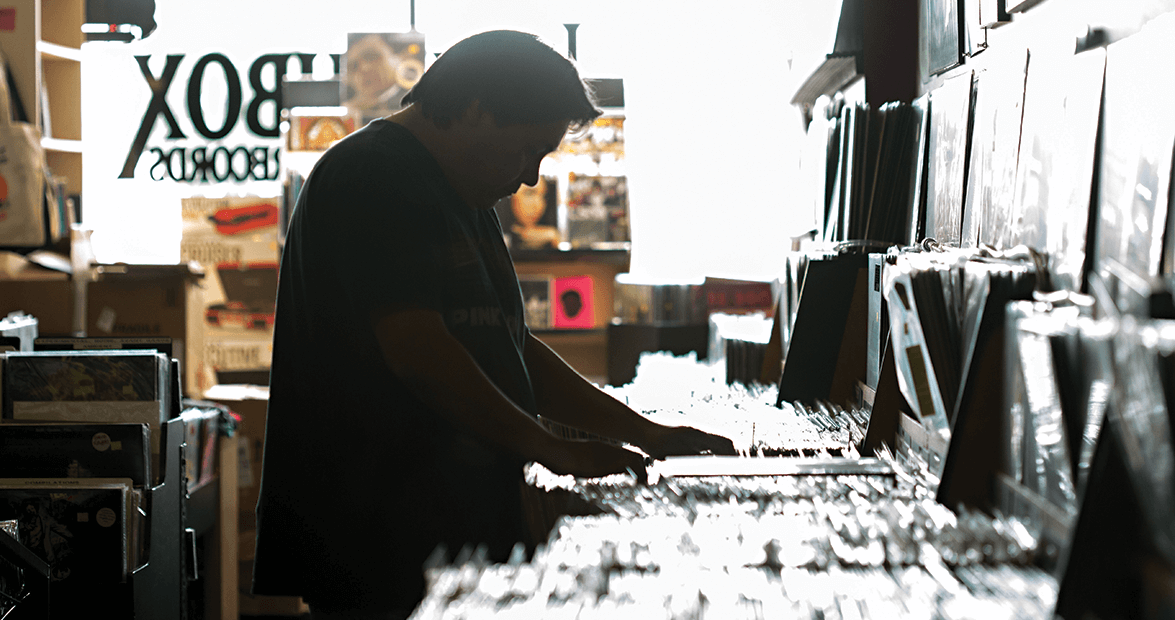 It’s dark and busy inside Lunchbox Records in Charlotte. You have to scoot past people — the whole place is the size of a one-car garage. Scott Wishart, the owner, is in back fixing his Wi-Fi. A dream-pop singer named Nite Jewel is playing on the stereo. And underneath it all, there’re the quiet shuffles and taps of customers flipping through the record bins.

A teenage girl needs an English rock band called The 1975. A guy looking through the jazz section wants sax man Boney James. A couple comes in hoping for the Boston duo called The Dresden Dolls. A few people are just browsing. There aren’t many pleasures like thumbing through the stacks at a good record store. Especially when the stacks consist of actual records.

Record albums — as in, those slabs of vinyl you play on a turntable — almost died when the compact disc showed up in the early ’80s. CD’s held more music, they were hard to scratch, and you didn’t have to flip them over. LP’s and 45’s ended up in yard sales and on the back shelves at Goodwill. You can still find them there. But vinyl has eased back into an important niche in the digital music age. According to Nielsen SoundScan — the measuring stick of the music industry — vinyl sales jumped 40 percent in the first six months of the year over the same period in 2013. Vinyl is still a small percentage of total records sold — 4 million copies out of 180 million in the first half of the year. But vinyl has become the music business’s version of small-batch bourbon or handmade jewelry. It’s a mass-produced product made into something small and special for a devoted audience.

These days, you can go into a place like Lunchbox, on Central Avenue in Charlotte, and buy new releases on vinyl by artists like The Black Keys and Lorde. You can buy gorgeous reissues by everyone from Sinatra to The Clash. Or you can search the used LP’s, where rarities by obscure emo bands live next to the million-sellers of the ’70s. You won’t offend Scott Wishart if what you really need at this point in your life is some Kenny Rogers.

“I don’t have the patience for people who just want to be cool,” he says. “Like what you like. I like what I like. And I try to have something in here for everybody.” 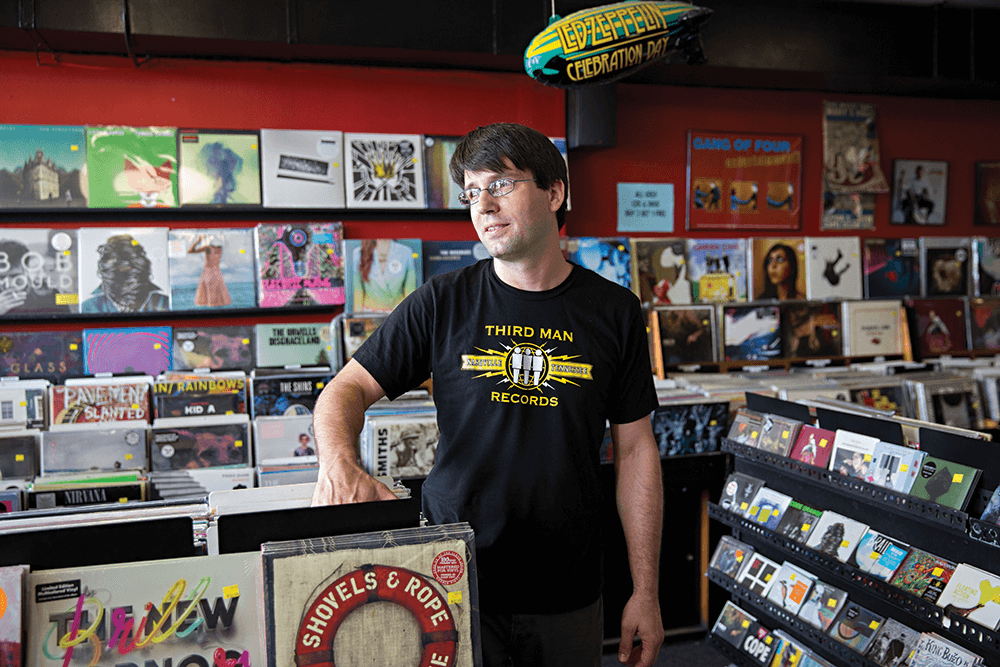 Wishart, who’s 39, opened his record store on the day after Thanksgiving 2005. He’d been working at other stores for years, including eight years with Manifest Discs, a regional chain. He and his brother had helped run Lunchbox Records as a record label in Atlanta in the ’90s, putting out mostly local punk. He had the Lunchbox logos already worked up. So he turned the name of the label into the name of his store.

From the beginning, Wishart wanted to focus on vinyl. He loves the sound of a record — not as clinical as a CD. He loves how the bigger sleeve allows for better artwork and liner notes. But he wasn’t sure he could sell enough vinyl to make a living. When he started, 75 percent of his stock was CD’s. Now, about 80 percent of his sales are vinyl. Along the way, he started selling turntables and needles and other gear his customers need.

“We can make a living and keep the store going by selling records,” he says. “So that’s the plan.”

Dolph Ramseur says somebody told him one time that people gravitate toward vinyl because the crackle of the needle in the groove sounds like a fireplace. “I don’t know what it is,” he says. “But there’s just some sort of primitive thing about it.”

Ramseur has professional ears. He manages The Avett Brothers — the Concord band that broke out nationally a few years ago. He also manages a few other artists and runs Ramseur Records, an independent label. He grew up in the country outside of Concord and had to get his mother to drive him into town on Tuesdays, when the new records came out. He still remembers picking up his copy of AC/DC’s Back in Black in the summer of 1980.

Now, he says, vinyl isn’t a big moneymaker — if his bands break even, they’re doing good. But he takes a longer view.

“They’re more like labors of love, and fans see them that way,” he says. “You get the bond between the band and the fans, and they’ll stick with you. They’re the fans who buy the tickets every time you come to town.”

Ramseur recently put together a vinyl reissue for one of his bands, an eccentric and charming pop group out of Durham called Bombadil. The $30 package for the band’s 2009 album, Tarpits and Canyonlands, features two remastered LP’s — one red, one peach — on thick 180-gram vinyl. They’re designed to be played at 45 r.p.m. instead of the normal 331/3, so each side has fewer songs and more space for sound in the grooves. The album folds out into three panels, including a pocket in the middle that contains 14 art prints — one for every song on the album.

“I’m a little bit of a nut when it comes to this stuff,” Ramseur says. “We’re not making these in bulk quantity. It’s more like a potter making a piece of pottery for somebody.” 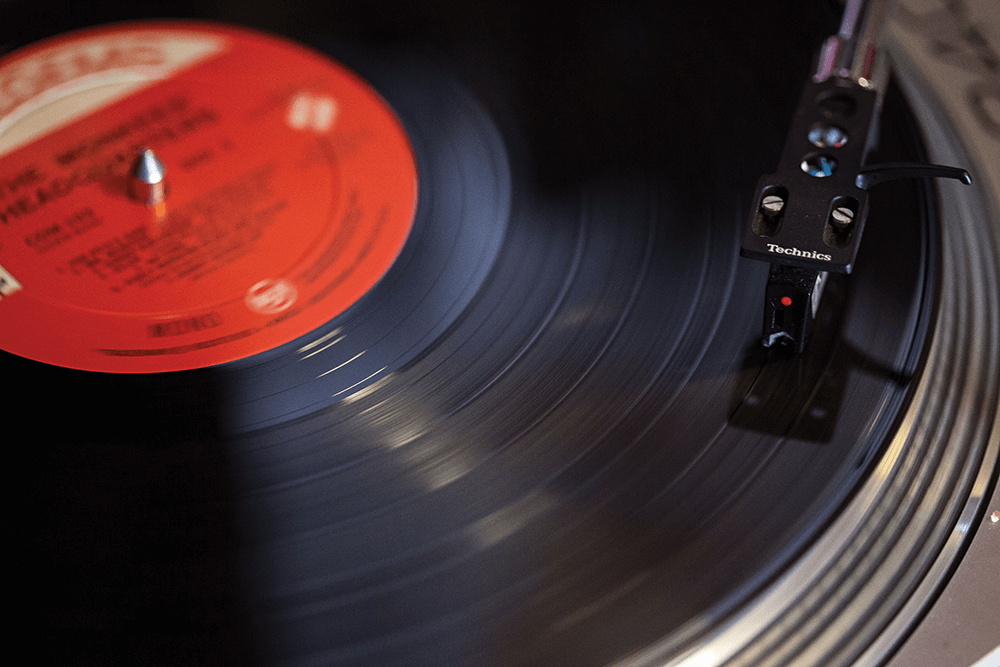 Ramseur has a place in the mountains with a high-end stereo system and a turntable made from a hunk of slate. One of his favorite records is a Nat King Cole reissue from the ’50s. He puts the vinyl on and turns it up, and he can hear the bows sliding across the violin strings, the brush of the drummer’s cymbals, every nook and crevice in Cole’s voice.

“It’s like God, Jesus, Buddha, Gandhi, whoever you want to name, were all in the studio producing it,” he says. “That’s the magic of vinyl. When I listen to vinyl, I don’t want the computer screen in front of me, I don’t want the TV on. I want to listen to the record.”

My eighth-grade English teacher, Mrs. Williams, gave me the world in a brown paper bag.

One day after class — this would have been 1977 or ’78 — she handed me the bag. Her daughter had been out of the house for years, and so Mrs. Williams was cleaning out her room. “I thought you might like some of these,” she said.

At the time, I was 13 and loved the music 13-year-olds loved back then. I was a member of the Captain & Tennille Fan Club. I knew Paul McCartney mostly as the guy from Wings. The paper bag changed all that.

Inside was a stack of classic 45’s, mostly from the ’60s — The Kinks, the Stones, The Beach Boys, the Four Tops, The Supremes. The core of it was a dozen singles from The Beatles — from “I Want to Hold Your Hand” all the way through to the miracle of “Strawberry Fields Forever” backed with “Penny Lane.” I had heard most of the songs, but I’d never really listened to them. So I stacked them on my old Sears Roebuck record player, and my whole life shifted. Over and over the needle dropped into the groove, and even on my crappy speakers, I could hear what greatness sounded like.

Not long ago, I stopped by my friend Doug’s house — he had cleaned up an old amp, bought some speakers on craigslist, and hooked it all up to a turntable. He had some of his old records and a bunch of his dad’s. I brought him a copy of Bruce Springsteen’s The River that I picked up for 10 bucks at Lunchbox. We leaned back and listened, reading the liner notes, and we were kids again, back in those days when a good record mattered about as much as anything.

A customer at Lunchbox is asking for vinyl from a New York City rapper named Pharoahe Monch. Scott Wishart is trying to tell his employee, Brett Green, where to look for it in the stacks. Green has never heard of Pharoahe Monch, and, as you might imagine with a name like Pharoahe Monch, he’s having some issues with translation. “Are those even words?” Green says.

Apparently there’s no Pharoahe Monch in the store, and Green comes back up front. He started coming to the store a couple years ago as a customer. “I just kept coming in,” he says, “until one day I just started working here.”

Wishart isn’t likely to get rich running a little record store. There are times he can imagine it, like on Record Store Day in April — when, this past year, the line was so long at Lunchbox that you had to wait 45 minutes just to get in the store. But most days, it’s like this Wednesday afternoon, a few people flipping through the vinyl, some buying, some not.

Why does music mean so much to Wishart? “I don’t know,” he says. “I’m not a psychologist.” He just knows that music makes him feel good, and it’s comforting to have lots of old records around, and it’s cool that his son at home bangs around on the same Casio keyboard Wishart banged around on when he was a boy.

You could spend hours here in this little store, listening to whatever’s on the stereo, admiring the artwork from old LP’s, looking for a song from your past. The store and the artwork and even the vinyl are just vehicles, though. The songs are the engine. The music is what moves.