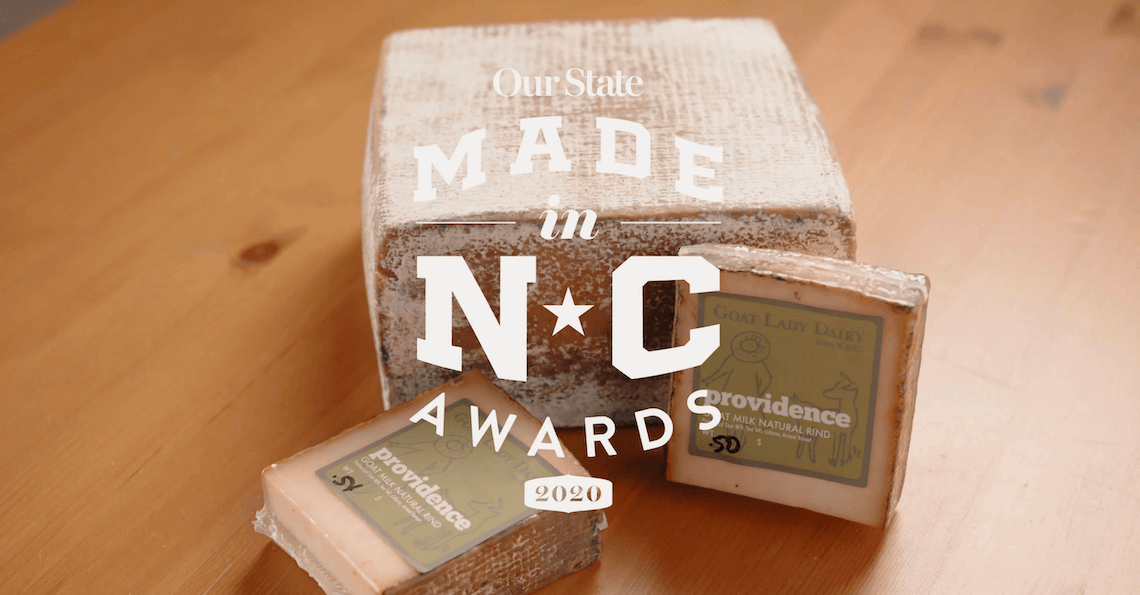 If you passed her on a quiet two-lane road in Randolph County in the ’80s, you likely did a double take: a woman driving a truck with two Nubian goats riding shotgun. As Chicago transplant Virginia Sue “Ginnie” Tate drove around looking for farmland to buy — and later, when she bought an old tobacco farm in Climax and the two goats become 20 — she earned a reputation.

Folks began calling Ginnie “the goat lady.” And in 1995, her brother Steve and his wife, Lee, moved from Illinois to help her start a full-fledged goat dairy farm, one of the first licensed in North Carolina.

Some neighbors up the road, Bobby and Carrie Bradds, along with Carrie’s father, Tommy Routh, joined the operation. They constructed a goat barn, a creamery, a kitchen, and a multipurpose dining hall built of pine, oak, poplar, and cedar harvested from the property. In 2012, they expanded the creamery so that the building was nearly 10,000 square feet and moved all the goats to a farm 25 miles east, in Snow Camp.

Ginnie Tate died in 2009 after battling ALS, or Lou Gehrig’s disease. A few years later, Steve and Lee Tate decided to retire and, in May 2017, sold the farm to their longtime employees, the Bradds.

“We love doing this,” Carrie says. “We love working with our hands, we love this area, we love our staff. We wanted a legacy that we can leave to our grandchildren one day.”

Our State sat down with Bradds to learn more about their incredible cheese and the Goat Lady’s legacy.

OS: Can you tell us a little bit more about how Goat Lady Dairy was started, and why there are such close ties between the farm and the community?

CB: When Ginnie moved here in ‘84 to work at Moses Cone Hospital, she was just a single woman from Chicago, and she knew that she had to have the community support in order to survive. It wasn’t until 10 years later that her brother, Steve, and sister-in-law, Lee, and their kids moved down here. She was alone, so whenever she had to hire people, she would go down to the local gas station and say, “I need somebody to do this.” Within a couple hours, somebody would be pulling up the drive to help her and she would hire them to work. From the very beginning, the Tates reached out to the community, and, in turn, the community was there for them. When she started this, the agriculture people told Ginnie, “You can’t do this. You can’t produce goat cheese here — nobody will buy it.” From the beginning she faced an uphill battle. But in the end, it was the community that brought us here — the community actually named the dairy, because nobody knew Ginnie’s name. They would just say, “You know, the Goat Lady.” It meant a lot to her, and it means a lot to us, too.

OS: What is your philosophy at Goat Lady Dairy?

OS: What’s the most important ingredient that you work with?

CB: Milk — you can’t make good cheese out of bad milk. It’s very important that people understand that the milk quality starts with the animal in the field. You’ve got to have healthy, happy animals to get good quality milk.

OS: How is your award-winning Providence cheese made?

CB: It’s a natural rind, 100 percent goat’s milk cheese that ages for a year. It was actually an accident — we were trying to make a different kind of cheese, but this one was really good! We’ve been making Providence for about 12 years, and we’ve tweaked the recipe over the years to be exactly what we want. It’s made with fresh milk, pasteurized, and the only thing we add to it is cultures. It’s turned and brushed every week, and we finish it off with an olive oil rub at the very end of the process — but that’s it. It’s just cheese and salt and cultures

OS: What sets your cheese apart?

CB: The main difference is our facility in general. Somebody could come and take our recipe — even take our book — and go to a different cheese room and try to replicate it. But they’re not going to be able to do it for the simple reason that our rooms are specifically designed for the correct humidity and temperature. You can’t replicate our recipes.

OS: What do you love most about what you do?

CB: We work really hard to make all of this cheese, and a lot of times when we send it out the door, you don’t see people’s reaction to it. Whenever we go to a farmers market that has our cheese and we stand there and talk to people that are eating it and see people really enjoying the finished product — whether it’s a new flavor or something we’ve been making for years — it’s really satisfying.