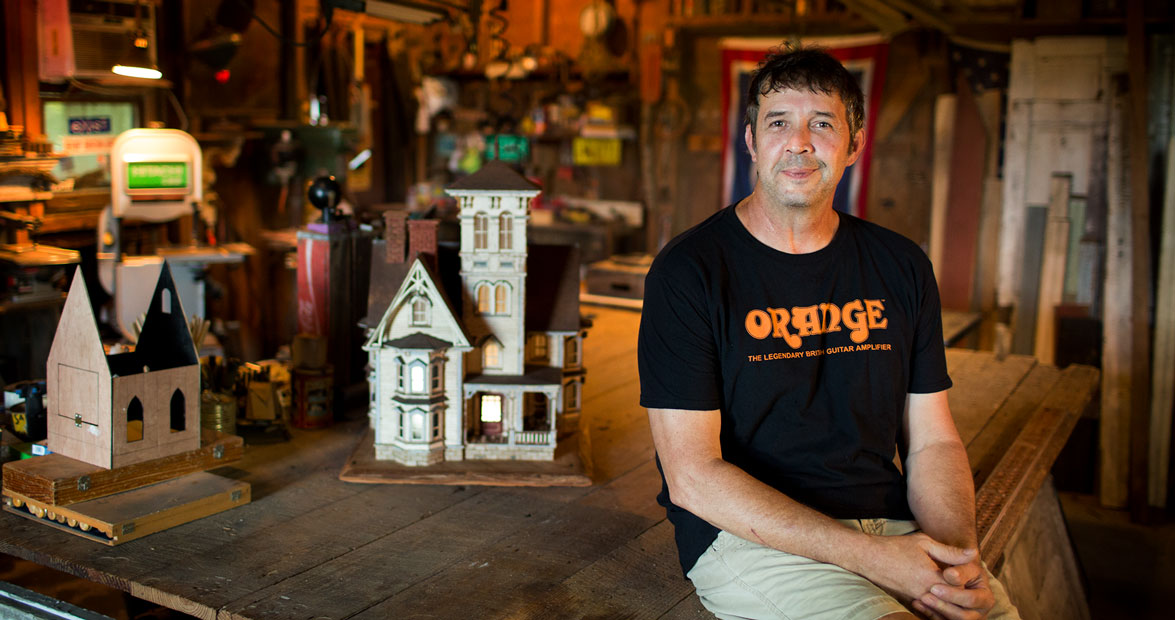 Jefferson Garvey realizes the irony of his craft. To preserve some of North Carolina’s historic structures, he has to demolish them first. Only then can he begin rebuilding them as homes for a new kind of resident.

Experience in building preservation and a decades-long passion for woodworking allow Garvey to create ornate birdhouses. Sure, birds have natural habitats to call home. But who says a warbler can’t appreciate an A-frame with stained-glass windows? Garvey built his first birdhouse in 2010, and soon after, Recycling is for the birds! took flight.

Each birdhouse is composed of salvaged farmhouse and barn materials that have been creatively repurposed. The front door from a 1920s-era home might serve as siding. Tin from an old packhouse makes for the perfect roof. The windows of Old Hickory, Garvey’s submission for the 2018 Made in NC Awards, came from the panes of a circa-1820s farmhouse.

Replication-style birdhouses such as Old Hickory — modeled on the F.W. Knox Villa in Pennsylvania — are some of the most extravagant creations that Garvey builds, and can take as long as a week to come together. Traditional birdhouse styles — his most popular offerings — can be built over a couple of hours. Then there are the “Dr. Seuss-looking” houses, with unusual roofs and other features; the Gypsy wagon homes; the churches, inspired by real ones in western North Carolina — the design possibilities are endless. For Garvey, though, functionality trumps all. No matter what it looks like, each house must be able to serve its true purpose: housing birds.

That blend of style and substance is what captured the attention of this year’s Made in NC Awards judges. From the reclaimed materials Garvey used, to the architectural styles he re-created, to his attention to detail, Old Hickory stood out from its competition.

Winning the Art category and being named the Overall winner has been “epic,” Garvey says, but the true feather in his cap is being able to promote songbird conservation and historic preservation in North Carolina. “My vision when I started was to take something really frivolous and make it have meaning,” Garvey says. “That meaning is the history that would’ve been lost to a landfill. Instead, it’s preserved through a birdhouse.”

Birdhouses can be purchased from Garvey’s studio, or online at facebook.com/recforthebirds.