Gather ’round, my pretties, and I’ll tell you a story of magic and alchemy, of lightning in a bottle, of smoke in “a cloche, or a dome, whatever you want to call it,” says woodworker and cocktail-smoker-maker Brad Taylor. I want to call it a cloche, of course. It’s fancier. If we’re going to smoke a cocktail, let’s not do it under a dome, right?

Note: The Infused Grain, All-Inclusive Cocktail Smoker is, in fact, what it sounds like. This is a delivery system, a way of infusing spirits with actual woodsmoke. It’s cocktail overlapped with campfire, the Venn diagram to end all Venn diagrams.

“So, anyway, my friend had these glass domes,” Taylor says. His easy Carolina baritone now has me suspecting that fancy’s not always the way to go. “He called me up and said, ‘Can you make me a cocktail smoker?’” Taylor’s not much of a bourbon drinker himself — more of a beer guy. But sure he could. He was already making these gorgeous live-edge cutting boards and charcuterie boards and serving platters and memento boards with recipes burned into them — exact likenesses, say, of your grandmother’s handwriting, made from a photo of her actual recipe card. But we’re getting ahead of ourselves. Taylor took on his friend’s challenge because he loves a puzzle. 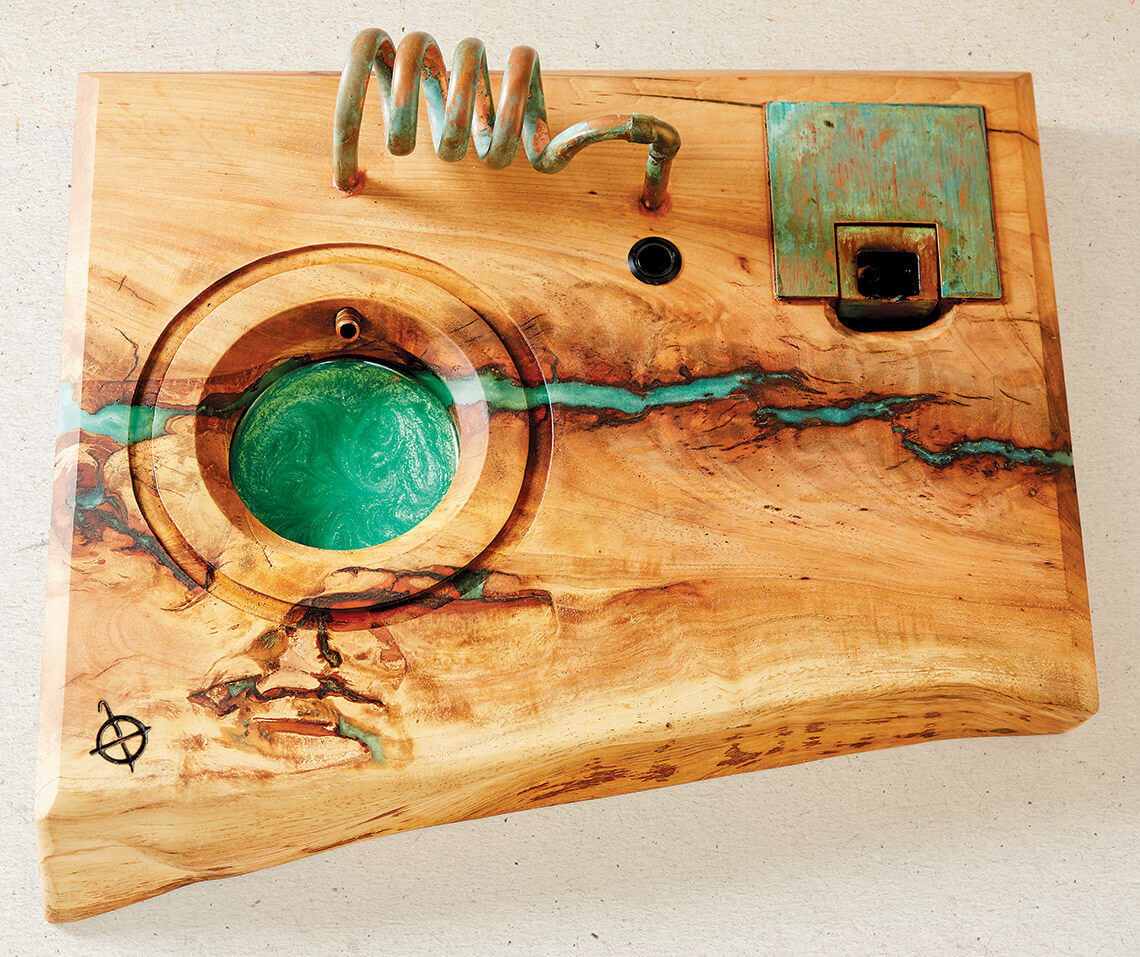 “OK,” he says. “The problem was, the cocktail glass wouldn’t fit under the dome. So we knew we’d have to recess a well into the board. Then —” Well, then there were all these other issues. The way a standard cocktail smoker works is with a dome, yes, but what you do is light a small fire of wood shavings, put the cocktail next to it, and then use the covering dome to starve the flame: smoke. The other common way is to somehow force smoke under a raised dome edge. Neither of these seemed a terribly elegant solution.

So Taylor reinvented the whole thing. When I ask him how, exactly, it works, he gets cagey — there are patents pending. These are trade secrets, after all. No worry. My basic understanding of the internal combustion engine is that into one end of the car, you put fuel, and out the other end comes “go.” Taylor’s cocktail smoker works about the same way. He loads a few wood chips into the infuser (apple? pecan? pick your … potion), presses a magic button, and lights the flame. Two seconds later, via sorcery and science and a spiraled length of copper tubing, there’s smoke under that dome.

“The thing looks a little like a still,” I say.

“Yeah,” he says, smiling. “I wanted something unique. I was thinking, ‘How could I make it be one thing?’”

Taylor has only been making them since July, and the one thing I can tell you for sure is that they’re taking off. He made at least 100 by this past Christmas, working out of the garage at his house on High Rock Lake. Now, he’s thinking of opening a shop with a storefront. “It’d be cool,” he says, “to be able to work from a place that’s mine.”

He gets some of his wood from Carolina Urban Lumber Company, which upcycles felled trees from Charlotte and the surrounding area. Each of those boards has a history, and each customer who buys one knows precisely where their tree once stood. “They have poplar from Duke Mansion,” Taylor says, and then runs a much longer list for me, a greatest hits of storm-felled trees of the Carolina Piedmont. He’s always been conservation-minded, or has been at least since he majored in fisheries and wildlife at North Carolina State University. He likes No. 2 common lumber the best, the stuff that most folks pass by, the stock filled with cracks and knots.

“Wormholes throw a lot of cool character in there,” Taylor tells me. “And the ugliest boards make the prettiest smokers. I’ve used walnut from my aunt’s property. I’ve used sycamore and black gum — a lot of people won’t use those.”

Taylor taught middle school science for 19 years. Now he teaches shop at South Rowan High School, showing kids how to take care with the raw materials in front of them. It was his dad — two dads, really, his dad and his stepdad — who taught him. “Even if it was shelves or tables,” he says, “my dad found a way to turn it into art.” His stepdad, a role model in his life, “is just an awesome guy who taught me a ton inside the shop. He made decoys, anything you can think of. Whatever you needed made out of wood, he could make it.”

When Taylor was young, he needed a cutting board. His stepdad took him out to the shop, ran a piece of white oak through a planer, and that was it: Taylor was hooked. You could make what you needed — or what somebody else needed — and you could make it beautiful. The Compass Woodworks Co. brand, burned into everything Taylor makes, is an homage to a brand his stepdad burned into everything he made.

Even if cocktails aren’t your thing, have a look at these smokers: live edges, imperfections and checks filled with various epoxies, aged copper twisting through midair. Taylor has made smokers with custom colors, and a double-smoker with two school colors for somebody whose sons went to two different colleges. (Not Carolina and Duke, alas, but then, not all of his customers hail from North Carolina.) These things shine. Even before the smoke fills the dome, they seem alive.

There’s a quote commonly attributed to Emerson that features heavily in Taylor’s life. It’s one that he prints on a card that comes with every Compass Woodworks product: “Do not go where the path may lead. Go instead where there is no path and leave a trail.” 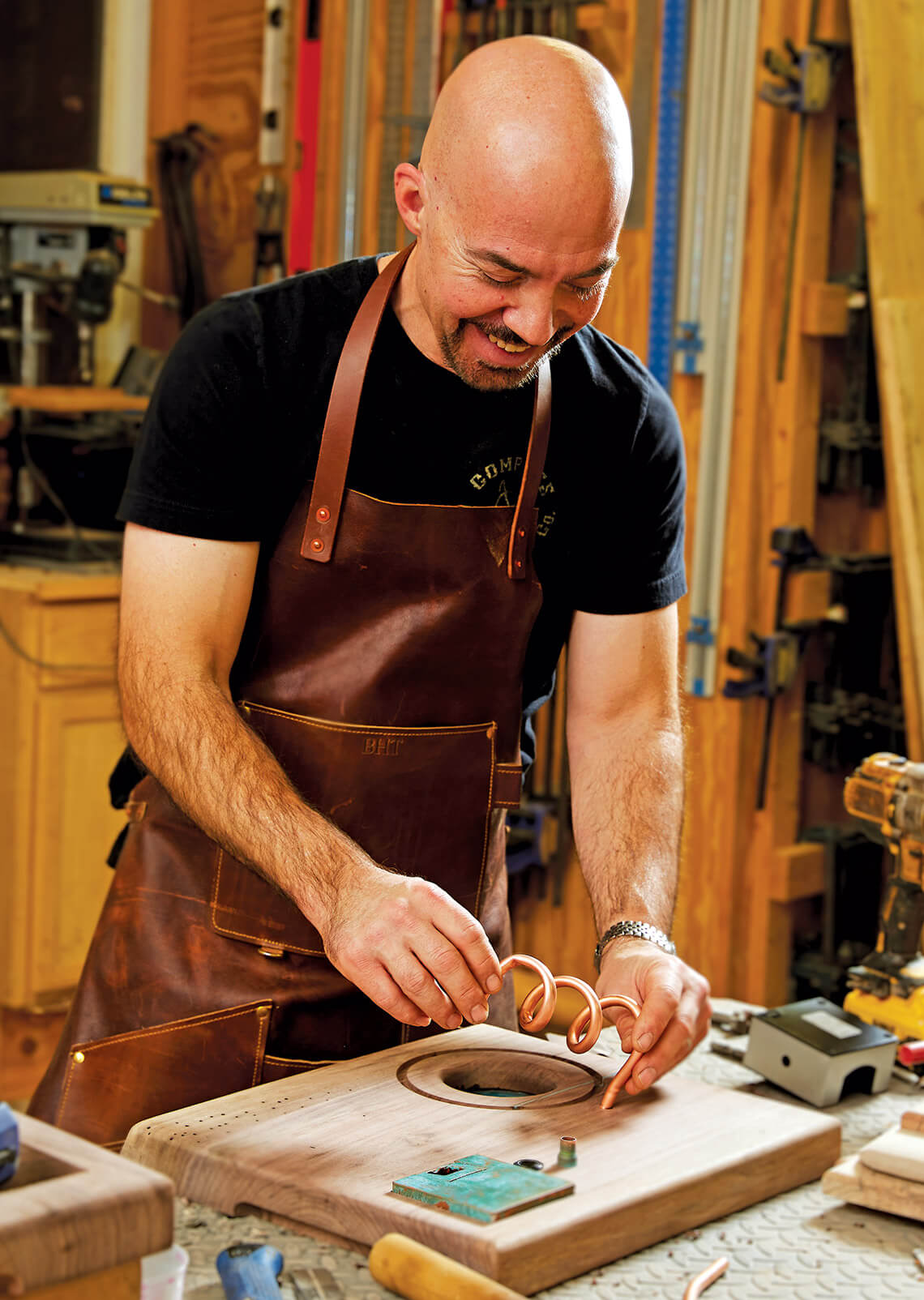 Taylor crafts each component of his cocktail smokers with care: Filling lengths of copper tubing with salt lets him bend them into perfect spirals. He estimates that his smokers are in 25 states now; he’s sent his cutting boards to all 50. photograph by Stacey Van Berkel

Let me suggest, then, one kind of trail: A kid is born in Asheville and spends most of his life around Salisbury. He majors in “outside,” for lack of a better umbrella term, at NC State. He lands jobs teaching middle school science, then high school shop. He has these two men in his life who show him how he might choose and plane a piece of lumber — and show him why he might, too. Lightning strikes a tree in Charlotte. A friend has these cloches, has a taste for woodsmoke. Taylor solves a host of riddles at once. Somebody puts a cube of ice in a glass, pours a little something over the top of that, puts it down in a well that might have somebody’s favorite colors in epoxy. Somebody says, Cheers! Somebody pushes a button, fills the dome covering a Manhattan with smoke. Somebody says, Sir, you win a prize.

“I can’t keep up,” Taylor tells me, about the number of orders coming in. But he sounds happy out there in his shop on High Rock Lake. He sounds happy, and busy, and like maybe he’s found smoke where there was fire.