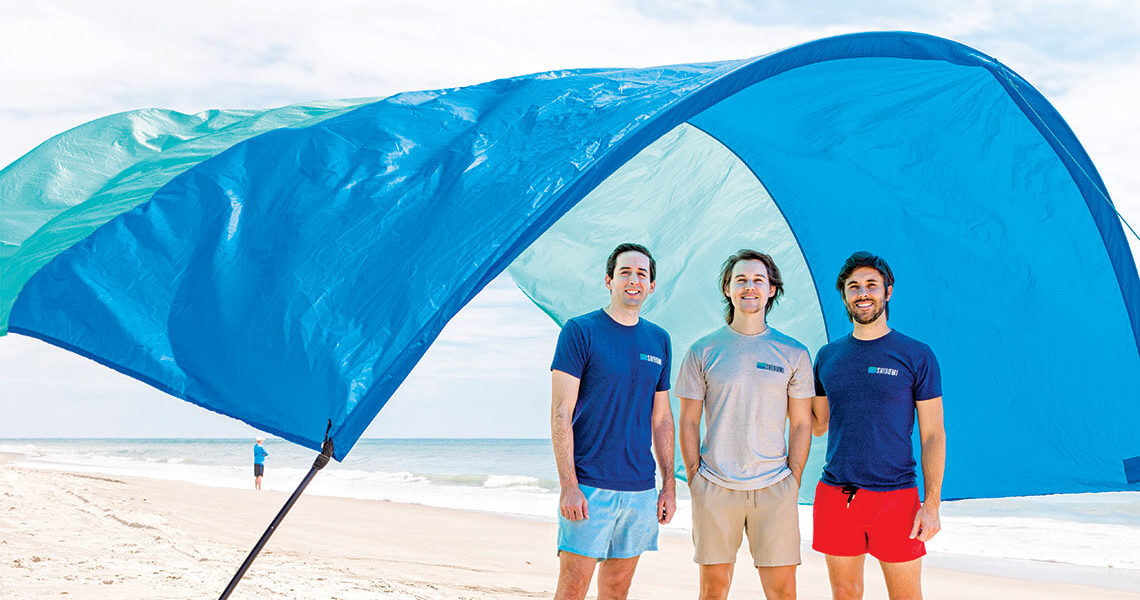 For many a summer, Dane and Scott Barnes and Alex Slater were drafted by their parents to set up unwieldy beach tents and umbrellas during family vacations to Emerald Isle, prompting the boys to begin pondering a better way. The trio eventually bought some PVC pipe, gleaned sewing tips from YouTube, and cobbled together an arch with a swath of fabric attached. They first beach-tested their contraption one windy summer night in 2015. “We turned on the flashlights on our cell phones, and the glow of that shade rippling against the sky felt electric,” Dane says. “I remember for the first time thinking, ‘Wow, this could actually work!’”

The following summer, after countless design upgrades, the three University of North Carolina alums created the Shibumi Shade, which weighs less than four pounds, sets up in three minutes, and accommodates six adults. “The name comes from a Japanese concept about the elegance of simplicity,” Alex says. “And while we were at UNC, we all had lived in an apartment complex called Shibumi.”

The distinctive blue-and-teal Shibumi Shade has since spread to more than 500 beaches across six continents. The young entrepreneurs, now in their early 30s, all quit their previous jobs to keep up with booming demand. “It’s surreal to me that every year we’ve set what we think is an audacious sales goal,” Scott says, “and every year, we have totally surpassed it.”

Now, on the first day that he visits Emerald Isle each summer, Scott pauses for a moment on the beach stairs at the crest of the dune. He glances left and right. As far as the eye can see, there are more and more Shibumi Shades, the familiar aquamarine hues billowing in the ocean breeze, and the once-crazy pipe dream of three unlikely inventors becomes real again.

For more information and to find where Shibumi Shades are sold, visit shibumishade.com.