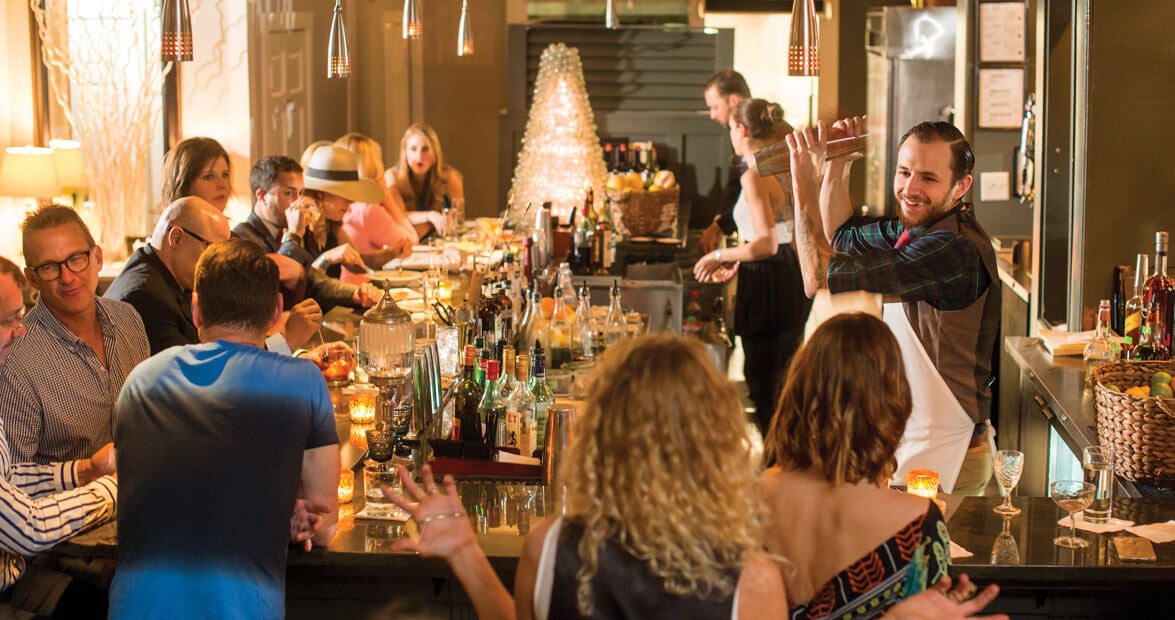 It’s easy to make fun of craft cocktails, especially if you’ve never heard of them. Do they involve decoupage? Are they served — sorry, staged — in shoebox dioramas? Fired in a kiln? Do you need a glue gun to make one?

The answer to all of the above is: Maybe. And also: Is that a problem for you?

If you don’t live in a metropolis or haven’t haunted the high-end bar scene lately, you might, like myself, have missed the advent of the craft cocktail craze, ongoing for the past 10 years or so, though the origins of the craft cocktail itself can be traced back through James Bond’s invention of the Vesper Martini in 1953, to the 19th-century apothecarial tradition of preparing medicinal herbs and bitters, and further still, to the shipboard barrel-aging techniques employed by explorers in the Middle Ages, and maybe even all the way back to the kykeon, a cocktail of wine, honey, onion, goat cheese, and barley described by Homer in The Iliad.

Reading the above, you might understandably feel a bit intimidated, somewhat skeptical, a little irreverent about the whole concept of the craft cocktail. Do we really need a drink requiring 10 different handmade, fresh-squeezed, locally sourced, small-batched, and/or hopelessly obscure ingredients, which when assembled may take 15 minutes to prepare? And come on, customized extra-large ice cubes — really? What can the artisan-designed Elderflower Fizz (gin, St. Germain elderflower liqueur, grapefruit juice, lemon, soda, and hand-crafted grapefruit bitters) do for us that an old-school Gilbey’s and tonic can’t? (Also, isn’t the word “artisan” pretty much meaningless, now that it’s been co-opted by Domino’s, Doritos, and Starbucks?)

One recent evening at the craft-cocktail bar at manna (lower-case “m” intentional, explanation below), in downtown Wilmington, two irreverent, skeptical friends and I conducted our own investigation of the trend. The ever-evolving cocktail menu at manna is something of a synecdoche, a tiny sampling of what might be created for you on any given visit; special off-menu requests and vague cravings are honored, encouraged, even revered. “Bartender’s Choice” is also a reassuring option, described variously on different menu iterations as “Give us some guidance and let us take care of the rest,” “See where the night takes you,” and simply “Trust us.” Really, the first thing you feel in this place is care. The sparkly high-end atmosphere, all lights and mirrors and marble, is pleasantly complicated by the rows of small, dark, unmarked, and slightly witchy-looking bottles lined up within bartenders’ reach — handmade bitters, syrups, who knows what else. You’re at a fancy bar, but you’re also in some benevolent mad scientist’s private kitchen, a bewitching juxtaposition.

The second thing you feel at manna is irony, a sort of free-floating good humor, maybe wafting invisibly from those mysterious little bottles. The menu drinks are amusingly, cutely named — the Mannahattan Project, the Carthusian Julep, the Corpse Reviver, the Fishtown Getdown — yet their credentials as liquid works of culinary art are evident in the long lists of rare and exquisite ingredients, and the initials, beneath each offering, of its creator. Still, one senses manna wants you to laugh more than it wants to impress you. Craft cocktails are a secret club, and manna, with nerdy excitement, wants you to join.

My friends and I chose as our methods of initiation the above-referenced Elderflower Fizz; the Wolf of Princess Street (Redemption rye, Cocchi Vermouth di Torino, homemade juniper syrup, lime, lemon, orange, cinnamon, and egg white); and a Gin Gin Mule (gin, mint, Angostura bitters, lime, ginger beer, and sugar). All three were prepared for us by Joel Finsel, manna’s barman emeritus. Named by Playboy.com in 2009 as one of the top 10 bartenders in the nation, Finsel wrote the book — well, a book — on bartending: Cocktails & Conversations, a meditative mix of recipes and stories collected during his years working at the Astral Plane in Philadelphia. Having played a critical role in bringing manna’s craft-cocktail bar into existence, Finsel has since turned over the reins to his 20-something colleague Ian Murray, an up-and-coming live-wire cocktail-geek rock star. (Finsel has launched his own new catering business, Astral Craft Cocktails.) Given Finsel’s credentials, one might expect Tom Cruise theatricality, but he prepared our drinks with the quiet precision, expertise, and grace of a master sushi chef, serving the art rather than showing off. The results were layered, fortifying, and beguiling.

For about two seconds after tasting our drinks, my friends and I attempted snooty cerebral food-critic commentary — “This tastes like Christmas, like tiramisu” (the Wolf of Princess Street), “This is spicy and complicated” (the Gin Gin Mule) — before we devolved happily into “Yum,” “Wow,” “I can taste that one all over my tongue,” and “This could be a food.” Given manna’s AAA Four-Diamond rating — the first restaurant in Wilmington ever to earn this honor — there is a divine balancing act going on here between epicurean perfectionism and laugh-at-yourself humility, culinary rigor and a sort of Taoist openness to chaos and improvisation and flow. 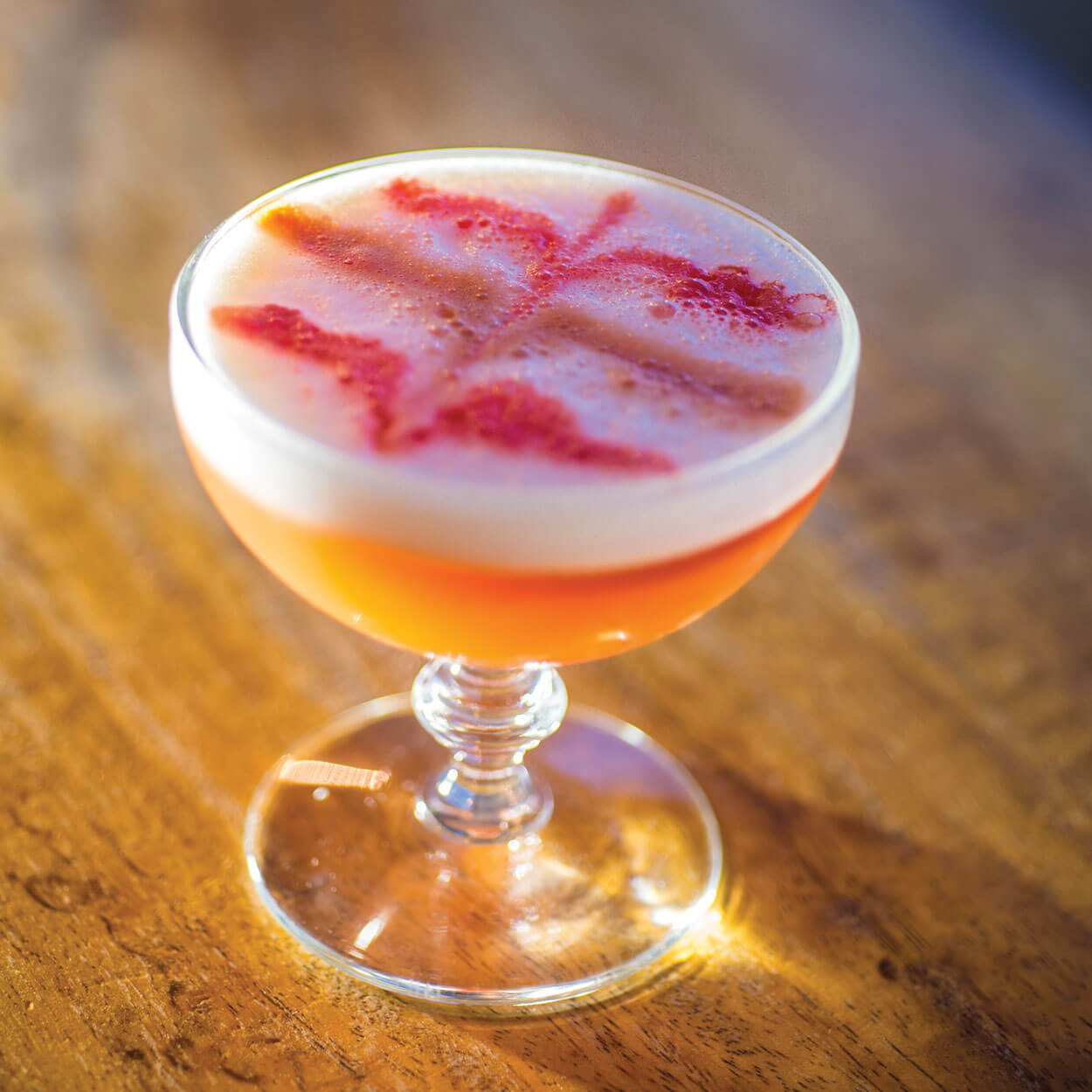 “Leave your pretension at the door,” says owner-proprietor William Mellon — “Billy” to friends and fans — who opened manna in 2010, intending the lower-case “m” in the restaurant’s title to evoke the manna of Exodus: “the unadulterated offerings of everything that falls from heaven. It’s all here, everything you need to survive,” he says. Mellon hoped to invigorate Wilmington’s sleepy bar scene with an infusion of complicated, sophisticated cocktail creations — Joel’s and Ian’s “genius collaborations and lab experiments,” he calls them — but “we’re also taking the shine out of ourselves. We want people to have an experience, to have fun with it. Our dress code is: You have to be wearing clothes.”

I felt lucky to witness the yin-yang team of Finsel and Murray on a weekend evening, when manna’s barmen generally prepare about a hundred specialty cocktails for the 50-seat restaurant. This is the time to pay a visit, if you really want to see the magic. Elegant and ever-unflustered, Finsel explained the history of the Sazerac and discussed the medicinal qualities of the milk thistle and quassia he uses in his custom-designed bitters, while the younger and unapologetically maniacal Murray — creator of a seven-ingredient drink called Blood of an Englishman — proudly showed me the colorful package of organic Mamajuana (“Aphrodisiac Roots & Spices”) that a friend had just brought back from the Dominican Republic. (Murray hasn’t decided yet how he’s going to use it; package instructions say: “Enjoy it with a nice companion!”)

“Ian is Darth Vader,” Mellon says, then qualifies: “Young Darth Vader, and Joel is Yoda. He keeps Ian from going over to the dark side.” I think about varieties of humility, how it can be both quiet and loud, the self stepping out of the spotlight, or the self simply ignoring the spotlight, declaring, “Who cares, take me as I am.”

Flannery O’Connor once wrote that if her mother got a dog she would name it Spot, without irony, whereas if Flannery herself got a dog, she would name it Spot with irony — though “for all practical purposes nobody would know the difference.” This came to mind as I finished my sparkly peach-colored Elderflower Fizz, at once light and filling, nuanced and elementally simple. “This got different at the end,” my friend Ryan said of her Gin Gin Mule, with a sense of cheerful wonder. We all nodded even though we had no idea what she meant. Who cared whether the drinks were ironic or not: They were good.