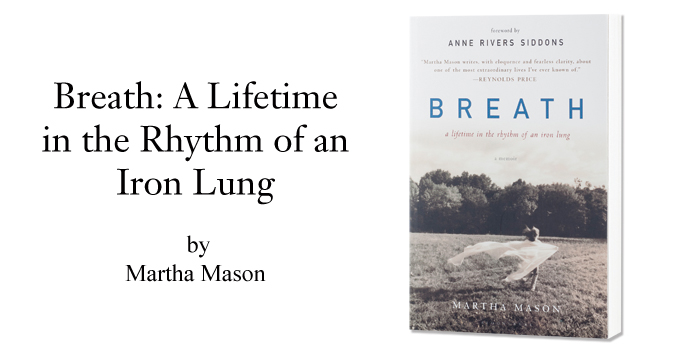 Two years after her death, Martha Mason remains alive in the memories of her friends in Lattimore and all who knew her. “She was the moral center of the town,” says Charles Cornwell, an old friend of Mason’s and a freelance editor who encouraged her to write her memoir, Breath. Cornwell helped edit the book. “People were always on hand when she needed them. There was a constant flow of people in and out of her house.”

Many visitors were shocked by the sight of the 7-foot-long, 800-pound, yellow tube and the whoosh-whoosh sound of the iron lung’s electrically generated bellows breathing for Mason. She lived in the iron lung for 61 of her 71 years.

But people soon forgot about the intrusive machinery, Cornwell says. “Martha was such a presence herself; you just didn’t notice the sound and sight of the machine.”

Mason’s social nature attracted a steady stream of townspeople of all ages and backgrounds. They brought the town to her, sharing news of family milestones, local politics, and sports updates from Wake Forest University, Mason’s alma mater where she graduated first in her class.

People didn’t visit because they pitied her — they came because she was a wonderful conversationalist and caring listener, says Mary Dalton, associate professor of communication at Wake Forest University, a friend of Mason’s, and producer of the documentary Martha in Lattimore. The film captures the easy social interactions between townspeople and their friend.

Mason held dinner parties and organized book-discussion groups, all at her modest home. Despite being encased in the metal tube, immobile except for her head, Mason was a genuine companion.

The ease of small-town life gave Mason the support she needed, but her own intellect and curiosity helped her explore the greater world. Once she mastered her voice-activated computer, she reveled in the Internet, reading online versions of national newspapers and watching movies. “She was extraordinary,” Dalton says. “Her intellect helped her to live the life of the mind.”

Lattimore residents are raising money for a museum that will preserve memories of Mason through artifacts such as her iron lung, says Polly Fite, another longtime friend. “Martha had such a big spirit and always kept everyone upbeat. We want to keep that spirit alive.”

For a brochure about the proposed museum, write to the Lattimore Historical Society, P.O. Box 126, Lattimore, N.C. 28089. To see the documentary, Martha in Lattimore, visit wfu.edu/documentary/news/martha/.