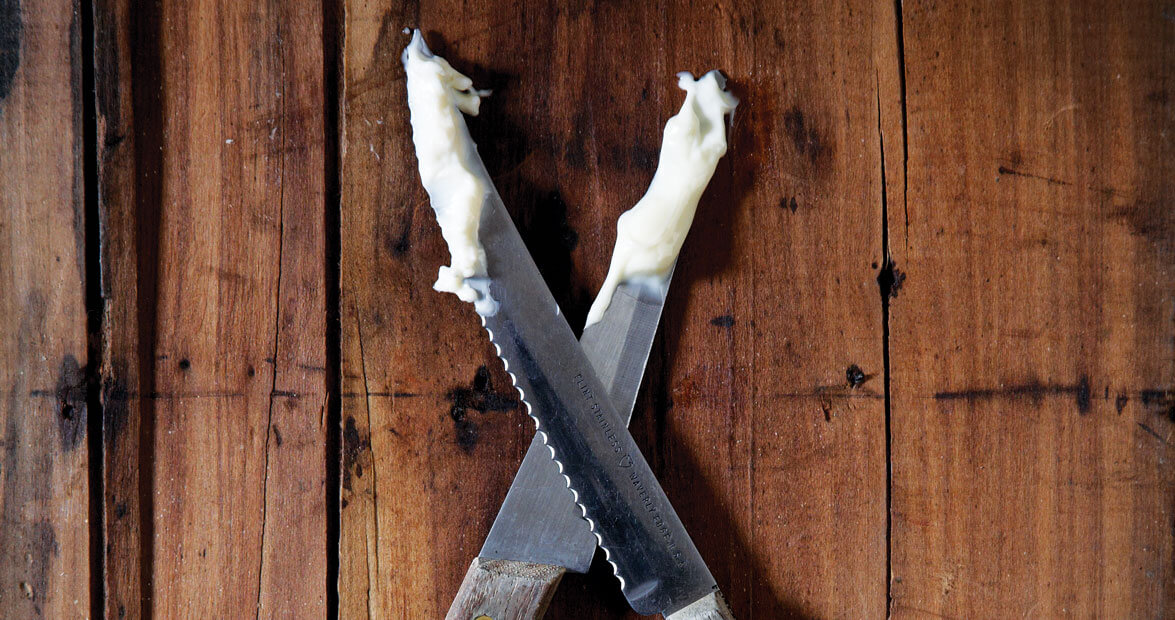 I trace my personal history with mayonnaise to a first-grade contest, when I made Raggedy Ann Salad from a Betty Crocker picture cookbook for children. Raggedy Ann’s body was a canned peach half. She had celery-stick legs, pimiento eyes, and a dollop of mayonnaise as a white ribbon in her American cheese strips hair. I won second prize for … I have no idea.

Not that I would have touched the salad with a 10-foot pole, much less a fork. I’m not a fan of the mayonnaise dollop. Dollops are so visible, so obvious. Dollops are for tomato aspic. Dollops imply Girl Food. But I ate mayo every other way as a child, a particular favorite being potato-chip-and-mayonnaise sandwiches on white bread. My mother mixed mayo and ketchup together for salad dressing, an ersatz Thousand Island, and today, I regard mayo and ketchup on an iceberg wedge right up there with mashed potatoes as true comfort food. (What do you think that Big Mac “special sauce” is?) My cucumber sandwiches are, in the end, mainly about the mayo. I prefer to eat my sliced chicken or turkey sandwiches with an open jar of mayo close by, and a knife with which to slather extra on every separate bite. I make a convincing argument for mayo being added to a peanut-butter-and-banana sandwich.

And speaking of arguments, where we live, mayonnaise isn’t so much about the condiment as it is about what kind you use: Duke’s or Hellmann’s. There’s a lot of, uh, vehemence about mayo preference. I know, because I conducted an extremely scientific poll through that most accurate of predictors, social media. The replies were instant, definite, and occasionally, just short of what my mother would call “not nice.” By overwhelming majority, the answer was one word with a trail of exclamation points: Duke’s. Among the more creative responses was, “I asked my homegrown tomatoes. They said Duke’s and frankly looked a little offended at the question.”

Mayo loyalty is not to be trifled with. There are people out there who are actually making two batches of potato salad or coleslaw, labeling them Mayo A and Mayo B, serving them at picnics and barbecues for taste tests, and then taking the time to write about the experiment on the Internet. This is passion in action.

There are also people for whom mayonnaise is anathema, for aesthetic (“It makes me shiver,” shudders my child) or heart-health reasons, but I’ve no use for them for the purpose of my study. Or ever, actually. On medical advice, my father eschewed bacon, ice cream, eggs, and mayonnaise — cholesterol incarnate — for 20 years, only to die of cancer. Get in there.

I thought Duke’s was strictly a South Carolina thing, like red dots on liquor stores. My impressions are borne out by its history. In 1917, Mrs. Eugenia Duke of Greenville, South Carolina, sold sandwiches (spread with her homemade mayo) to soldiers stationed at nearby Camp Sevier. Soldiers wrote to Eugenia, requesting the recipe, and a local grocer began selling bottles of her mayonnaise on consignment. She had to move operations from her kitchen to an outbuilding to handle the volume of requests. The day she sold her 11,000th sandwich, Eugenia finally invested in a delivery truck.

As someone who’s made thousands of sandwiches, I can’t say as I blame her.

Homemade mayonnaise is a lost art. At a garden club’s annual fund-raising auction, one member’s single half-pint jar of homemade mayonnaise sold for $40. Forty dollars. The member’s recipe includes a secret ingredient that she refuses to reveal. Homemade mayo is also a lost art because people have grown afraid of raw eggs and whatever type of probable ptomaine they harbor. For me, homemade mayo was never a lost art, a secret ingredient, or egg paranoia. It was, instead, an avoided endeavor. I could use my Cuisinart, I suppose, to do all that “pour in a steady stream” emulsifying, but I’m just lazy.

Meanwhile, I speak for the voiceless, the also-ran, and the occasionally shunned. For the blue-ribboned jar that has to fight its way through a Duke’s-dominated domain: Hellmann’s. My Costco membership fee is worth the purchase of Hellmann’s in jars big enough to fit over my head. I own a mayonnaise knife, shaped only and especially to scrape the last globs from the inside of that oddly shaped Hellmann’s jar. My egg salad is famous, and it’s made with Hellmann’s. And, I might add, Hellmann’s is the best-selling mayonnaise in these United States.

Not being partial or anything. Just saying.

Hellmann’s holds the “oldest” superlative (calm down; mere facts), too. In 1905, German immigrant Richard Hellmann opened a delicatessen in New York City. His mayonnaise was featured in salads and sold in the deli, and quickly became so popular that Hellmann began selling it in wooden “boats” meant to be used to weigh butter. One hundred and ten years later, at least 10 different kinds of Hellmann’s are available, along with limited-edition flavors like Mediterranean Garlic and Spicy Buffalo.

Never mind the brand; we can’t even agree where or how mayonnaise originated. Some sources trace the origin to the town of Mahón in Menorca, Spain, where it was known as salsa mahonesa. The French claim its invention, too. The sauce may have been christened mayennaise after Charles de Lorraine, Duke of Mayenne, because he took the time to finish his meal of chicken with cold sauce before being defeated in the Battle of Arques in 1589.

Then again, mayonnaise is said to be the invention of the French chef of the Duke de Richelieu 167 years later, in 1756. While the duke was busy defeating the British at Port Mahon, his chef was creating a feast that included a sauce made of cream and eggs. When the chef realized that cream was unavailable, he substituted olive oil. Necessity is the mother of invention, as well as a new culinary masterpiece, which the chef named “Mahonnaise” in honor of the duke’s victory.

Those French. Always at the front of the culinary “mine” line.

Still, the histories include two dukes. Maybe Eugenia Duke, down there in South Carolina, had been studying up and knew she was on to a name with lineage, which trumps a blue ribbon on the label every time.

Being an open-minded reporter, I conducted an anthropological study right up there with those of Margaret Mead, and experimented with a typical-but-not-rabid Hellmann’s family. Initial impressions: Duke’s is definitely creamier. It doesn’t perch gelatinously on the knife blade, like Hellmann’s does. A plus. Duke’s is definitely yellower, a more suspect color than Hellmann’s vanilla-white. A minus. Taste yielded indefinite results, so out came the blindfolds, and noses were put to the test. I didn’t even allow the subjects to hold the respective jars under their own noses, because the shapes differ. No cheating. And the main difference, very simply, lies in the aroma. Duke’s is tarter, with a more distinctive, almost vinegary, smell. Hellmann’s is more neutral.

That said, though, someone will immediately claim to prefer the “saltier, more citric” taste of Hellmann’s. Or point out that Duke’s contains no sugar.

So let us revert to our corners of the kitchen, defiant and undefeated, call it a draw, and pull out knives instead. Slather away, undaunted by comparisons. Spoon it into chicken and tuna and egg and potato salads; measure it into coleslaw and salad dressings and casseroles; and spread it on sandwiches and chicken breasts to coat with crushed ranch dressing potato chips. Take pleasure in the myriad of  mayo applications out there, as evidenced by this comment: “My father loved a slice of fruitcake spread with mayo.” Who knew?

Me, I’m waiting for the ultimate Girl Food to become trendy again: chilled, crustless, soft-bread finger sandwiches with a “vegetable spread” — ultra-finely minced celery, peppers, carrots, cukes, and olives bound by a delectably gooey paste made of cream cheese and … you know.