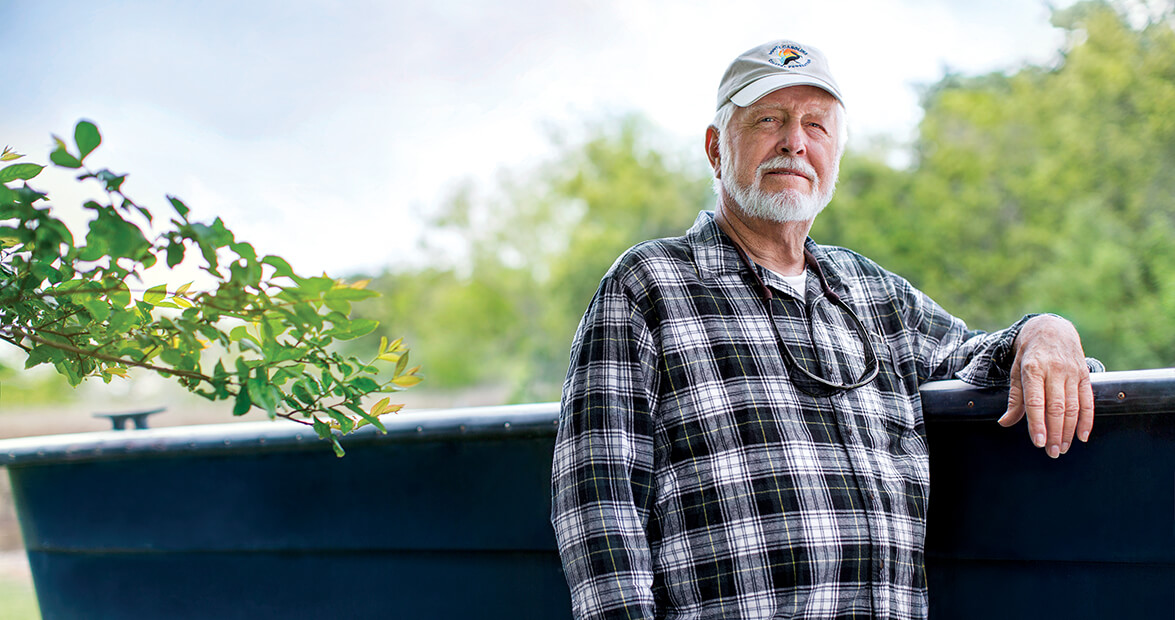 The ferryman sat on a stump in his soggy yard, shivering in the spring sunshine, watching his son haul life jackets from the garage.

Rudy Austin, 74, wondered when he’d be back on his boat. Tourist season was starting, and he wanted to return to taking visitors to Portsmouth Island. Like his family had done for more than a century.

But Captain Rudy needed to heal from heart surgery. For about two months, until he returned to the helm, the waterman was landlocked.

When you’re working on the water, when you’re watching waves and weather — whether you’re driving a 30-vehicle, state-owned ferry or steering your own 12-passenger boat — you have to be so aware, so in the moment, that you seldom stop to see the big picture, or wonder: What if?

But when you’re firmly anchored, you have too much time to ponder the past — and face the future.

“I’d just like to maintain what we had here,” Rudy says.

Portsmouth Island — also known as North Core Banks — is one of the southernmost strands on the long, thin string of North Carolina’s Outer Banks — and one of the state’s last uninhabited islands.

The sliver of sand stretches south of Ocracoke, 22 miles toward Cape Lookout, and includes the barrier islands’ first planned village. Chartered by the state in 1753, the bustling port hosted ships sailing the Atlantic that stopped to unload their heavy cargo, and smaller vessels that took the goods across the shallow inlets to mainland cities.

In 1842, two-thirds of North Carolina’s exports passed across Portsmouth’s wooden docks. By the start of the Civil War, 685 people lived there. The island had its own school, two churches, a post office, and a hospital. Two-story houses and bungalows lined dirt paths that snaked through the marshy hammocks.

Rudy’s great-grandfather worked at the U.S. Life-Saving Station there in the early 1900s, scanning the frothy sea for sinking ships and sailors. Rudy’s grandfather ran a supply boat out of Elizabeth City that serviced life-saving and Coast Guard stations on the Outer Banks, and married Rudy’s grandmother in Portsmouth’s quaint Methodist church.

Rudy learned to swim before he could walk and was piloting his own boat before he started school.

Rudy grew up on Ocracoke, on the same shady circle where his great-grandmother lived, on the same street where his brother, aunt, both children, and all five grandkids still live. His dad looked after the life-saving station on Portsmouth Island, which had been turned into a private hunt club. He carried men from up and down the East Coast to the island to shoot pheasant, ducks, and geese, and snare bluefish and drum.

“Going to Portsmouth Island meant Dad was going to put us to work,” says Rudy, who learned to swim before he could walk and was piloting his own boat before he started school. “We planted grass and cut down mangroves. We fixed walls and windows and hauled everything across that island. A bunch of us boys even built that grass airstrip.”

Over the years, hurricanes filled channels along Portsmouth and cut new inlets across the Outer Banks. Ships started steering clear of the island. Residents started moving away, leaving their homes with lace curtains still fluttering in the windows, flour canisters still on the shelves. By 1970, when Rudy began driving ferries for the state, only three people still lived on Portsmouth Island. The next year, when the sole male resident died, the last two women moved away, leaving the island empty.

The National Park Service took over Portsmouth in 1976, including the wide, wind-swept beaches and isolated village in Cape Lookout National Seashore. Federal funds helped restore the church, post office, school, and life-saving station, all of which are open to the public. You can still pray in the wooden pews, stand at the stamp counter, and even climb the old life-saving tower to scan the sea. 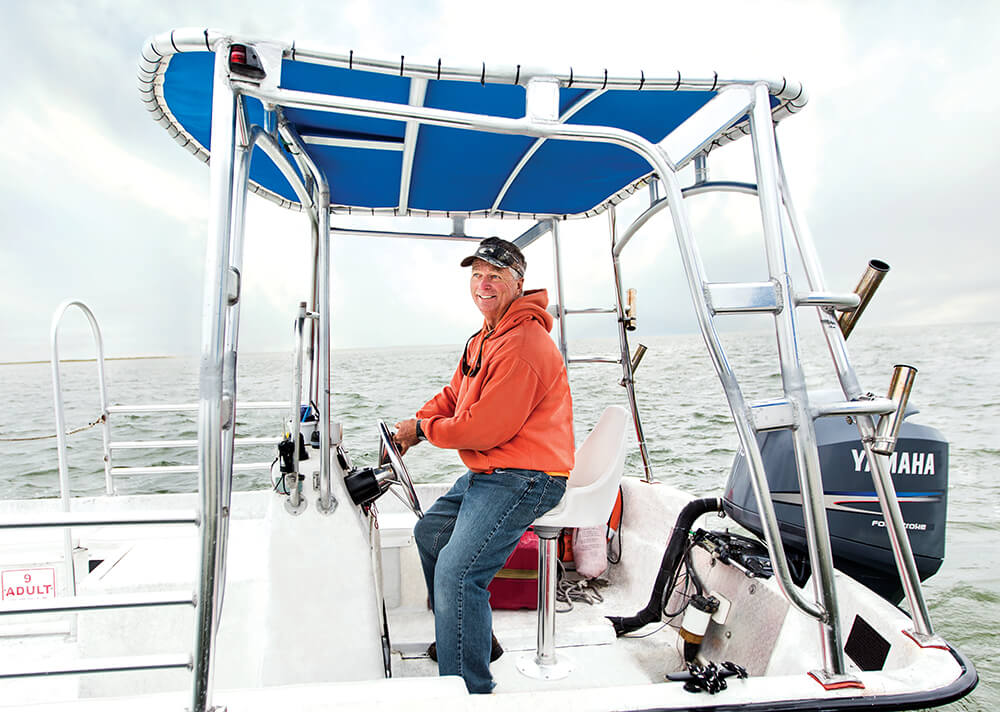 Donald Austin is at home in the captain’s seat: He shares skippering duties with his older brother, Rudy. photograph by Natalia Weedy

But no one ever built a bridge to the island. So the same year Portsmouth became a protected park, Rudy’s dad got a permit to run a private ferry there: an 18-foot skiff that carried six passengers. He remained the only captain licensed to take people to Portsmouth Island from Ocracoke until 1979, when he had a stroke.

For more than 30 years, the blue-eyed captain made his living on the water, crisscrossing shifting inlets, shuttling passengers between the remote islands. Some evenings, until midnight, he ferried cars from Hatteras to Ocracoke for the state. Other days, he took tourists to Portsmouth to fish, scout for shells, pad along the sandy paths, explore the ghostly buildings, and have the beach all to themselves.

“I never meant to be a ferry boat driver,” Rudy says. “I joined the Air Force, went a lot of places. But I never found anywhere better. I just hope we can hold on here.”

A storm blows in as Rudy’s brother guides the 24-foot Carolina skiff across the green-gray foam of Ocracoke Inlet. Donald Austin, 61, steers into the shimmering sheets of rain. Buoys, blinking channel markers, and decrepit duck blinds blur by. In the distance, the dark silhouette of trees sprout from the horizon.

Donald is 14 years younger than Rudy, and never moved off the island. He has steered state ferries from Ocracoke to Cedar Island. He started helping with his family’s private Portsmouth shuttle in 1996, after his dad died. When his brother was laid up, Donald was the only person running passengers from Ocracoke to the abandoned island. (Other ferries run from Atlantic.)

Donald ties his boat to the dock, and walks the long wooden planks through the rain into the village, where a two-story home has been turned into a visitor center. “We get about 10,000 visitors a year, 90 percent from Ocracoke,” says Dave Frum, the National Park Service maintenance man who has overseen Portsmouth Island for 26 years. “It’s pretty limited to what the Austins can do.

“All these years, they’ve been the only lifeline for everyone else who wants to come here,” the caretaker says. “We depend on them entirely.”

Frum worries about Rudy and Don. How many more years can they keep carrying passengers?

Like the Austins, Frum also worries about the island they live on. Ocracoke’s slowly being strangled, they say. Visitation is falling. And they’re all uncertain about what will happen to Portsmouth Village, which they’re trying so hard to preserve. If the family ferry shuts down, how will strangers see?

“It’s our history. The way the Outer Banks used to be before bridges and condos and golf courses,” Donald says, walking back to his boat. “It’s the only place like this left.”

Storms. Politics. Lack of jobs and funding. Those are the biggest threats to Ocracoke — and, therefore, to Portsmouth Island — say the brothers.

The slender slips of sand always have been fragile, shifting with tides and seasons, surrounded by deep sloughs and shallow sandbars that also move without warning. One morning, there’s a shipping channel. By nightfall, it’s filled in. And another inlet has opened somewhere south.

The beginning of the end, Rudy says, was when Hurricane Sandy blew through the Outer Banks four years ago, filling in the trough that state ferries followed between Hatteras and Ocracoke islands.

Instead of dredging the channel and reopening the short passage, state officials redirected the free car ferries to a much longer route — cutting back on the number of trips per day, and causing long lines at the docks.

“No one wants to wait three hours for a ferry,” Rudy says. “Because of backups, we’re losing 30 percent of our day-trippers. I lose people weekly who cancel because they don’t want to wait.”

If visitors won’t go to Ocracoke, they can’t come to Portsmouth.

Donald pushes off from the long dock at Portsmouth, sweating in the storm’s sticky aftermath, watching over his shoulder as the island disappears.

He’s been guiding boats across this watery road since he could remember.

As he steers toward Ocracoke, he wipes salt spray from his eyes and looks ahead. In the summer, Donald and his son have more time to spend together on the water.

Donald’s son, Perry, is 14. When the boy was younger, he loved going to the ghost town with his dad.

He ties up the passenger ferry, steps out of his wet oilskins, and heads for home. Rudy’s there, waiting in the shady circle between their homes. Rudy’s son, Wade, is still busy in the garage.

Wade moved to Greenville after high school, but came back to Ocracoke after college. Now he runs ATV tours of Portsmouth Island and helps his dad and uncle when needed.

Both ferrymen would love for their boys to stay on the island and carry on the family business. Rudy acknowledges that they may have other dreams, but says, “Right now they seem to be interested.”