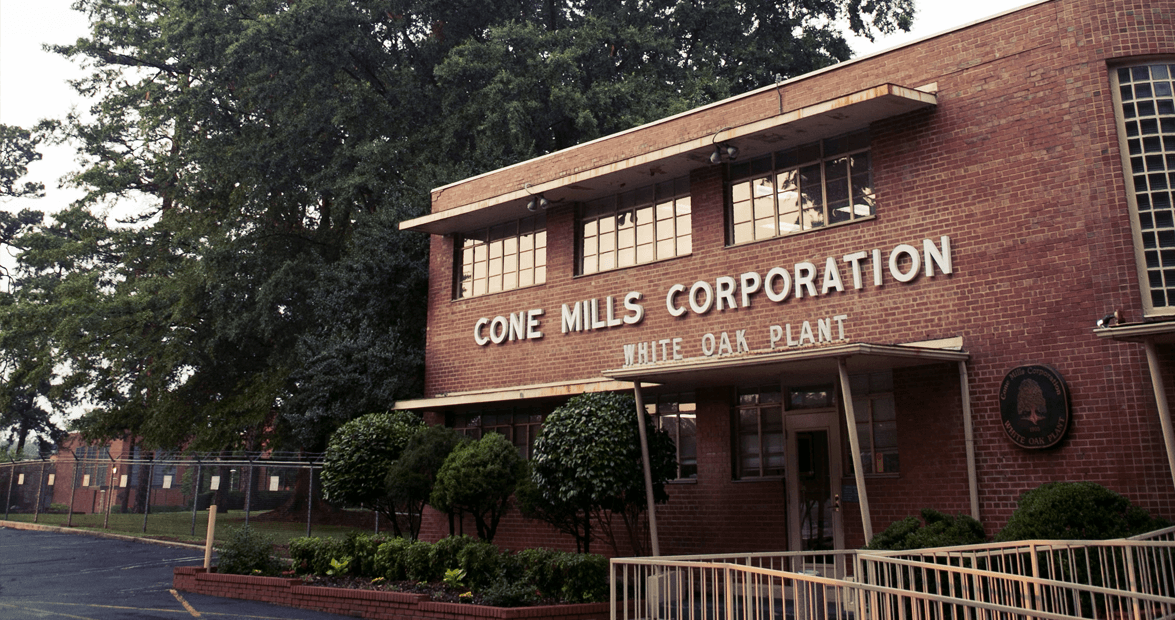 The Cone brothers came to North Carolina from Baltimore just before the turn of the 20th century because they saw opportunity in the business of transforming cotton from bales of raw fiber to rolls of dyed fabric.

By 1912, they had founded four mills in Guilford County — White Oak Cotton Mill, Proximity Cotton Mill, Revolution Cotton Mill, and Proximity Print Works — and were in the process of transforming Greensboro from a small town laced with dirt roads to a vibrant city of international importance. (White Oak, which opened in 1905 and supplies Levi Strauss & Co., had, by 1908, become the largest denim producer in the world.)

Lillie Mae Crum, now 91, was one of many whose world was shaped by the mills. For 45 years, from 1941 to 1986, she worked in the White Oak weave room, patrolling the aisles between the 54 shuttle looms under her watch, making sure the filling forks stayed clear of lint and that the binders didn’t snag.

Sitting at her kitchen table, the North Carolina native recalls the time when her life — like the lives of thousands of others who wove, spun, carded, and dyed — revolved around cotton.

During those years, Crum could produce as many as 2,700 yards — more than a mile and a half — of denim fabric during an eight-hour shift, and she often earned recognition on the company bulletin board for her superlative rate.

“I took great pride in being able to make production and turn out good cloth,” Crum says. “I liked seeing the cloth come off the loom perfect, with no bad places.”

Though she enjoyed the work, the conditions were challenging. Inside the 1,200-foot-long weave room, the 3,000 looms shuttling back and forth simultaneously produced a deafening clackita-clackita-clackita noise that required employees to stand inches apart and shout, or learn to lip-read, to communicate. To keep the loom threads hydrated, humidifiers periodically sprayed a fine mist over the room, which wasn’t air-conditioned until the 1970s. Lint swirled continuously through the air, coating the weavers’ hair in a layer of blue fuzz. And the weavers rarely stopped for breaks.

“When the loom stopped, my money stopped,” Crum says, “and I didn’t go down there for fun.”

Originally from Leaksville (now Eden), Crum moved to Greensboro at the age of 3 with her parents in 1926. Her father got a job as a fixer in the spinning room at White Oak, and, in between pregnancies, her mother worked as a weaver.

To supply its employees with everything they needed, the Cones built self-sustaining towns adjacent to each of its Greensboro mills. For 69 cents a week, Crum’s family lived in a house in the White Oak village, which contained company-owned schools, several churches, a grocery store, a department store, a medical center, a dry cleaning service, a YMCA, playing fields, a dairy, and a milk delivery service.

As a child, Crum learned to bake lemon cookies and stitch aprons from a company-employed teacher named Minnie Fields. She recalls how the Cones gave each family a turkey for Thanksgiving and a ham at Christmas.

“I’ve never heard of anyone who cared for their employees like they did,” she says.

The oldest of seven children, Crum spent much of her youth helping to raise her siblings. She began working at the age of 9, staying the night with women who didn’t want to be alone while their husbands worked third shift.

At 16, she secured a job at the Blue Bell sewing factory and married a man who worked in the White Oak carding room.

Soon after, Crum found work at White Oak herself, keeping the looms supplied with yarn spools for 32 cents an hour. Over the years, she became a weaver (averaging $56 per week in the early 1950s), a weaving teacher, and an industrial engineer tasked with improving weaving room efficiency.

Until Cone Mills began selling off the mill houses in the late 1940s, the Crums and their four sons lived in the White Oak village near where Crum had grown up.

“It was really a community within a community; everybody looked after everybody,” she says. “You don’t find that anymore.” 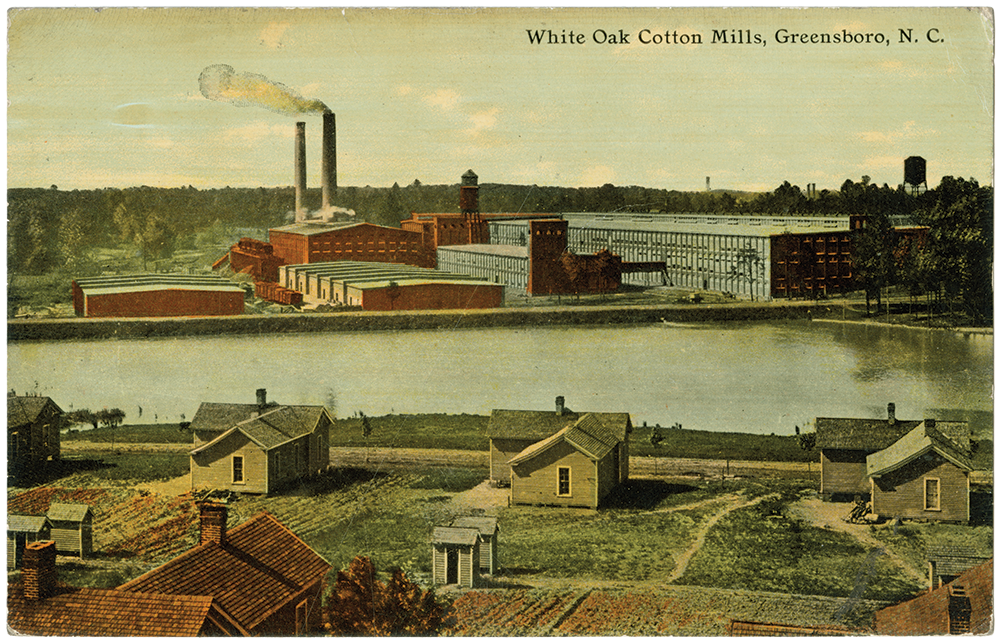 A 1914 postcard shows how close home and work life were for mill village families: The White Oak Plant was always in sight of the hill houses across the river. • Image courtesy of the North Carolina Collection, Wilson Library, UNC-Chapel Hill. photograph by Joy Kaplan

In recent decades, all of the Greensboro mills have gone out of business except for White Oak. Now owned by International Textile Group, the redbrick factory runs a few hundred of the old shuttle looms, producing denim for high-end companies like Levi’s Vintage Denim, Raleigh Denim, Roy, and Jack Spade.

Though working cotton mills no longer dominate the North Carolina landscape, their influence has not diminished. These processors played a tremendous role in Greensboro’s development, helping to establish the city’s economic base and many aspects of its infrastructure. They enabled several generations to provide their families with security and opportunities they would not have had otherwise. And they defined the people of North Carolina as industrious and tenacious and inextricably linked to the land.

Now, overlooking her backyard garden, where she cares for three chickens and grows tomatoes, beans, squash, and muscadines, Crum articulates the ideals she and her companions developed as temperatures skyrocketed, humidifiers sprayed, and lint flew over the weave room floor.

“Hard work don’t hurt nobody,” she says. “If you ever expect to have anything, you have to work for it.”