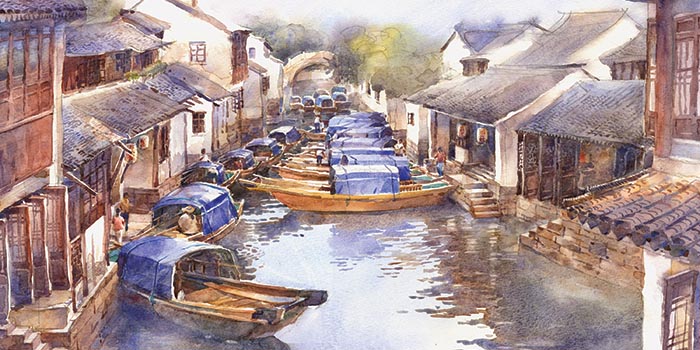 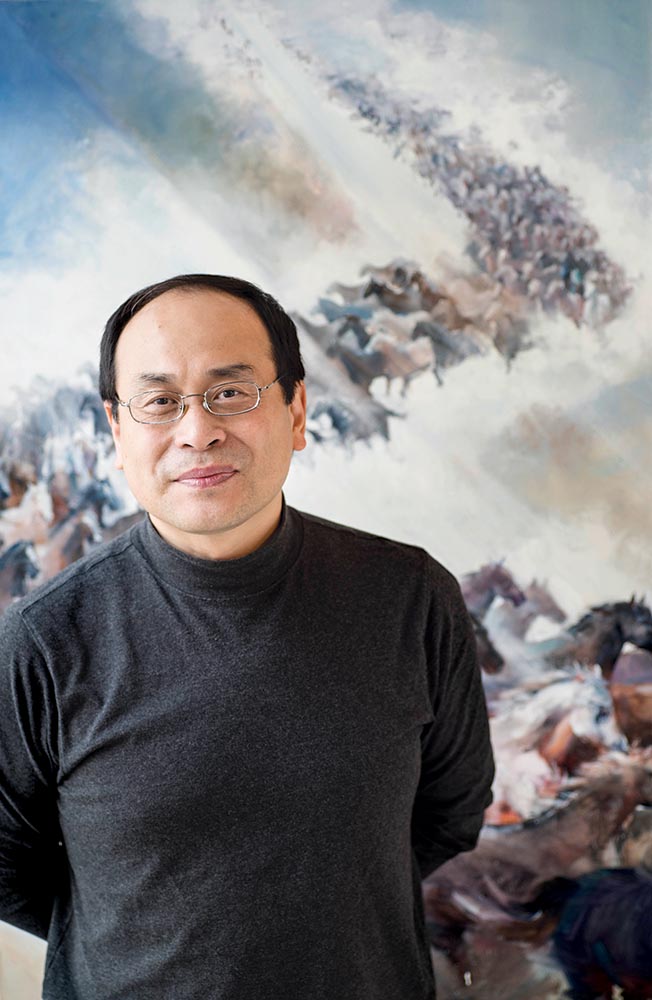 “This is my hometown,” says JJ Jiang, indicating a watercolor of a town in southeast China at Cary’s Village Art Circle gallery and studio. In the painting, small wooden boats with blue awnings fill a canal edged by thatched-roof buildings. In the distance, trees peek over garden walls. The palette is warm but muted, the mood quiet and calm.

Although Jiang hasn’t lived in Suzhou since he left for college, the town’s spirit — embodied for him by its water — has infused his life and art ever since.

“Water is emotional and spiritual,” he says. “It’s inseparable from my culture, my living experience, and my memory.”

A North Carolina resident for the past 17 years, Jiang lives primarily in Cary, though in 2005 he purchased a second home in Oriental, to be closer to the ocean. Professionally, he splits his time between architectural illustrations and his true passion, fine art — landscapes and figures in watercolor and oil.

In April 2013, Jiang opened the Village Art Circle in downtown Cary to further the cause of art in his community. In addition to featuring the work of 19 member-artists from the Triangle area, the space hosts classes and art-related gatherings.

Most people associate creativity more with Raleigh and Durham, Jiang says, and they don’t realize the artistic talent that Cary possesses. “We just haven’t formed a force to change people’s perceptions,” he says. “If we have more galleries, and they collaborate to foster more art-related things, we might be able to change that impression. We want to have a renaissance here in Cary.”

Jiang was born in Suzhou in 1962, four years before the start of the decade-long Great Proletarian Cultural Revolution in the People’s Republic of China. Growing up, he saw bloody gang fights in the streets and heard the unceasing wail of sirens as Mao Zedong tried to enforce Communism across the land. As part of his education, Jiang and his classmates were often sent out to help workers in the fields and factories. In search of solace, the young artist would retreat to a corner of his house, where he drew, painted, and read and wrote poetry.

“It sheltered me from the chaos outside,” he says. 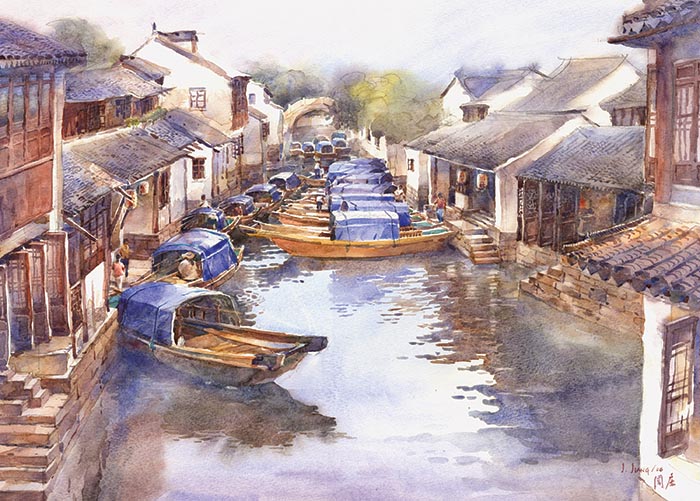 Jiang pursued architecture in college and graduate school in hopes of making a living in an art-related field. He met Sue, a New York native who would become his wife, when they were both teaching at Huaqiao University. The couple lived for three years in New York and then for four in Hong Kong, where Jiang worked for one of the most influential firms in Asia.

In 1997, they moved back to the States — to Cary, near some of Sue’s relatives. It was a tough adjustment for Jiang at first, but now North Carolina feels like home. “I’m really a local now,” he says. “Now I go back to China, and I don’t quite fit in anymore. My hometown has 6 or 7 million people. It’s an overwhelming scale.”

North Carolina, on the other hand, has natural beauty and the geographic range of both mountains and ocean. Plus, Jiang has been able to move away from full-time architecture and pursue his own art here, and the slower pace engenders creativity. During his visits to Oriental, he walks on the beach, goes fishing, and lies on the pier, looking up at the sky.

As an artist, Jiang is constantly evolving. When he was younger, he admired Western culture and art and did not hold China’s in particularly high regard. As he’s aged, though, he has developed a deep appreciation for the Chinese aesthetic. Now, in his work, he strives to integrate the East and West, symbolized for him by the waters of his new home, Oriental, and his old home, Suzhou. “I want to converge the two waters,” he says. “It’s a must. It’s something unique I can offer the world.”