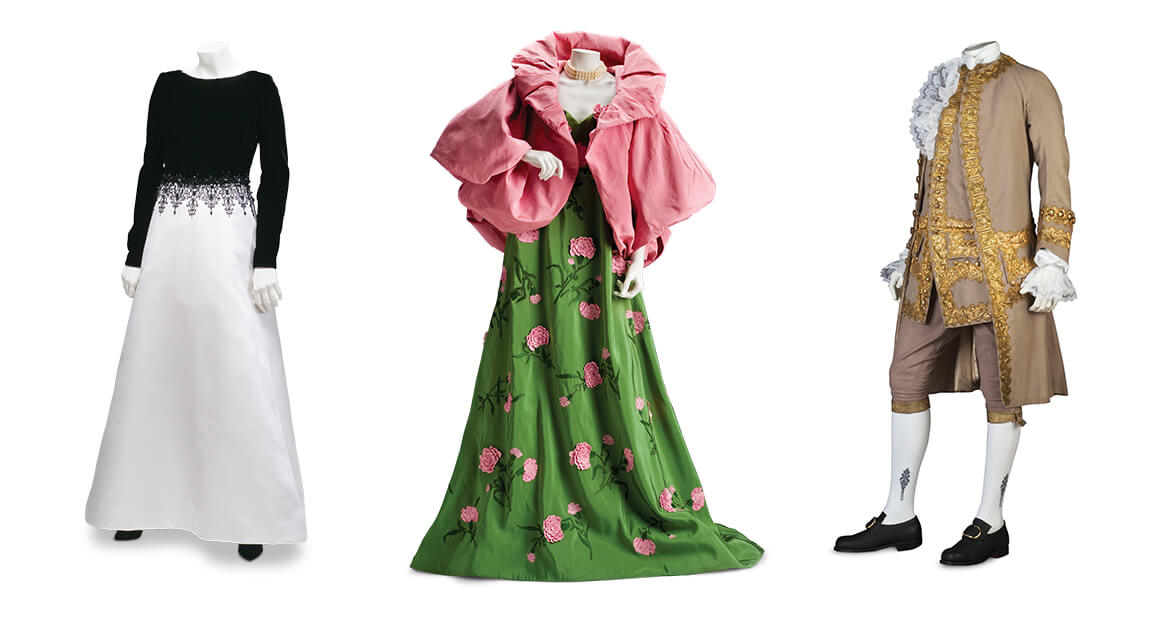 On a stroll through Charlotte’s Mint Museum, you might not relate to the carved Mexican greenstone human-feline hacha from the sixth century, or that Tang Dynasty lead-glazed earthenware Bactrian camel, but you’ll pause at the clothing exhibits.

Because everyone relates to clothes. We all wear them. Well, most of us.

By the way, curators would rather you say “costumes” instead of “clothes” when referring to their exhibits. I need a clothing/costume curator. Instead, I have to depend on my sisters. The three of us take pictures of our clothes, send them to each other, and ask, “Should I keep this anymore, or is it tired?” In the email subject line, we type INAOAIKYHO, which stands for “I need an opinion, and I know you’ll have one.”

But we do love gazing upon those Colonial-era getups, amazed by all the frills and furbelows, and grateful that we don’t have to fasten all those rows of buttons or fit into that corset. On the other hand, that calash bonnet in the Mint’s Fashion Collection basically negates the need for sunscreen. And for that matter, bad hair days. Best of all, as manufacturers like to brag, it travels like a dream, folding flat like an accordion. My visor can’t do that. I have to pack socks around it to support the cardboard brim.

Early fashion is intriguing, and it teaches us about the periods our ancestors lived in. The social mores of their age, the lifestyles of their era. How clothing was constructed, what textiles and materials were created or were readily at hand. What was important to them in design, whether for purely practical reasons or for purely show-off reasons. And it’s handy — even thrilling — to learn the lingo: ruching, for example, or jabot. To realize that a caraco isn’t chocolate, but a jacket, silly, and that a fichu is a scarf, not a breed of miniature dog.

But why — unless a president’s wife wore it — is a Chanel jacket, or Halston’s signature Ultrasuede shirtdress, at the Mint? “If fashion is in a museum, it’s no different from a painting or a ceramic piece,” explains the Mint’s senior curator of Craft, Design, and Fashion, Annie Carlano. “It’s here because it’s valued. It’s a masterwork of some type.”

Leave it to the ladies to realize that clothes are worth preserving for posterity. In 1972, the women of the Mint Museum Auxiliary began a concerted effort to save community heirlooms. Although the Mint has two Charlotte locations, Uptown and on Randolph Road, “the Fashion Collection is housed in [Mint Museum Randolph] because it was born here,” Carlano says. The volunteer auxiliary members came from the nearby neighborhoods. They weren’t only collecting from the community, but from their own closets — their grandmothers’ wedding dresses as well as their own evening gowns.

Moreover, they donated and raised money to acquire that court suit and ball gown and robe à la française dressed à la Polonaise. “The auxiliary has made it possible to buy every single 18th-century dress we’ve purchased,” Carlano says. “We are so grateful to them.” More than four decades later, the auxiliary still has a fashion committee. The Fashion Collection spans three centuries of fashion history, and, with 10,000 items, it’s one of the primary artistic focus areas of the Mint. You read that right: 10,000. Never complain about your closet space again. 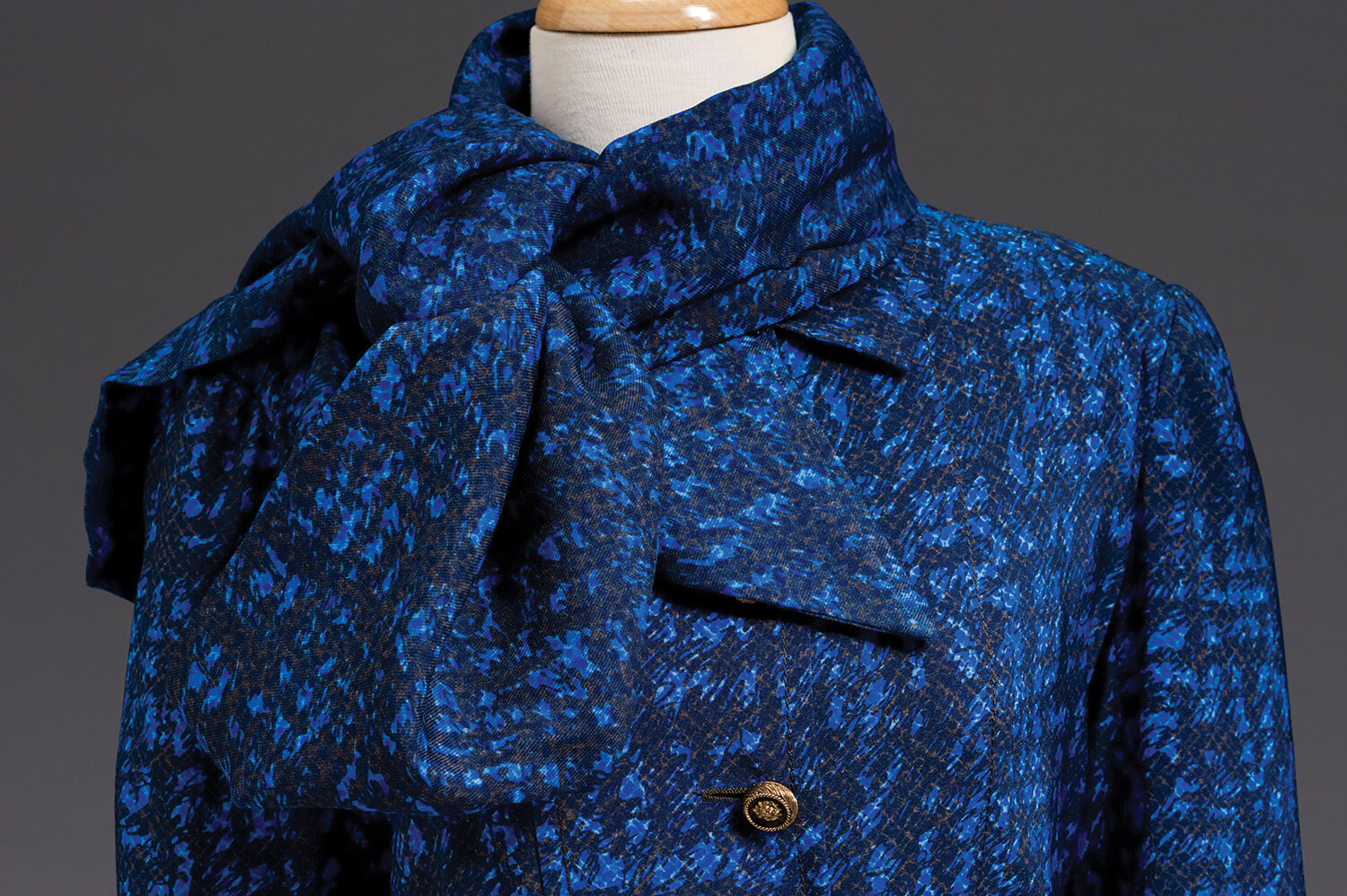 The Mint has had a curator of fashion since the early ’70s, as well. Carlano, who’s held the position for more than six years, says, “Fashion history matters a lot to women, who are the majority of North Carolinians.” She substitutes “artistic dress” as a synonym for fashion, and gives my Tar Heel gender a pat on our stylish backs: “North Carolina has a long tradition of fashion-savvy women, with a distinct sense of style, from hats to shoes.”

Still, all 10,000 of those articles can’t be on exhibit at the same time. Nor should they. Dust, light, hanging, and even air will erode the textiles. Various pieces are displayed for only six months, though they may also be exhibited for larger-topic, thematic shows, such as a tribute to the Depression or the Swinging Sixties.

You may recall ’60s style as fringed leather vests and bell-bottoms, but your child, or grandchild, can’t. And that’s why fashion has a place in a building dedicated to human creativity. Of course, you should also know the difference between “costume” and “couture.” Couture is a made-to-measure article of clothing, and the Mint’s collection of couture spans more than a century and includes, among other designers, Givenchy, Doucet, Bill Blass, Versace, and Prada. Can’t tell one from the other? Another reason for a fashion collection. These aren’t outfits from Masterpiece Theatre or a Cineplex biopic. They were worn by real people living in the real world. And Carlano’s eyes are watching your back, too. “Oh yes,” she says. “There are people to whom we say, ‘If you ever stop wearing that, we want it.’ They wear their clothes very carefully.”

When an item is donated, the Mint’s collection-care specialists — hired just for this purpose — prepare it for storage. The department is currently in  “assessment mode,” examining and describing every article, so they know what they have and what condition it’s in. As a sort of sidebar exhibit, an instructive video called “Behind the Scenes” has illustrated to museumgoers how fashion exhibits are painstakingly de-installed and packed away. The task bears little resemblance to throwing your clothes on the floor and hoping the fairies will come pick them up, as I generally do.

At the moment, Carlano is most excited about a designer named Moschino. No, say it correctly, because the word is about to put North Carolina on both the fashion and museum maps: Muss-KEE-no. For the first time anywhere on the planet, a retrospective on Franco Moschino, an Italian designer, will open October 31 at the Mint Uptown, in the Gorelick Gallery, the museum’s largest special exhibition gallery. Franco Moschino (1950-1994) was appreciated more by Europeans and rock stars than by Americans in the decade he was designing, and though he was “first to do a lot of things, he was ignored during his lifetime,” Carlano says. “There’s no history or book about him.”

A museum retrospective is different from a plain old exhibit. “It’s a significant contribution to art history, and a real scholarly endeavor,” Carlano explains. “We’re providing critical art assessment and historical information, and that publication and that exhibition will be the benchmark that others will build on, and copy from.”

And how did the Mint land this treasure? Pure serendipity. A longtime Mint supporter, Deidre Grubb, approached Carlano, and revealed that her mother has one of the most important collections of Moschino in the country. As does Grubb herself. And now, her 12-year-old daughter has begun to collect Moschino. “So we not only have the first showing of the genius of Franco Moschino, but also the story of three generations of women collecting one designer.” His work is playful and witty, and the exhibit includes 40 pieces, such as his LBD — little black dress — which is a simple, black, A-line style, except for the phrase BE SIMPLE embroidered in white across the front. A woman’s beautiful white blouse bears what looks like scorch marks from an iron. On the back, it reads TOO MUCH IRONY. “The market for Moschino will go up by virtue of the fact that we’re doing a retrospective,” Carlano says.

As a painter selects her subject, and her colors, and her brushes, so, too, does a designer choose his style, his colors, and his fabrics, be they worsted wool, tulle, or, as with a Moschino dress Carlano herself owns, safety pins. Thus fashion becomes art, art worth preserving and displaying. “From Raleigh to Wilmington, innovative designers are making blue jeans, jewelry, and ball gowns,” Carlano says. “Fashion matters! It communicates who we are, our values, and personality.”

My father, who was in the business of manufacturing women’s clothing, used to mortify me when he asked my big-city friends: “Nice dress. Didja pay retail for it?” For those of us who have no hope of paying retail or otherwise for couture, the Mint’s ever-changing Fashion Collection is a ticket to experiencing the appeal and passion of, well, creativity in clothing. There, behind glass or on mannequins, is wearable art — designed for a body, not a wall — to covet, puzzle over, or simply gawk at. Call it clothing, costume, couture, or artistic dress — admiring the cut and quality of a Dior dinner dress is far more enlightening than all those how-to-tie-a-scarf emails in your inbox.

VIVA MOSCHINO! will run from October 31-April 3, 2016. Most of the Fashion Collection is currently off view for conservation, but is planned to reopen in the fall of 2016, in conjunction with the museum’s 80th anniversary.