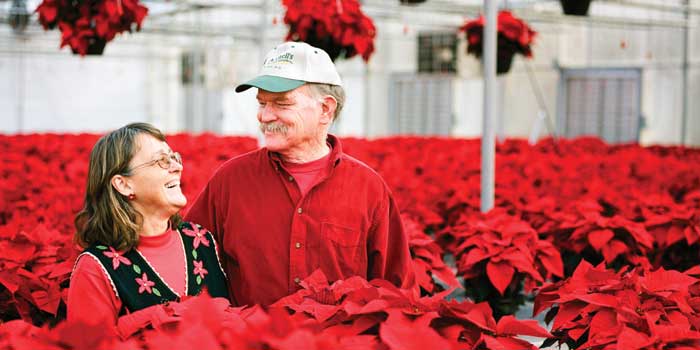 A poinsettia’s life has three stages.

The plant that decorates your Christmas table starts in a place far from North Carolina, somewhere like New Jersey or California. It begins as a tiny cutting from a parent plant. It sprouts roots in a tiny, plastic cup. And when the tiny plant reaches 4 weeks old and measures about 2 to 3 inches, it takes a ride in a refrigerated truck.

The truck brings the poinsettia to Mitchell’s Nursery & Greenhouse in King where it begins its second stage. Gardeners transplant it into a bigger pot, 8 inches or maybe 10, with lots of potting soil and room to grow. It receives fertilizer and water. It goes through growing pains when gardeners pinch its top. Then in late October, it starts to turn colors — white, pink, or red.

The gardeners dress it up with shiny, green foil and a red ribbon and send it out into its third stage. Now, in December, it isn’t about the plant anymore. The grown-up poinsettia now lives to give joy to others — that’s its reward.

Jim and Judy Mitchell, the owners of Mitchell’s Nursery in King, know that poinsettia journey well. They’re the gardeners who care for these traditional Christmas plants in the crucial middle stage.

This past August, 8,433 young poinsettias arrived at the nursery. Mitchell’s isn’t a powerhouse nursery like the ones where the poinsettias originated, but Mitchell’s is one of 33 greenhouses in the United States and Canada that participate in poinsettia trials. Jim and Judy planted 68 different varieties this year. They keep notes throughout the season — which ones grow evenly, which ones bloom when. Their results help the national poinsettia breeders determine which varieties to put on the market next year.

One important factor is how well customers respond to the plants. So on the first weekend of December, the Mitchells hold an open house. And they do it with true Southern hospitality. Cinnamon spikes the greenhouse’s earthy smell as apple cider warms in the makeshift lobby. Homemade chicken-salad and pimento-cheese sandwiches fill Tupperware containers. Friends and neighbors don red aprons and tie bows.

Last year, 300 people came through the greenhouse that weekend. Each visitor received a ballot to vote for his favorite variety.

“Folks ooh and ah over the different ones, but most vote for the red,” Judy says. New novelty varieties come out every year. ‘Shimmer surprise’, red with white flecks. ‘Cortez white’, the color of snow cream. And ‘Christmas angel’, a soft, pale pink. But the traditional ‘freedom red’ is hard to beat.

Jim and Judy are partial to red. They studied horticulture at North Carolina State University. During the summer of 1974, they went on a school field trip to the International Horticulture Convention at the University of Guelph in Ontario, Canada.

“We visited one greenhouse operation that grafted cactus,” Jim says. “And when you looked out across them, it looked like a sea of cactus.”

The greenhouse impressed Jim, but someone else on that trip impressed him more.

“I had seen him before, but that was all,” Judy says. While on the trip, wherever she turned, there was Jim. “I said, ‘I believe he’s after me.’ ”

As the two began to talk, they realized they shared the same interests and life goal — to make a living growing plants. After one year as a couple, they got married. The newlyweds lived in a small rental house in Raleigh. Jim graduated in 1976, and Judy one year later.

In the summer of 1977, Jim took a job as a pesticide inspector for the state of North Carolina. His territory included Surry, Stokes, Rockingham, Forsyth, and Davie counties. His employers suggested he move to a central location, such as Winston-Salem. But after looking at housing prices, the couple decided to live in King, a quieter place that they could afford.

Jim and Judy began to settle into their new life in the foothills. They set up a hobby house in the backyard on their third-of-an-acre lot because the local laws didn’t allow for a greenhouse, and they rooted cuttings in a small bed. In 1979, they started Mitchell’s Nursery as a side job, a small step toward their shared goal. And on September 3, 1980, their son, Jay, was born.

“I was laboring on Labor Day,” Judy says.

Jim listens as Judy recounts their story. He takes her word for it; he always has. But he can’t remember it. Jim doesn’t remember the day Judy took his last name or the day Jay took his first breath.

The first started on November 6, 1953, when he was born in Raleigh — a healthy baby boy. But 18 months later, the first stage of Jim’s life stopped when doctors diagnosed him with encephalitis. He almost died.

But he overcame the sickness and began the second stage of his life. He grew up off of Western Boulevard where he played in the dirt in his backyard. Even as a child, Jim experimented with different plants. But Jim went through growing pains, too.

“I would tell my mother, ‘I’ve got a scary feeling,’” Jim says. “I thought somebody was after me.” His parents took him to psychologists. Jim wasn’t crazy; he was having epileptic seizures. At age 12, he began taking some of the first experimental medications to treat seizures. When Jim was 16, his doctor prescribed Valium.

None of the medicines worked that well, so Jim just carried on through that crucial middle stage. A few seizures didn’t stop him from obtaining a degree, a wife, and a son.

But in 1982, those seizures put the brakes on his life.

“I had a couple of wrecks,” Jim says. He doesn’t remember, but Judy does.

One day, Jim was driving home, and instead of making the right-hand turn into his driveway, he turned left. His Ford pickup slid straight down an embankment. Another time, he stopped his state-registered car in the middle of U.S. Highway 52 for no reason. N.C. Department of Transportation workers saw him and took him to the hospital.

Jim lost his license, which meant he lost his job as a pesticide inspector. And he lost his freedom.

But he and Judy continued to work toward their goal. They concentrated on expanding Mitchell’s Nursery, and they moved to the current location on Dalton Road in 1993.

They had some close calls. Like when Jim drove the tractor into the tobacco barn — the mark’s still on the wall. Or when he drove the riding lawnmower across the road, and Judy found him sitting against a curb with the wheels spinning. But she just demoted him to the Weed eater, and they carried on.

Each seizure scared Judy. “He’d be alert, but you could tell he wasn’t there,” she says. The seizures lasted 15 seconds to an hour and a half. Sometimes he shook and fell to the ground. But Judy never broke. Jim doesn’t make decisions well, she says, so she makes them for him.

In December 1995, Judy made the biggest decision of Jim’s life. Jim was having 30 seizures a month. So he and Judy agreed to participate in a medical trial at Wake Forest Baptist Medical Center. The doctors planted two probes in Jim’s skull to find the location of the seizures. They kept notes throughout the week — which ones lasted longer, which ones were more severe. Their results would help determine the future of epileptic treatment and the future of Jim’s life.

After a week of observation, the doctors discussed the findings with Jim and Judy. And Judy told them to go ahead, to do the surgery on her husband, to try to make her and Jim’s lives better.

On December 7, the doctors removed the scar tissue, a byproduct of the seizures, from Jim’s brain. They told him to expect some improvement, maybe a reduction from 30 seizures a month to five. He spent another week in the hospital, and Judy took him home.

“This one he was not getting over,” Judy says. She called the ambulance for the first time ever. “He settled down, and I brought him back home.” She thought she had made the wrong decision about the surgery; she thought they were back where they started. But they weren’t.

After that day, Jim began the third stage of his life.
“I started walking outside and looking at plants, and it was scary because I couldn’t remember things,” Jim says. He kept calling a Burford holly a Bradford pear — at least they start with the same letter.

That summer, the Mitchells built their first greenhouse — a new starting point and another step toward their goal. The greenhouse gives them the opportunity to encompass more seasons. They now grow 11,000 geraniums in the spring and 1,800 mums in the fall, in addition to the trees and shrubs they keep year-round.

They have 11 greenhouses. They use 20,000 gallons of water a day. And they’re the first nursery owners in the state to have directional road signs, similar to the ones that mark wineries, to guide visitors to their 13-acre property.

As you pull in the driveway, you see a 1997 red, Ford pickup. Jim bought it new when the state reissued his license. Seizures took his freedom, but he got it back.

In 2001, Jay came back to help his parents in the family business. “He always swore he’d never work for me,” Judy says. “But he came home one weekend and wanted to know if he could work for me, and I said, ‘Yeah.’ ”

And Jim’s memory’s coming back, too. The plant parts anyway. He still can’t remember his wedding or his son’s birth. “That part of my life is gone,” he says.

For Jim, this third stage of his life isn’t about him anymore. It’s about his 5-month-old granddaughter, Edith Joyce. It’s about his position as president of the Epilepsy Medication Fund, an organization that helps epilepsy sufferers with expenses. It’s about the smiles on customers’ faces as they purchase poinsettias to decorate their homes for Christmas. It’s about giving joy to others.

Leah Hughes is the associate editor of Our State magazine. Her most recent story was “Sweet ’Simmons” (November 2011).