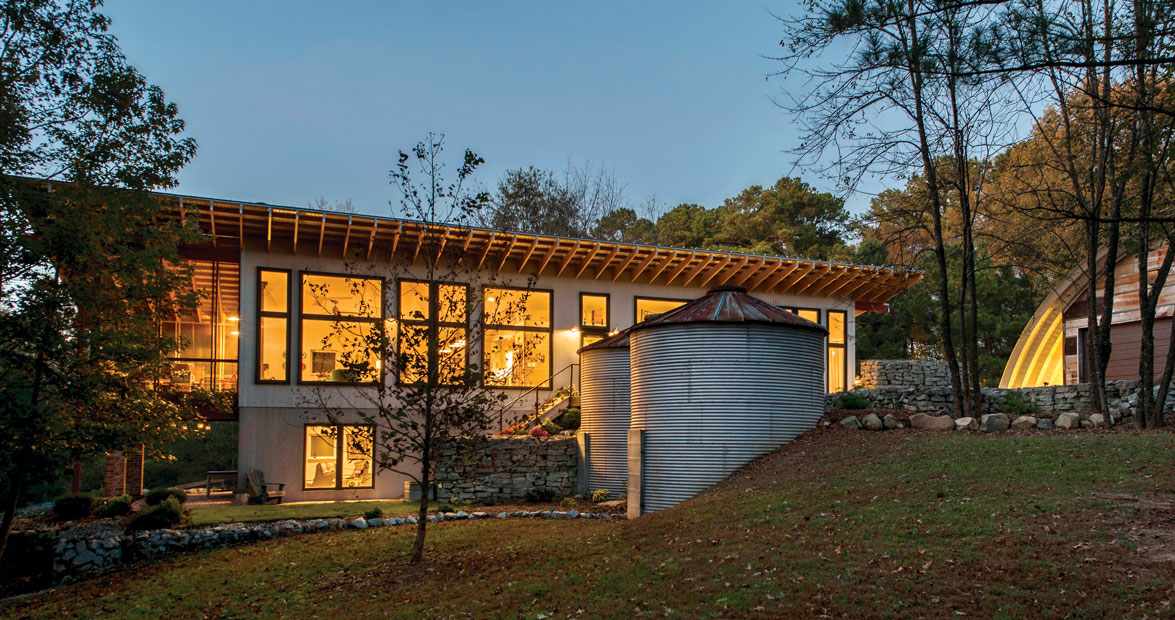 Among Horseshoe Farm’s soft-eared residents, there are two main social cliques. In one, the goats. In the other, the donkey, the horse, a long-horned miniature steer called a zebu, and a smattering of sheep. The dogs and the cat — Quito, Camanoe, Maqui, and McCormick, respectively — have indoor privileges and prefer to remain independent operators. The farm’s benevolent social order can be observed from an upstairs screened-in porch — “one of our favorite rooms,” says architect Randall Lanou, who built the house in 2014 with his wife, Dr. Lori Scappino, a veterinarian. The porch overlooks a well-worn path that the animals use for round-the-clock adventures. “We put a wildlife camera out there, and Lori said that all night long, it kept turning on and catching them walking by, one way or the other,” Randall says with a laugh.

When he and Lori made plans to build a new home on their 20-acre farm in Creedmoor, they weren’t seeking an indoor sanctuary where they could leave their muddy boots at the door and take respite from the messiness of farm life. They wanted the boundary between farm and house to be seamless. “We both spend a lot of time outside and don’t mind the feeling, when we’re inside, of still being connected to the critters on our farm,” Randall says as his elderly dog Maqui leans in for a scratch. A modernist farmhouse would encourage just that kind of indoor-outdoor harmony. They wanted a design that would allow the house “to sit comfortably on the farm,” he says, “to be integrated with the land, rather than in contrast.” 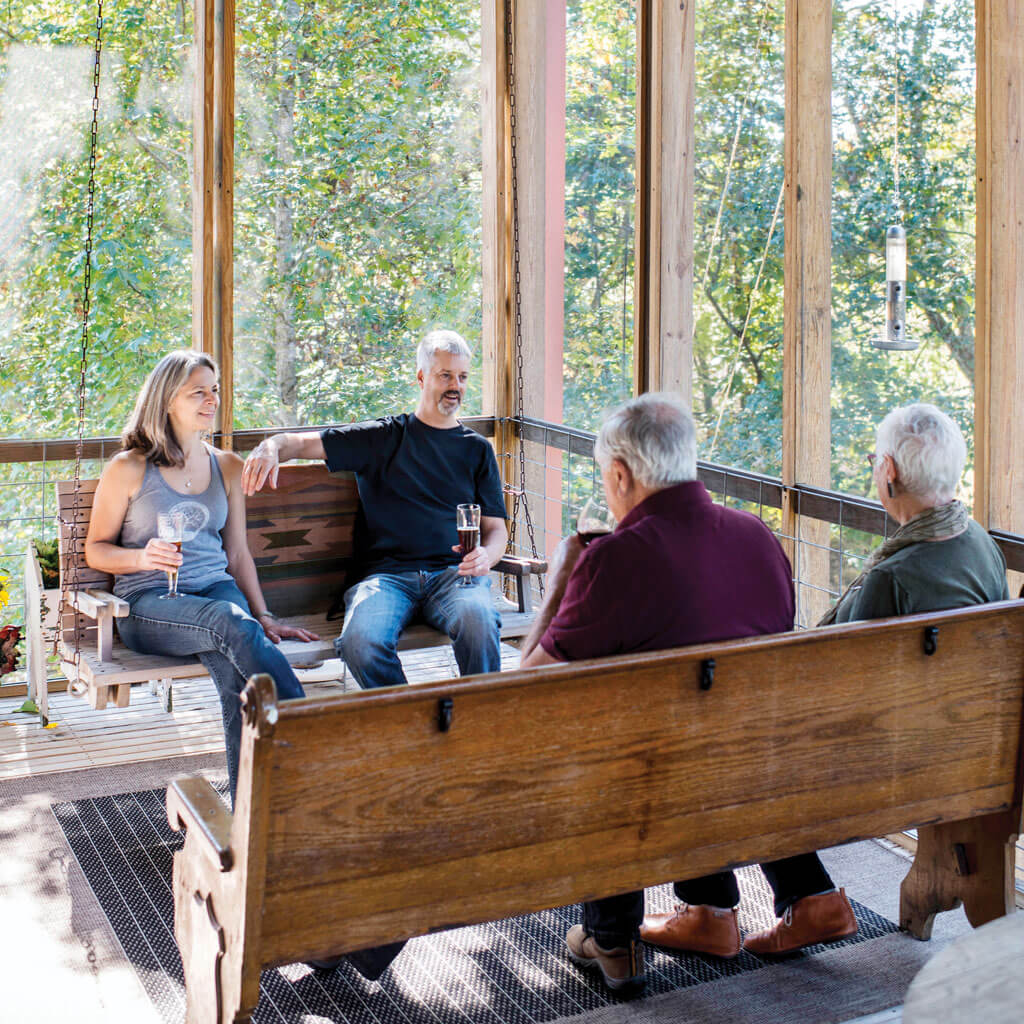 Lori and Randall and his parents, Mel and Barbara Smith, can keep an eye on their critters from the porch. photograph by Lissa Gotwals

To understand the success of Randall’s design, which won a prestigious residential design award in 2017, you have to look past its Pinterest-ready showstoppers, which are impressive: the stunning jagged roofline, the stylish sinks, the golden-hued kitchen counter made from wood reclaimed from the bottom of the Cape Fear River. What makes Horseshoe Farm so inviting and liveable are the more subtle details that incorporate good design into the way that Randall and Lori live.

The south-facing farmhouse has an uncluttered, open floor plan with tall, airy ceilings. Every room on the main floor is essentially connected to the next. Walls offer privacy but don’t always extend to the ceiling. Doors, the few that there are, can be gently closed but don’t lock. There are windows everywhere — enough to remind you that you’re essentially in the back pasture, not far from the hay bales that Randall sets out for the animals. The sun streaks through the windows in the great room, casting sharp geometric lines and providing passive solar warmth. The house is grid-connected but has a well, a septic system, and a photovoltaic array that turns solar power into usable energy. The house earns so many solar renewable energy credits each month that it actually makes more money than it costs to run. “Pretty sweet, when you think about it,” Randall says. “One of our goals when we built this house was never to pay utility bills for the rest of our lives.” 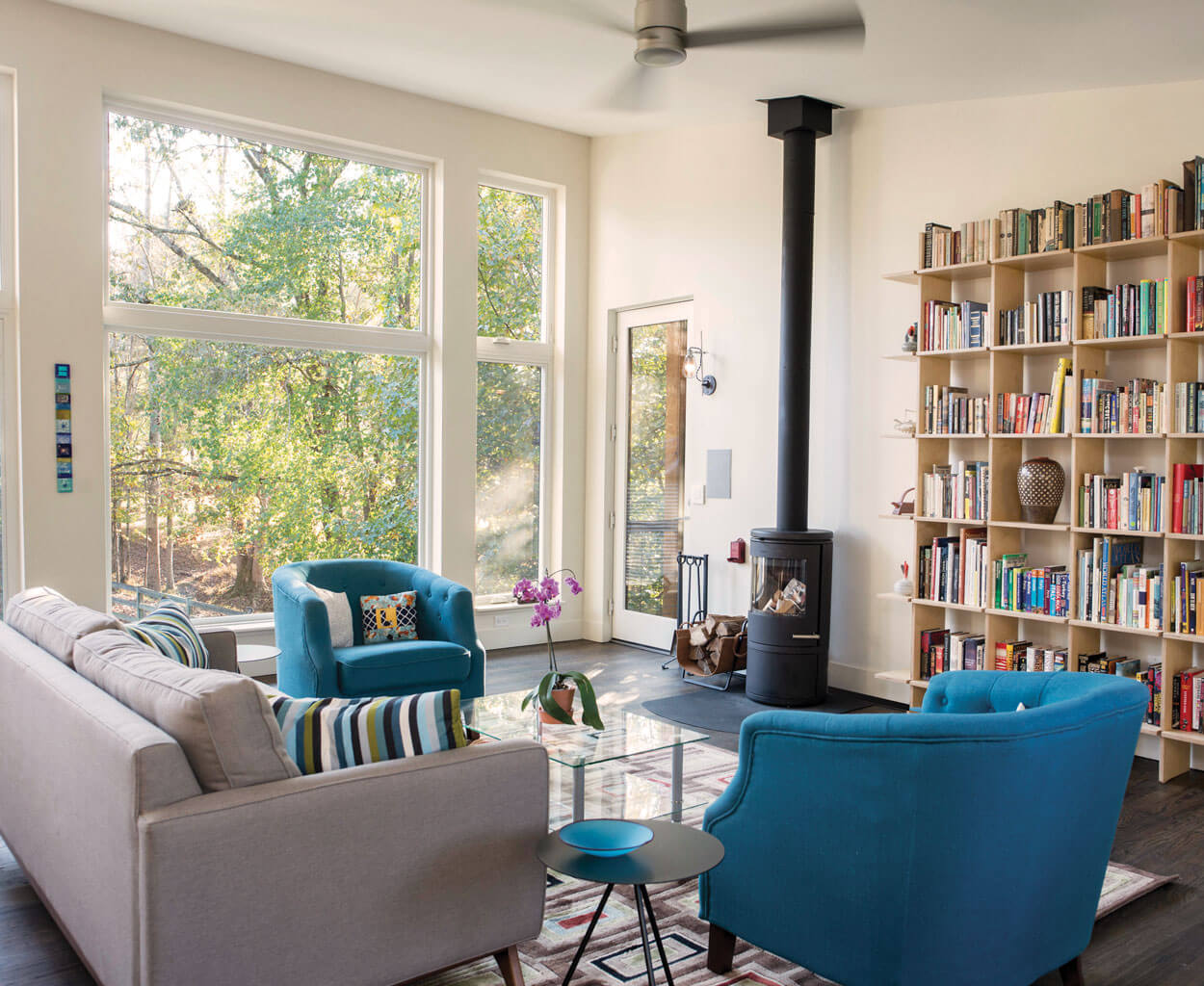 A living room built for reading looks out on the front of the farm. photograph by Lissa Gotwals

The combined living room and kitchen space is for gathering around the wood-burning stove and preparing meals — but it’s not for the toaster. That’s kept around the corner, just out of sight, in a cozy space that the couple affectionately calls the “ugly appliance room.” This clever, multifunctional pantry keeps clutter out of the main living space. Here, they brew coffee, ferment kombucha, and toast, well, toast. “You can buy a really nice toaster oven,” Randall says, “but I don’t think it will ever look good enough to be in your living room.”

Another clever feature is found at the end of the hall: the outdoor shower, where one can lather up under the open sky. Out here, on this vast expanse of land, privacy is not really a concern. With a laugh, Randall adds, “The animals don’t care.” 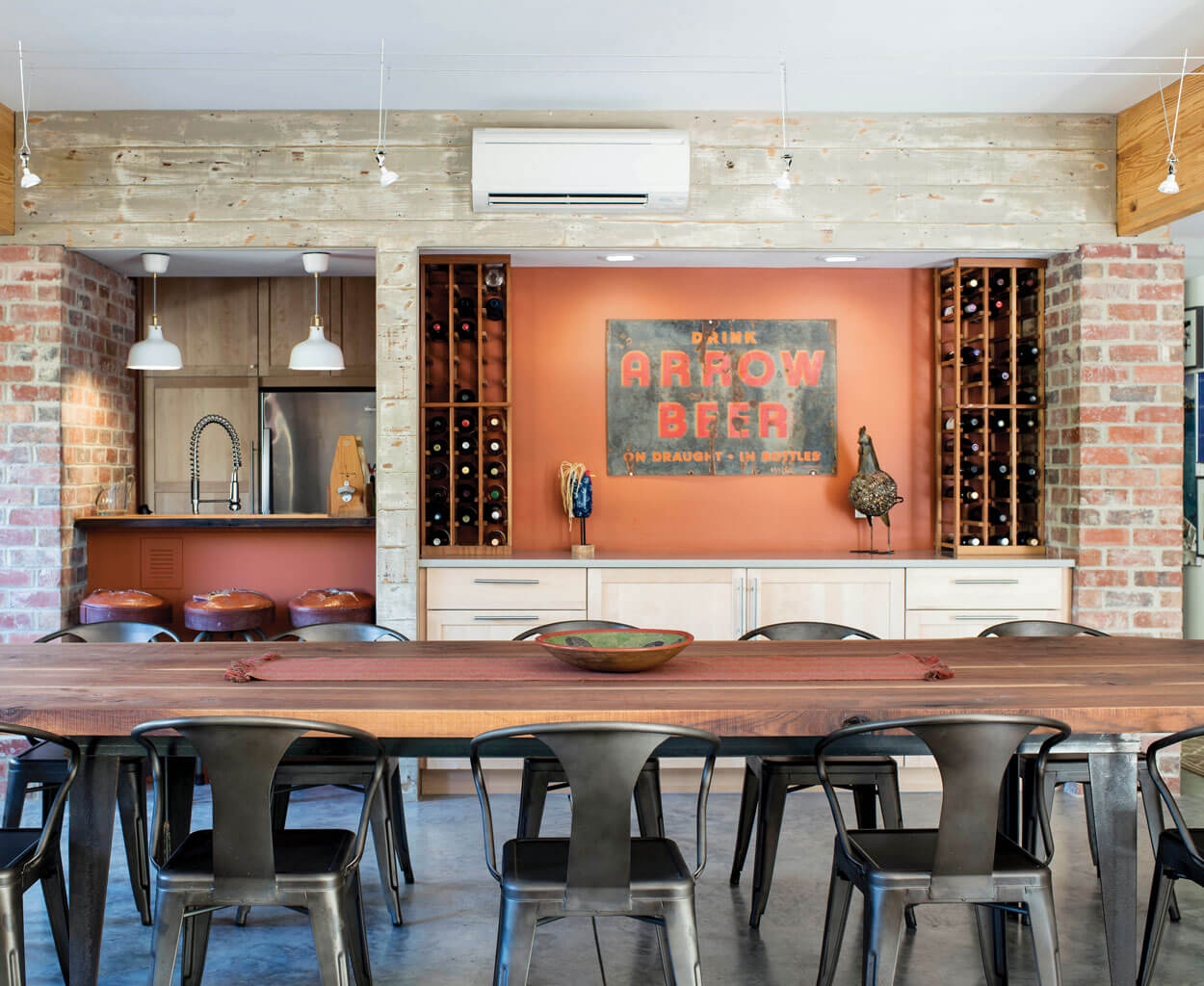 Randall and his father made the black walnut dining table — including the metalwork — in the workshop out back. Randall chose to keep some supporting brick and beams exposed. “It’s part of the beauty,” he says. photograph by Lissa Gotwals

“We don’t mind the feeling, when we’re inside, of still being connected to the critters on our farm.”

The Creedmoor property is a perfect spot for Lori, Randall, and their menagerie. It’s a half-hour from Randall’s architecture firm in Durham and mere minutes from Lori’s veterinary practice in the old post office building in town. Horseshoe Farm fits in well with this rural Piedmont setting. Creedmoor was once considered the largest mule trading center in the world. People called it “Mule Town,” which is how Lori’s veterinary practice, Mule Town Veterinary Hospital, got its name.

Randall grew up not with mules, but with tractors, which he learned to drive during summers on his grandfather’s egg farm in Pennsylvania. His tractor collection is now down to one, a 1950 red Farmall, which he keeps in a corrugated steel Quonset hut, a part barn, part workshop that he built from a prefab kit. 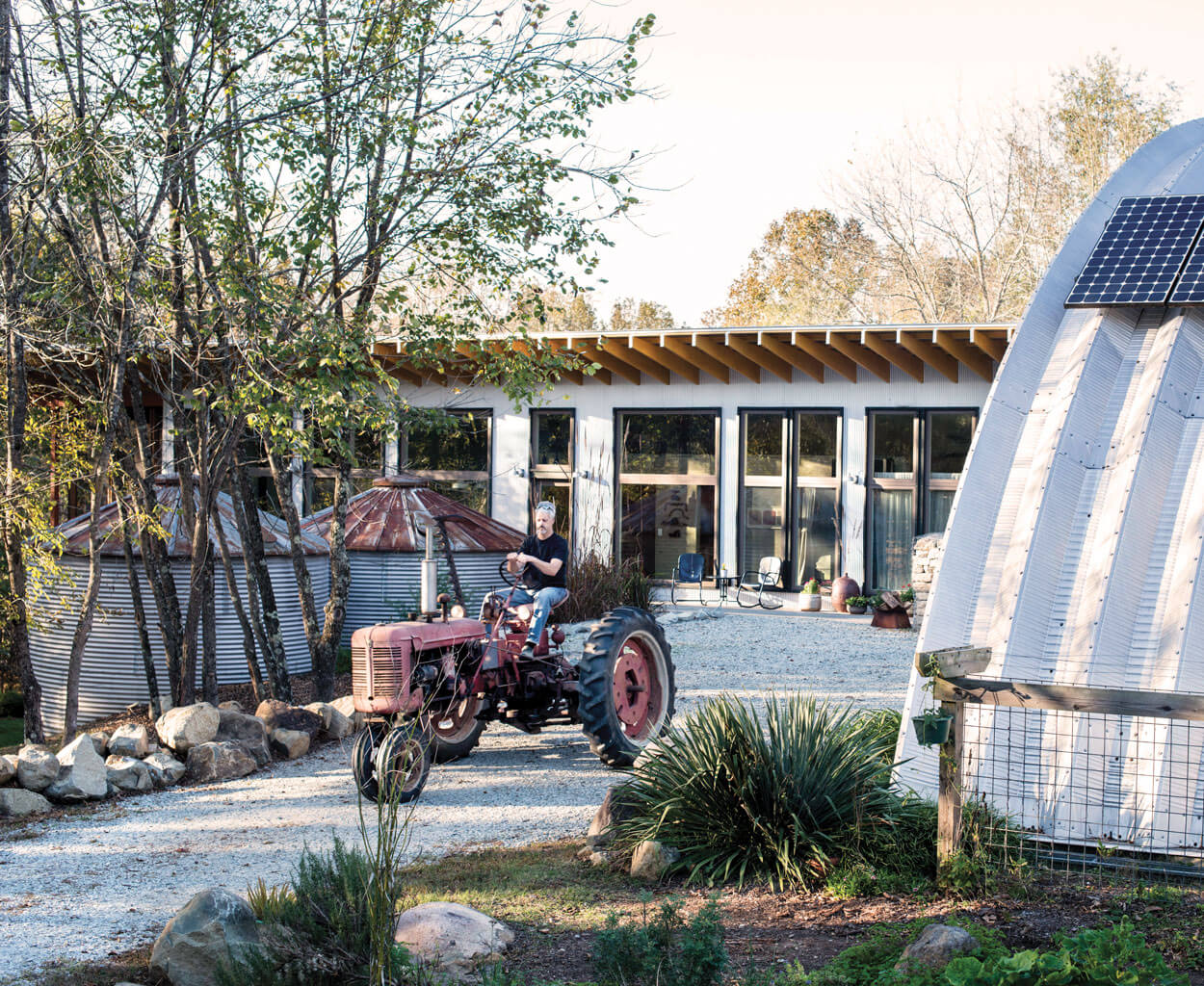 Randall often puts his old tractor to good use. photograph by Lissa Gotwals

Randall likes to work with his hands. He and his dad, Mel Smith, built the massive, 12-foot black walnut table that’s downstairs in the “Thanksgiving Room,” where he and Lori gather with friends and family for festive dinners, game nights, and movie watching. “In some ways, we designed the space around this table,” Randall says, admiring his handiwork, which still shows remnants of candle wax left over from a recent gathering. The wood came from a tree that crashed into the home of one of his wife’s employees during a hurricane.

A few feet from the head of the table is the dog-and-cat door. It swings throughout the day as Quito, Camanoe, Maqui, and McCormick go in and out. Aside from Baja, the African grey parrot, who monitors the farm’s goings-on from his cage by the upstairs window, the animals on the farm are free to roam, whether in cliques or not. (The chickens refuse to be pigeonholed.) In many ways, the farm’s fences, like the walls of the house, are merely suggestions. Room, house, pasture, barn. Each has a purpose but remains connected to the whole.