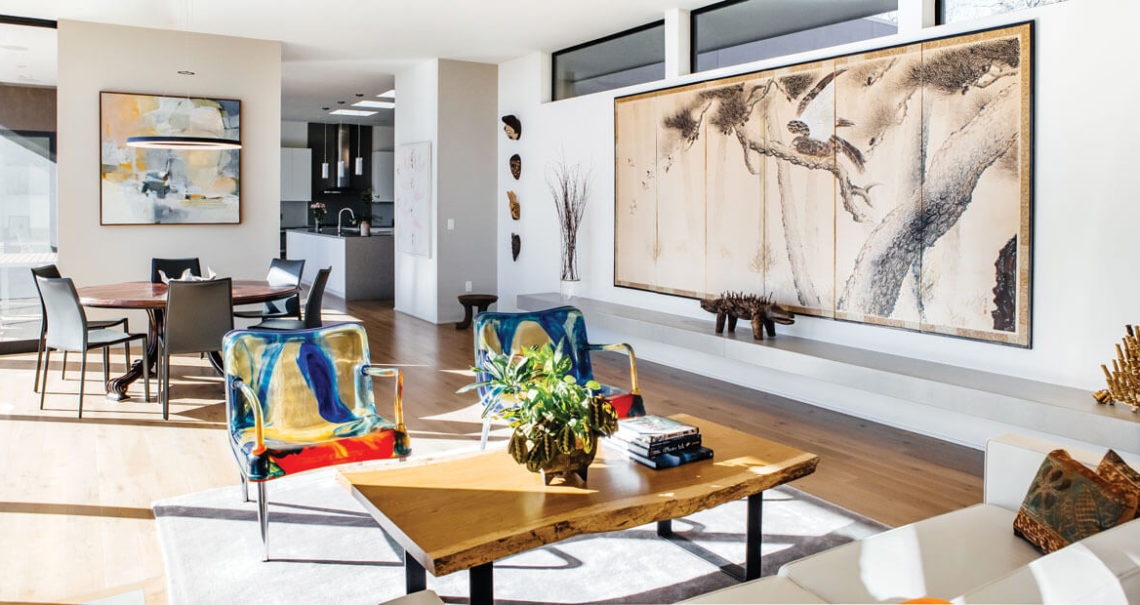 For years, an enormous Chinese screen hung in Eunice Ward and Rosaire Nottage’s law office in downtown Chicago. Now, the artwork fills the north wall of the living room they share on a mountainside in western North Carolina. The delicate painting of a tree echoes the forest landscape framed by floor-to-ceiling windows to the south. On warm days, those windows can be pushed back into hidden pockets behind the fireplace. Inside and outside, past and present, merge in this thoughtfully designed home southeast of Asheville.

As two of Chicago’s fiercest family law attorneys, Ward and Nottage resolved difficult divorces. When the law partners retired from their firm in 2014, they used their skills in managing conflict and finding compromise to form a new household: their own. With Nottage’s husband, Mike Bauer, they have created a home that’s modern in every sense, reflecting the aesthetics of contemporary architecture and the realities of friendship, family, and life’s second act.

“You’ll see our partnership, and our need for privacy, in how the house is designed,” Ward says. She’s standing in the foyer of the 4,000-square-foot home poised just below a ridge on Buncombe County’s Butler Mountain. The primary living space occupies the entry level, designed to be easily navigable as the occupants grow older, with guest quarters below. To the left of the foyer is the suite that belongs to Nottage and her husband, with a bedroom, bathroom, and sitting area. To the right is the space that the household shares, including a kitchen that can accommodate multiple cooks. Beyond that lies Ward’s own suite. 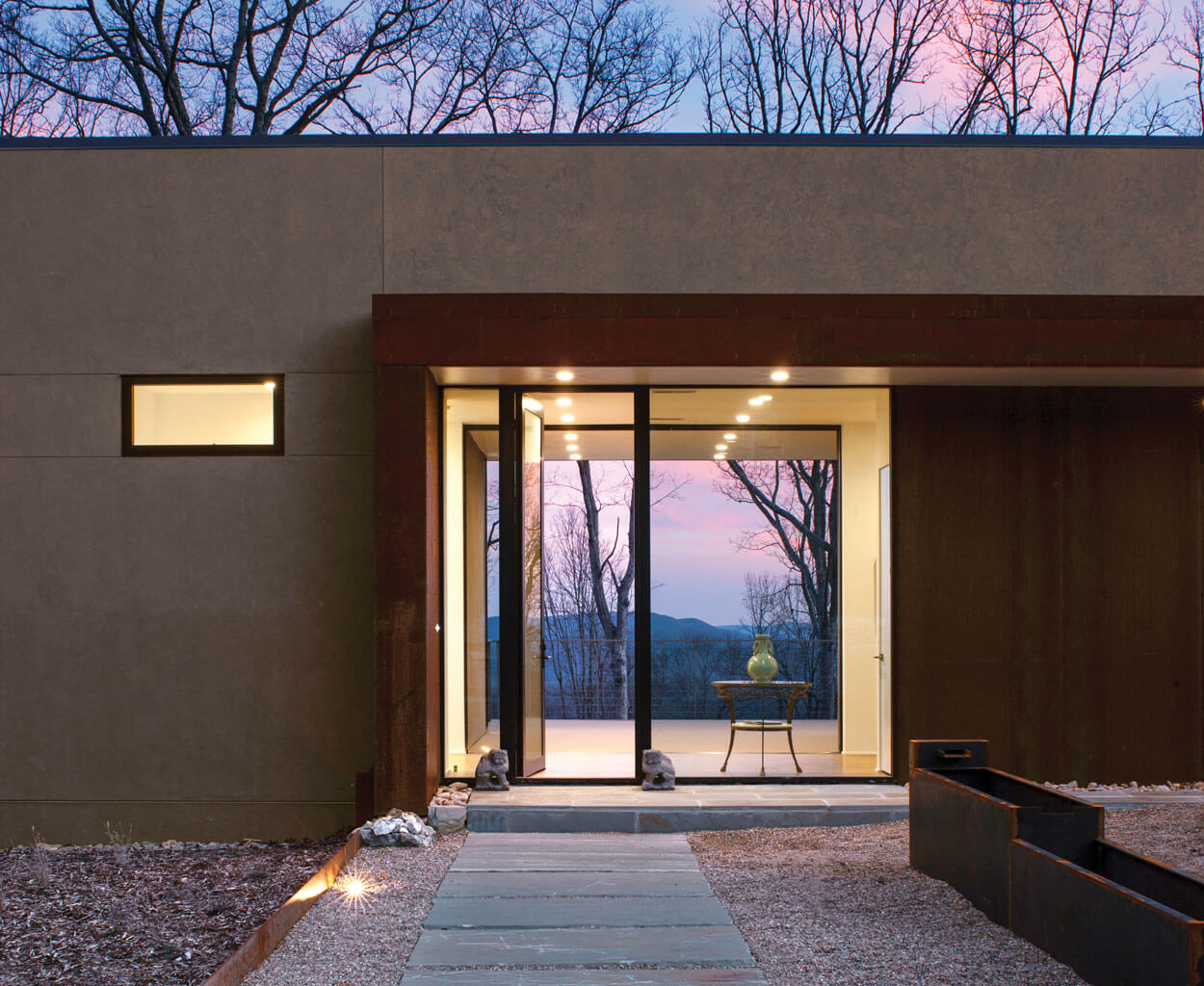 Eunice Ward and married couple Mike Bauer and Rosaire Nottage have their own wings of the house: Ward’s to the right, Nottage and Bauer’s to the left. photograph by Tim Robison

And straight ahead, through the glass that defines the south wall of the house, is a mountain vista that stretches for 20 miles on a clear day. Nothing could be a greater contrast to the homes that the lawyers left behind in Chicago. Ward lived in a downtown loft; Nottage and Bauer raised their family in a remodeled Victorian on the city’s North Side. “Living in this house, living with Rosaire and Mike when I haven’t lived with anyone since college, not being a lawyer anymore — it’s all part of the same big change,” Ward says. The process of collaborating on the house for this new phase of life has helped ease the transition into it.

“We get ‘mountain modern’ requests all the time, but this is a different approach.”

At first, they all imagined separate destinations for their retirement. Nottage, who grew up in New York and New Jersey, wanted to return to the East Coast, although Bauer didn’t want to leave his native Chicago. Ward contemplated California and Arizona. “Those places seemed so far away, though,” she says. She had close relationships with the couple’s children, and she had visited Asheville when their son was enrolled at the University of North Carolina campus there. They all loved the area’s easy access to nature and vibrant arts scene. Gradually, as Ward, Nottage, and Bauer eliminated other options — “not Florida,” they agreed — Asheville became the focus of their real-estate search.

“You say that to a lot of my ideas,” Nottage says, laughing.

The three already shared ownership of a vacation home in Wisconsin, so the suggestion wasn’t the leap that it might be for other households. The real difficulty lay in finding a house in Asheville that met all of their needs and didn’t feel, in Nottage’s words, “too suburban.” Inspired by a New York Times photo of a modern home, they decided to build. They bought a site in the mountains and tapped Asheville-based architects Aaron and Calder Wilson to design. 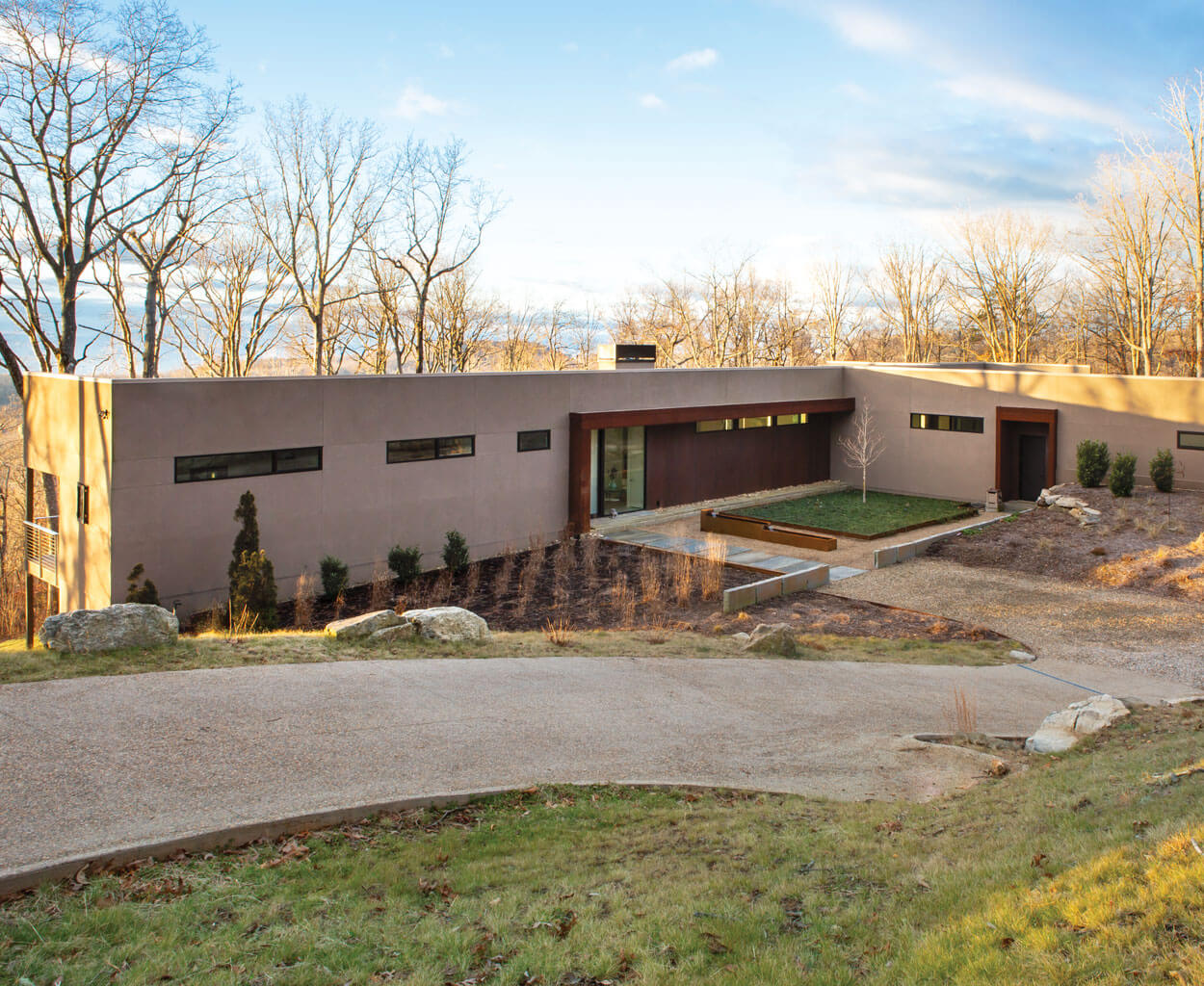 Designed by Asheville architects Aaron and Calder Wilson, the home also includes a lower floor for guests, like grandchildren and friends from Chicago. photograph by Tim Robison

The Wilsons, who met as architecture students at the University of Illinois, have become known for their work on high-profile television projects, including the 2015 HGTV Urban Oasis in West Asheville and the 2018 DIY Network Ultimate Retreat in Sapphire. Back in 2011, though, the young couple had only been in business together for a few years, and they hadn’t yet had a chance to design the kind of modern house they both loved.

“We get ‘mountain modern’ requests all the time, but this is a different approach,” Aaron says. With pitched roofs to handle snowfall and a material palette that emphasizes timber — often taken from the site itself — instead of glass and steel, “mountain modern” homes are popular in the region. But what the Chicagoans wanted was more akin to the modernism that the Wilsons had studied and admired: long, low lines, maximum light, open spaces that function and flow.

The resulting effect may be one of simplicity, but the process of designing and building a modern home can be complex and expensive. With its absence of molding and trim, “modernism doesn’t allow you to cover up your mistakes,” Calder says. Few contractors in the Asheville area had experience in executing a design that required drywall to be hung so precisely. Bauer, who took a great interest in the construction details, explains, “The guy they found, he was an artist of drywall. Man, that took a long time.”

The site, too, offered unique challenges. Aaron searched the property to find a spot where the sloping terrain would accommodate the house’s footprint — about 3,000 square feet on the main floor and about 1,000 square feet on the lower guest level, nestled into the hillside — with minimal grading. A truly flat roof was not ideal, given the wooded location and the need to shed water, so the Wilsons introduced a barely perceptible pitch. And the floor-to-ceiling windows, which, in a desert home, could have met at a perfect, seamless edge, required extra reinforcement to withstand the mountain winds.

Meeting the expectations and needs of three clients was a good challenge, the Wilsons say. “It was great that they all brought something different to the table,” Calder says. “Eunice was really into the modern look, and Mike wanted to be sure that everything would function and be low-maintenance, and Rosaire was often in the middle, which is an important role, too.” 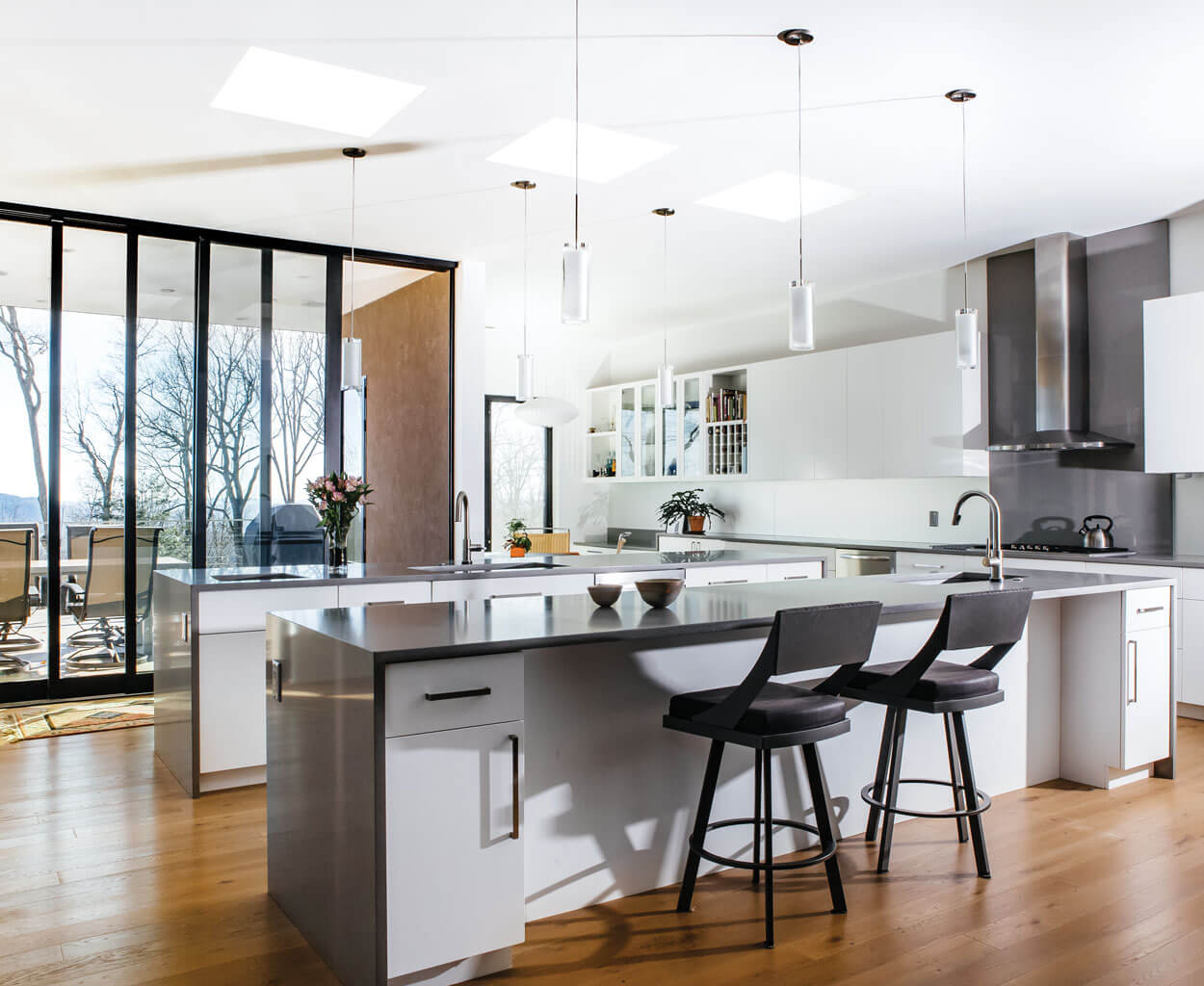 The shared kitchen was designed with countertops, sinks, and storage space for multiple cooks in mind. photograph by Tim Robison

The shared histories and differing sensibilities of the three owners are reflected throughout the house, where they’ve lived together since construction was finished in 2015. A collection of heirloom and thrifted needlepoint samplers that spent years in Nottage and Bauer’s kitchen now hangs in the downstairs guest room. Bauer’s prized collection of antique brass hose nozzles, polished to a gleam, is massed together on a concrete bench, a copy of one designed for Ward’s loft. In this modern context, everything looks like art.

The residents, too, are enjoying the shift in self-perception that comes from a new setting. Bauer misses his favorite Chicago bar, but he’s finding a substitute in Asheville’s music scene. Nottage, who took the El to work every day, is getting used to driving down the mountain into Asheville, and she likes being able to step out her door into nature.

Ward, meanwhile, has become active in the local arts scene, and she’s found a favorite yoga studio. “When you retire, everything is different,” she says. When I meet new people, they say, ‘Oh, don’t you miss the city?’ And I say that you can’t miss it. That was one life. This is another.”