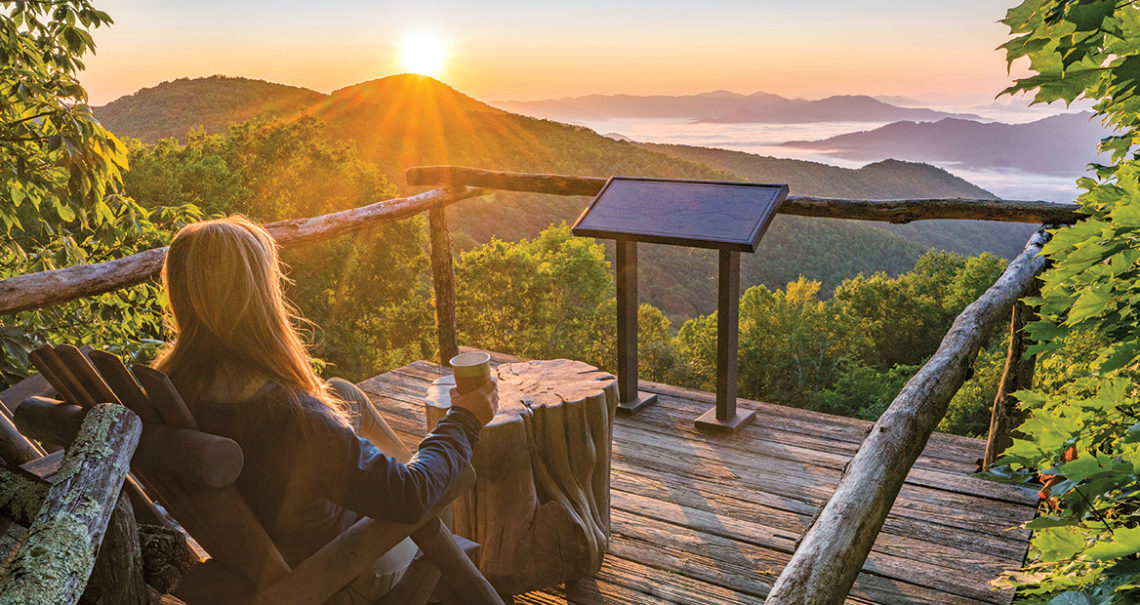 We find our cabin just off a tiny road somewhere between Helton and Grassy Creek, and, like most places we rent, it features a far-too-steep-for-our-minivan gravel drive. My wife, Tita, hates steep driveways. She spends time hating them. I, however, prize isolation and a view, and this means I’m endlessly (or at least seasonally) making promises I only sort of know I can keep, like: Sure, I think we can get the van up there. We’ll put it in low. Don’t look out the window. Everything will be fine.

We white-knuckle up what’s maybe more gully than driveway, and I guess, correctly, at the spot where I need to gun it to make the second steep stretch. We come precariously to rest, hearts hammering, at the top of a hill in a space that probably isn’t going to be enough room to turn around in, and now I’m thinking: How many more times will I have to do that? How many hikes did we say we were planning on? Am I still going to be married at the end of the weekend?

There might be no surer healing ritual in our marriage, though, than unpacking into a rental cabin kitchen. We bring one good knife and a handful of spices from home, but otherwise, we love roughing it. We fake our way through a weekend with no real colander, use and reuse the lone lopsided skillet with its mismatched lid, and look in vain for a wine opener only to make do with a wood screw and some pliers. We chose this cabin for the huge hammock on the front porch, and our two boys are shrieking and flipping in jazzed-out circles out there, and I’m saying that next time, maybe, we’ll rent down on the New River, look for somewhere flat — but it smells like rain and loam and granite up here, and we can see two and three rows of mountains from any window, and both of us know it isn’t true.

Tita makes her peace with this by lining up our cereals and crackers in a cabinet whose plywood door is mostly held on with mismatched screws. I light a fire in the woodstove. We put on a pot of water for the pasta we’re not sure how we’ll drain, and we start opening and closing drawers, hoping for tongs. A proper rental cabin kitchen is delightfully spare, and leaves me, every time, making plans to come home and give half our kitchen stuff away. This cabin only has six forks and no wine glasses, but it’s got a mug with a singing pig in a chef’s hat on it, and that’s more than good enough for me.

We’ll brew coffee the next morning through folded paper towels, and I’ll scorch a pan so badly that I have to scrape it clean with a wad of aluminum foil. Half the burners on the stove won’t work. But both of us truly love to be in a house that’s not our own, everything in the wrong drawers, the plates mismatched, the fridge on its last legs. By the end, we’ll know where the can opener is, and that the only spatula has half a handle. That’s the joy of it, the beauty of these ramshackle cabins. For a weekend, anyway, you find that all you need is a few jelly jars — and each other.

Our last morning, we wake up early to catch the sunrise. I’m sorry again about the driveway, I say. I know it’s scary.

We made it, Tita says. Don’t worry about it. She laughs, even, and says, We’re still here.