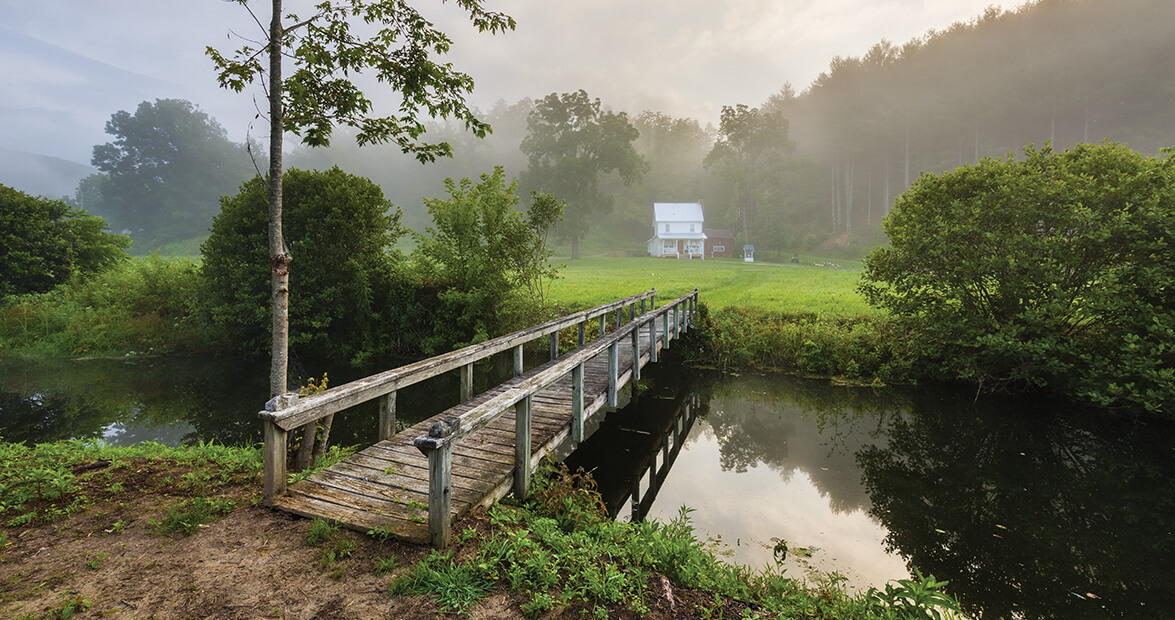 Somewhere under the Sheetrock and siding lay a historical treasure. Ted Alexander, of Preservation North Carolina, knew it. He knew that William Morrison Sr. had settled in the Cowee area of Macon County and, in 1832, built a log cabin with a half-story loft.

It had, incredibly, survived the Civil War, neglect, and plain old rot. The cabin was the oldest standing structure in northern Macon County. It was worth saving.

You want a log cabin? A home with the rustic coziness of wooden, chinked walls, a contemporary, romantic version of the beloved icons of the North Carolina mountains? Dozens of construction firms will build one for you, with every modern convenience. Log houses are all the rage. But how about those people who believe a failing, elderly log cabin is vitally important to preserving our state’s architectural culture? How about the people who long to live in — and usually restore — a building that has the history and the character of generations of living? Let’s not call them fanatics. Let’s call them connoisseurs of fine craftsmanship. 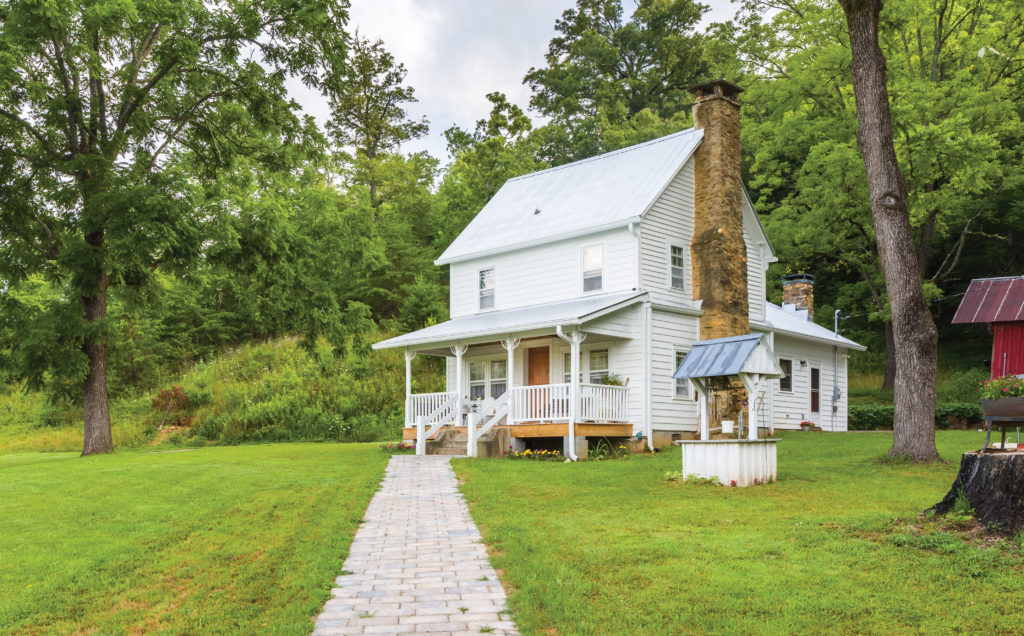 What logs beneath: Inside a sheath of siding is the structure of the original cabin, updated to be livable for a new era. photograph by John MacLean

First, understand that the Morrison House was a bona fide log cabin. A log “house” implies something larger than one room. The 20-foot-by-20-foot “pen,” or room, is enclosed by hewn logs from virgin oak and poplar trees available on the 133 acres of Morrison’s farm situated near Lakey Creek. The cabin sat on corner “piers” made of fieldstone, from which the single chimney was also created. The logs are half-dovetailed at the corners, so each fits into the V notched at its end, an elaborate but common building practice brought to this country by the Germans. Spaces between the stacked logs were “chinked” with daub, made of mud and clay, and where the gaps were more evident, smaller flat stones or strips of wood were included with the chinking. There was probably a shed roof and a plank (or maybe dirt) floor and a front porch that stretched the length of the house.

“Probably,” because those features had disappeared. Like people everywhere, as Morrison improved himself, he improved his home. Sometime after 1880, the logs were covered with clapboard; a second story, two tall chimneys, and windows were added. 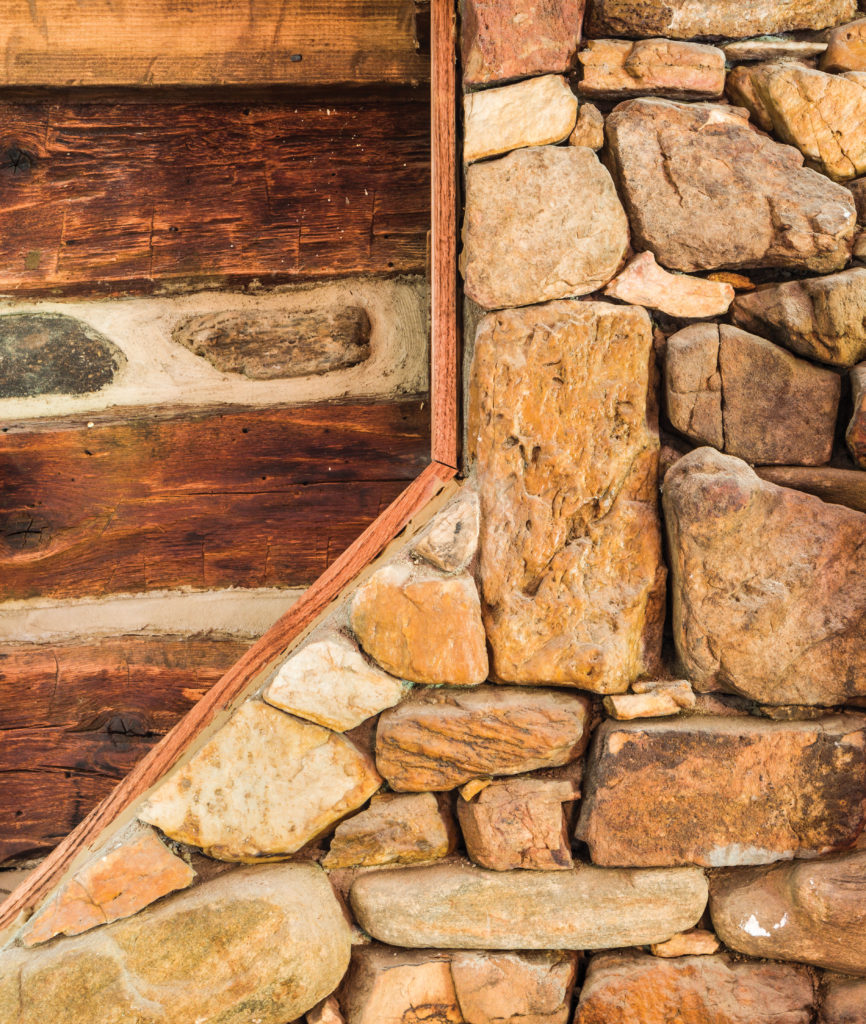 This stone fireplace, and the log cabin walls, are original. Two more chimneys were added to the house later in its life. photograph by John MacLean

What was a log cabin became a farmhouse. And a status symbol: We are big landowners and prosperous farmers! And we’re shedding our frontier identity and joining the ranks of the rural gentry! Still, the original interior logs were left exposed. In preservation, every detail is a gift.

But the house was empty, had suffered a fire, and was in a dreadful state of deterioration. 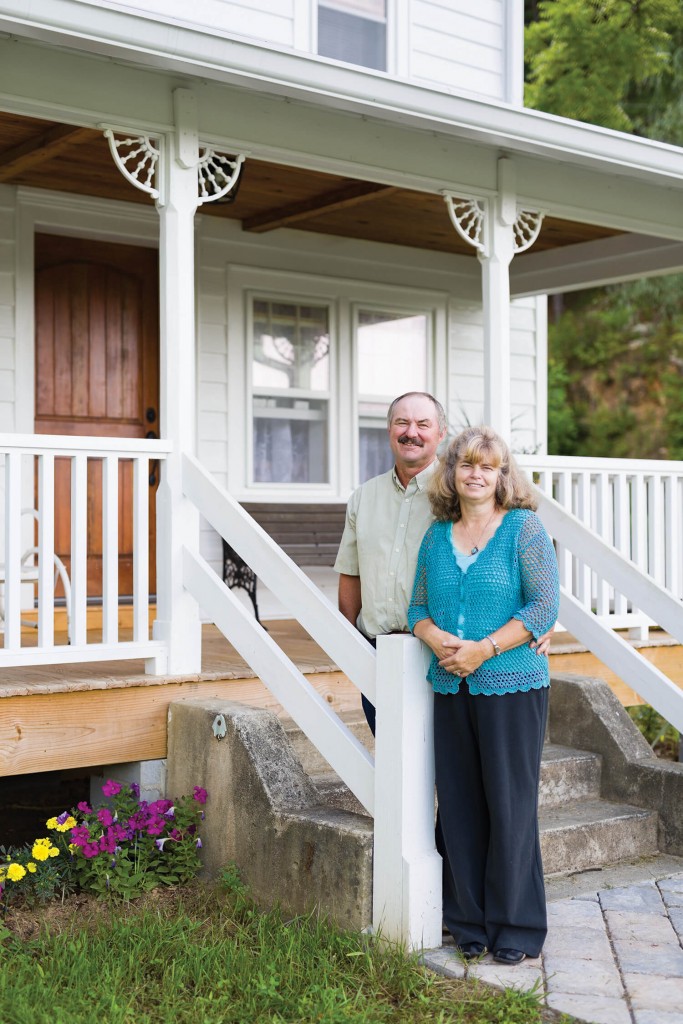 Jackie and Cindy Gregory are the owners. photograph by John MacLean

Enter saviors and savers Cindy and Jackie Gregory of Franklin, who had searched as far as Kentucky to find the farm they wanted, and then, in 2012, found it in their own backyard. Cindy grew up on a farm, and “loves, loves, loves” old homes. “The older a home, the more character it has,” she says. Jackie is in the building business, and had rebuilt old houses before, so as a contractor, he knew what he was doing, what he was looking for, and what he was finding, and saving.

Because, wherever he could, Jackie refitted or reused materials from the old house for the restored version. Trim around every door and window came from wood already present in the older house. (In its evolution from log cabin to clapboard farmhouse, the structure likely underwent three “periods,” in architecture-speak, of construction: the 1830s, 1880 to 1910, and 1920 to 1940.) The five downstairs windows are in their original positions, with original — and permanently wavy — glass panes from the 1870s. The front porch is new, but constructed faithfully to what it would have looked like, and its ceiling is the original unpainted beadboard and gingerbread trim from what Cindy affectionately calls “Granny’s room,” which was upstairs.

The fieldstone chimney, clearly made taller in the middle period, commands the Gregory kitchen exactly as it did for the Morrison family. Two other fireplaces — and their chimneys — followed. One used to stand in the yard, before it was enveloped by the addition to the house that now includes the kitchen. With stones from the other chimney, Jackie constructed a retaining wall in the backyard, which, in summer months, runner beans tumble over so that Cindy doesn’t have to break her aching back to pick them. “She’ll fill every one of them,” Jackie says proudly of Mason jars lining shelf after shelf in another original outbuilding. 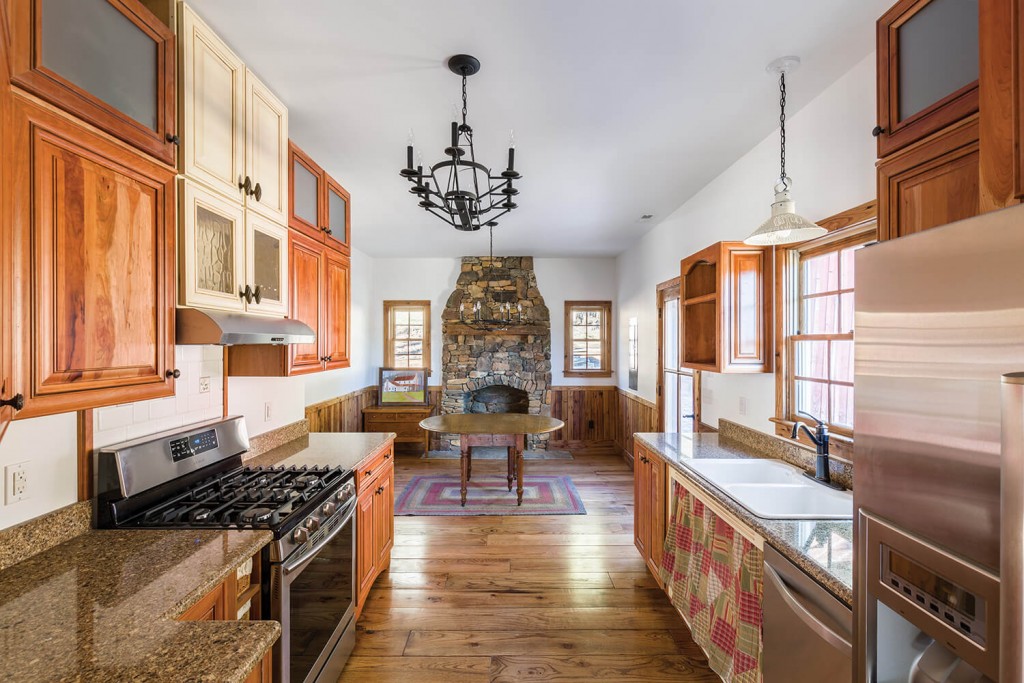 A modern kitchen (above) added on to a 183-year-old house. photograph by John MacLean

Preservation North Carolina, in the human form of Ted Alexander, understands compromise. People are drawn to old houses, but not to the privations that lifestyle necessitated. A modern kitchen, bathroom, and bedroom have been added to Mr. Morrison’s cabin. For comfort, it’s been insulated and covered with two-by-fours. “We really built two houses,” Cindy says. “This is a house wrapped in a house.” 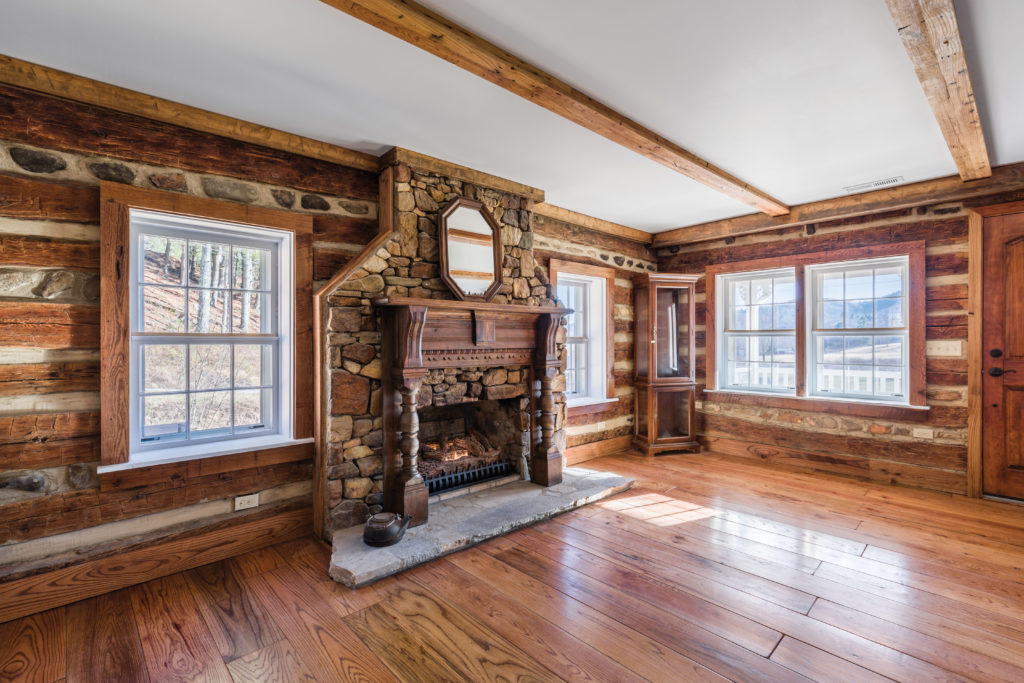 Nothing wasted: The trim around the windows and doors was wood once used in other parts of the cabin. photograph by John MacLean

Still, the Gregorys use gravity-fed water; their source is a spring high on the hillside behind the cabin. And if you stand within the original room, you’ll see the four walls that look as they did in the 1830s, with stones and longer slats of wood — found in the house — shoring up the chinking. The ceiling is low, and what might have felt cramped to our forebears feels cozy and contained. Spacious, even. Good thing, as “cattle roamed around in here, too,” Ted says. 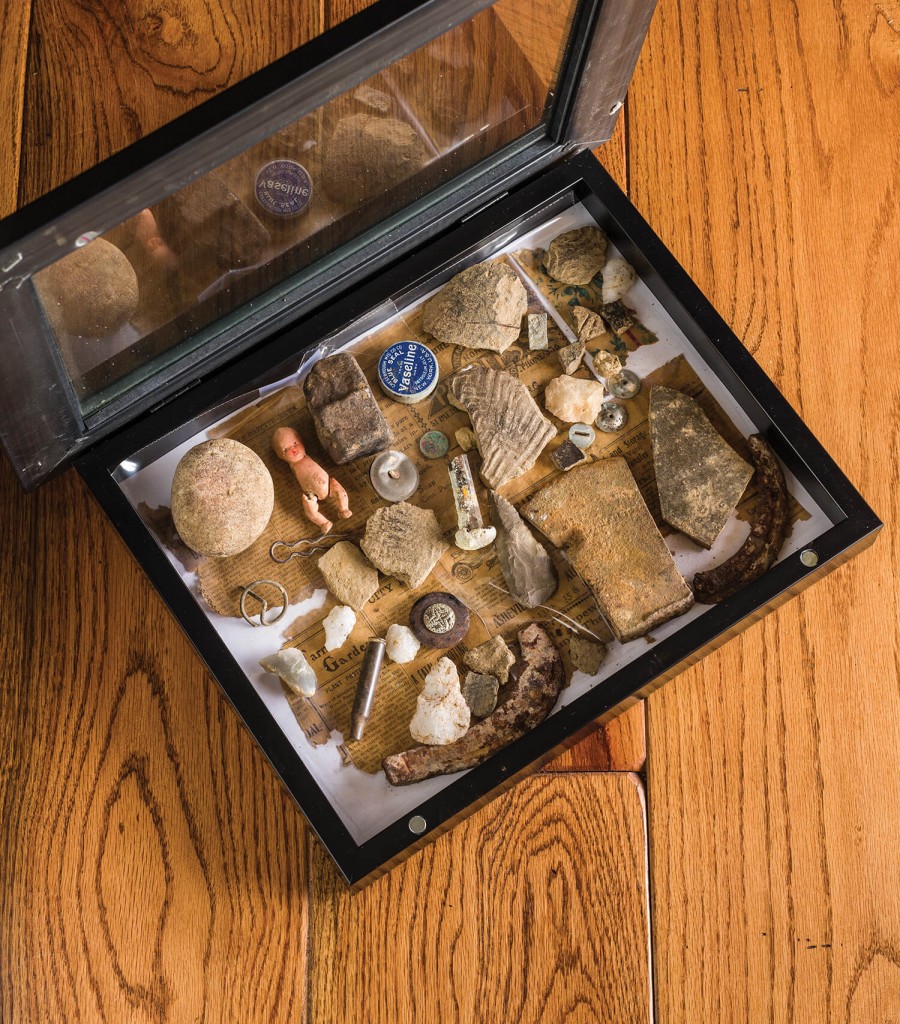 A box of totems from owners past reveals a doll, a bullet casing, and an ax head. photograph by John MacLean

Cindy keeps a box full of objects she found, quite literally, inside the walls. As books fall behind beds, and coins settle in sofas, the inhabitants of the cabin lost tools and toys through the years. Here are the expected arrowheads — the property is quite close to a Cherokee Indian mound, a preserved property of great cultural importance to the Cherokee nation — and broken limbs from a tiny doll. Here is a deliberately notched ax head, for yanking barbed wire. Here are hairpins and buttons, too, all speaking for the souls who once built and repaired, grew, and canned, in this very space. Just as Cindy and Jackie do.

Preservation is collaboration. A couple who wanted to live in the Morrison House found a man who wanted to save it. And thus, a simple log cabin in Macon County became a win-win for everyone.