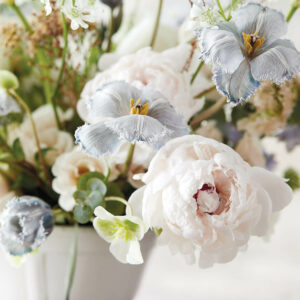 Pick up a beautiful bouquet from the mother-daughter team at Golden Thistle Design. photograph by Stacey Van Berkel

Having spent time in flower-filled Greek Orthodox churches and in a garden that she planted with sweet alyssum in third grade, Hannah Hunt knows her blossoms. When an event planner convinced her to open Golden Thistle Design, a wedding floral business, Hannah asked her daughter Erin to assist by “counting candlesticks” until, “by osmosis,” Erin learned that “hand me that pink flower” meant a peony, Hannah says. Four years later, this mother-daughter team fashions lush, loose floral creations for couples who choose to marry in the North Carolina mountains. The duo’s current looks feature dusty hues of caramel, mauve, cream, and blush. But mother and daughter best look alive: Erin’s daughter Emma could wire an orchid at age 3. Now 5, “she has very expensive tastes,” Hannah says, and prefers anthurium for her bouquets. — Susan Stafford Kelly 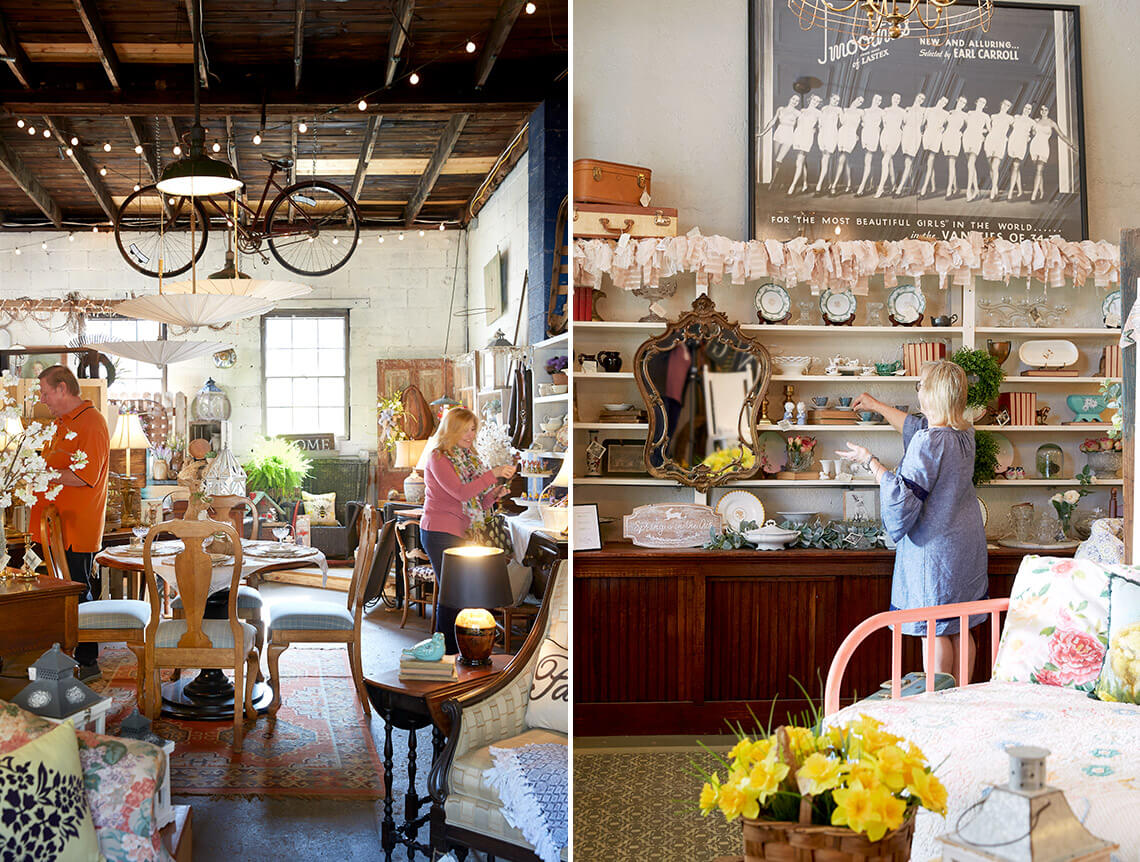 Vintage-style chandeliers light the way for Lindsay Russell and her mother, Deborah Dehart. As they walk down the aisles of their Alamance County store, Rugged Renewal Antiques, Russell is right on her mother’s heels, just like she was as a little girl, when the pair went antiquing together.

Hunting for old treasures has always been Russell and Dehart’s favorite way to spend time together. In 2017, when they found a decades-old Esso gas station that once served drivers traveling on NC Highway 87 South in Graham, they decided to start their own antiques shop. The station was full of potential — the original doors, signs, and windows were all intact. From stencil-painting the gray-and-white floors of the store to transforming the adjacent garage into a welcoming space where people could shop for vintage furniture, home decor, soap, and jewelry made by Dehart’s daughter-in-law, the renovation of the 1,200-square-foot structure was what they both expected: a lot of greasy hard work. Renovating the shop and running it together has taught the duo a lot about each other, Russell says. “There’s nothing better than working with someone you love.” — Tamiya Anderson 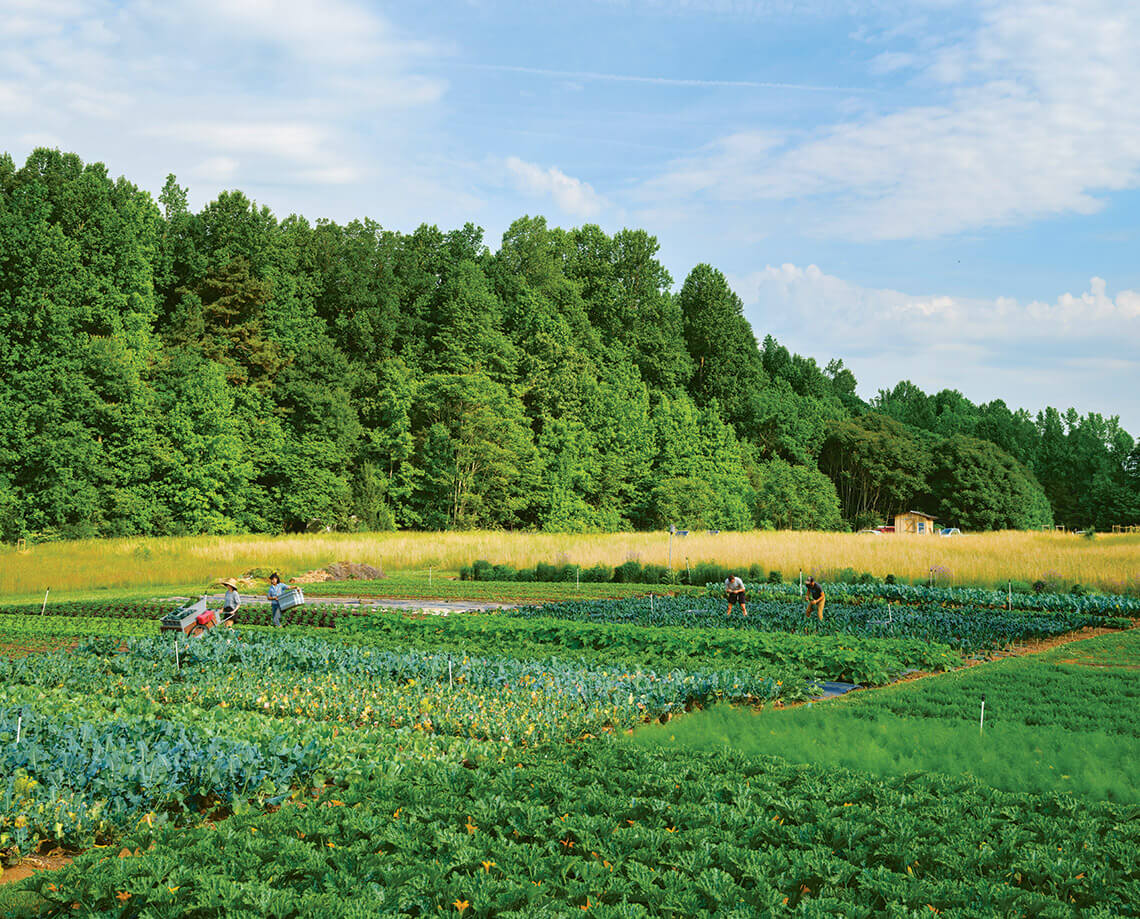 More than 50 types of vegetables are grown annually at Ten Mothers Farm, including summer squash, broccoli, and kale.  photograph by Andrew Kornylak

The busiest spot on Ten Mothers Farm has to be the habitat garden. The 600-square-foot hedgerow of joe-pye weed, elderberry, and mountain mint, among other native plants sown to attract pollinators, absolutely hums with life — brilliant bluebirds, muted yellow wasps, and beetles of every description. It’s a wild reminder of the ethos that animates the farm, which was founded in Orange County six years ago by Vera Fabian and Gordon Jenkins to feed people while maintaining some measure of environmental harmony. 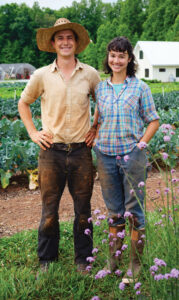 “We aspire to make the farm a thriving ecosystem,” says Fabian, who spent years training for the effort with Jenkins. They met while she was working at a green schoolyard and he at a farm-to-table restaurant. Together, they apprenticed at eco-minded farms in California, Maine, and North Carolina. Today, Ten Mothers employs six year-round, living-wage farmers in Cedar Grove in an intensive multicrop, minimal-till operation that feeds 240 families via a CSA. Its moniker borrows from an old, possibly apocryphal saying from India, that “garlic is as good as 10 mothers” if you’re feeling under the weather. “The idea is that food is medicine, nourishment, and comfort,” Fabian says.

As she, Jenkins, and their team hurry about the farm’s grand hoop house, preparing boxes for the afternoon’s CSA deliveries to Durham, Chapel Hill, and Hillsborough, the pair are grateful for their farm’s growth — and their family’s growth. This year, the couple welcomed their first child, Cal.

“This farm has felt like our child,” says Fabian, who wonders if the patience, adaptability, and endurance that the farm has taught them will translate to the task of child-rearing. “Hopefully, it will also be a fun place to grow up.” — Aaron Reuben 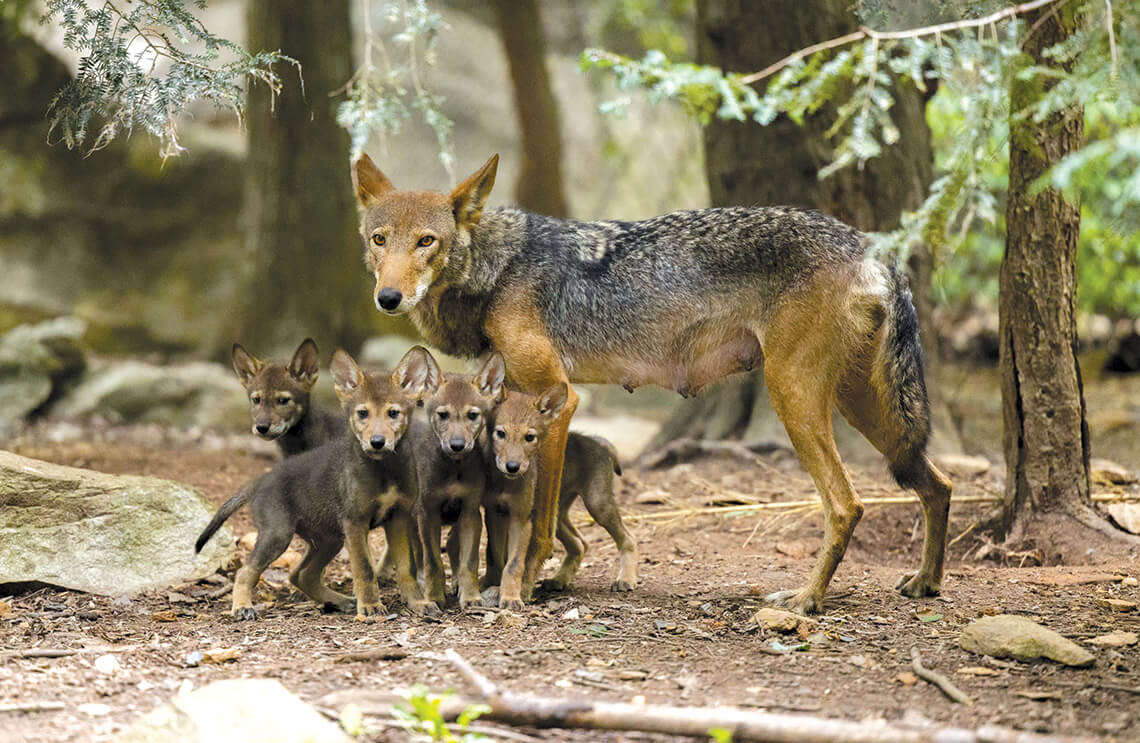 Sassafras and her pups
Red Wolves

Eno and Harper, two of the North Carolina Zoo’s 32 red wolves, often put on a show for their mom, Sassafras. The siblings wrestle and tumble through their enclosure, jumping over boulders and pine branches. Although they look as big as their mother, Eno and Harper were born in April 2021. The pups, now juveniles, are part of a litter of six — two males and four females. Through a poll, fans voted to name the remaining pups Warrior, Fisher, Pearl, and Catawba. Red wolf packs usually consist of a lifelong mated pair and a few of their pups. Family units remain close, and Sassafras’s litter is no exception: Mom stays busy teaching her pups how to stalk their littermate and establish their own territories. 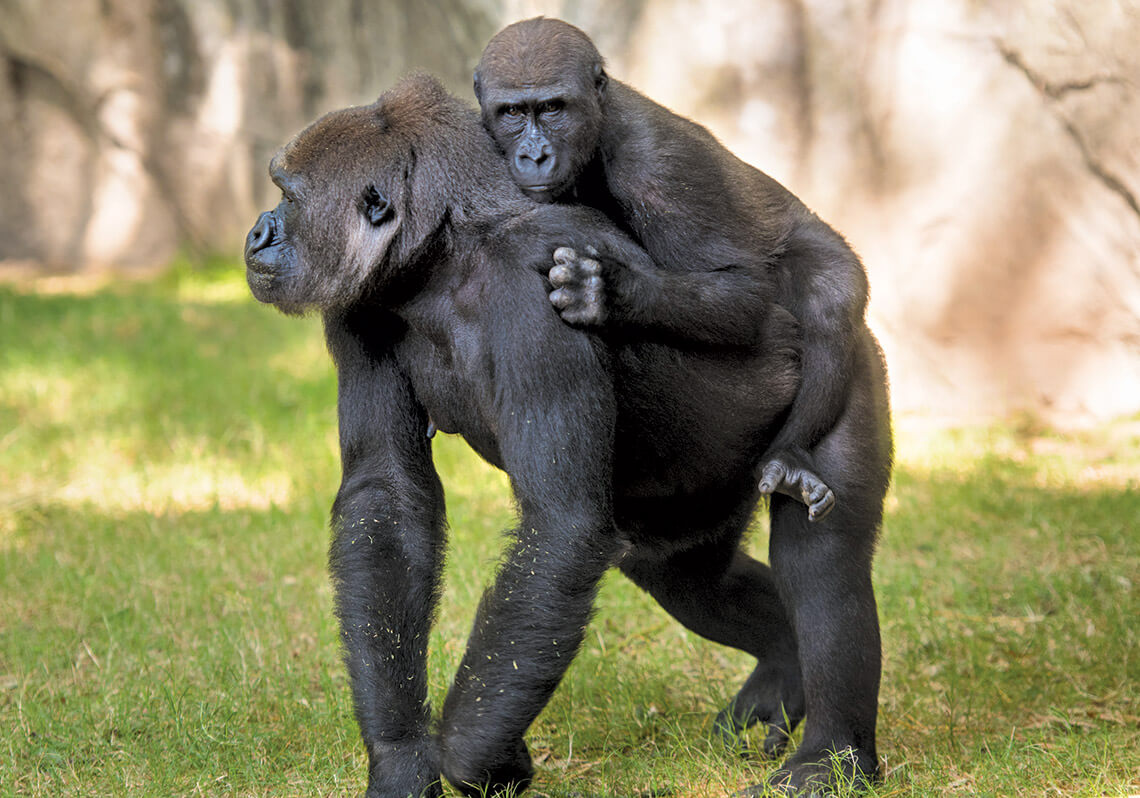 During their daily morning rounds at the Forest Glade habitat, zookeepers usually find 10-year-old Bomassa snuggling with his mother, Jamani — both western lowland gorillas. Jamani was born and raised in California and is still a beach girl at heart. On chilly mornings, she can be found curled beside a heater with her son, who has a reputation as the troop clown, always playing or goofing off. Meanwhile, Bomassa’s half-brother Apollo watches as his mother, Olympia, works a food puzzle. Even though Bomassa and Apollo are young adults, they still curl up with their mothers — a heartwarming reminder that no matter the species, everyone needs their mom. 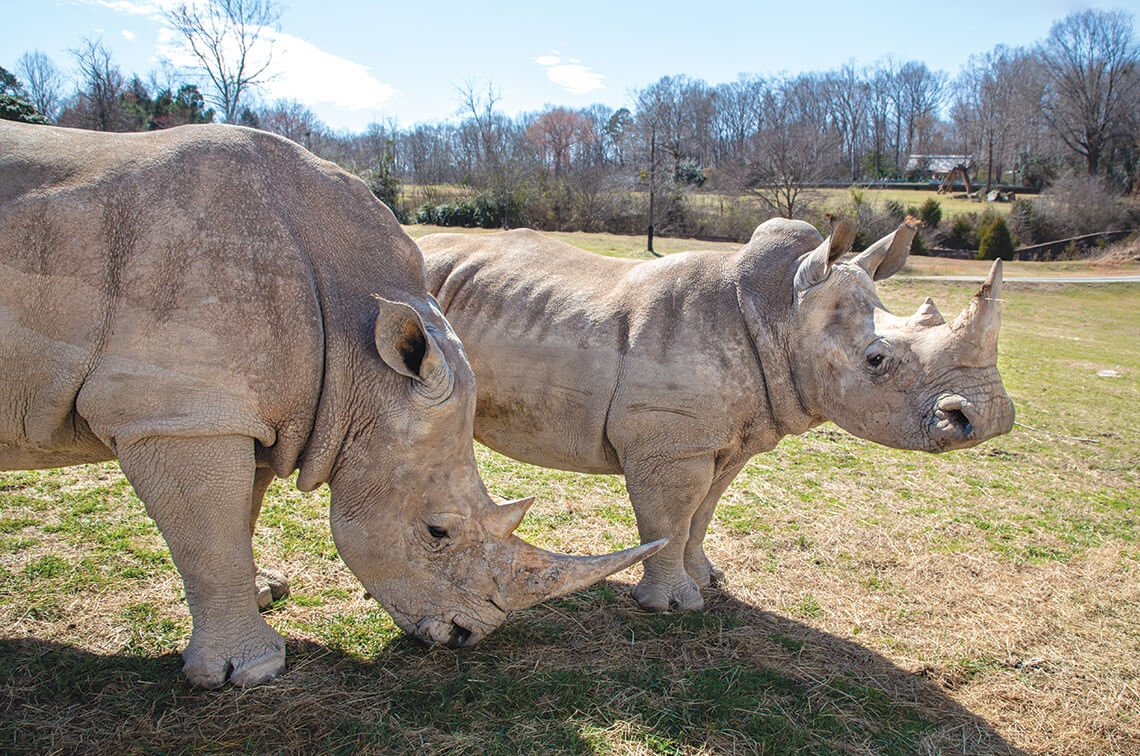 Like most mothers and daughters, Linda and 2-year-old Jojo bond by wallowing in the mud and scratching their backs on low-hanging tree branches. Well, maybe like most mother-and-daughter rhinoceroses. Linda is the herd matriarch — the most dominant rhino at the NC Zoo — but that doesn’t stop Jojo from thrusting her still-stubby horn in the air and mock-charging her mama. Jojo is the youngest of four female southern white rhinos born at the zoo in the span of just a few years, and she has accepted her role as rhino royalty with as much grace as a 2,400-pound animal can manage. After playtime, the pair head toward the gate of their 40-acre reserve, where a caretaker arrives with a mid-morning snack and a bristled brush. Since Jojo and Linda were both raised in human care, belly rubs from the zookeepers make for the perfect mother-daughter massage session. — Rachel Malmin 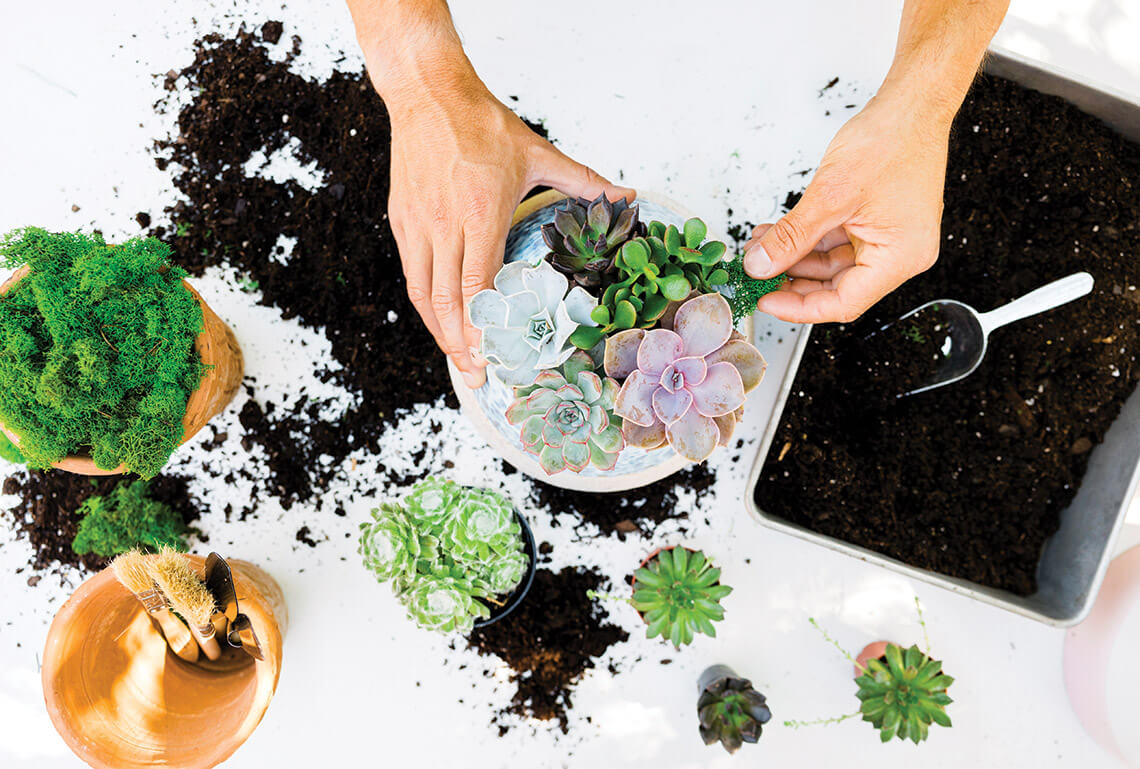 Brandon McKeown tucks a jade plant among Echeveria succulents in a ceramic pot to create a colorful arrangement. photograph by Matt Ray Photography

Every Mother’s Day growing up, Brandon McKeown and his mom would go to their local garden center. They’d pick their favorite plants and spend the afternoon in their backyard, giving their leafy companions a new home. Today, as the cofounder of The Coastal Succulent, a popular Wilmington-based plant design business, McKeown and cofounder Thurston Pope spend their days arranging intricate living displays, dreaming up succulent installations, and hosting private potting workshops for plant lovers who want to create their own arrangements. To celebrate mom this year, request a private potting workshop. “Getting your hands dirty together and creating something cool is such a fun experience,” McKeown says. That’s what their workshops and designs are about — creating something beautiful to be shared.

Below, McKeown and Pope share their tips and tricks for a memorable Mother’s Day, with succulent suggestions and floral ideas for every kind of mom — green thumb or not. 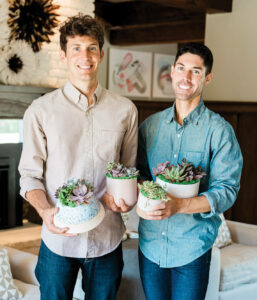 How did you celebrate Mother’s Day when you were a kid?

McKeown: Growing up, our tradition was to always go to the nursery down the street. My mom would pick out a ton of stuff, and then we’d go home and she, my dad, and I would hang out in the backyard and plant everything.

Succulents have become so popular in recent years— and make great gifts. Do you have certain varieties of succulents you would recommend for moms?

McKeown: My mom likes funky stuff, so for the funkier moms I would recommend zebra plants or living stones — they are kind of a weird-looking style, but I know she would love those.

Pope: The first one that comes to mind for me is a super fun trailing succulent called String of Pearls. They just looked like little green pearls on a string. Those are really pretty. Donkey tail is another trailing type — very elegant. The Hoya cactus is a little heart-shaped plant that’s technically a cactus. Then you’ve got your colorful purples and pinks, like Perle von Nurnberg. Any type of rosette-shaped succulent that’s pink and purple. There are so many varieties that I love for different reasons.

If someone has no idea what to get their mom for Mother’s Day, what would you suggest?

McKeown: Go to one of our potting workshops. Or spend the day together and go to a nursery or a plant shop and help her pick out something beautiful. Then go home and spend time with her planting it and coming up with an arrangement. We’d be happy if you looked at our Instagram and saw something and tried to recreate it with your mom. Getting your hands dirty together and creating something cool is just a fun experience, so I think it’d be an awesome Mother’s Day activity. — Katie Kane

Mothers and Strangers: Essays on Motherhood from the New South 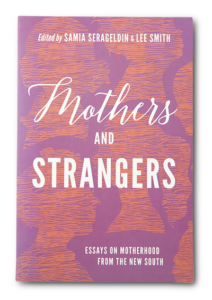 Many of us think we know our mothers, but how well do we really know the women who brought us into the world? In this brilliant and thought-provoking collection of essays compiled by Samia Serageldin and Lee Smith, 28 writers challenged themselves to discover who their mothers truly were — not only as parents but also as people and products of their time and circumstances.

The idea for this collection was born during a lunch between Serageldin, Smith, and contributor Margaret Rich shortly after the deaths of Serageldin’s and Rich’s mothers, one a “powerful and aristocratic Egyptian mother” and the other a “strong-willed Southern matriarch.” Friends quickly jumped on board to contribute because “somehow we have come to that time in our lives when all the parents are gone,” Smith writes. “Who are we now, without her?”

Each writer came up with answers as unique as the women themselves. Raleigh-based writer Elaine Neil Orr shares that her mother, a Southern Baptist missionary, “composed herself like a queen” on their long drives when her family lived in Nigeria. Hillsborough-based writer, Jill McCorkle, marvels at the long hours her mother worked as a secretary for more than 30 years, noting that she “never felt slighted in the least.” The idea of a typical Southern mother quickly disappears as we read about the heartaches, joys, and struggles of these diverse women.

As Serageldin writes, “Our contributors discovered much about their mothers, but perhaps even more about themselves.” — Cate Lineberry