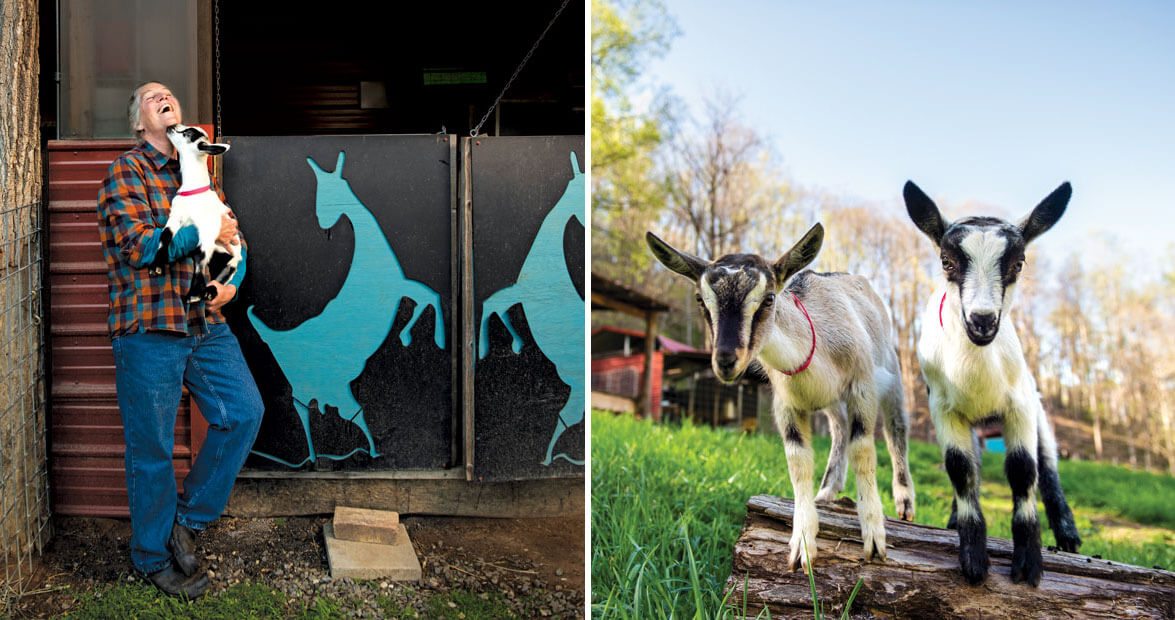 There’s a snake in Jackie Palmer’s greenhouse, recovering from surgery. It isn’t a pet, but Jackie feels responsible for the convalescing beast. Jackie was, after all, the one who left the egg-shaped gourds in the chicken coop to encourage the hens to lay in a new nest. And so she was also the one who later scooped up the lethargic snake, plumped by an undigestible, egg-like gourd, and drove it to a vet in Sylva. “She’s a part of this community,” Jackie says about the snake with three layers of sutures.

Jackie isn’t in the business of reptile rehab. She’s a goat farmer in Caney Fork. But she and her husband, David Smith, live their lives to leave the smallest possible footprint on their 80 wooded acres in the Smokies.

“Everybody here works,” she says. The dogs fend off the coyotes; the bees pollinate the flowers; the chickens lay the eggs; the snakes eat the mice; and the goats make the milk that becomes the 4,000 pounds of chèvre sold in restaurants and shops across western North Carolina every year. 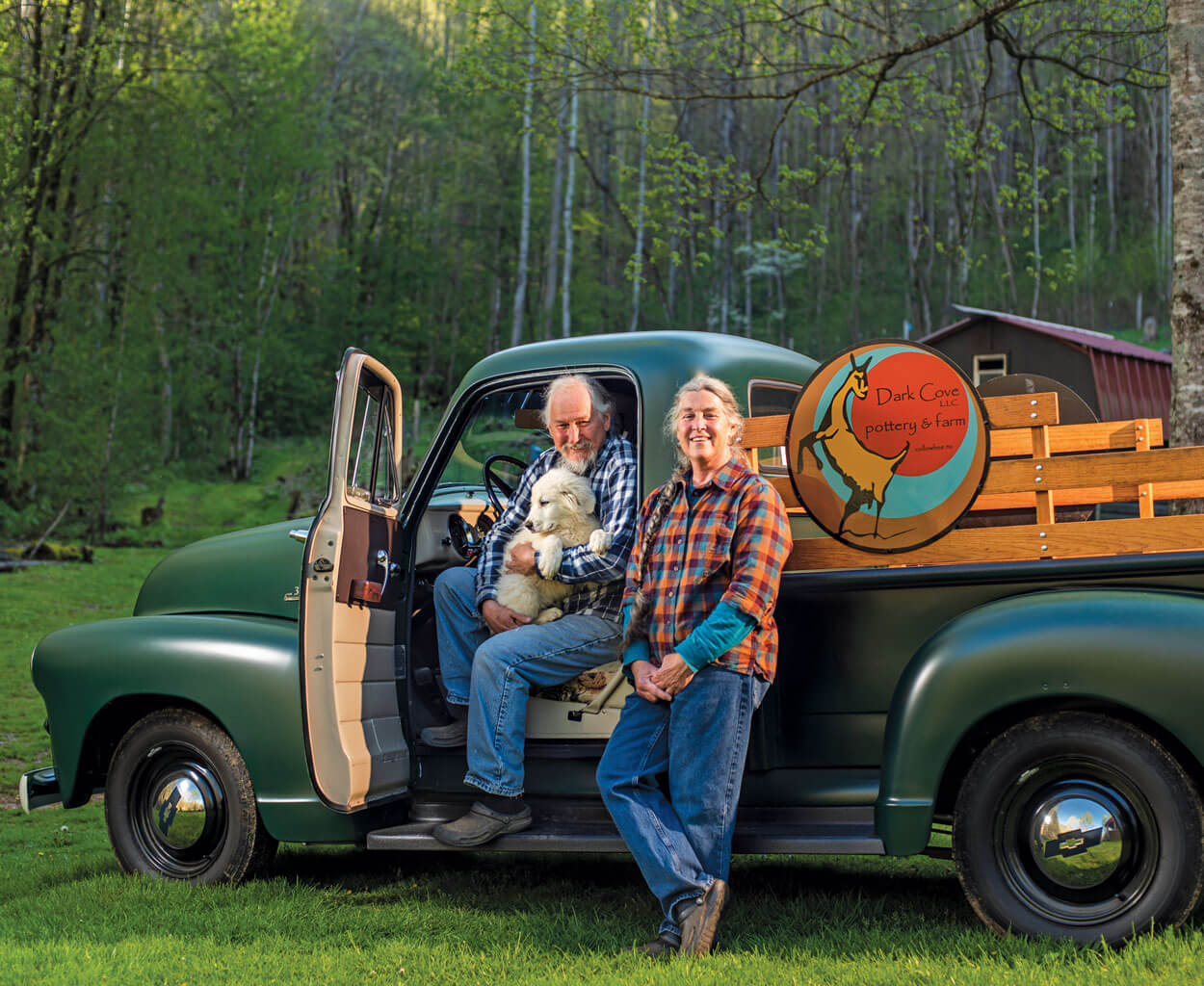 Jackie Palmer and David Smith have a trusty assistant in their Great Pyrenees puppy, Avalanche, and a trusty 1954 Chevrolet pickup — named Rosie — which you can spy at the Jackson County Farmers Market in Sylva. photograph by Jack Sorokin

Jackie never intended to be a goat farmer. She set out to be a scientist. And she became one. She secured a prestigious fellowship and earned a PhD in biology from Harvard before returning to her undergraduate alma mater, Western Carolina University, to start her career.

But Jackie never felt comfortable in academia. “My relationship to the natural world is just really different from what I found in straight academics,” she says. What drew Jackie to the sciences as a young person was a sense of awe.

She studied biology to better see — to observe the hidden worlds and small miracles surrounding us every day. But what she often found in labs was what she calls “control-based science”: researchers making changes to the world and watching what happens. Jackie became protective of the creatures in her labs. “I’m not a mush,” she says, “but I’d rather watch them than torque them.”

One day, she gave it up and went outside. Now, she wakes up early, calls to the animals, and won’t go back indoors until sundown.

It’s easy to see why this place is called Dark Cove Farm. The various outbuildings — the barn and chicken coop and pottery shed and cheese plant and retrofitted Airstream trailer — back into ever-rising, north-facing forest. In the winter, the cove sees only a few hours of direct sunlight. To bounce along the winding dirt road to the farm is to arrive in a world unto itself, land with its own watershed and climate.

Jackie and David bought the place in the 1990s, and their dream has always been to live on and with it — to be a part of a self-sustaining ecosystem. The property had been heavily timbered a few decades prior, so they worked with a forester to develop a forest management plan when they moved in. “We placed restrictions on ourselves,” Jackie says.

This means that with every change they make — from clearing a patch of forest to felling a single tree — they must consider the cove’s wider community. Every decision follows a trail, like that old Irish folk song: … and the egg in the nest; nest on the twig; twig on the branch; branch on the limb; limb on the tree … Cutting a sourwood tree changes the world of the bees; harvesting wood near one of the 22 springs on the property trickles down to the trout.

The truth is, Dark Cove Farm is really in the business of caring for its forest. It produces goat cheese and honey and eggs and pottery and soap and trout, but its real aim is to reanimate this land, to bring the cove into its fullest life.

But it’s a long game: “If we follow this plan — or if the next generation follows this plan,” Jackie, now 63, says, “we’ll have an absolutely gorgeous mature forest back here someday.”

Until that day, she makes cheese. 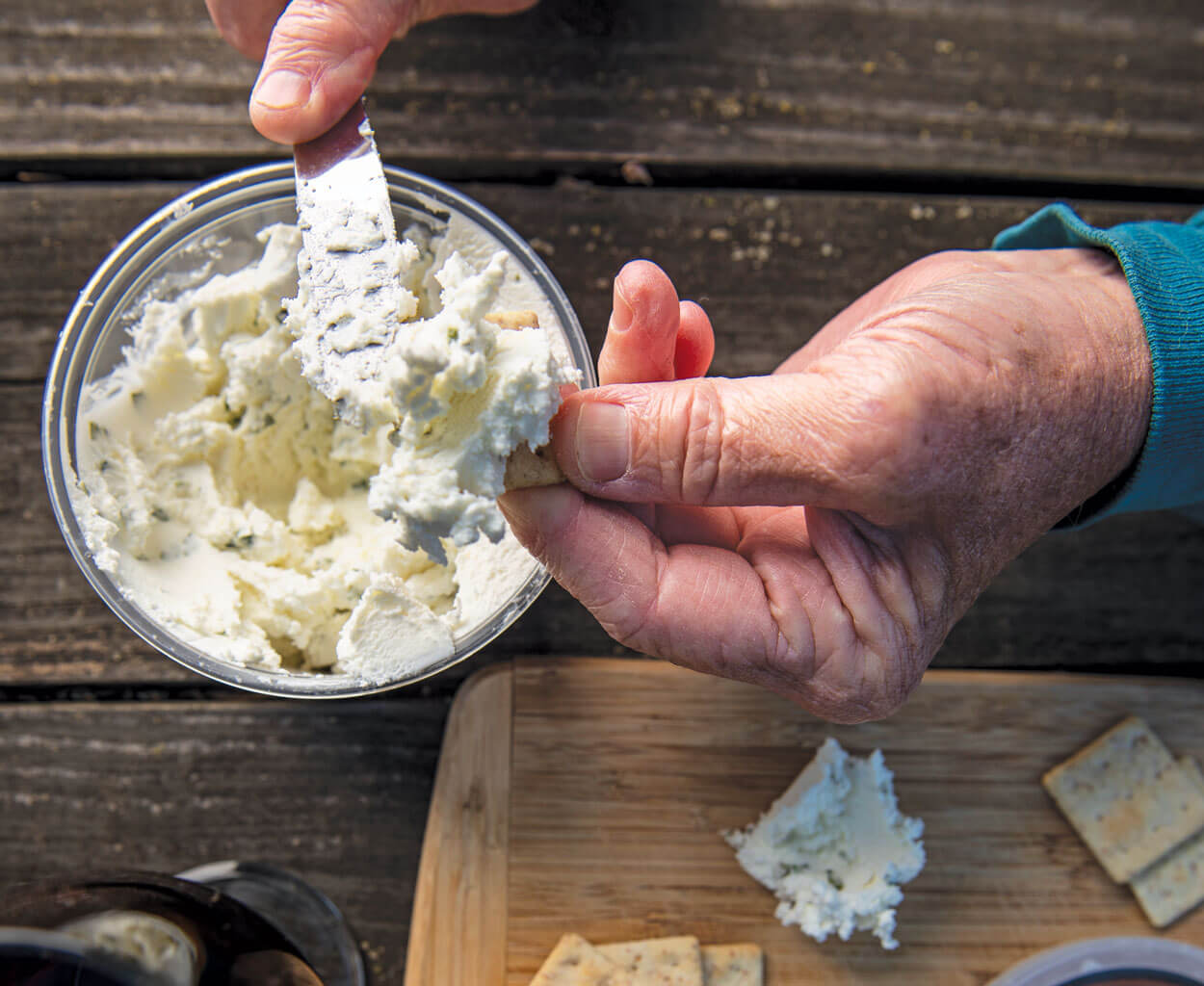 Jackie Palmer doesn’t just make chèvre; she’s also a huge fan. “You can mix anything you like into the plain cheese — herbs, nuts, fruit — but my very favorite mix is fresh, raw garlic and chives. That’s the only mix I make,” she says. photograph by Jack Sorokin

Up the hill from the barn, Magpie, Bonnie, Kudzu, and the other goats eat dried kelp and dried granulated carrots and dried brewer’s yeast. This, I’m told, is five-star dining for goats. But this feast isn’t only for them; it’s also for us. What they eat — like the egg in the nest and the nest on the twig — flavors the cheese that Dark Cove sells.

The truth is, Dark Cove Farm is really in the business of its forest.

In the cheese house beside the barn, Jackie turns the milk she collects twice a day from Magpie and Bonnie and the girls into a mild, unripened chèvre. Lulu’s on Main, down the road in Sylva, will mix it with grilled portobello mushrooms and pesto. The Orchard, in Cashiers, serves it atop vegetable risotto. You might spread yours on bread tonight or, if you’re daring, use it instead of cream cheese.

The dairy started small more than two decades ago, when Jackie and David ushered a few goats into a three-sided shed they’d built with timber from the cove, boards they’d cut on a portable sawmill.

The whole operation is bigger now — they deliver cheese to places from Highlands to Waynesville — but they don’t intend to expand much more. E.F. Schumacher’s book Small Is Beautiful shaped Jackie’s worldview as a college student, and 45 years later, she lives out that vision on a quiet, healing piece of land in the mountains. She and David — and their Alpine goats and Great Pyrenees dogs and stitched-up black snake named Cleopatra — have settled in so that this tucked-away cove can become a self-sufficient community. And, luckily for us, this community just so happens to share.