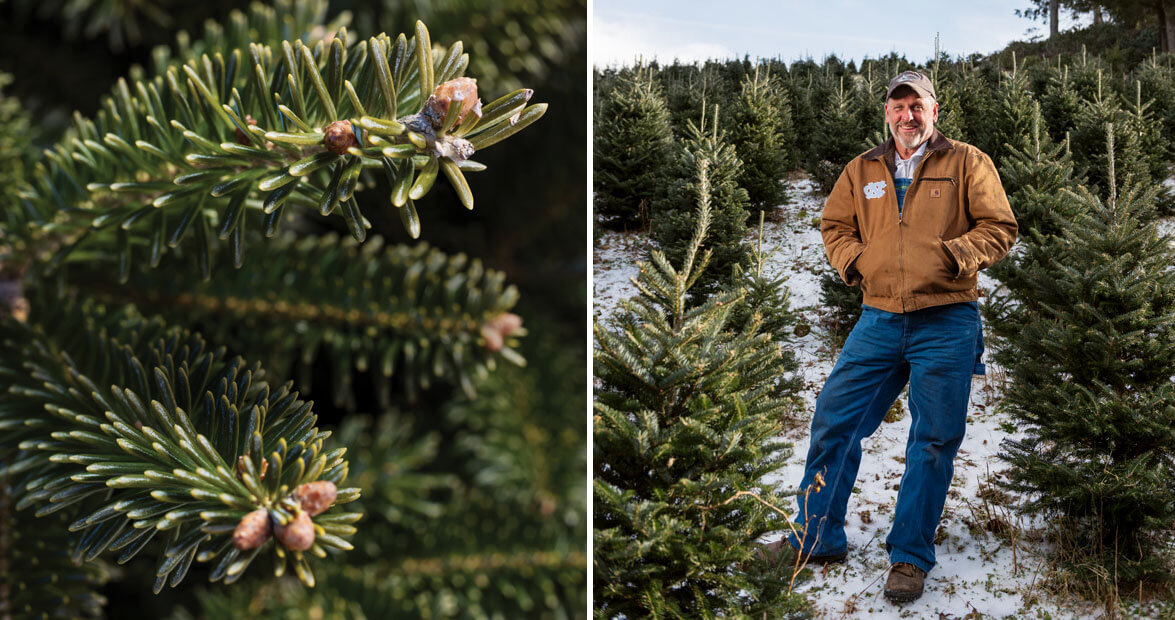 Larry Smith is picking out Christmas trees in the heat of summer. While his neighbors are planning Fourth of July cookouts, he’s in a field, fretting over the way a certain limb might handle the weight of an heirloom ornament. Because for Larry, Christmas trees don’t just conjure wintry High Country scenes. They symbolize the foggy days of fall and the heat waves of summer. They’re as much birdsong as they are the hush of snow. In spring, he’s planting. In summer, he’s trimming. In fall, he’s harvesting. The tasks are never-ending.

Today, Larry is tagging branches to designate which plants will be cut during the upcoming harvest season. The river-cane measuring stick he’s holding makes him look more like a wizard in overalls than a Christmas tree farmer. Brightly colored ticker tape flies as he holds his river-cane staff up to a Fraser fir to see how it should be marked. “Number two grade,” he says.

Months from now, Larry will pull trees from fields that stretch across Avery County, each patch of land identified by a particular name and story: There’s Preacher’s Field, known as such because a Presbyterian minister once lived nearby. Big Rock Field, named for a landscape feature. And everyone’s favorite to moan about, Goat Hill, a field so steep that a farmer can hardly stand up straight in it.

Blaine Legg, a fieldhand new to farming, shakes his head every time he hears mention of Goat Hill. “Lots of trees have rolled down the hill over there, I hear,” he says. “And all of Larry’s fields have a truck-got-stuck story. I like that he gives the land names. It brings in the culture of a place. The stories wouldn’t have the same sort of feel if somebody said, ‘Hey, remember that time over in Block 38 …’”

The plot that he and Larry are standing in, Driveway Field, flanks the gravel road leading to Larry’s house. It’s fitting that many of Larry’s trees grow close to his homeplace, since nearly all of his employees are family. Those who aren’t blood relatives are people with intimate knowledge of the region. It’s something Blaine appreciates. “Larry cares about supporting local people,” he says. “To him, it’s not just about numbers.”

With roughly 45,000 trees in the ground, Larry is one of Avery County’s smaller professional growers. Still, Blaine doesn’t see how his boss keeps up with his live inventory, because Larry doesn’t make spreadsheets. Instead, he keeps the information in his head and written out in longhand. He knows his property right down to the individual trees. They each have a personality, and he’s never wanted to grow his operation past the point of what he can recall by memory. “More trees means more trucks, more people, more stress,” he says. “That’s not what I wanted to do or where I wanted to go with things.” 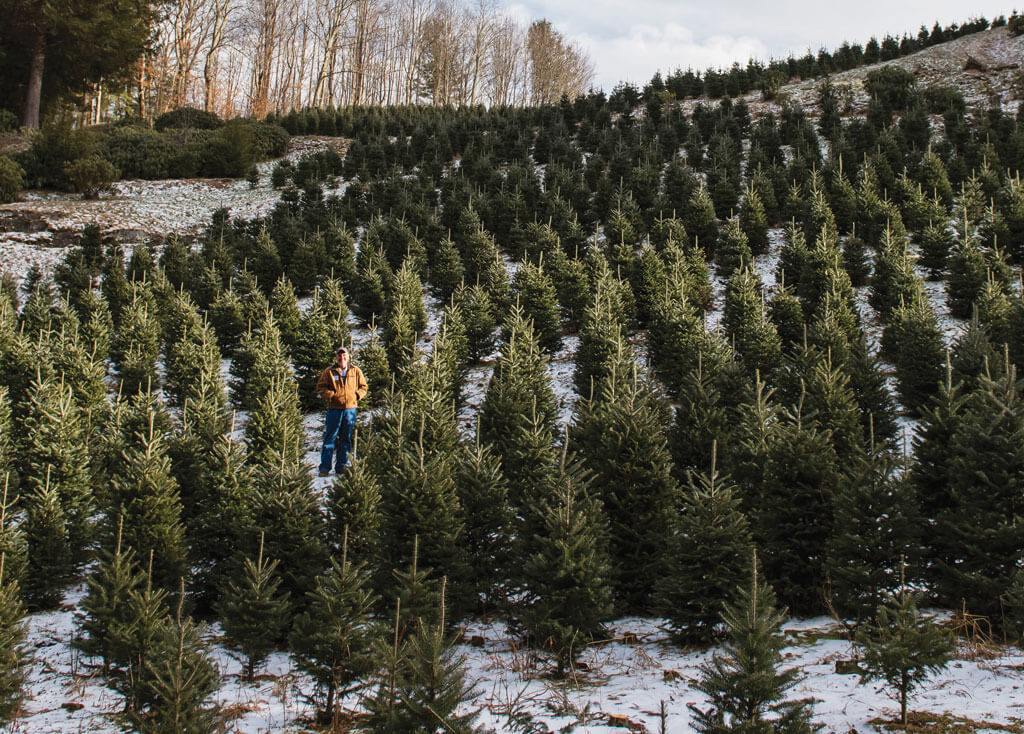 Larry Smith is as low-tech as they come: no email, no smartphone, no social media. His trees keep him connected to his community. “Less is more,” he says. “I keep things simple.” photograph by Jack Sorokin

Larry was in high school when a football coach introduced him to Christmas tree farming. Forty years later, he’s more interested in the National Christmas Tree contest — which selects the tree that will go in the Blue Room of the White House — than competitive sports. “It’s the Super Bowl of Christmas tree growing,” he says. Farmers who’ve won competitions at the state level come from all over the country with samples of their best trees to present at the national event. At last year’s contest, Larry’s entry tree was the Grand Champion, which means that he’ll be supplying the 2018 White House tree.

Western North Carolina provides nearly 20 percent of the country’s Christmas trees. The vast majority are Fraser firs, and nearly all of them can trace their lineage back to Roan Mountain. Early on, that’s where trees were cut in the wild and delivered by zip line. Later, industrious farmers were given allotments to pull seedlings.

Larry’s family has lived in the shadow of Roan Mountain for at least five generations on both sides. In a hard economy, his parents moved off the mountain for work. Larry spent his childhood in Lenoir, but as a teenager, he returned to Avery County. Back then, in the 1970s, Christmas tree farming was still a relatively new industry. Larry’s grandfather let him plant his first trees in front of his farmhouse, even though he was a little confused by his grandson’s plans. “He’d worked to clear big timber from hillsides, and I was setting trees back up in the fields,” Larry says, shaking his head.

From the outside, it looked to his grandfather like Larry was moving backward. But to Larry’s mind, planting a crop that takes up to nine years to mature has always been about looking ahead — toward harvest seasons, and to what might be left for future generations.

Larry steps over snaking vines. Evergreen scrubs him from all sides, like car-wash brushes. His son Wally and brother Lynn are scheduled to arrive at the field soon. Then, the men can start shearing, a process of trimming the trees so that they’ll grow into the tapered shapes customers expect. Larry and Blaine sit down to wait. The ground between the trees is covered in moss and native flora that pushes up between rows. “That’s milkweed,” Larry says, pointing to a hardy weed that’s just begun to bloom. “Monarchs use that to help make their migration to Mexico.”

Larry pays attention when he hears people talking about the butterflies’ annual journey across North America to Mexico, where the species spends the winter. He worries when their numbers drop because of early frost. Those long-distance travelers are underdogs, and, as a farmer, he can sympathize with that. “This isn’t an easy business to be in,” he says. “Not everybody would want to do it. But, personally, I can’t imagine doing anything else.”

In a few months, the trees he’s marked will leave the mountain, color-coded ribbons fluttering like butterfly wings. They’ll mostly go to homes and businesses down around Lenoir, where he runs the Mountain Top Fraser Fir Christmas Tree retail lot. But all year, in the back of his mind, he’s been thinking about that special, yet-to-be-identified tree among them that will be traveling to Washington, D.C.

Larry doesn’t use a computer. He doesn’t have an email account or a smartphone. When he needs a weather report, he calls Wally. When he wants a photo of something, Blaine takes one. When he needs a phone number that isn’t in the battered briefcase he keeps behind his truck seat, he asks Lynn to look it up. Even though Larry lives his life unplugged, he is all about connectivity. It’s something he cultivates, right alongside his trees.

When Lynn and Wally show up in Driveway Field, they’re holding knives the length of ninja swords, and the men start work immediately. Trimming the trees is a laborious process that Larry doesn’t like undertaking alone. But he enjoys it when he’s got friends and family in the field with him. Everyone who uses a shearing blade has a different style, a signature written with the flick of a wrist. Wally tends to trim the trees tightly, leaving little new growth. Lynn is looser with his cuts, preferring rounded fullness. And Larry, who is left-handed, has the lightest touch. 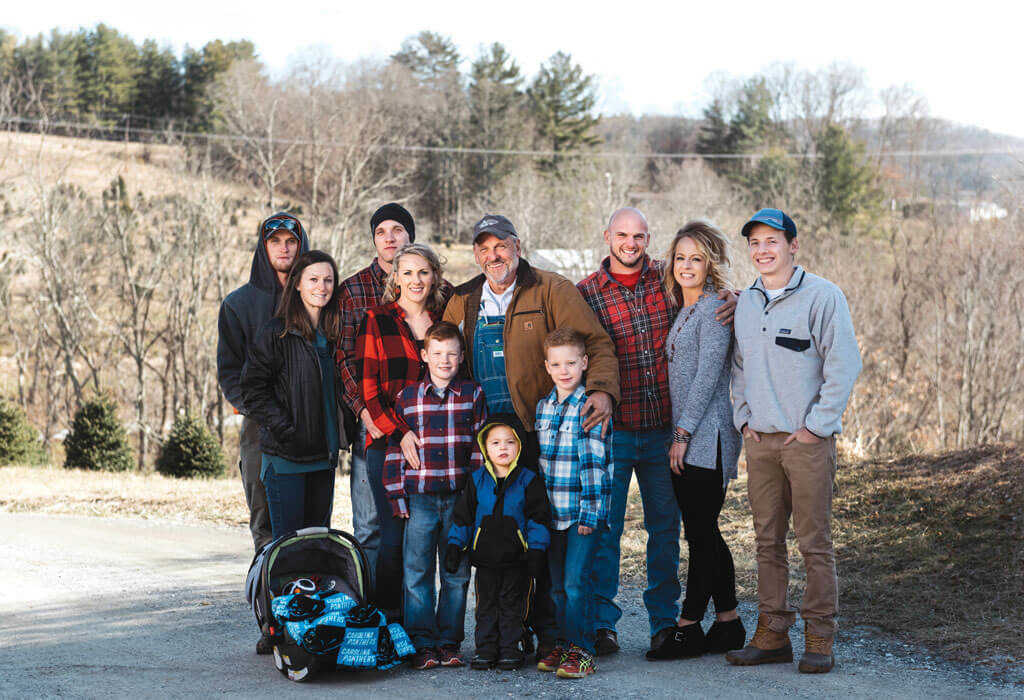 Tending the 45,000 trees in Larry’s fields is a family affair for his three sons, their wives, and their children. Back row from left: Wally, Jessica, Andrew, Cristin, Larry, Stephen, and Sara Smith, and grandson Tyler White. Front row: Carter (in carrier), Gabe, Brody, and Sam. photograph by Jack Sorokin

The men trace the outlines of the trees they’re working, bits of evergreen flying. With each sweep of the arm, resin is released with a clean scent. Soon, the branches will heal themselves, white scars forming at their tips. When competing, Larry often helps the process along by putting bits of dirt on the whitened ends, an earthen sort of makeup that makes human influence less noticeable.

With his brother on his left and his son to his right, Larry says, “I like getting everybody in the field because nobody’s got their face to their phone out here. We spend time together when we otherwise wouldn’t.”

Always, Larry is looking for ways to bring people together, and trees are often part of his scheming. “I keep up with old friends by spending time on the Christmas tree lot instead of getting on Facebook. The same people come every year,” he says. “I think of trees as a crop like soybeans or corn, but we’re also growing memories out here. Who doesn’t take pictures of the family in front of their tree when they’re opening presents?”

Since he isn’t on social media, he doesn’t see the pictures of his trees lit up in living rooms. He’d rather spend time walking his fields or driving the back roads of Avery County, where he subscribes to the old-fashioned notion that porches are made for spontaneous visiting. “Some people want to retire, but I already do what I want, when I want, where I want,” he says. “Farming has given me just what I need — even exercise.” He comically flexes his bicep. “By the end of the season, my left arm will be a lot bigger than it is now,” he says.

Larry shapes his trees, and the trees, in return, shape him.

The Smith men chat as they cut, trying to guess which tree will make it to D.C. There’s a contender in Lower Propane Field. Another in Behind House Field. There’s even one perched on Goat Hill. A government official will ultimately choose which towering Fraser fir will serve as the national tree. But out of the tens of thousands that are growing on Larry’s patchwork of land, there are only a handful that are large enough to work. While other trees were being anointed for sale lots and competitions, these are the ones that were left behind. Not because they were potential winners, but because — during previous tagging seasons — they were deemed the least desirable. 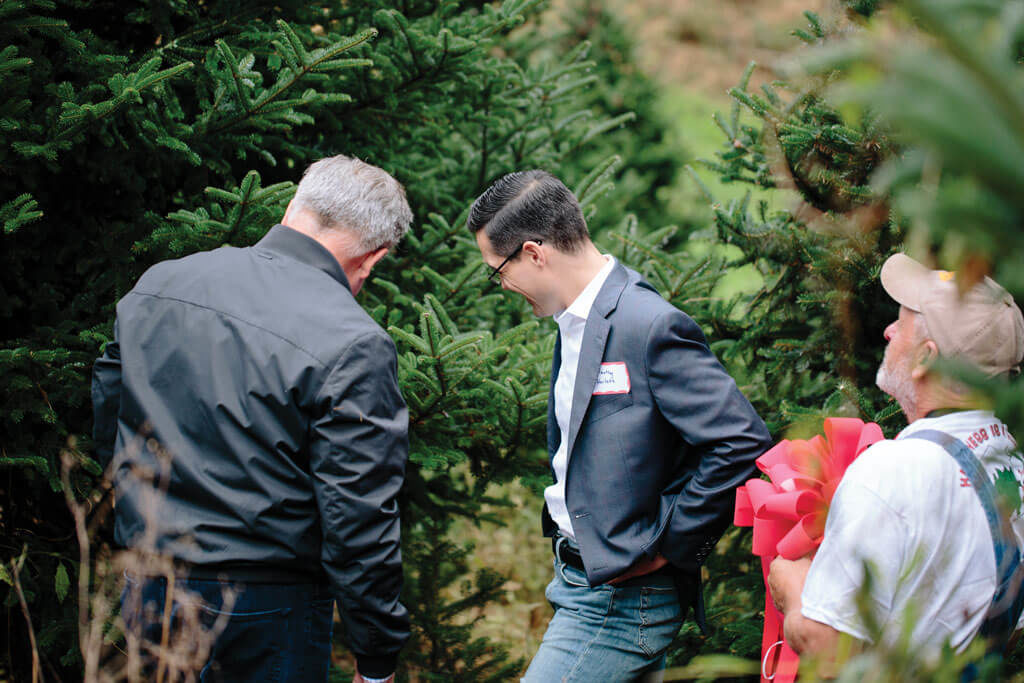 Season after season, for more than 25 years, they were overlooked, which is precisely how they were able to transform into the most impressive trees in Avery County. “Given enough time and space,” Larry says, “any tree could turn out to be the perfect one.”