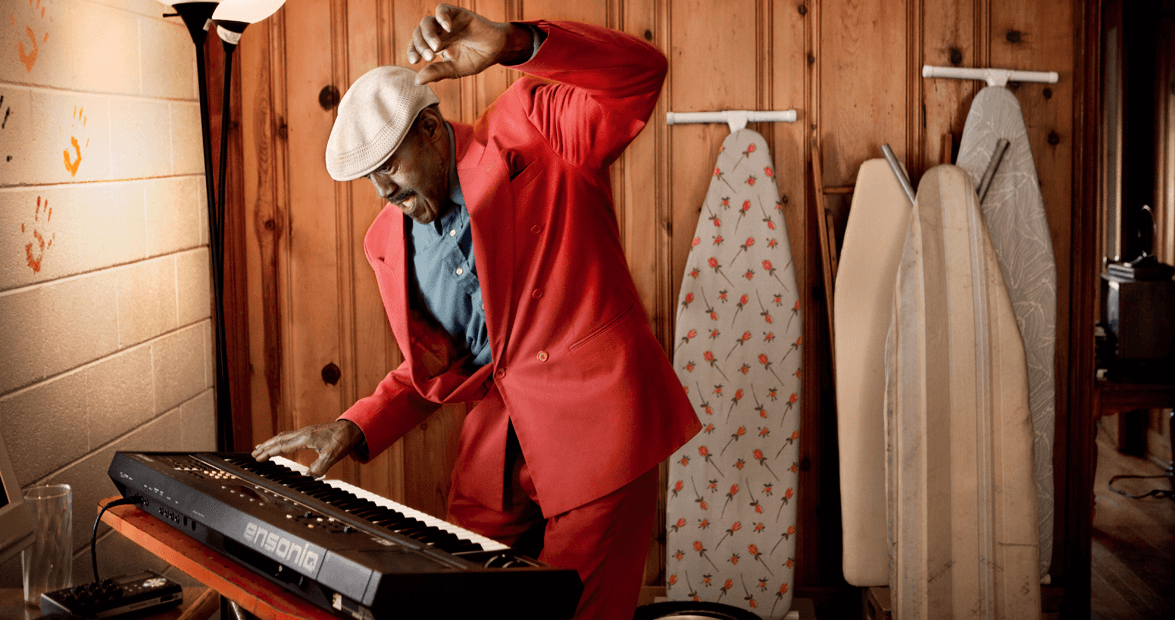 Ironing Board Sam is a handsome man with a flashing smile who carries more than a thousand tunes in his head. At the Music Maker Relief Foundation in Hillsborough — as plain-looking as any insurance bureau except for the still parade of life-size cardboard cutouts of musicians — he’s telling his story.

As a toddler in Rock Hill, South Carolina, his sick mother would sit him up at their old piano and let him bang away at the keys to keep him occupied. And when she lay dying in her bedroom, that’s what he was doing. He was too young to remember any last words she might have spoken, but he’d always remember the sound of her voice whispering, “Sam, always do the right thing.”

Starting at age 14, for more than 50 years, the right thing was music. Sam’s repertoire is broad and deep: classic blues; soaring electric R&B; playful, syncopated funk. He mounted his first portable organ on an ironing board for a gig in Miami in the 1950s, earning the moniker “Ironing Board Sam.”

Later, as he moved between Memphis, Chicago, and Los Angeles, he concocted his signature “button board.” The top keys struck guitar strings that ran through a wah-wah pedal into his amp. The bass keys were really 60 upholstery tacks, each a contact point for an electronic sensor. Through a live wire running down his sleeve, he could complete the circuit, sounding like a Hammond B-3 organ, an electric guitar, or a piano. Headlining as “The Eighth Wonder of the World” in New Orleans, he strapped his keyboard over his shoulder and played for hours.

But after all those gigs, he wound up back in South Carolina, broke, with fading eyesight and failing teeth, a forgotten talent facing old age without prospects.

Then the Music Maker Relief Foundation took him into its stable of musicians and helped him get the dental and medical care he needed, including eyeglasses. Fixed his car; bought him a new “ironing board”; financed his move to Chapel Hill; recorded his music; and set him up with gigs locally, around the state, and as far afield as the New Orleans Jazz & Heritage Festival.

Since 1994, Music Maker Relief Foundation founders Tim and Denise Duffy and their crew have recorded more than 300 musicians on more than 150 albums. They’ve paid electric and medical bills, bought food, covered rent, purchased instruments — all for a cadre of artists living on only a few thousand dollars a year. Music Maker artists have entertained more than a million fans at live shows in 40 states and 17 countries, as far away as Australia.

Tim started out with the Appalachian Music Crew at Warren Wilson College, documenting musicians who carry on a long tradition of performing. Later, living in Kenya with his future wife, Denise, he saw how extreme poverty can ravage a culture. They returned to North Carolina determined to help traditional musicians living on the edge of poverty.

“In the beginning, working-class people invented the greatest, most valuable export of our nation: blues, jazz,” he says. “It defines who we are as a people — how we talk, the religious ways, the folkways.”

Denise says, “The senior artists, their musical heritage was given to them by uncles and fathers and mothers. They carried it with them, and they all feel a tremendous responsibility to pass it on. They love working with younger musicians, teaching them the different styles — on the porch, the way they learned.”

And playing onstage again for blues fans? Sam smiles and says, “It feels good. That’s my life. It heals me.”