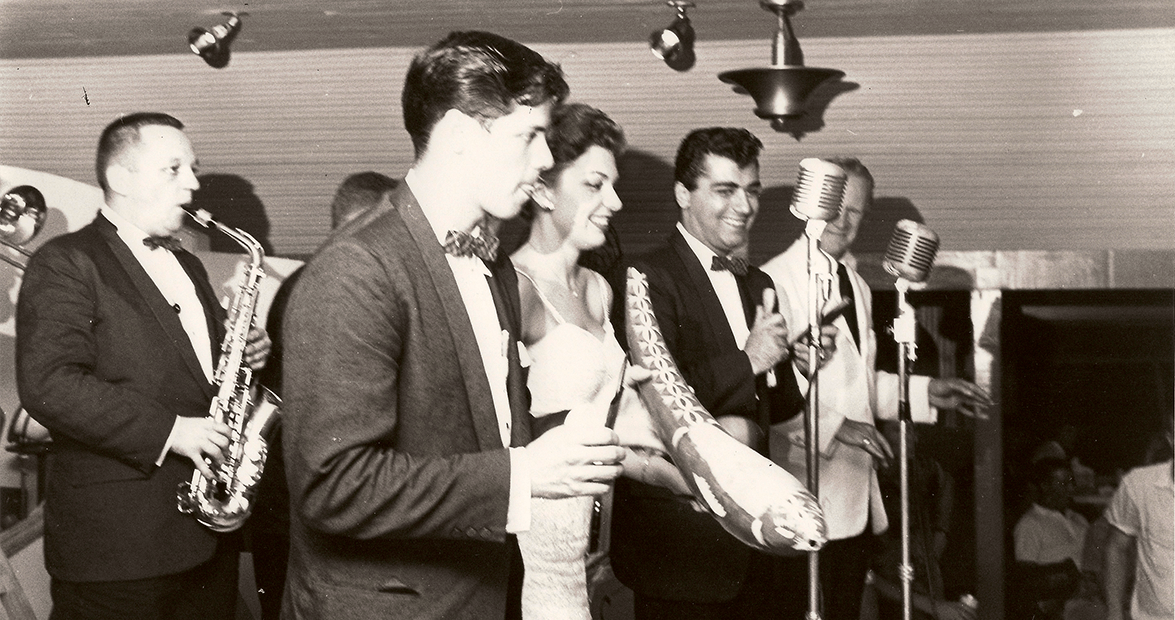 Helen Gaskins cried nearly every day when she left Manteo for college in Norfolk, Virginia, in 1943. At the end of the school year, she told her roommate: “I can’t stay here. I just have to have one more summer at the Casino.”

Anytime you talk about the past on the Outer Banks, the conversation inevitably rolls around to the Nags Head Casino. Open from 1937 through the early 1970s, it was the preferred place to be on a summer night for at least 35 years. The Casino, which sat on N.C. Highway 12 near Jockey’s Ridge, drew not only locals and vacationers but also music lovers from all over eastern North Carolina and Tidewater Virginia, who did whatever it took to get to the dance hall on the dunes.

Musical acts didn’t mind making the trip, either. Some of the biggest names in popular music navigated their buses along back roads and across wooden bridges to play in the Nags Head nightclub — Artie Shaw, Sammy Kaye, Duke Ellington, Woody Herman, Glenn Miller, Guy Lombardo, Tommy Dorsey, Fats Domino, Louis Armstrong, The Platters, Bill Deal and the Rhondels, The Temptations, The Four Tops, The Tams, The Drifters, and Maurice Williams and The Zodiacs among them.

No shoes, no ponytails

Built as a barracks in the early 1930s for the stonemasons who constructed the Wright Brothers National Memorial, the cavernous, two-story building housed 13 bowling alleys, plus pool tables, games, and a snack bar downstairs. Upstairs was the dance floor and bar. The top-floor shutters were always propped open with a stick, the summer breezes drifting in and the music drifting out across the Nags Head sands.

The Casino was known for its “barefoot dancers.” Club owner G.T. “Ras” Wescott waxed and buffed his wooden dance floor every day, and he had a policy against shoes. Patrons, including servicemen in uniform, shed their shoes on the way upstairs and spent the rest of the evening gliding across the floor like skaters on ice.

At the Fats Domino show, where the singer reportedly changed the lyrics to “I Found My Thrill on Jockey’s Ridge,” 1,500 or more ecstatic dancers literally rocked the entire building.

Ask just about any Outer Banker older than 50 about the Casino, and they’ll have a stockpile of favorite memories — the boxing matches on Wednesday nights, the fights in the parking lot, the night walks on Jockey’s Ridge and the beach after closing time, rowdy patrons jumping out of the second-floor windows to escape the bouncers, Wescott turning away long-haired surfers because he didn’t like men with ponytails, Miss Delnoy Burrus cutting off said ponytails in the ticket line, Miss Helen Gaskins (who after college, worked summer nights as the Casino’s ticket taker) letting the local boys in for free.

“I knew the boys around here didn’t have much money,” she says. “Everybody wanted to go to the Casino.”

To this day, grown men still thank her for allowing them to have fun at the Casino so long ago.

It was where everyone wanted to be, including Gaskins, during her last summer before college. Just one more night at the Casino.